Welcome to Gaming News for May 5th 2011. Another week down the drain and it seems as if Sony is back on their feet! Dirt3 hit the Steam shelf, its Ubisoft Week on Steam, don't forget about the Midweek Madness and the rest of the news. Ready? Good, lets go!

Who doesn't like when Steam sells games at a discount? This week Ubisoft has put some of their biggest games on that list. I would like to thank Lersar for throwing up this thread that will be updated daily with all the latest games that are on sale. As always make sure that if you see a game that you want to buy it that day. These sales are only good for one day. 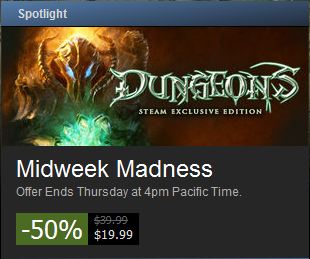 Game one of this week's Midweek Madness is Dungeons. If you don't have this game already now would be a good time to pick it up. When a game is 50% off it certainly grabs my attention. Grab it while its HOT! 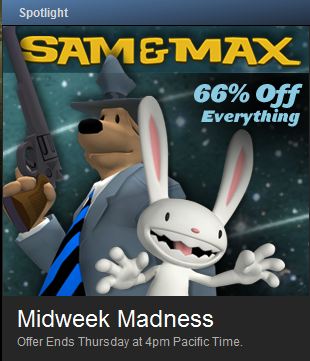 For game 2 this week we have all of the Sam and Max games on sale. If you are missing these from your collection now would be the time to pick them up, and you thought 50% off was good. Hello 66% off, lol.

As always LanOC these sales are only good until Thursday at 7pm EST.

Well, for the folks that like cars, off-road racing and pure mayhem the time has come, Dirt3 is here! From the great minds over at Codemasters Dirt3 is the (you guessed it) 3rd installment in this series. Not a sim racer and by no means an arcade goofy off the wall, Dirt is somewhere in between. I like to say that it's a bit of both aka it tickles all of your senses.

The game is pretty demanding on 5980x1080. Averaging right around 45fps with all the eye candy turned up and AA on 4x. One note for those of you with Eyefinity or Nvidia Surround. Do not touch the aspect ratio. I figured that I would turn it to 16x9, boy that was a mistake. Leave it on Auto and it should be fine. Blasting through a wooded area or out in the open in Kenya Dirt3 looks amazing. A friend of mine was over and he said "The trees look 3D". Lol, take that for what its worth, I thought it was funny. Some of the snowy tracks are some of the most fun. The game is just "WOW" on snow, at night, from the cockpit view. The first race in this situation I was literally floored. The headlight effects are just stunning in Dirt3.

This is a screenshot that I took before one of the rally stages in the game. The dot right in the middle of the screen is the map but since I had to shrink the picture way down it looks a bit funky. There are 5 different camera views that are availble. The pic above is the roof cam. The cockpit view by far is the best but the hardest to drive with.

I will say that the driving is spot on. All of the cars feel right and handle good. I wish there was a difficulty setting in between where I am. It's either too hard and I get tank slappers or if I knock it down a notch it becomes too easy and I pass everyone without to much trouble. I will say that the older cars seem to be a bit more fun than the newer ones, not what I was expecting.

This is a shot showing the detail of one of the cars. This is probably one of my all time favorite cars, a Ford Escort Cosworth. Codemasters has really done a great job with all of the vehicle models in the game.

I am about done with the first stage in Dirt3. I am up to driver level 7 and I don't plan on stopping. If there is one bad point about the game is that it uses GFWL. I was plenty pissed off when I fired up the game and I saw this. Every game that uses GFWL says so in the game requirements list on the bottom of the Steam page. This time it wasn't there so I didn't think about it. It's now under 3rd Party DRM which is on the right hand side on the bottom. I will have to watch for this from now on but I wanted to give y'all a heads up.

I can't give Dirt3 enough praise. Codemasters really did a great job with the Dirt series and I will be coming back four forths, lol.

Seems if Sony is back on their feet with the PSN, glad to see too. Their not outta hot water yet though. If its not one thing then its the other. Looks like Sony pissed off a whole bunch of people cause the hacking is continuing. If I can count right four of their sites have now been DDos'ed. I am just glad that i'm not on the recieving end of that stick.

What do you think of the Steam daily deals LanOC? Is it a good thing? Will it make you pick up games that you haven't though of? If Farming Simulator goes on sale I will pick it up, lol.

The COD:MW3 trailer launched yesterday and agin our great LanOC member Dreyvas came through for us again, for the second week in a row. The trailer can be found here.

The COD:Black Ops map pack Escalation is now for pre-order on Steam for 10% off.

Our weekly LanOC Gaming Nights are still on Wednesday and Friday. Please come out and make your voice heard on our Vent channel. I know that its been harder now that the weather is nice out but atleast try and make one of them.

That is it LanOC. Another edition of Gaming News is done.

Should be an interesting weekend with the Indianapolis 500 on Sunday and the Formula 1 race in Monaco. Two of the best races of the year on one weekend.

Have a great week of gaming everyone. Wingless is out!