Summertime is here everyone, time to get out of the house and enjoy some nice weather. Who am I kidding? Stay inside, sit on your favorite chair and game. Ah, forget it, its Wednesday and that means Gaming News, lets go.
Steam Daily Deals:

On Monday Steam announced their starting daily deals. We used to get the Midweek Madness sale and the Weekend Deal but Steam just one upped the other digital distribution services with this latest announcement. What does this mean for Gaming News? Well it makes my job much harder. I will post up a thread in the news section stating what the day's deal is. If you want to get it even faster "Like" them on Facebook or follow them on Twitter @steam_games. That way you'll always be in the know of whats going on. I would like to thank LanOC member Dreyvas for creating the thread on this. Hopefully they will put some of the more obscure games up for sale.

So not one but two games this week are featured in the Midweek Madness sale. First off we have Worms Reloaded 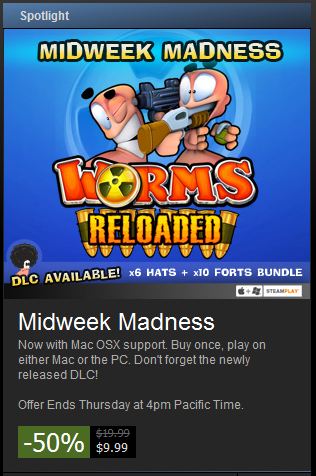 Who doesn't like a friendly game of Worms? I know that this has been featured at some of our past LAN's and now would be a good time to pick it up. You can't go wrong with this game. For $10 it's a no brainer.

For the second game we have Singularity

I have not yet played Singularity but I plan on picking it up for this price. Using time as your weapon seems like a fun mechanic. Looking over at the metacritic scores their not the highest i've seen, then again thier not the lowest either.

Either way you have until Thursday night at 7pm EST to decide if either of the games fit your style. Don't be like J_E_R_O_M_E and not pick it up and then regret it later.

The new Medal Of Honor was on sale during the EA week on Steam. I was hesitant to pick it up when it first came out and I'm glad that I waited. Was it the COD killer that it was trying to be? No, but that doesn't mean that it didn't do things that we're fun or mechanics that we're new either. One of the objectives was to call in A-10C Warthog's and do bombing runs. I am guessing this was to "one up" the guys from COD4 with the mission "Death From Above". That is still one of my favorite missions in all of gaming.

MoH did run pretty darn good on the ol' gaming rig. Nvidia Surround was no problem, just set the resolution and I was on my marry way. I think that they locked the framerate even with V-Sync off at 62. Not sure if this can be unlocked but it proved to not be a problem for me.

As of right now I have not spent that much time in the multiplayer. It does look better than the single player because of the different engines that are being used but overall the game looks good. By no means is this game a system killer, you are not going to need some high end stuff to play on.

I am just glad that I saw that it was on sale and that I had some time to finish the game. Hopefully they will work on more MoH's in the future. In the future if you see this on sale pick it up. It's worth the small entry fee for a fun game.

Well the PSN is back up and running. All systems are not go though. Not all of the features are running yet here in the US and government of Japan has not allowed Sony to turn it back on yet. This whole hackery is just been a nightmare for Sony. Speaking with some of the other staff one of the biggest points that was brought up was how many people are going to keep buying products off of the store? Who would want to use their credit card there now? I am pretty sure that we are going to see a rise in PSN card sales here very soon. Another quick note, for those of you that want that free month of PSN+ remember, you have to enter your credit card information before you can use it. Talk about a kick in the junk. Thanks again Sony. I know it wasn't your fault but it turned out to be. Remember to claim your free games ASAP. The download will expire in 30 days! Thanks to Ars for the great article.

Well team that is it for this weeks Gaming News. I sure hope Sony will turn things around. Keep an eye out for the Steam Daily Deals and remember, LanOC gaming nights are on Wednesday and Friday nights. Hop in Vent with the staff and other members of our community.

Thanks everyone and have a great week of gaming. Wingless is out!

This is getting pathetic.

Lersar replied the topic: #15771 18 May 2011 21:15
One of my favorite things about the gaming news is that if you follow them, you're going to stay up to date on Steam sales, and particularly which ones will benefit you most at the LAN.

That was kinda the idea. Like I have said in the past. If it's not a Blizzard game and its not on Steam, you've already lost my business. Steam is the Xbox live for PC's. Everyone is on it, it's easy, it's free and they have killer deals on games. Simple.

I know that Steam has so many things going on that it's hard to follow them all but that's why i'm here. That and to give previews of games. I hate reviews, we are all grown up, make your decision on a game. That's the way I see it.

Wingless92 replied the topic: #15775 19 May 2011 00:18
Fired up the ol PS3 and updated it. Changed all of the info, name, password, address, deleted my billing info, all of it gone. Then, formatted the HDD to erase everything on it. I think that was the first time it's been on in over 8 months. It is not only a blu-ray player and that is it. Kinda sad really.
Read More...

We have 594 guests and one member online