Welcome back to Gaming News, sorry I was off last week. With it being the week of finals I hope it was a good excuse. So, Brink just dropped, we have the Steam Midweek Madness sale and whole boat load of news for this week. Hop on board parter, Gaming News starts now!
Midweek Madness:

Well, if you are one for Strategy games then this week is your week. How about 17 games for $29.99? I can say that I own Tropico 3 and the DLC and have had some fun with them. Remember, all Midweek Madness sales end on Thursday's at 7pm EST! Get them while there hot. 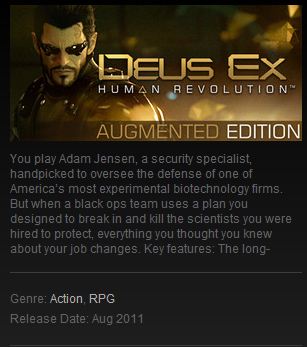 Everybody ready for the next Deus Ex? Steam has the Pre-order page up now. If this game is on your radar you might as well pre-order it and get on the 10% savings. No need to mess around, saving cash, is saving cash. 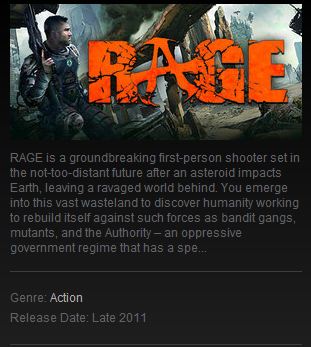 Rage has been released for pre-order on Steam. Although you won't save any cash, you can get it on your list.  The system requirements aren't on the Steam page yet either. Just a heads up to everyone, more or less. 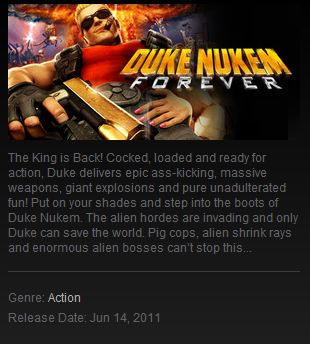 Lots of pre-order stuff this week, Duke Nukem Forever has their page up on Steam. Pre-orders save 10% off the game. Looking at the specs it doesn't seem like its going to be a system killer. A Core2Duo/Athlon 64 X2, 2GB RAM and 8800 GTS/ Radeon 3850 is what the recommended hardware is to play. Seems easy enough.

For those of you that are running AMD GPU's head on over to Steam and update to the lastest drivers from AMD, 11.5. Looks like there is a couple of new enhancements for you Eyefinity configuration. Remember, old drivers are bad drivers.

Remember to keep your games updated. With the new recording option in TF2 and the new updates to Portal 2 there is no reason to forget about it. Also if you haven't done so already, make sure that your games are set to update automatically. This way whenever you want to play your ready to go, especially good for LAN's.

Well I must admit that I fell really stupid right about now. I was the one that said "I will not be buying this game on launch day." Looks like i'll be eating my words right about now. Brink is a funny game to say the least. Most people will think that its a TF2 clone, just like every other Team Based FPS. This is not even close. The game runs awful on my machine, we'll get to that later. And how about the online? What does it play like, how does it feel? Any weird quirks? Read on to find out.

So just like every Team Based FPS it is called a TF2 clone. This is so far from the truth that it's quite possibly the funniest thing that I have heard in a long time. This has some resemblence but not much. Sure, there are different classes to choose from but that's about where it stops. In most games, you'll have to change your class to finish or complete the objective. These objectives could be to guard some sort of intel or escort a robot to a safe zone.

So one of the worst things about the game is that you can knock people down ala Gears of War. The only thing is that you can do this to the whole team. It reminds me of the commercial where "I've fallen and I can't get up." At first it's funny but after awhile it just looks really stupid. The game runs like it was optimized for a NASA. On my main rig it was struggling to hit 50fps in campaign and 40 online. I am not sure if this is a driver issue with Nvidia or coding with the game but it doesn't play well at all.

One of the other weird quirks that I had is that 95% of the sound cut out in one of my multiplayer matches. The gun, voice over and eviroment sounds where not there. Other sounds came through but it was really odd and disconcerting. The online portion of the game, or should I say the entire game has a funky setup. You can play the campaign but it shows up in the server list if you want it to. Why in the hell would it be up there in the first place. If I wanted to play co-op I would have said so. Expect a bunch of mouse clicks to start the game to your liking.

The gameplay is pretty damn cool. The objectives are nicely laid out with a puch of your middle mouse you can bring up the menu and choose which objective that you want to do. In the beginning of the match their maybe as many of five but as you progress these will dwindle as you complete them. You can change objectives at any time if need be also.

The HUD in the game is one of the best. The reloading status on your aiming optics is a great idea that I would like see in more games. It really takes out all of the guess work. I also like the health bar when you are shooting someone. It lets the player know that you are actually doing damage.

There are ideas in this game but they don't make up for the terrible performance of Brink. Hopefully they will be patching the game to make it playable with Nvidia Surround. I'm not sure if Eyefinity works since I am not runnin an AMD card. I know that it's kind of nit picking but people do have three or more monitors and we want to use them. We didn't buy them just to look at them.

I will say one of the strong points is the gun/character customization is one of the best that I have seen. Letting you see what the scope or other add-on for your weapon is a nice change of pace. The character side is just as good. It gives you a very detailed look at what your soldier will look like. Hopefully more games will use this kind of system.

As of right now I would have a hard time recommending this game to anyone. There is just too many things wrong at this point to really make it fun. Stay tuned to Gaming News for future updates about Brink.


Thanks everyone for a great first quarter of Gaming News. I am working on a few new things to bring to you guys/gals over the next couple of months. Hopefully everything will work out as planned.

A quick reminder about LanOC Gaming Nights. They are on Wednesday and Friday nights. I am pretty sure that the Steam annoucement goes out around 9pm EST but don't be afraid to jump on Vent with us or send anyone on Staff a message on steam. Hell, even post on the forums that you are ready to play. We have been playing a bunch of different games over the last couple of weeks.

Thanks everyone and have a happy humpday. That is your Gaming News for this week. Wingless is out!

Leonresevil2 replied the topic: #15680 14 May 2011 06:37
Nice article. Brink was designed for seamless single player/co-op/multiplayer transformation, which is why it behaves oddly like that. I think it's good that people are taking an interest in it, and I will be trying it soon, but I expect the game to be patched up pretty well, especially since they are competing with TF2 in a way.
Read More...

We have 607 guests and one member online