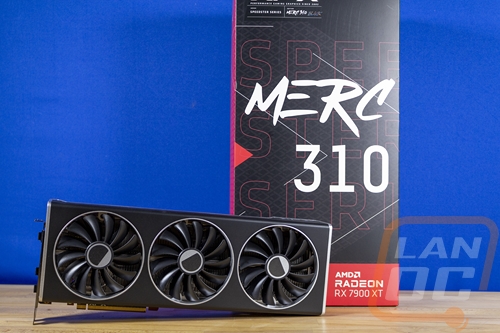 When I first saw pictures of the XFX MERC 310 7900 XT Black Edition I thought that XFX had reused a majority of the cooler design from their last generation of cards but after getting the MERC 310 7900 XT in I was surprised to find that they have changed a lot up. The fan shroud design has the same flat design and is black with silver accents, but outside of that everything has been changed up. This includes the new grooved silver backplate and XFX also dropped some of the extra branding on the top to open up airflow more. The result is a simple design that doesn’t have any of the typical gaming design stereotypes. The MERC 310 7900 XT is a huge card which I feel like an old man yelling at the clouds complaining about card size getting out of control when everyone is doing it at this point.

The MERC 310 7900 XT has a surprisingly big overclock over top of the stock RX 7900 XT that we already covered. This translated to a 1%-3% performance improvement in just about every test which wasn’t enough to make any significant changes but did push the MERC 310 7900 XT out in front of the 4080 in a few situations. Overall though the MERC 310 7900 XT, like with the stock 7900 XT, sits below the RTX 4080 in a category lacking competition from Nvidia right now. What that means is that the MERC 310 7900 XT and the 7900 XT, as a whole, bodies any 1080p or 1440p tests that I put it through, coming out at over 120 FPS in every game at those resolutions no matter the detail level. Even at 4K nothing I threw at it struggled with everything over 60 FPS and a majority were over 120 FPS even still.  Like with AMDs other RDNA 3 cards, ray tracing performance was improved but still has more catching up to do compared to Nvidia and FidelityFX Super Resolution is great but without frame generation, DLSS 3 is still ahead there as well.

The overclock that XFX gave the MERC 310 7900 XT Black Edition did also translate to more power usage with the MERC 310 7900 XT Black Edition averaging 35 more watts than the stock 7900 XT which wasn’t exactly power efficient itself. It also didn’t do well in any of our noise tests, coming in near the top of the charts in all three tests even with the fan RPM being in the middle of our charts. But the cooling performance of the large card was good even with the overclock creating more heat.

As always pricing is key and AMD introduced the RX 7900 XT with a suggested price of $899 which was the cheapest so far of the next generation of cards. Of course, their RX 7900 XTX is just $100 more at $999 which leaves a very small window for overclocked aftermarket cards to fit into. XFX said that we should expect to see the MERC 310 7900 XT Black Edition in the $949 to $979 range but a quick look this morning shows it on the high end at Newegg right now. With AMD's tight pricing it puts aftermarket cards into an impossible situation where once you figure in the larger cooler design are you going to want to get an overclocked 7900 XT for $979 or a stock-clocked and faster 7900 XTX for $30 more. If given that option I would go with the XTX every day of the week. Of course, I don’t think that those cheaper XTX or XT options are going to be available much so most won’t have to worry about being put in that spot. Overall XFX is offering some value with its improved cooling, clean styling, and overclocked performance but keep an eye out for an XTX as well when you are shopping as you might end up with a cheap upgrade. 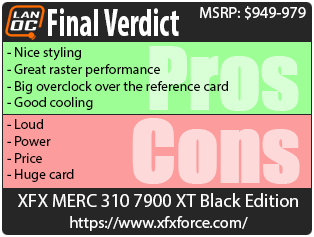 You might call him obsessed or just a hardcore geek. Wes's obsession with gaming hardware and gadgets isn't anything new, he could be found taking things apart even as a child. When not poking around in PC's he can be found playing League of Legends, Awesomenauts, or Civilization 5 or watching a wide variety of TV shows and Movies. A car guy at heart, the same things that draw him into tweaking cars apply when building good looking fast computers. If you are interested in writing for Wes here at LanOC you can reach out to him directly using our contact form.
Discuss this article
Log in to comment
Posts in discussion: XFX MERC 310 7900 XT Black Edition

We have 1599 guests and no members online