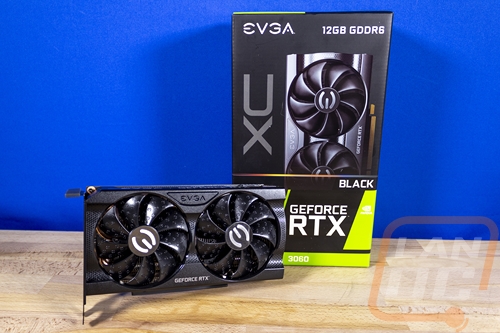 The video card market has been a little like groundhog day for four or five months now with card demand being through the roof and availability being limited. Big jumps in cryptocurrencies have brought mining back in vogue as well which has exacerbated things as well. Well, today is the big day for the new Nvidia RTX 3060 which was announced back in January. Nvidia has already put miners on notice that they are taking firmware and software action to limit mining performance, at least with Etherium with the hope that their new cards can get into gamer's hands. This is extremely important because the RTX 3060 follows up the RTX 2060 and the GTX 1060 which were huge sellers. Today I’m going to check out the EVGA RTX 3060 XC Black and see how the new GPU performs in EVGAs more compact dual-fan SFF friendly design.

Before getting into the RTX 3060 I wanted to touch a little more on why the xx60 cards are so important. Just looking at the Steam hardware survey the GTX 1060 still tops the charts with 9.75%  of steam users still running the 1060 which came out 5 years ago this July. The GTX 1050 Ti is right behind the 1060 with 7.07% of the market and the slightly newer GTX 1650 is sitting at 4.95% as well. Not to mention the RTX 2060 rounding out the top 5 at 3.72%. Those four cards alone are 25.49% of the entire market share. That is a lot of people who wanted great performance at a good value and a lot of those have been on the market for a new card for a while. The GTX 1060 has dropped 1.61% over the past five months and that is even before the new 3000 series of cards has its new non-Ti xx60 model. Will Nvidia’s actions with the driver, firmware, and silicon to limit hash rates help and show gamers some relief? Well, it is only Ethereum specific and from what I understand doesn’t stop other coins so we will have to wait and see. But Nvidia’s reaction does show just how important the RTX 3060 is.

The other big part of the original RTX 3060 announcement was the MSRP of the card which was put at $329. Given the push back on the RTX 2060 being at $349 when it launched due to its larger die size, it is great to see the MSRP come back down. Of course, MSRPs are completely out the window right now with just how limited stock for GPUs has been with retailers already showing significantly higher prices for their RTX 3060’s. So until all of that chances, MSRP’s don’t apply at all sadly.

Now before diving into any GPU review I do always double-check the specifications of the card against what is showing up in GPUz. The EVGA RTX 3060 XC Black card that EVGA and Nvidia partnered up to send over for the launch is designed to have the base specs of the RTX 3060 as listed above. So we can see that we do have the 1777 MHz GPU boost clock speed and the 1875 MHz memory clock does add up to 7500 MHz (I’m not sure where Nvidia gets that extra 1 on their specifications, but it is close enough). GPUz also documents the BIOS version I tested on, that we had Samsung memory, and the driver version I tested with which is the pre-launch driver provided by Nvidia. 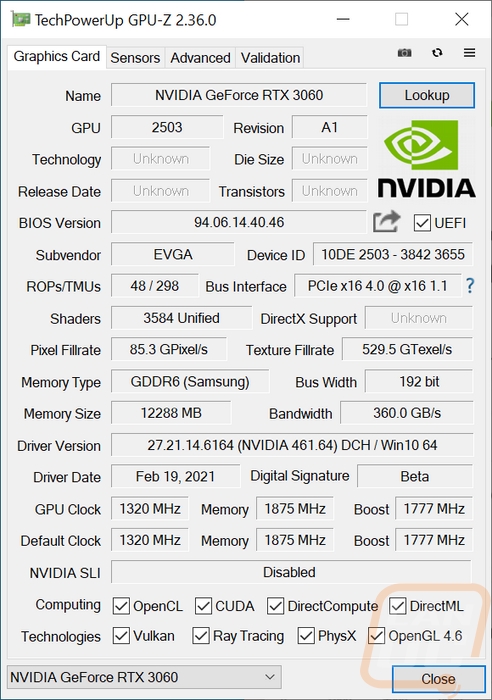 We have 1832 guests and one member online