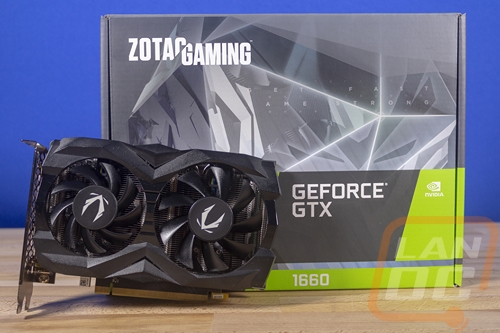 Nvidia introduced the GTX 1660 Ti late in February and this answered a lot of questions about how the rest of the product stack would fill in under all of their recently launched Turing based RTX cards. The GTX 1660 Ti showed that they were bringing Turing to the mainstream cards by dropping ray tracing and it quickly jumped past the GTX 1070 and put AMD into a pricing bind with the Vega 56 as well as the RX590. Well, the GTX 1660 Ti name did bring up a lot of questions as to why they didn’t stick with the 2000 series or even move up to the 1100 series from the previous GTX cards. But the Ti in the name did let us know that there would most likely be a model that slotted in below it and today that card, the GTX 1660 launches. There aren’t Founders Edition models so we had to reach out to get a card and Zotac was kind enough to send their GTX 1660 so I am going to take a look at that today and see how Nvidia’s new card compares to the GTX 1060, GTX 1660 Ti, and of course the RX580 and RX590 from AMD.

Before we get into the normal card review. I did want to take a look at what the GTX 1660 is. The dropped the Ti but what else changed? Well, a quick look at our specifications below fills in a lot of blanks. For starters, the GTX 1660 is based on the same TU116 GPU as the GTX 1660 Ti. So you are still getting the hybrid Turing architecture without the RT cores. You still get the shader innovations that play a big part in Turing's performance as well as the unified cache and adaptive shading. I talk a lot more about those in the GTX 1660 Ti launch article and in the RTX 2080 Ti launch article. I’m not going to go into depth again today, but just know that the GTX 1660 does have the same GPU base as the GTX 1660 Ti. What they did change, however, is the number of SMs. They dropped from 24 down to 22 which isn’t a big jump but by turning off two SMs they drop the number of CUDA cores down from 1536 to 1408. They did turn the clock speeds up slightly, the base clock is now 1530 MHz and the boost clock is 1785 MHz which is up from 1770 MHz. 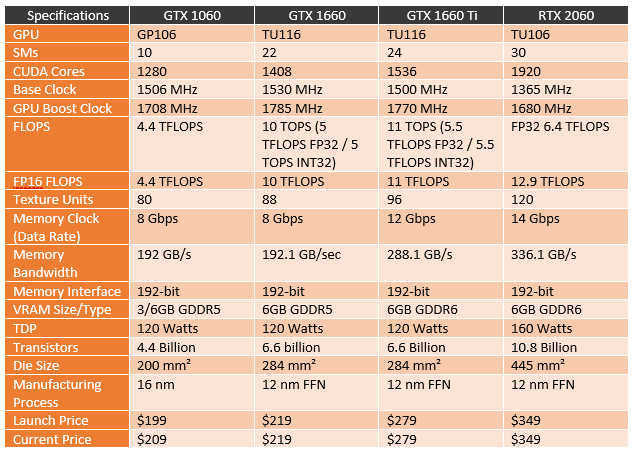 The transistor count didn’t change from the GTX 1660 Ti to the GTX 1660, they are using the same GPU as I mentioned. The die size is the same as well. This is still 2.2 billion more transistors than the GTX 1060 and the die size reflects that as well. Even with it being built on a 12 nm FFN process compared to the 12 nm process on the older GTX 1060. The TDP stays the same as well, sitting at 120 watts which both the GTX 1060 and the GTX 1660 Ti also run at. As for pricing, this new card is launching at $219 which is $60 less than the GTX 1660 Ti. I was most curious how this compared to the GTX 1060, that was a sticking point for me with the Ti launch because it was so much higher than the GTX 1060 was at launch. $219 is still higher than the $199 launch price, but closer to a cost of living increase as would be expected. Now we don’t know how this new card performs, but that $219 price point is a lot more exciting than the GTX 1660 Ti, so it will be interesting to see how it performs later. 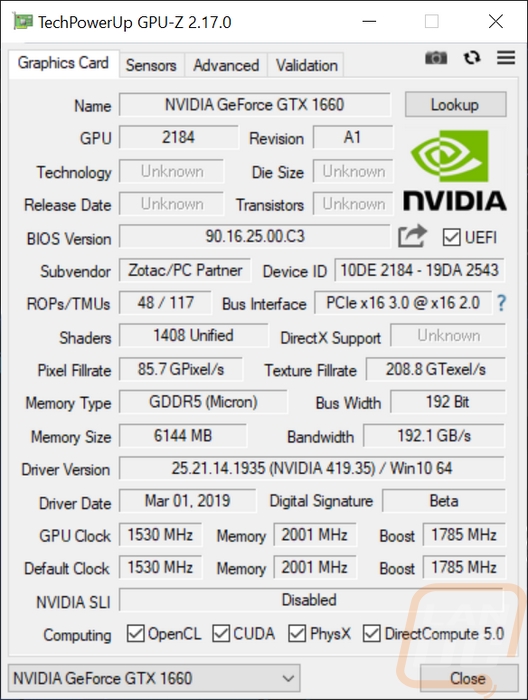 Before I get into testing, I do want to include a copy of our GPUz from the Zotac card we will be testing. This was everyone can see what BIOS version I tested on and the driver I used (which was the 419.35 driver Nvidia provided pre-launch). The clock speeds of this card match the 1530 MHz base clock and 1785 MHz boost clock that the GTX 1660 has listed as stock so this isn’t an overclocked card, giving us a great look at stock performance.