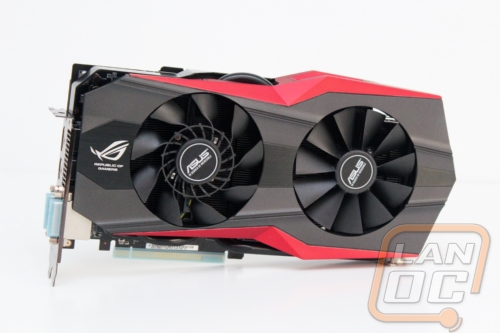 Even this late into its life the R9 290X is still a powerful card, performing better than everything but the GTX 980. The new drivers from AMD have helped refresh the performance a little and most importantly helped fix a few bugs. There still seem to be a few issues on that front though, our Grid Autosport results were a great example of that. The Matrix specifically seems to be the best possible option for someone looking to break a few more 290X records as well. The card has built in LN2 features like the LN2 mode switch, memory defrost switch, and the VBIOS reset button.

Just going by the hardware, it is clear that this card is capable of a LOT more when overclocking. Sadly, it is limited by the amount of heat it generates. The same really can be said for the cooling as well. This is by far the largest heatsink I have seen on a card but when doing temperature testing it was on par with the performance of some reference coolers. Part of that is because Asus is running a conservative fan profile to keep the noise down. However, it also doesn’t help that the 290X is just a hot card. The temperatures wouldn’t bother me to much but the 290X is known for throttling down when it gets hot and the last thing we want to see is the performance drop for you in a long gaming session. Be sure you are running this in a well-ventilated case and to get the most out of it you should be looking at water cooling or at minimum change the fan profile to be a little more aggressive.

The large cooler was a little noisier than expected as well but for me the biggest issue was with its overall size. The card is without a doubt the biggest card I’ve ever worked with. Specifically it is very tall causing fitment issues in some cases. You should also plan on running a big power supply with the 290X’s power draw as well. That said the large cooler is a good-looking card. Sadly this card is hard to come by now but like I said if you are an overclocker and you come across some you should snatch them up. 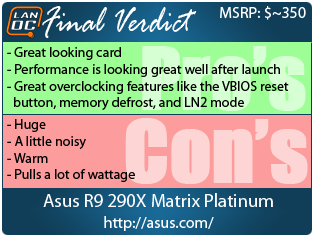 You might call him obsessed or just a hardcore geek. Wes's obsession with gaming hardware and gadgets isn't anything new, he could be found taking things apart even as a child. When not poking around in PC's he can be found playing League of Legends, Awesomenauts, or Civilization 5 or watching a wide variety of TV shows and Movies. A car guy at heart, the same things that draw him into tweaking cars apply when building good looking fast computers. If you are interested in writing for Wes here at LanOC you can reach out to him directly using our contact form.
Discuss this article
Log in to comment
Posts in discussion: Asus R9 290X Matrix Platinum