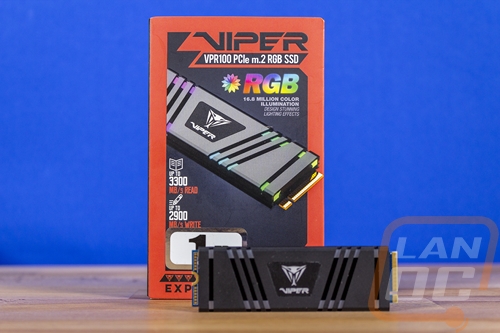 With the inconsistent performance drops that that RGB lighting was giving me, I did do all of our performance testing with the lighting turned off. I didn’t originally plan on doing this and I don’t really like that I had too. But because of the inconsistent results, I could go through all of our tests and the results may not reflect what you might see or it might show the slowdown on every result when you may only see that sometimes. So be sure to check out the previous section about lighting where I do show the number differences, but just know that if you run the VPN100 with the lighting on you may sometimes get 20 or 30 percent slowdowns slower than the numbers below. As always I also include a CrystalDiskInfo screenshot. This documents the firmware of the drive and shows if our drive has any issues from the start and if it is connected with the right PCI generation and the number of lanes which the VPR100 is. 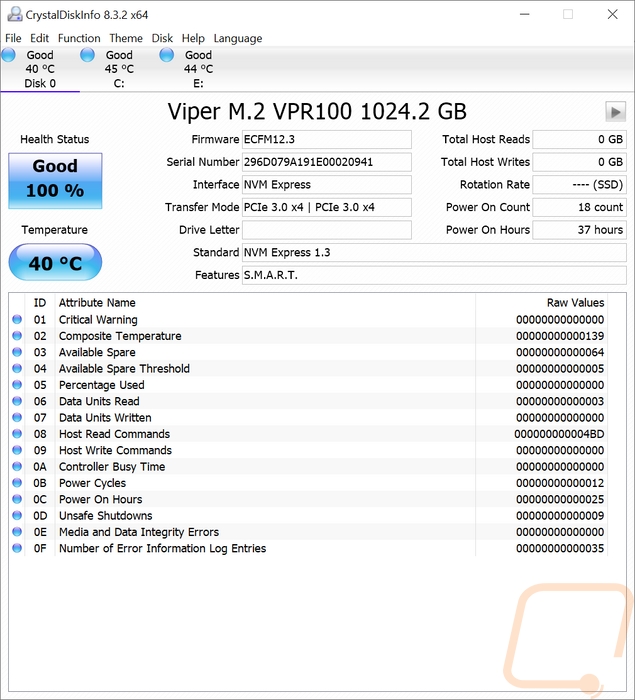 So to start the testing off I always like to look at CrystalDiskMark which lets us see sequential performance. CDM has updated recently and our original test suite uses the older CDM 6 results and to keep the consistency with past test results I still run that test. But I also included the new CDM 7 results below that as well because I will eventually be moving to that. Anyhow, with the exception of the Corsair MP600 which is a PCIe Gen 4 drive, the VPR100 is actually right at the top of the charts, sitting just above the always fast WD Black drives. The same goes for the write test as well, edging out in front of the SN750 by two MB/s which makes this an impressively fast drive. The CDM 7 results are similar as well, really the main changes in CDM7 are in the other test, not the sequential test at the top. 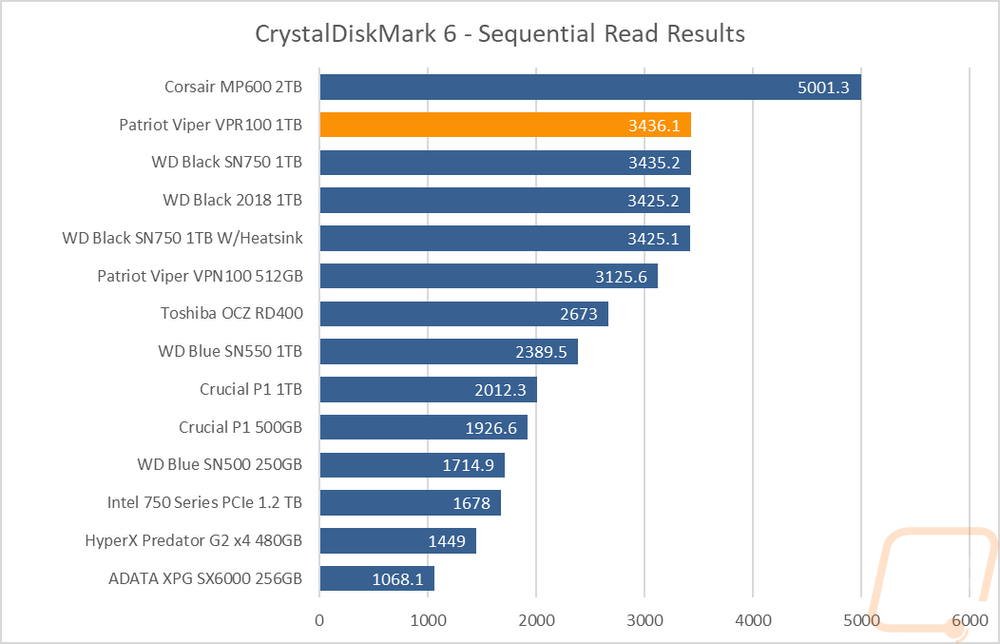 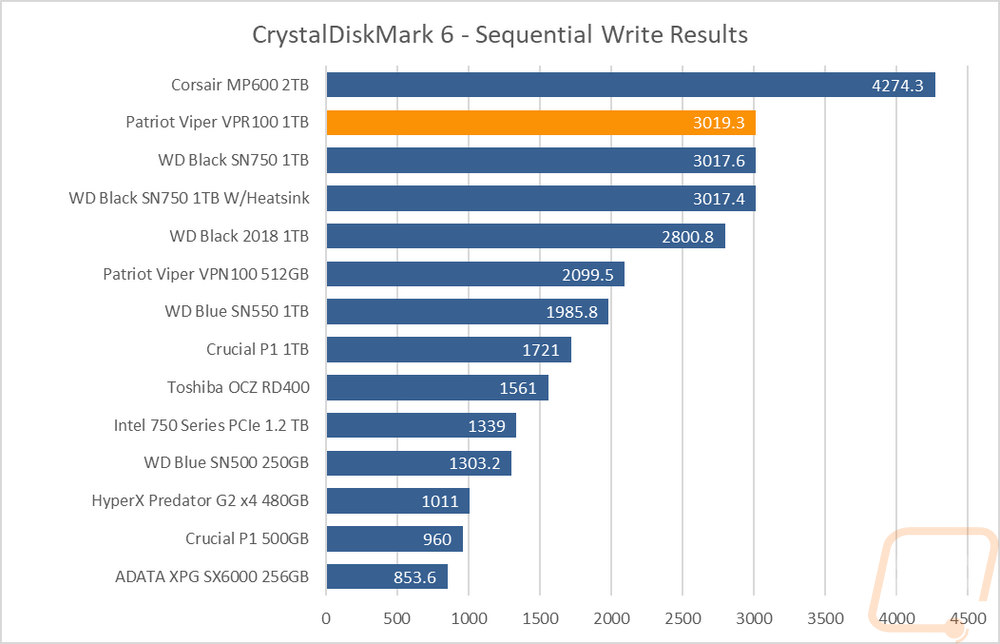 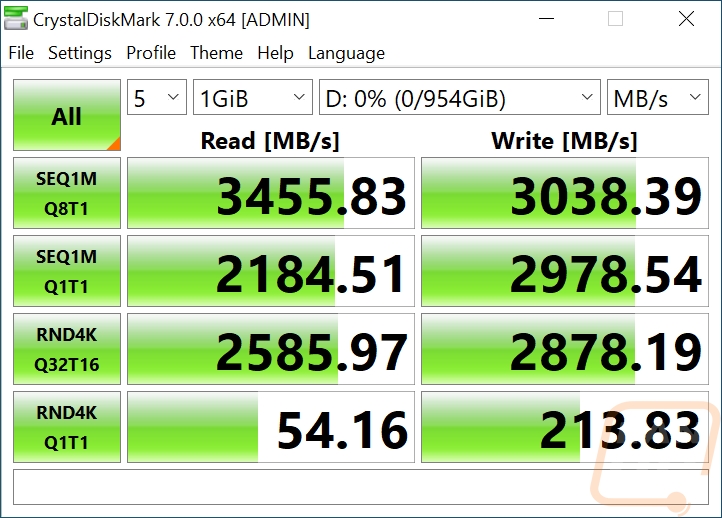 Speaking of other CrystalDiskMark tests. I do also take a look at the IOPS performance, looking at the 8 queue depth and 8 thread performance in both reads and writes. I combine them in the chart below to get an overall look at the drive, but you can see the individual numbers as well. The VPR100 is a little behind the SN750 on the read IOPS, but it is faster on the write IOPS with the only other drive up in that same range being the VPN100 which is also from Viper. 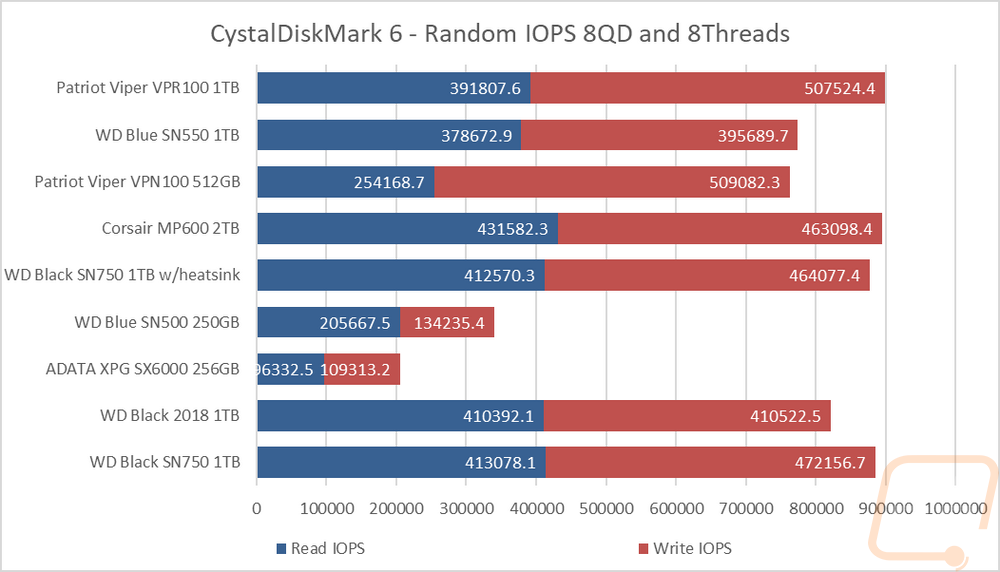 Next, I run a timed file copy benchmark using AS SSD which tests three different file types that are often used. Overall here the SN750 did better but the VPR100 was still fast, especially in the program file type with the SN750 pulling ahead because of its speed with ISOs. 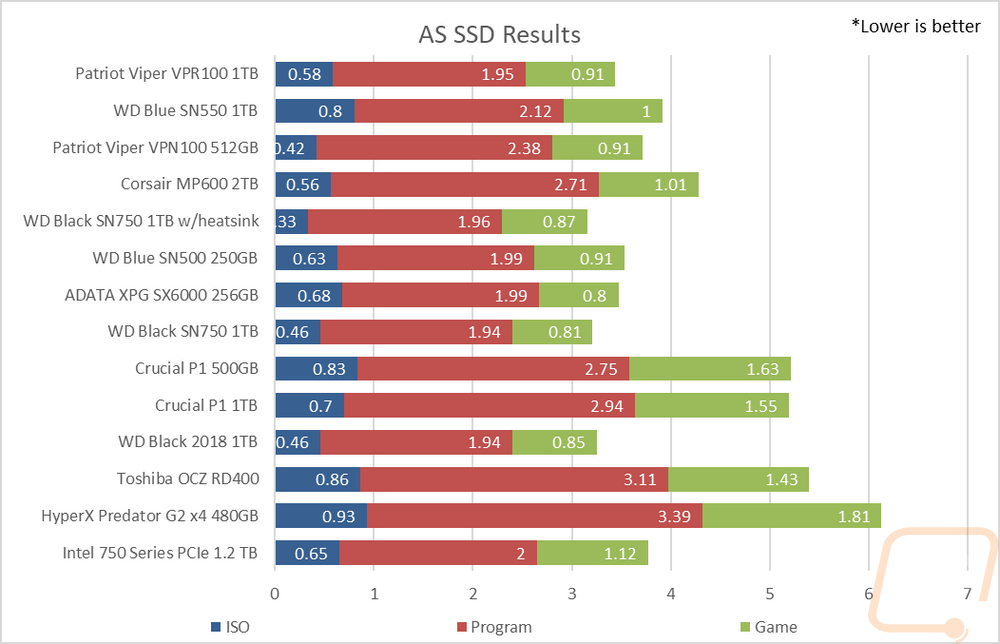 In Passmark Performance Test 9 I did a few different tests. I ran the complete storage benchmark using the main software which runs a list of different tests altogether and outputs a score. For that one, the VPR100 came out with a nice lead ahead of the SN750 with just the PCIe Gen 4 based MP600 out ahead of it. Then I used the advanced disk benchmark tool to run a few other tests. I did the four default tests which look at four enterprise uses scenarios. In the workstation test which is the most like a normal PC usage, the VPR100 did well but the MP600 was still fast, as was the much older RD400 as well. Web Server and File server tests were surprisingly faster than the MP600 but the SN750 was still faster. Then with the database result, the VPR100 did well once again but the SN750 was much faster, with the now-dated Intel 750 series also being faster on that test. 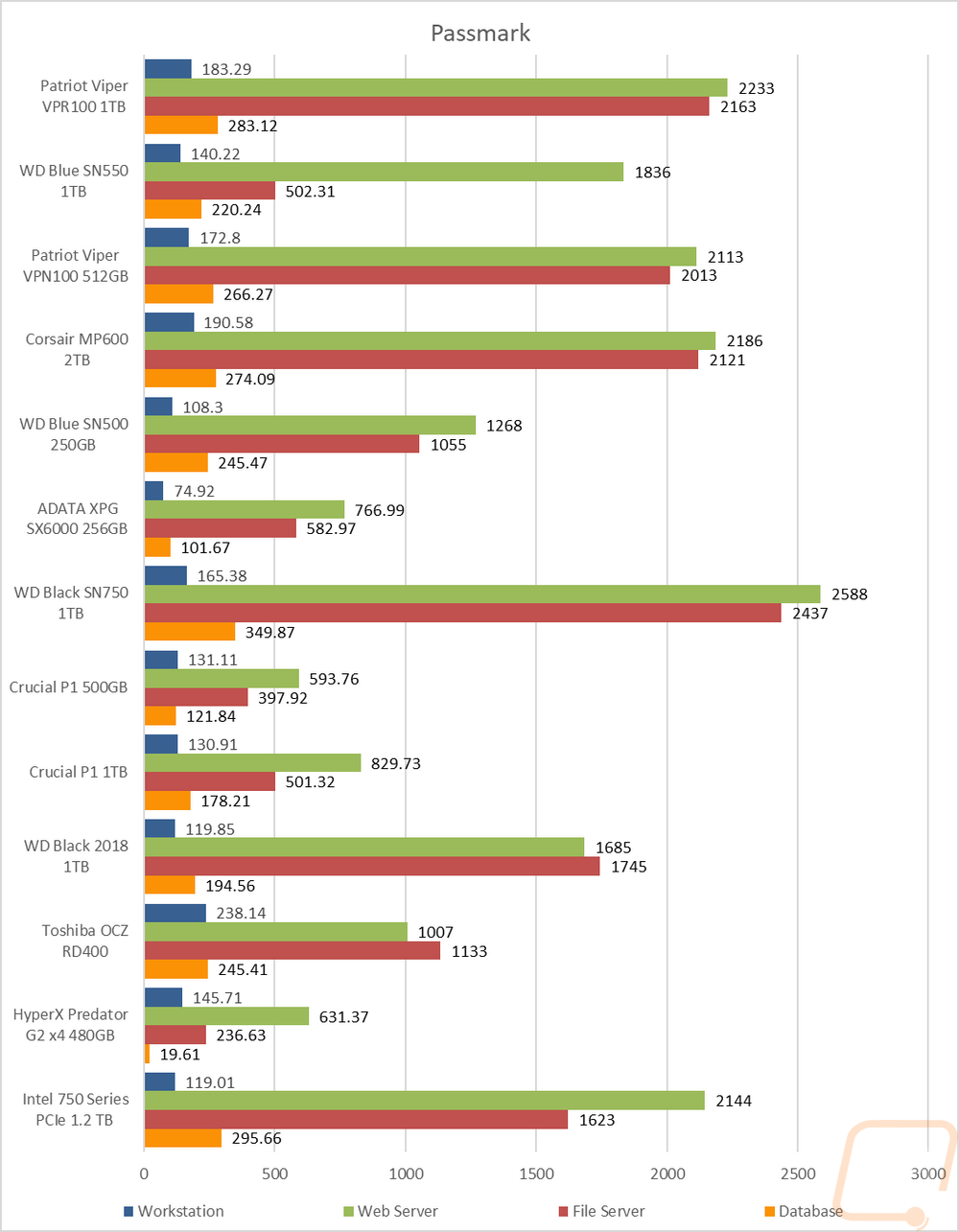 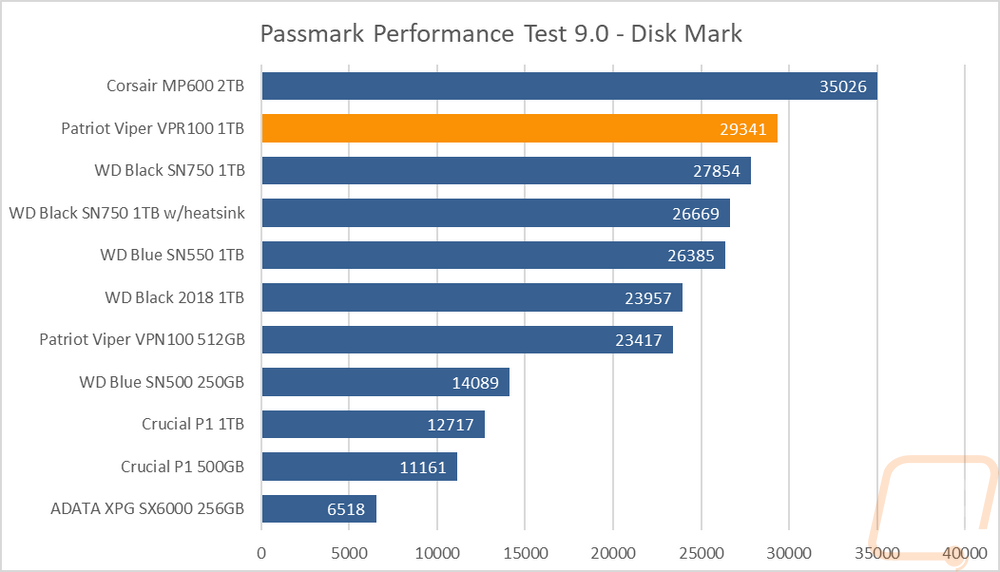 For another look at IOPS results, I went with Anvil’s Storage Utilities where I ran random IOPS tests at a 16 queue depth on both the read and writes on the VPR100. I combined the results as I do like to see the overall performance of a drive and the MP600 with its PCIe Gen 4 transfer speeds was still out ahead, as was the always fast WD Black SN750 but the VPR100 did a lot better than I expected, especially with its random write IOPS. 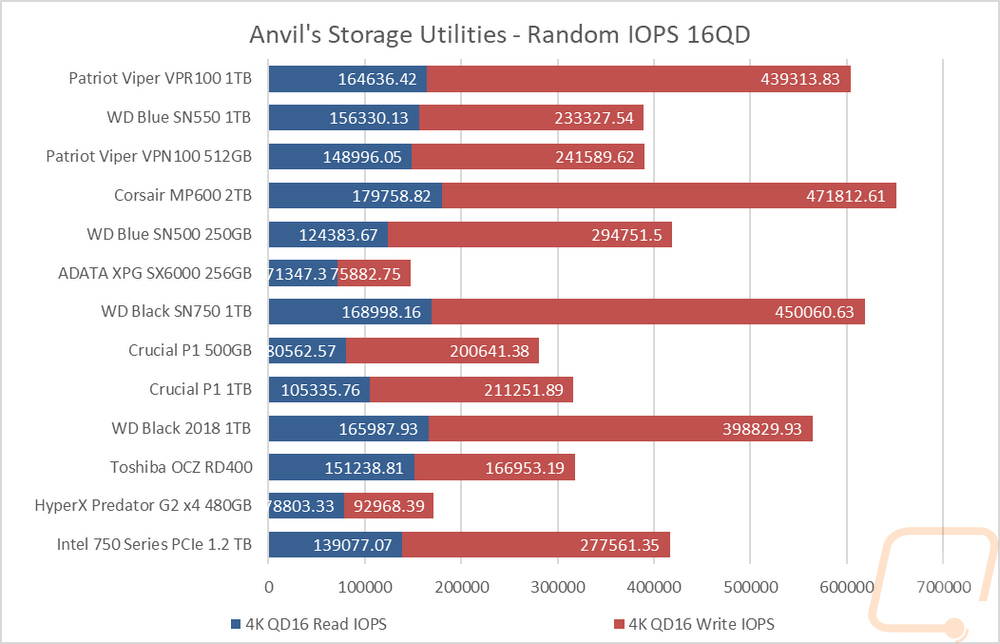 Sticking with Anvil’s Storage Utilities from the last tests I also did a series of tests to get an idea of how the drive reacts to different queue depth loads. I did this with both reads and writes. With the read queue depths, I was impressed to see that the VPR100 didn’t drop off at the high end like most drives do. You can see that there are only 5 drives out of all of the drives tested that continue to improve in speed each time the queue depth is doubled and they are all high-end drives. The VPR100 actually came out to be the second-fastest drive at a queue depth of 128. It did well even down low as well with mostly just the MP600 being faster. In the same test but with write performance the VPR100 did drop off on the last test, but it still ended up coming out as the fastest of all of the drives tests at that level. The MP600 was faster with a queue depth of 32, but it dropped off even more at a queue depth of 64 than the VPR100 did. 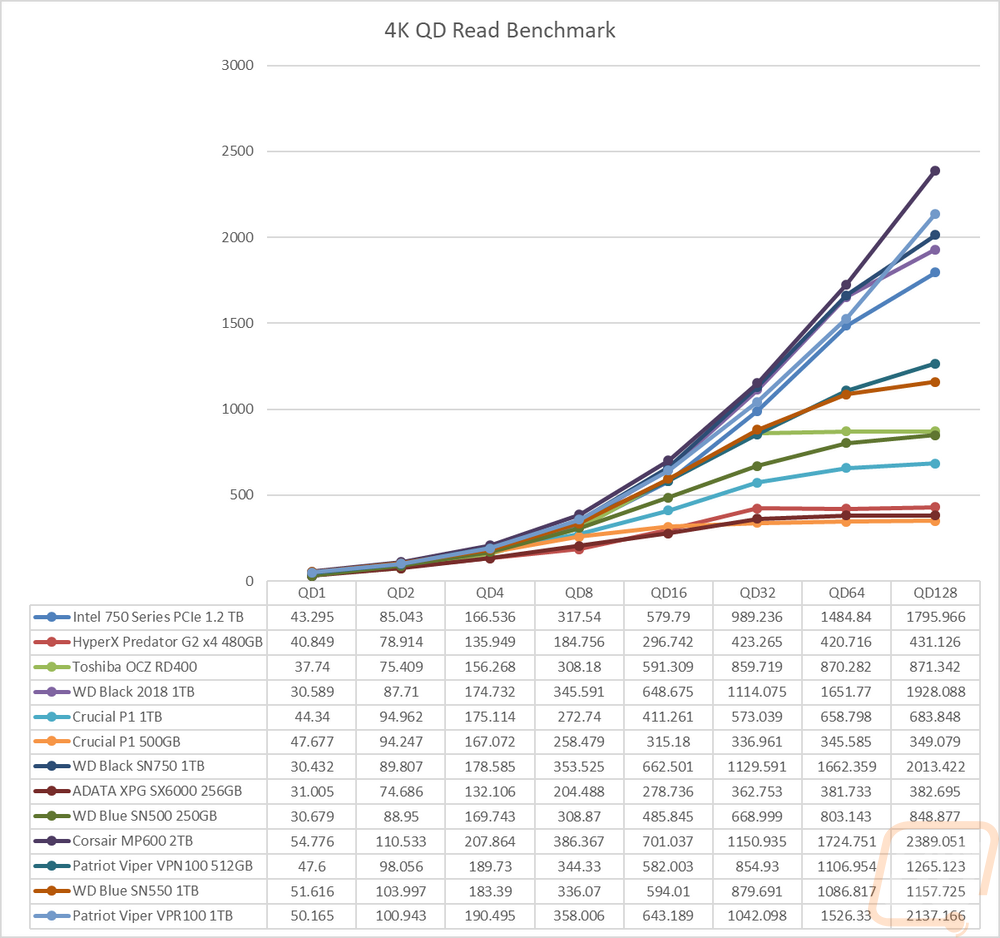 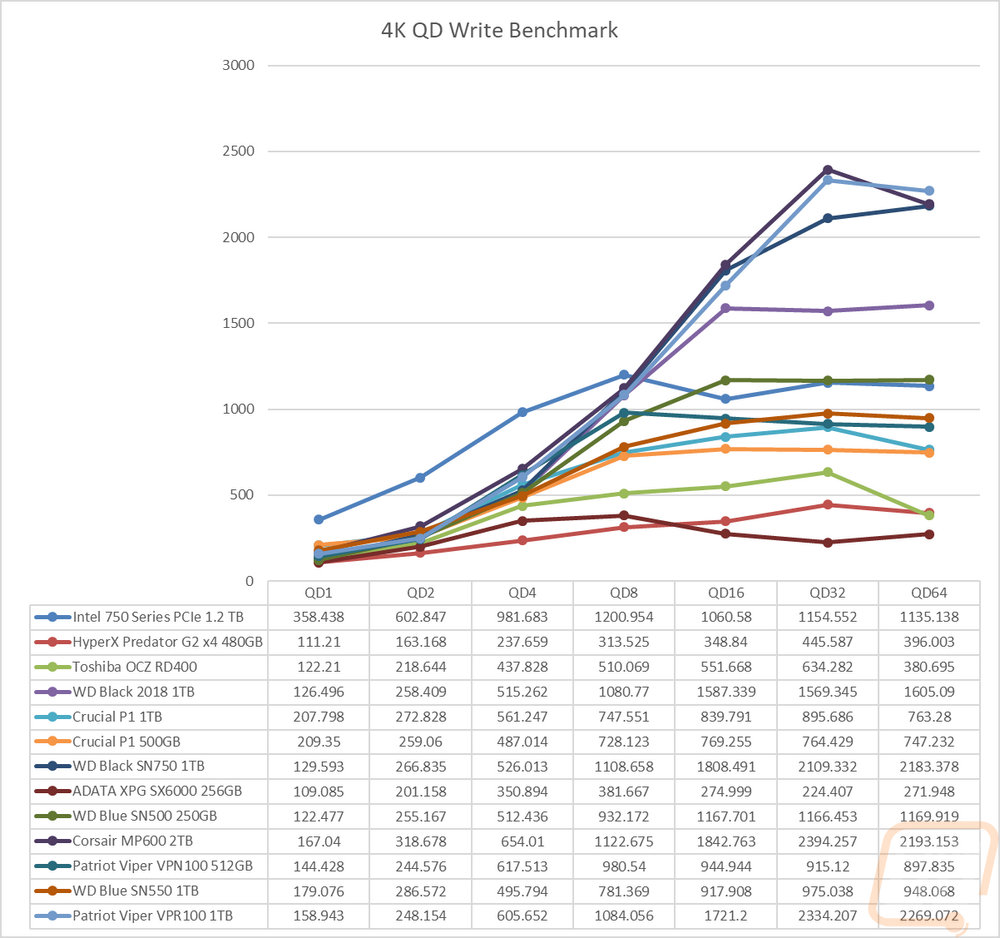 We have 870 guests and one member online