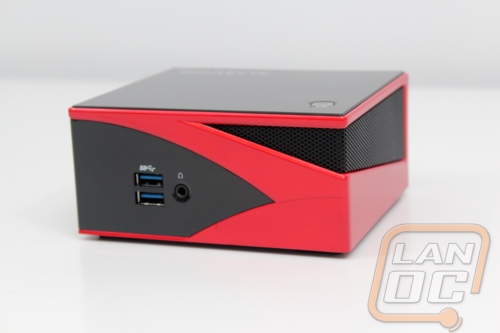 So to get an idea of how the Brix will perform I ran it through our SFF PC test suite. None of the tests are especially demanding but they do help see how well the PC will perform day to day, in games, cooling performance, power usage, and also how well the storage works. To start things off I ran a general benchmark, PCMark 8. Here we get an overview of gaming, CPU, and storage performance all in one result. The AMD A8-5557 powered Brix powered though PCMark 8 and actually gave us results close to what I saw with our older modeled i3 NUC. This is actually a great sign because the NUC has been a great performer. The AMD Brix did perform noticeably better when using the OpenCL Accelerated test but this is to be expected as AMD’s normally do excel in OpenCL.

The next test was wPrime, a CPU specific test that we also use in our CPU benchmark suite as well. Here the lower the number the better the performance. While the numbers don’t look as good when compared to the Nightblade and our Lunchbox 3, both of those PCs are much larger and running the fastest i7 desktop CPUs you can buy. CPUs that cost about what our entire Brix costs. So the best comparison is with the Intel NUC with the i3 and the Asus ROG GR8 with the i7. The Brix out performed our NUC and while there is still a big gap between it and the GR8 I still think it performed well.

Next I tested using Passmarks complete test. This is similar to PCMark 8 in the way that it tests all of the subsystems, CPU, GPU, and storage performance. The main difference though is PCMark 8 uses real world tests and Passmark uses synthetic tests for each. Suprisingly here the Brix was just slightly lower than the GR8 and the NUC was the fastest of the three. That said the difference between all three was minimal.

Next I tested using Unigine’s Heaven Benchmark 4.0. This is a synthetic gaming benchmark that runs you through 26 different in game situations. It is based on an engine that a lot of games use so it is barely synthetic but I consider it synthetic because it isn’t a real game. That said the Brix fell completely on its face in this test with an average FPS of 2.9. We do the test using the extreme setting but even then I expected a little better performance. Sadly I don’t have a NUC result to compare it too but I expect it to be close as well as the GR8 with its GTX 750 Ti didn’t even manage a true playable result.

Next I ran through the latest 3DMark in both the performance and extreme settings. This basically tests at 1080p and then at 1440p as well. When I ran this on the NUC it actually would fail in the extreme test so I was very happy to see the Brix make it through. That said in the performance test the Brix still came in just below the NUC with a score of 504 to the NUCs 605.

Next using CrystalDiscMark I tested the storage performance. Typically this test is used to see just how well the storage included with a PC will perform like how the GR8 fell on its face but this does give us a chance to check out the performance of that Kingston mSATA that they were nice enough to send over. For read speed the mSATA drive performed very well with a read speed of 415.8. The write speeds were a little low but still looked good against the competition tested with a write speed of 222MB/s.

It might seem trivial in a standard PC but when you get into form factors as small as the Brix heat can really become an issue. Hell I have fought with it in my Mini-ITX builds before even. So for the Brix heat testing I do the most extreme situation, running prime95 to see how well it keeps the CPU cool. In this case things did get a lot warmer than what I saw with our i3 NUC. 83 degrees isn’t great but I was happy that even in an extreme situation that you shouldn’t see in everyday use the PC didn’t overheat.

In these small form factor builds power usage is also important. A lot of people who pick up a small build like this might be using it in a situation where it runs all of the time like an office, HTPC, or even for advertising. Over time power usage does mean more money. So to test this I use a Kill-A-Watt and test the idle power draw as well as the peak wattage when running Heaven Benchmark. At idle the 14 watts pulled isn’t bad, putting it below the GR8 but still a little more than it should be above the NUC but Intel CPUs have made huge improvements in idle power draw over the past few years. Under load I saw 41 watts at peak. This is almost spot on with the 38 watts that a 24 inch monitor pulls to put it into perspective!

So overall how did the Brix perform? Well I’ll be honest I was expecting a little more in gaming performance with this including its own GPU. But with that said it basically stayed on par with our older i3 NUC across the board. This means you can expect a good user experience and enough GPU power to do and play a few things at lower settings, basically what your everyday PC can handle. But the difference is this is a tiny PC that can mount to the back of your monitor if you want. The newer NUCs will obviously out perform this but if you are an AMD fan this is still a great option.

Thanks for the review, it convinced me to try it out

We have 829 guests and no members online