Desktop computers have an inherent flaw in that, short of custom modding jobs, most PCs end up looking fairly similar.  Most cases are black and nondescript, with only a portion of people opting for case windows to show off their hardware. And if you have a store bought rig, forget creativity - there are thousands of people with the same exact computer.  So the question is, what makes a specific build unique?  What it boils down too are all the little features and touches that the end consumer may opt for over one another.  Accessories play a large part of this picture. One person might decide they need a fan controller, whereas another might have a use for an all in one memory card reader.  In the end these people are able to claim difference from one another in form and function.  VFDs are one of the more interesting computer accessories, providing visual information via a small screen.  This is not unlike having a small monitor attached to your computer at all times. Its worthy to note that the term VFD actually is an acronym for the technology used in older devices, and has become a catch-all term for them in general.  Most newer VFDs actually utilize LCD technology for a crisper viewing experience. Many case manufacturers include mediocre old VFDs with their htpc cases but quality new ones usually have to be purchased separately.  SilverStone makes such a VFD, the MFP51 LCD Media Display, which they kindly sent to us to try out...

Review Pics by: Wes and Tomikaze 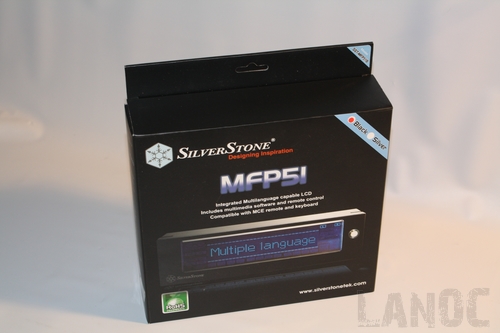 A pegged cardboard box is this device's shelf coffin, a little out of the ordinary anymore- but functional  The front shows a picture and name of the product with a brief function description.  There is also a color option in the top right which is where SilverStone marks whether the enclosed VFD is black or silver.  The small sides of the box include the same description that is on the front, but in six languages other than English.  On the back we find your typical specs list, which strangely, is in a different order than the website.  Not that this is remarkable in any way, it's simply typical for web specs and packaging specs to be identical.  Also on the back is an extremely useful picture that serves as a quick guide to all of thepanel's various indicators and symbols. 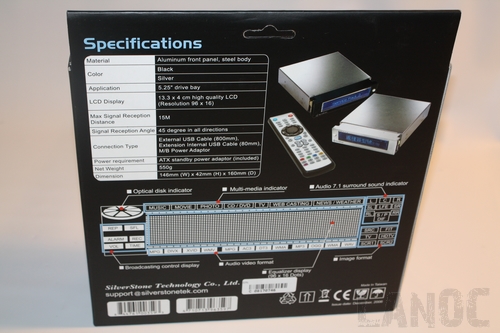 Opening the box reveals a cardboard spacer that fits the product and the included accessories in the box snugly; good for preventing damage to the fragile electronics inside due to mishandling.  In addition to all the aforementioned items in the specs you are also given an iMON software disk labeled with SilverStone's logo, as well as a user's manual that serves as a guide for installation and operation of the device. 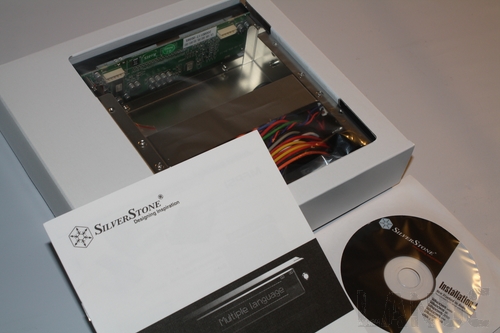 Before you even put this thing in a bay, indeed the first thing you will notice even upon touching the MFP51 is its quality.  You see, the only portion of the panel that is technically needed is roughly  the front two inches of the device. All the rest is merely filler to ensure that it will fit properly and snugly in a 5.25" bay.  SilverStone could have taken the easy way out and made it just long enough to secure in the bay, but they took no cheap or easy road.  Even the finish around the display is brushed metal. This is not merely a stylish choice, but a functional one as most of SilverStone's cases if not all are finished thus.  The actual installation of this device is a bit tedious unfortunately, with the wiring being a little above someone who doesn't tinker with their rig's innards regularly.  The 24 pin ATX power cable must be removed from the motherboard and the 24 pin extender that attaches to the VFD put in its place.  Then the 24-pin cable you just removed must then be attached to the extender.  The purpose this serves is two-fold.  It not only provides power to the device, but also allows the device to control when your computer powers on. 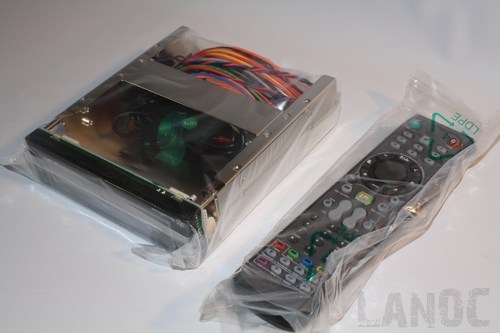 In order for you to take advantage of this, however, you also need to plug the included two-pin power switch cable from the back of the panel into the motherboard.  In order for your normal power switch to work in addition then, you have to plug its two pin connector into the back of the VFD.  Mess anything up, and its likely that your rig won't start until you get it right.  The second, and decidedly easier step, is to connect the device to one of your usb ports.  Now by default, the connector is supposed to attach directly to a set of USB pins on your motherboard.  However, if you don't have an open set of pins you can use, SilverStone provides an adapter for a regular external USB port.  The easiest way to utilize this is to route the cable out of an expansion slot at the back and into a rear USB port.  When you boot your computer, now either normally or with the remote, Windows will recognize your new hardware.  Then it's as simple as inserting the software into a cd/dvd drive and installing it. 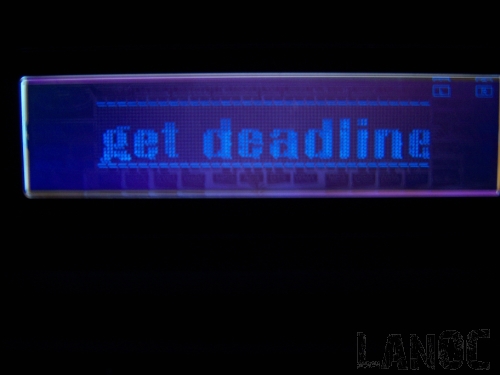 Technically, the MFP51 doesn't do anything, it merely displays information.  Although it is not without merit to be able to see hardware, temps, fan speeds and the like on the fly.  The true powerhouse to this product is the remote and the software.  Before I cover that, though, there are a few points I want to relate about the panel itself.  The LCD technology used in this screen is top notch.  The MFP51 has superb viewing angles when compared to other VFDs and you will be able to read it legibly at almost any reasonable angle.  The IR receiver found on the front right of the device is about as good as IR gets, which still is pretty bad.  The 45 degree angle claimed in the specs seems to be right on the money one way or the other, which means that if you aren't reasonably in front of the device, the remote will do you no good.  On the display in question, their are readouts for every possible media related thing you could possibly want.  It tells you whether or no you are currently reading a CD or DVD, what kind of file type you are watching or listening to, what mode you are currently in, all the way to what speakers are you utilizing and in what configuration, all the way up to 7.1 surround sound.  And this is just all the little icons surrounding the actual scrolling readout itself, which tells you things based on what you are doing or you want it to tell you.  The chief way to do this is by using the iMedian software.  What the iMedian program boils down to is a Swiss army knife of a movie player.  It allow you to search your folders for all of your movies, TV shows, and music, so that you have a comprehensive list of files to play.  Like I found when I reviewed the Antec Veris, the iMedian player has a very robust file-type compatibility.  Besides all of this normal fair, the iMedian software also provides access to weather forecasts in an area of your choosing as well as a list of reputable news sources you can check whenever you want.  The best thing about this is that the MFP51 will display snippets from the weather and news you picked even when you aren't using the iMedian software.  So you can get occasional headlines and forecasts scrolling by even when do something completely different on your PC.  The iMon software, on the other hand, allows you direct access to the display and remote functions.  You can alternate between 8 different modes on the panel:  Auto, Graphic EQ, System information, Media Information, Email, Daily News, City Information, and Plug- In.  Auto cycles between the others at set intervals.  The graphic equalizer is a pretty nifty display that changes based on what you're playing.  System info displays your hardware specs. 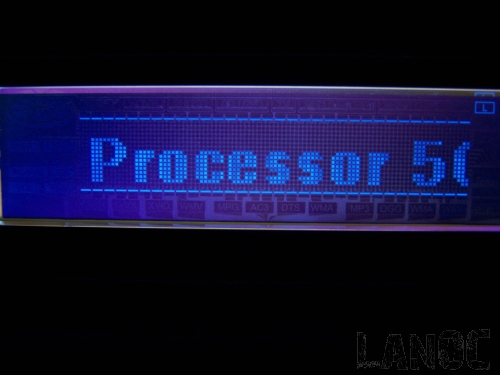 Media shows the title and other info pertaining to a file you're currently playing.  Email and Daily News should be pretty self-explanatory, while City info displays things like local weather. 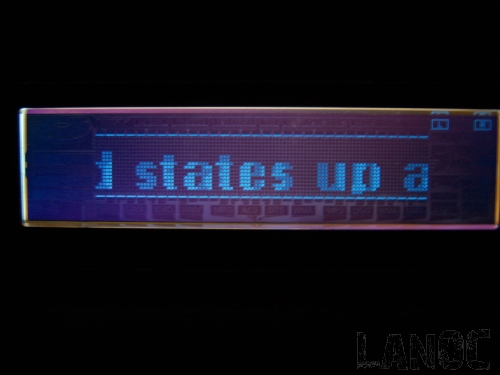 Plug-in is unique in that it allows you to display things from third-party applications. All of this is available at the touch of a button, making both the iMon and iMedia software very powerful indeed. 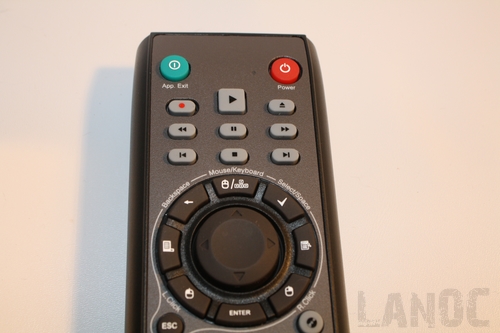 The remote finishes off this trifecta of awesome with the ability to do all of the aforementioned things, but without a mouse or keyboard.  Yep that's right, you can use the pad on the remote as a mouse, and press just one button for a keyboard to pop up.  This enables you to remotely interact with your PC without having a mouse and keyboard on hand, a true home theater experience.  The volume buttons directly alter your system volume, especially handy for watching movies that get too loud with little notice.  The channel buttons are invaluable if you have a TV card in your computer, allowing you to change channels much more expediently.  The remote can turn your entire computer on and off if you want to.   Some of the more useful features the remote gives you access to are a task launcher, and an app switcher.  The task launcher is interesting because it lets you open applications from a list you've predetermined - enabling quick application access without all of the navigating.  The app switcher functions much like the task manager, allowing you to switch between and close things on the fly.  In addition to all these specialized features, the remote comes with all your standard playback buttons for your convenience: Play, Pause, Fast Forward, Rewind, Stop and Record.  Really my only gripe with the remote is that it takes triple-a batteries, which no one ever has extras of.  This is a fairly accurate summation of the device's capabilities, but mind you, this is only a majority of the function available to the purchaser of this product.  There is much more to be had here should the user take advantage of the ability to remap any and all buttons, as well as the utilization of the weather and news iTools.  With enough dedication, the possibilities here are endless. Conclusion Never before has such a wealth of options come in such a small package.  Sure the idea behind a VFD makes it somewhat impractical.  I mean, are you really going to read little info about your system or the news while you are watching the screen intently, like in the middle of a game or movie?  These abilities are a mere novelty at best.  But what truly makes this product shine is the whole media package.  If you are running this device in a home theater system or watch a lot of TV and movies on your main rig, the remote and software will streamline the process so well that you'll wonder how you lived without it.  And meanwhile, it's hard to argue that the display won't at least be a stylish addition to your case. 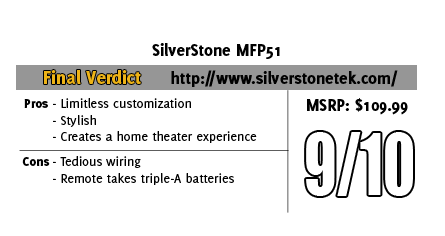 You might call him obsessed or just a hardcore geek. Wes's obsession with gaming hardware and gadgets isn't anything new, he could be found taking things apart even as a child. When not poking around in PC's he can be found playing League of Legends, Awesomenauts, or Civilization 5 or watching a wide variety of TV shows and Movies. A car guy at heart, the same things that draw him into tweaking cars apply when building good looking fast computers. If you are interested in writing for Wes here at LanOC you can reach out to him directly using our contact form.
Discuss this article
Log in to comment
Posts in discussion: SilverStone MFP51 Multi-Media LCD Display