SilverStone RGB fan grills, Christmas decorations? - Hooking everything up and a few small tricks learned along the way 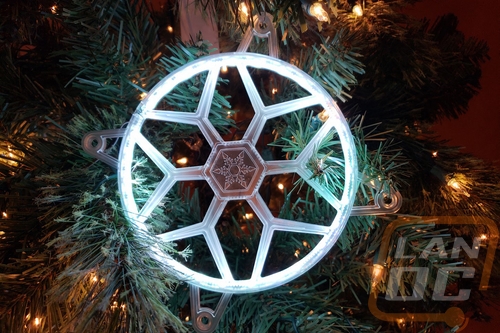 So I initially just hooked up one grill and hung it up to test everything out. Especially the electronics, while Amazon does have good stuff most of the time you really never know when you cheap out and go with brands and products you know nothing about and burning my place down wasn’t at the top of my list of things to get done this winter. Hooking up the power supply to the controller was as simple as hooking the cable to the transformer box and then plugging it into the 12v plug and into the wall on the other end.

Getting the controller completely up and running, on the other hand, wasn’t as plug and play. Well, it did power up and was flipping through the colors right away. But I spent more to get the app-controlled smart home controller right? Well, the QR code provided didn’t work and when I went to the play store there were multiple apps with similar names and logos… Just great. I did find the one that worked, I think. For starters, they require you to sign up for a cloud account and then you have to feed it your wireless sign in info as well. Basically about the last two things I want to do with some random unknown app that might not even be the legitimate app. A safe email and completely random password later I was logged in but I had no luck at all getting things up and running on the wireless. After some time I found that you have to be running a 2.4 MHz wireless network, 5.0 isn’t compatible and that is all I have setup. So I ended up skipping out on that feature and gathered up the remote. Guess I could have saved myself some money there lol.

The remote does require you to pull the battery saver out, but after that, it worked. MUCH easier. The controller has two pigtails on it, one for the RGB connection and the other has an IR receiver on the end. What I learned with this is when you install your controller in your tree or whenever you are using it, be sure to tape that IR cable down somewhere pointing at where you will be using the remote. I thought it would pick up and it didn’t and I had to go back and move this later.

From there I just started hooking up two grills together and hanging them up. The “daisy chain” idea does work for this but what I found was you have to plan out your wiring a little. You only really gain about 4 inches of additional reach for each grill hooked up. Unless you have 50 in your tree you will need to make sure you are leaving room to pull the cable up the middle to reach the top. That leads me to my other lesson. Our 4 pin male to male connection works but it can be pulled apart. You can get everything hooked up and working and as long as you don’t touch it I think you will be fine. But if you have kids or cats you might want to tape those connections together to keep them from pulling apart. I ended up doing about half and half, taking the two grills together as I hung two at a time but not taping the connections I made after hanging them. It pulled apart a few times on me but after that, it has been fine.

So how does the setup look? Well here are the four main colors, the controller had a lot of sub colors available but I wanted to show the four colors it switched between in the flash and fade transition modes. 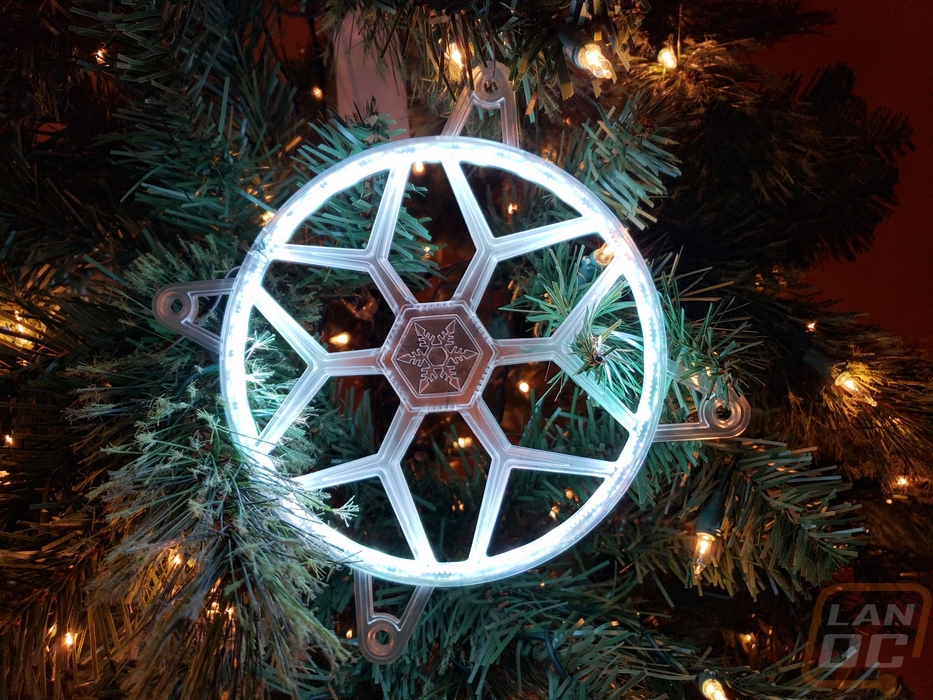 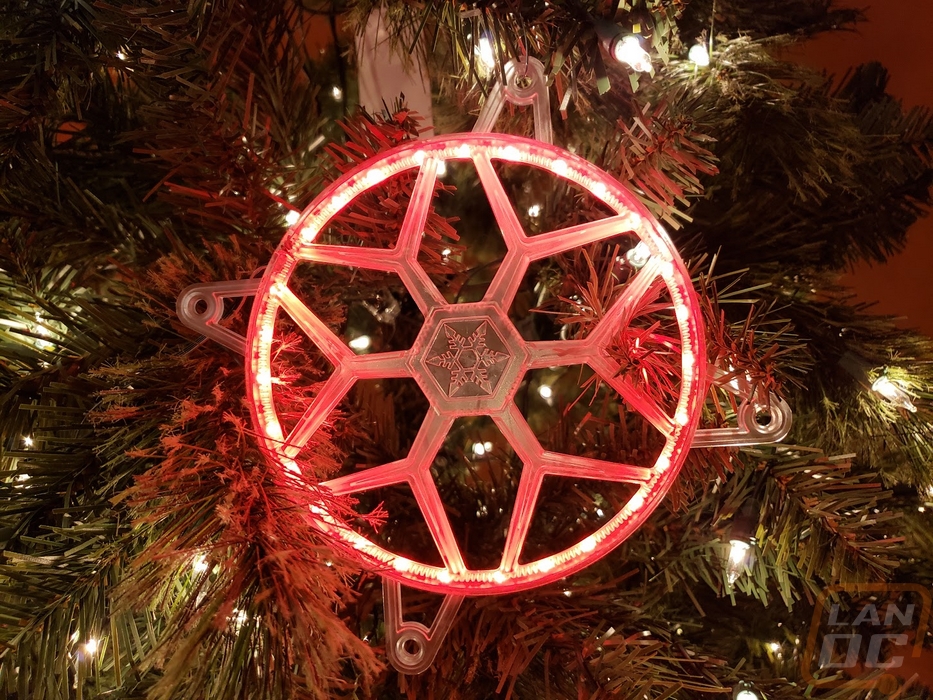 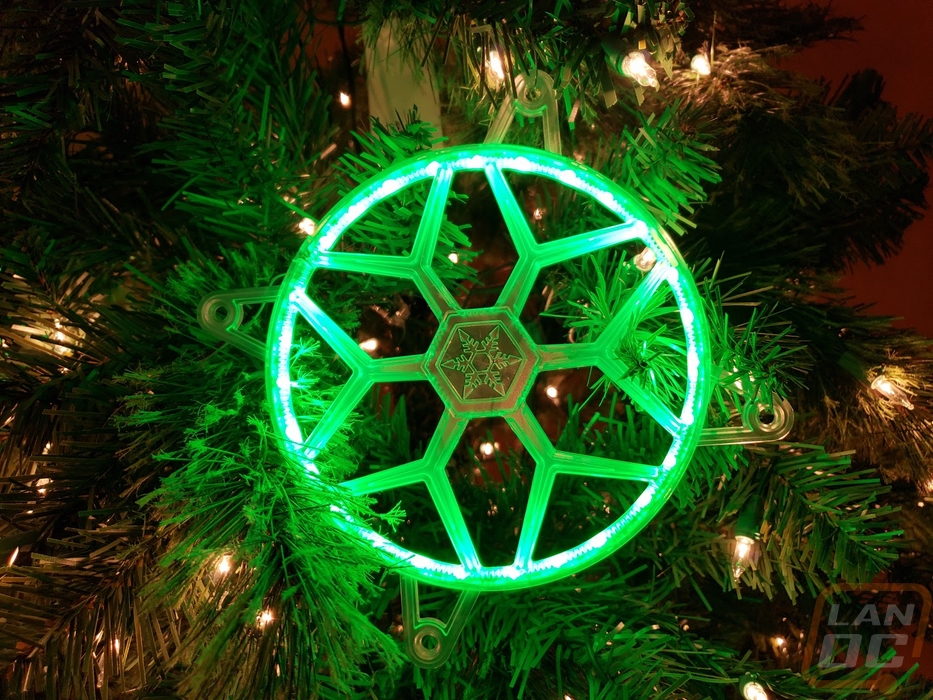 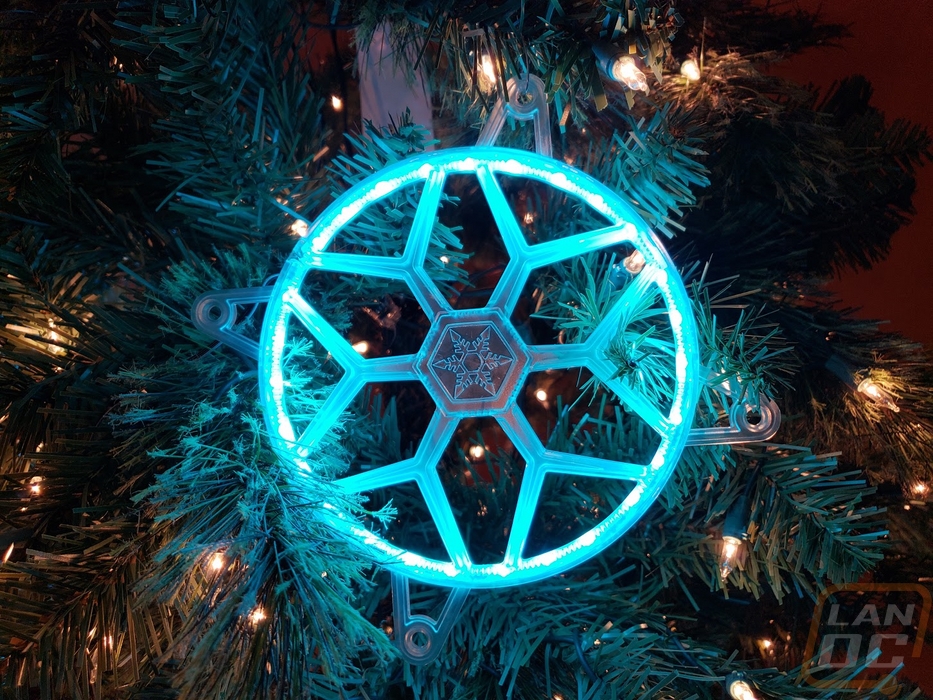 I think if our tree had the multi-colored lights it would have looked better, especially when I had it in the transition mode. I played around with a lot of colors but settled on blue. The grills were extremely bright as well, it doesn’t really show up in the pictures below but the entire room changed colors along with the transition mode. That is why I had to lock it to one color. I also ended up turning the brightness down and it made a HUGE difference as well. To most people, they are RGB snowflakes but to me I know I was able to add a little geekiness to our tree with more to come. 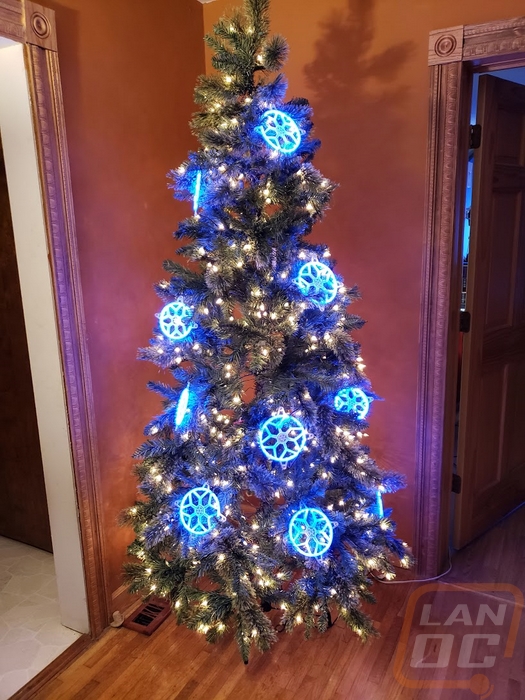 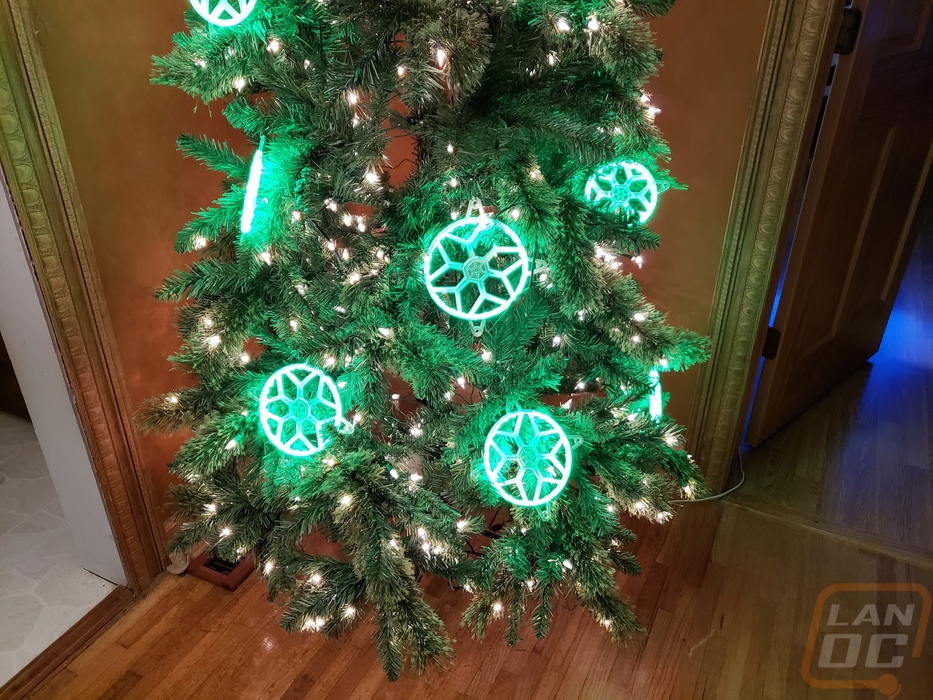 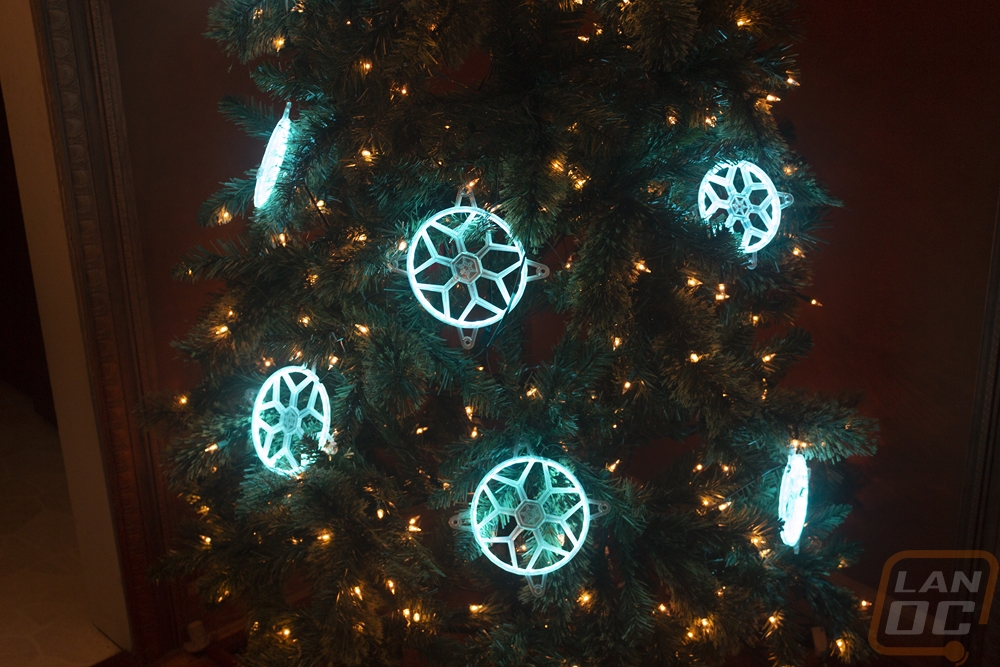 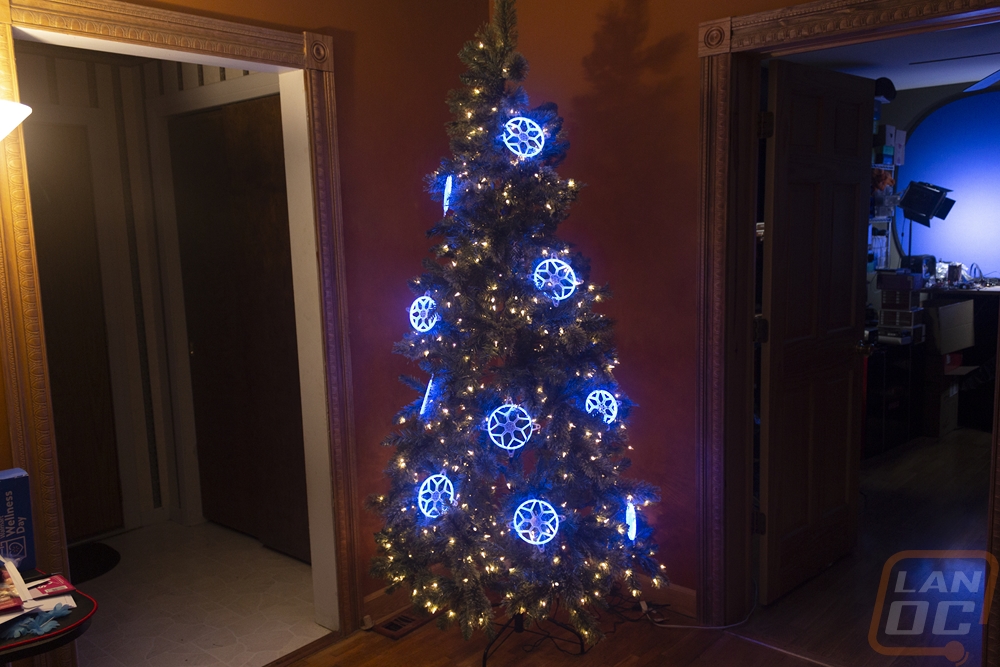 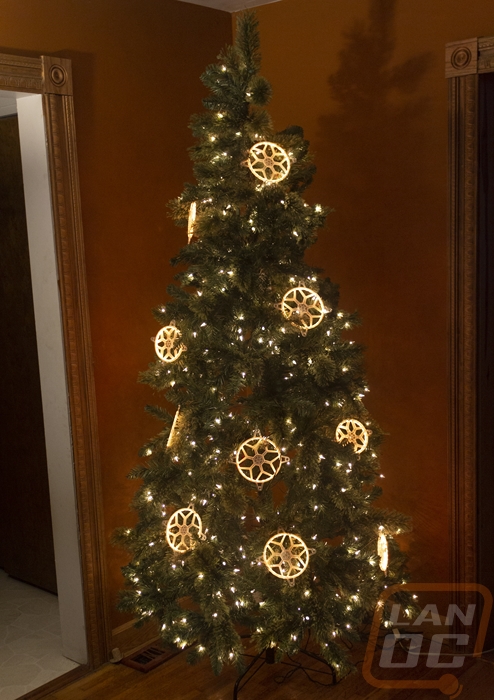 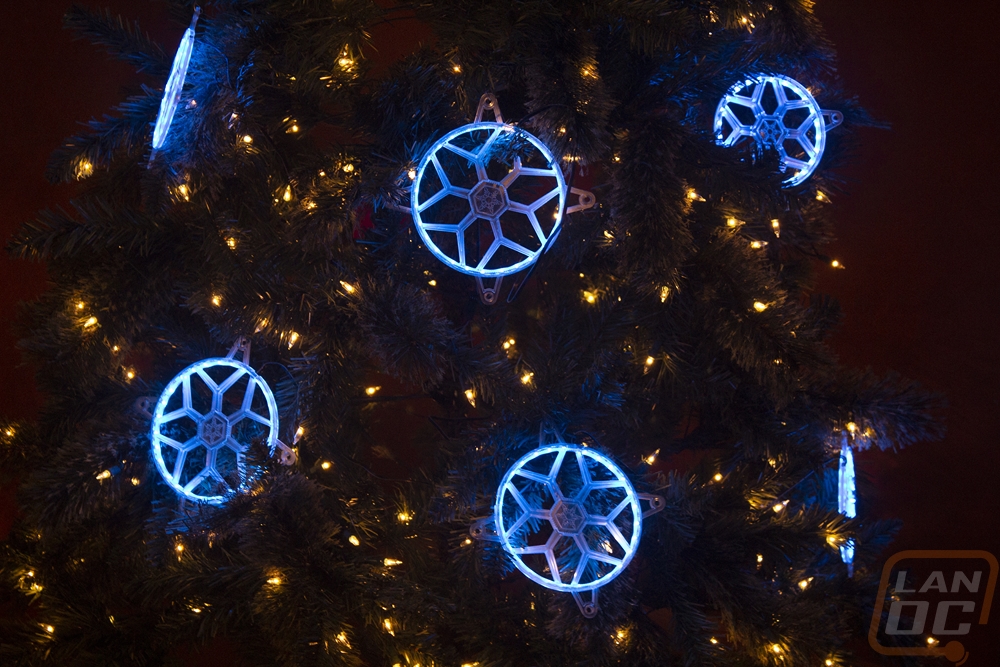 Would I do anything different? I actually ended up loving the look of the grills being ornaments, as did my wife surprisingly. I think it also opens up other options that could look good with this as well. Maybe just one or two grills and then underglows or back glow LEDs into the corner would be a little more subtle, especially if it was with individually controllable LEDs where I could do more lighting effects and add more than one color at a time. I also would have saved myself money and gotten the basic controller. Maybe I will get this one working later, I just have been stubborn and don’t want to change my wireless network. Not to mention the security risks. Now the obvious thing people are going to mention is the cost of the FG121’s and FG141’s. Both are almost $15 and even for PC fan use that is a little expensive so the reality of anyone picking up 10 of these for $150 isn’t very likely. Really I just thought this was an interesting possible use and I was curious what adding RGB to our tree would be like. In other words, if you have a few of these around go for it, or maybe you have a lighting kit with controller already, you could pick one of these up and have one along with backlighting or underglow for your tree. But don’t go full crazy like I have!

You might call him obsessed or just a hardcore geek. Wes's obsession with gaming hardware and gadgets isn't anything new, he could be found taking things apart even as a child. When not poking around in PC's he can be found playing League of Legends, Awesomenauts, or Civilization 5 or watching a wide variety of TV shows and Movies. A car guy at heart, the same things that draw him into tweaking cars apply when building good looking fast computers. If you are interested in writing for Wes here at LanOC you can reach out to him directly using our contact form.
Discuss this article
Log in to comment
Posts in discussion: SilverStone RGB fan grills, Christmas decorations?

We have 693 guests and one member online