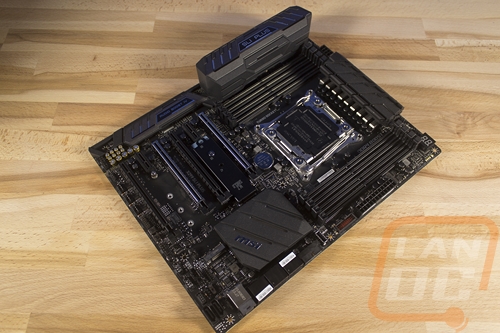 So the X299 SLI Plus ends up being in a weird spot. It isn’t really a budget board, you are still getting nearly all of the same features as the high-end X299 boards without all of the flashy fluff. It has a ton of USB connection options, both on the rear I/O and inside with 5 different USB headers. I really like the blacked out look as well as the inclusion of a rear I/O shield. This is from what I can tell the cleanest looking X299 board on the market. You even get a good BIOS and solid performance in all of our tests. For cons I didn’t really have any glaring issues when I first went through the board's features, I just would love to see WiFi be included. As a workstation board, I can see it being needed and I would gladly give up one of the two Intel NICs for it. I also think the VRM cooling might be pushing it if you plan on overclocking or running the upcoming high-end CPUs.

The reason the SLI Plus feels like it is in a weird place is because on any other platform this would be a high-end board. But with X299 it actually is a low to mid range board, with MSI just having one option below it. It is still a little too expensive for anyone looking at Kaby Lake X, not that I would even recommend looking at that. But it does end up being the low key value if you want a clean looking build on the X299 platform.

Pricing has the SLI Plus at $259.99 for the MSRP but it looks like X299 boards including this one are already getting some discounts less than a month after the launch. You can get this board for $229.99 on Amazon and for even less on Newegg when you include the mail in rebate. If you are planning a crazy off the wall build with the soon to be released $1000+ CPUs that Intel is bringing out to match ThreadRipper I don’t think this is the board. Paired with the 7800X or the 7820X though this might make for a powerful but clean looking build. 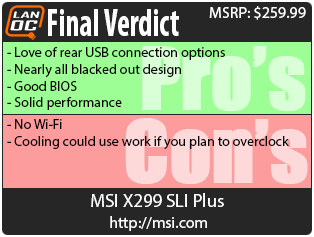 You might call him obsessed or just a hardcore geek. Wes's obsession with gaming hardware and gadgets isn't anything new, he could be found taking things apart even as a child. When not poking around in PC's he can be found playing League of Legends, Awesomenauts, or Civilization 5 or watching a wide variety of TV shows and Movies. A car guy at heart, the same things that draw him into tweaking cars apply when building good looking fast computers. If you are interested in writing for Wes here at LanOC you can reach out to him directly using our contact form.
Discuss this article
Log in to comment
Posts in discussion: MSI X299 SLI Plus