First off, for the overclocking novice, I do not believe that this board’s software is the greatest.  But didn’t I go on about how great I thought it was earlier?  Yes, but the auto tuning software increases voltage to the RAM and processor, and without proper cooling it is easy to get in trouble.  But if you go in to “Manual Mode” there is no explanation (without Googling) about what some of the settings are.  The Gigabyte overclocking solution did not deliver as high of results, but the software also only changed the multiplier on the processor, increasing the speed without bringing on the added heat.  The ASUS software is a more robust solution, and I do like it better, but at the end of the day for novices I think it could be possible for someone to get into a bit of trouble.

But when comparing software, the ASUS suite is a nice single download from the ASUS website instead of so many different pieces on an ASUS board.  But one issue that I did discover is when I attempted to download a firmware update for the board (or check to see if one is available, more importantly), the download would fundamentally time out but not tell me if it was downloading one of if there was not one available.

The board was painless to install, and since I already knew how to install the Antec Kuhler 620 with that cumbersome install process, I was able to get everything up and running quickly.

At $179.99, the board may seem "pricier" than what you are looking for to in a budget build board, and granted it does have some features that I will never use.  But looking at it all, the onboard graphics are a great option, especially if I need to cannibalize this board for other functions.  But really, when you look at everything as a whole, it is a great buy for a good board.  Though it has not been mentioned, the USB boost is a great add on that in lab testing has shown a significant improvement on USB 3.0 speeds.  Also, and the reason why I ended up with the board, is the ability to support SLI.  Many boards support Crossfire, and I understand why, but it is nice to have a board that'll do both, and this will definitely accomplish that.

The ASUS should also be a better quality board, but I will reserve complete judgement on this board in that arena until a later date.  However, ASUS does make good stuff, and they have been making it for milennia, so no worries there.  Why?  Because they warrant the board for 3 years, which is awesome!

It's not a perfect board, but it is awefully darn good at what it does.  As time progresses I hope to play around with it more to better tweak the performance. 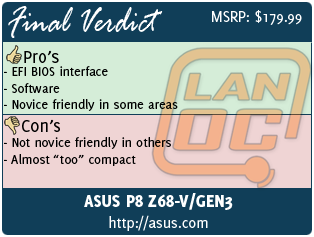