Let’s go over the Intel DX79SI’s features and layout. But first here are a few photos of the packaging it comes in. 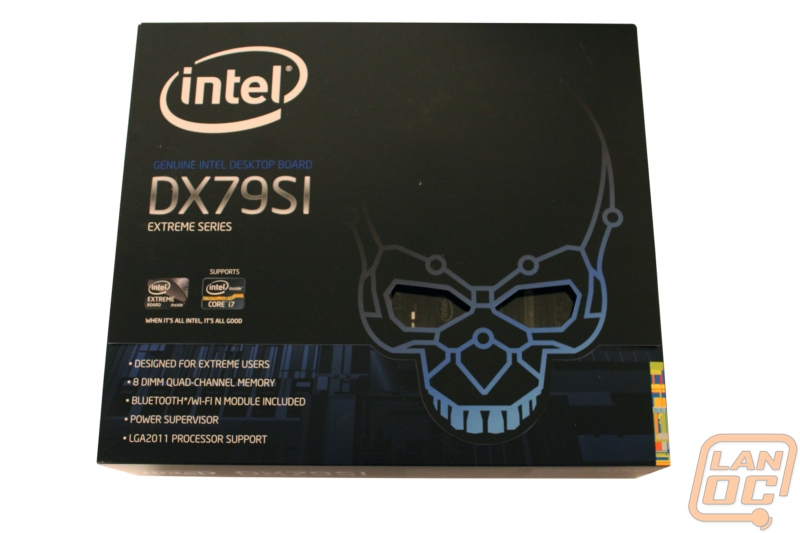 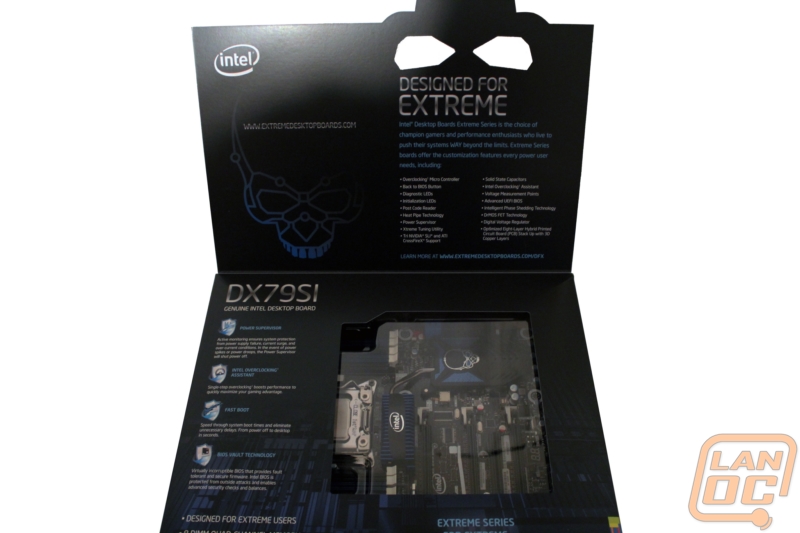 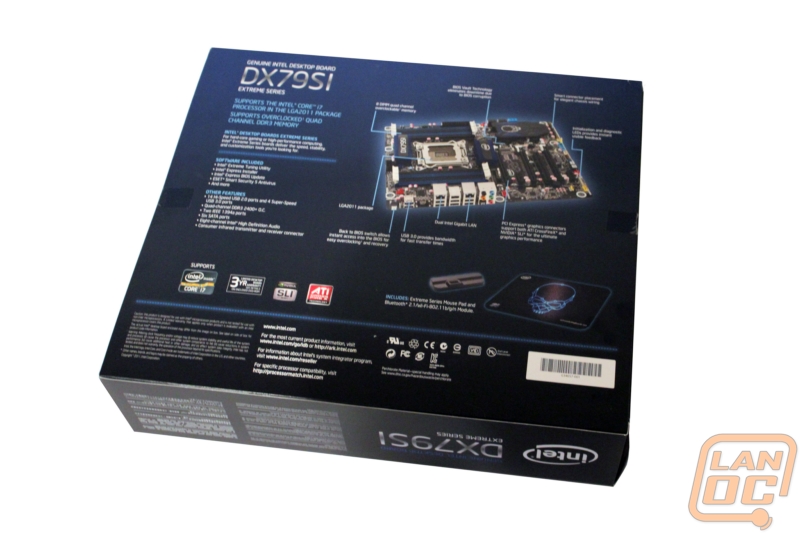 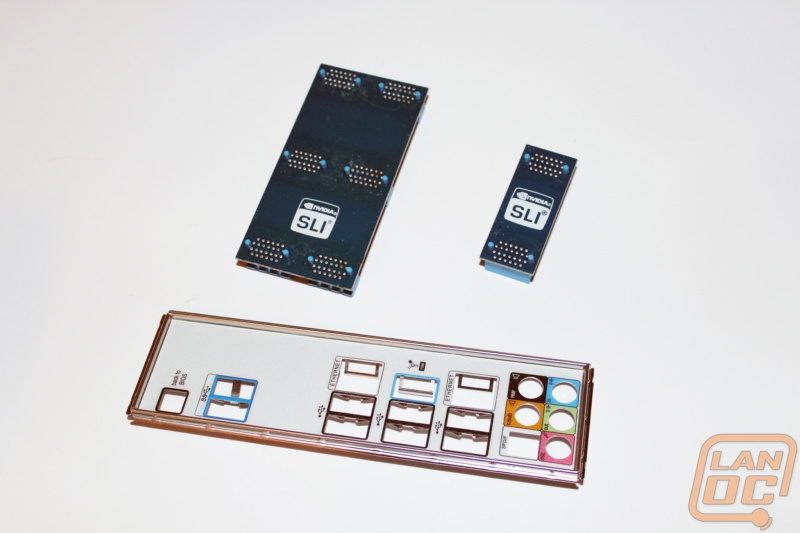 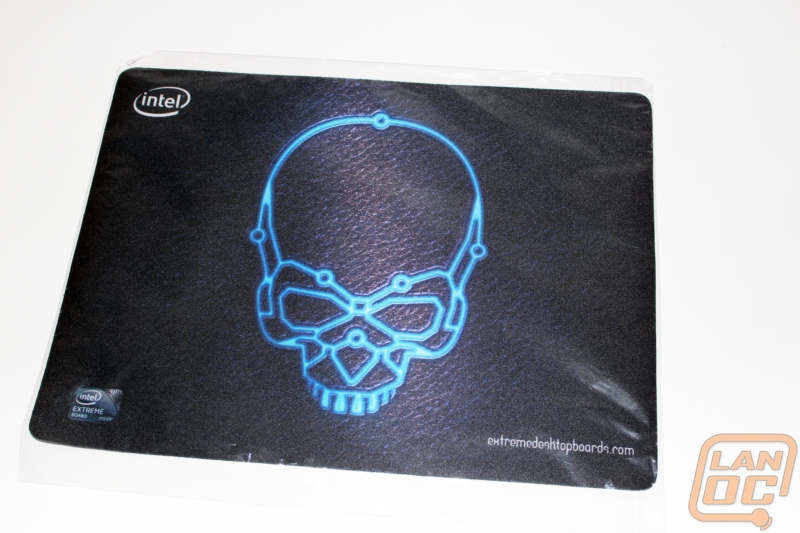 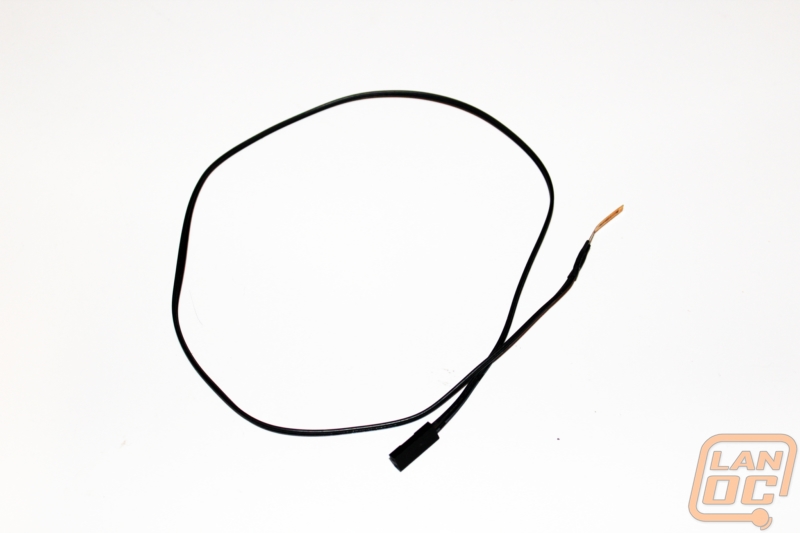 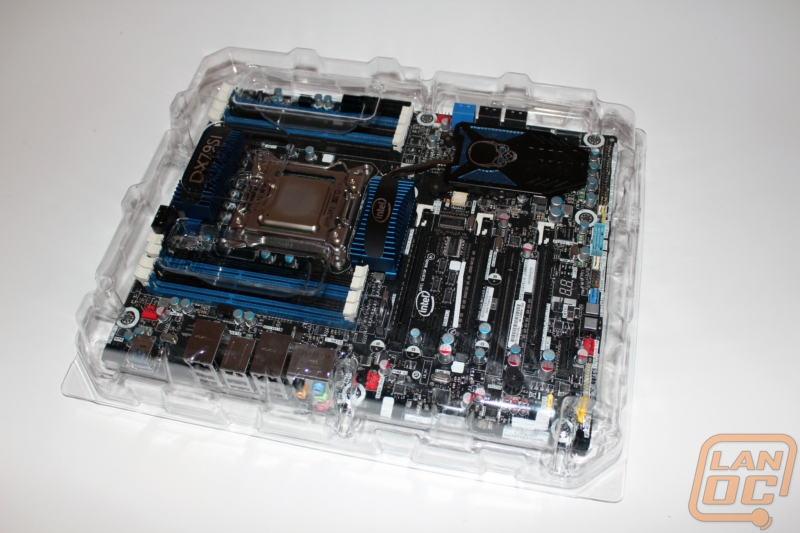 Starting from the backside there are a few noticeable things. First its nice to see Intel going with a black PCB like some of the other motherboard manufactures. Without even flipping the board over its easy to spot the eight RAM slots! 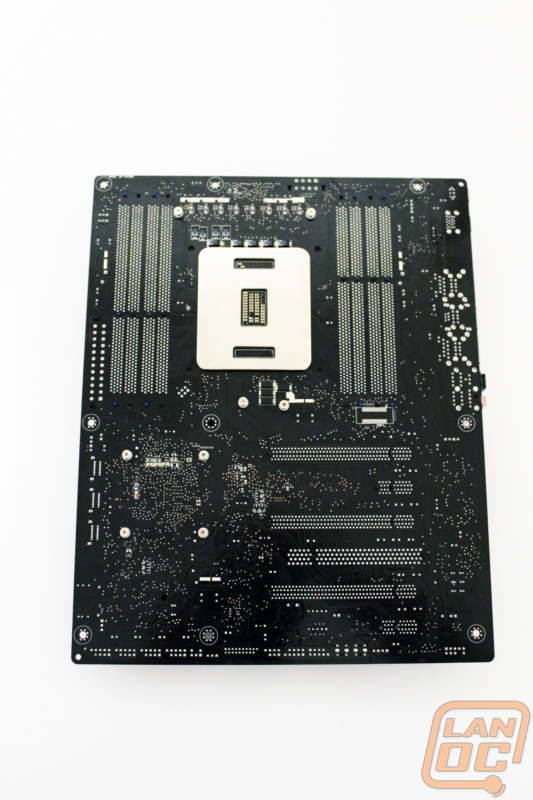 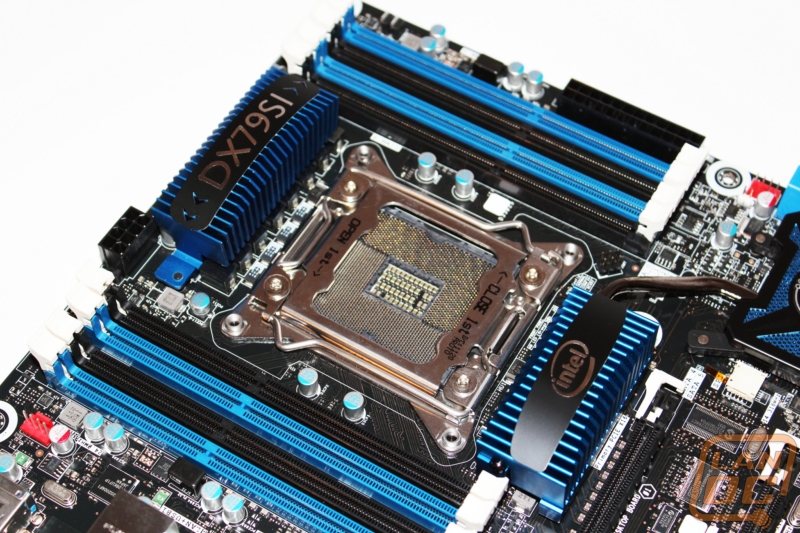 Starting in the top right corner you can see the new LGA 2011 socket surrounded by RAM slots. The new X79’s quad channel chipset means a total of 8 slots when you are running two sets of RAM. Each slot supports DDR3 and Intel has color coded the two channels in blue and black. 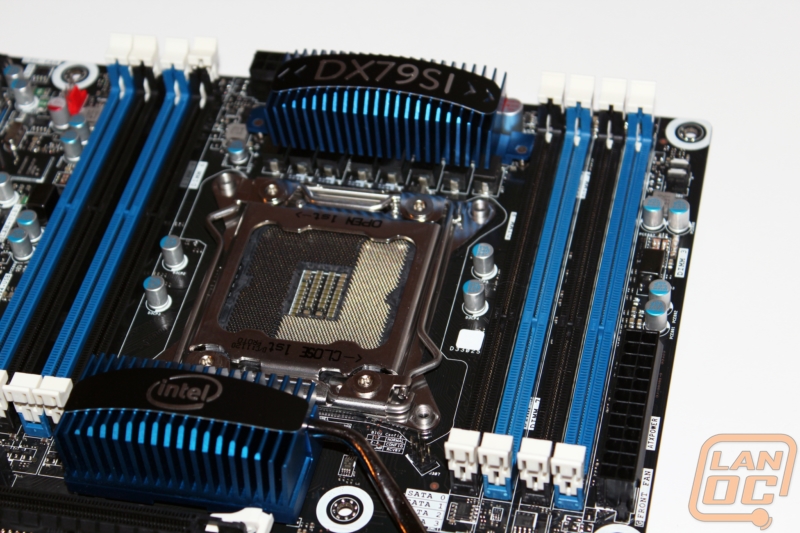 To the right of the RAM you have the standard 24 pin power connection along with a four pin fan header. Behind the pan header there is a small two pin header used to hookup the included remote thermal probe. 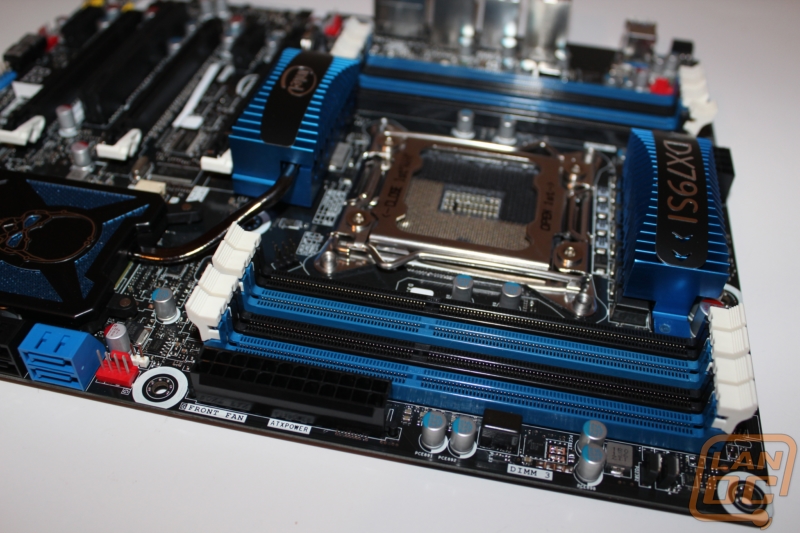 Below the power and fan headers you have all of your SATA connections. The Intel DX79SI has four SATA 2 and two SATA 3 connections. You can spot the faster SATA 3 ports because they are blue in color. 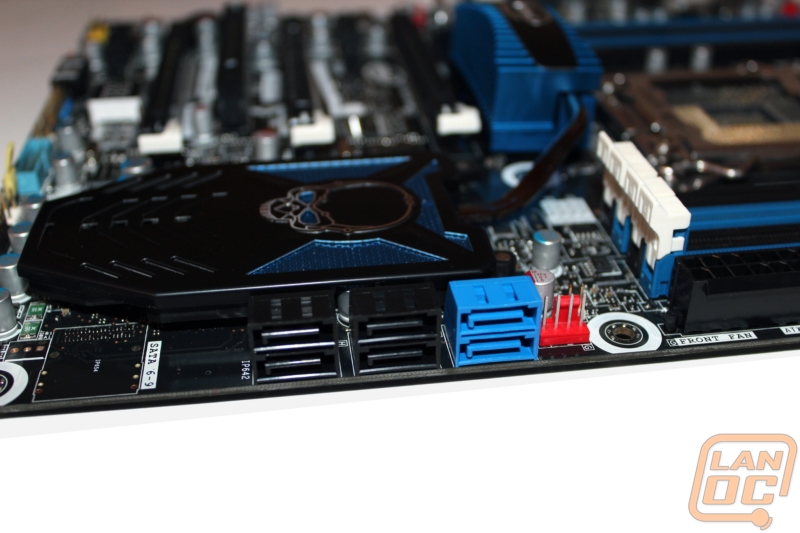 The entire bottom of the Intel DX79SI is covered in various headers. The bottom right section has four USB 2.0 headers, one USB 3.0 header, a Firewire header, and then your front panel connection. The front panel connection is toward the center of the bottom of the board and is a little more difficult to read when wiring everything up. They did color code everything to help with hooking it all up. 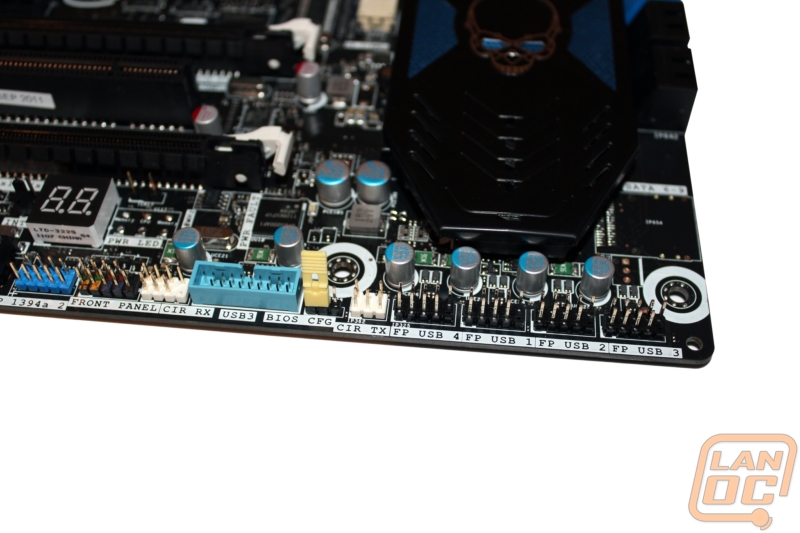 Moving across to the left side of the bottom of the Intel DX79SI you have your front panel audio header, another four pin fan header, power and reset buttons, and a diagnostic LED. In between the front panel audio header and the fan header you have a batch of small led’s that light up showing hard drive use, confirming that your CPU and memory are hooked up correctly, and ever a few that will let you know if things are getting a little too hot. 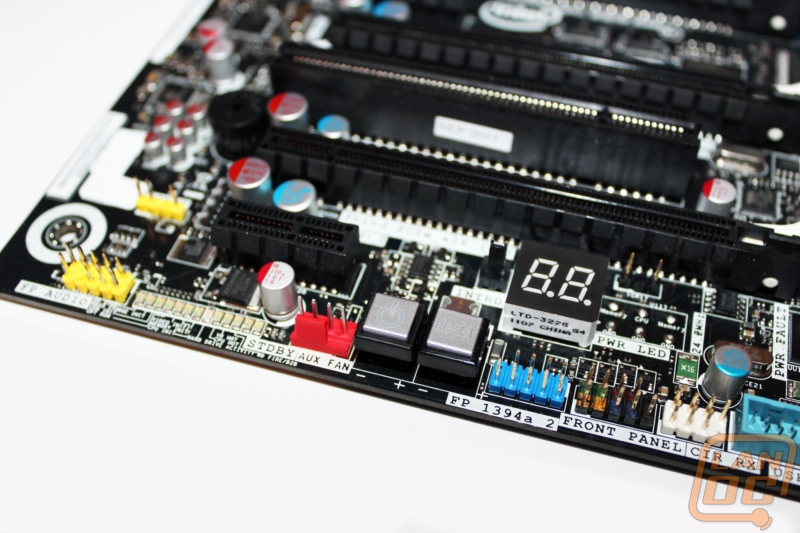 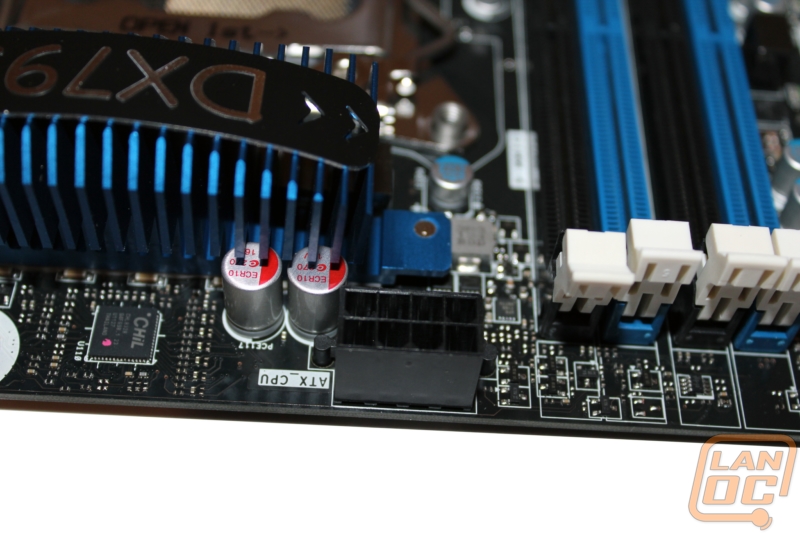 The LGA 2011 socket brought with it a new mounting design. They now use two hold down bars to keep the CPU pushed up against the 2011 pins. Working with those hold down bars can be a little tricky, so they have labeled what bar to open and close first. Once you get the hang of it, it’s not too bad, but it is different than what we are used to. 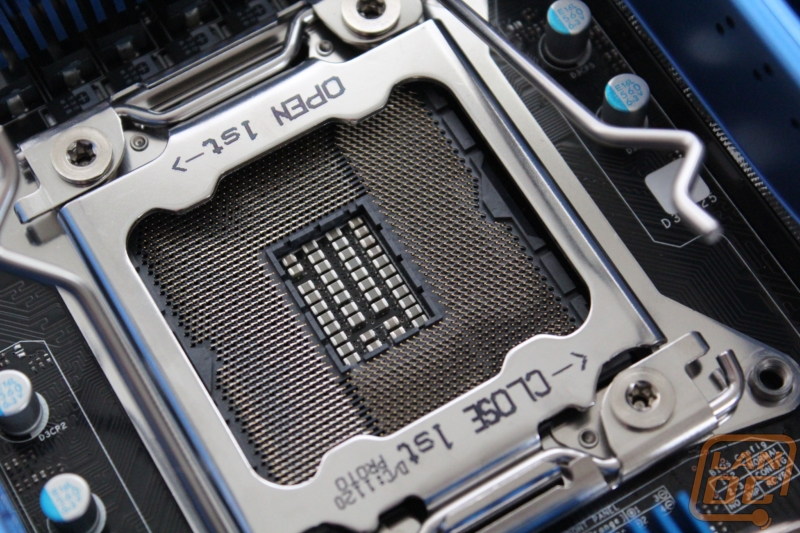 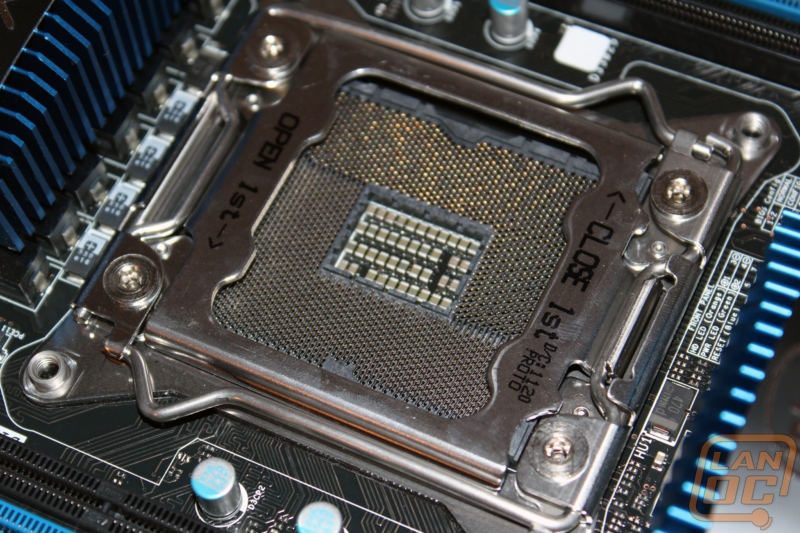 The best part of the new platform is all of the extra PCIe Lanes that are available. The Intel DX79SI itself has two full 16x slots along with a third x8 slot for GPU use. You also have two PCIe x1 slots and one legacy PCI slot for those that need it. You will also notice they went with a push down design on the PCIe slot locks. This works fairly well but lacks the wing design we have seen on other boards that makes reaching the locks easier in some situations. I should also point out that the top slot lock is Very close to the heatsink just below the CPU socket. I carved my finger nail up really good trying to remove our video card during testing. 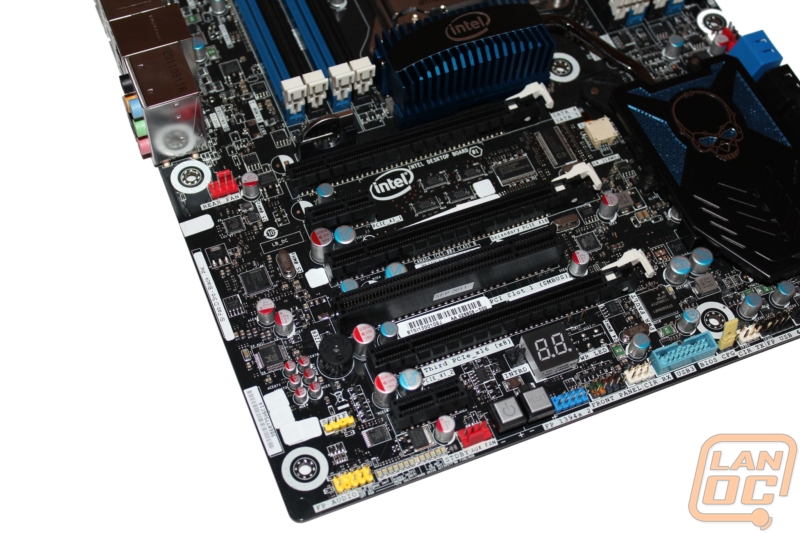 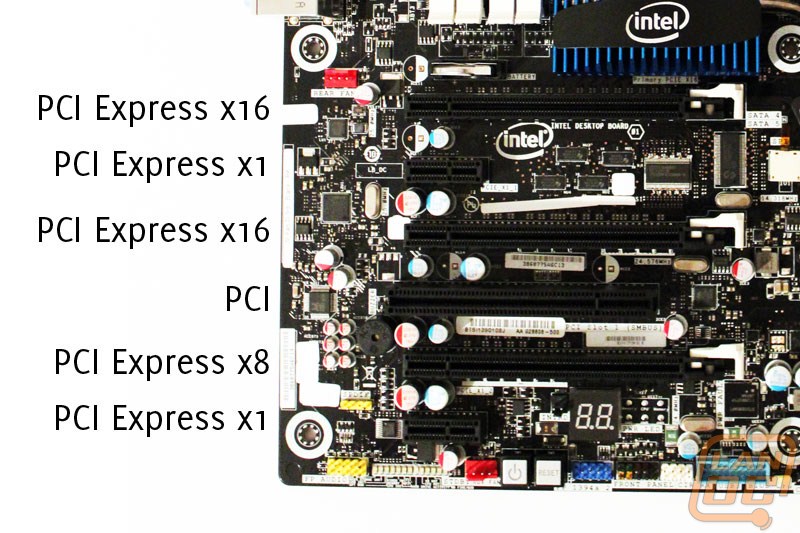 The rear I/O panel on the Intel DX79SI seems a little empty compared to what we are used to seeing. But most of that has to do with the lack of any video hookups. You do end up with six USB 2.0 ports and two USB 3.0 ports. You have a 5 plug audio panel plus one optical connection. Two 10/100/1000 Ethernet ports will keep you connected and for those who need it there is a Firewire port also. 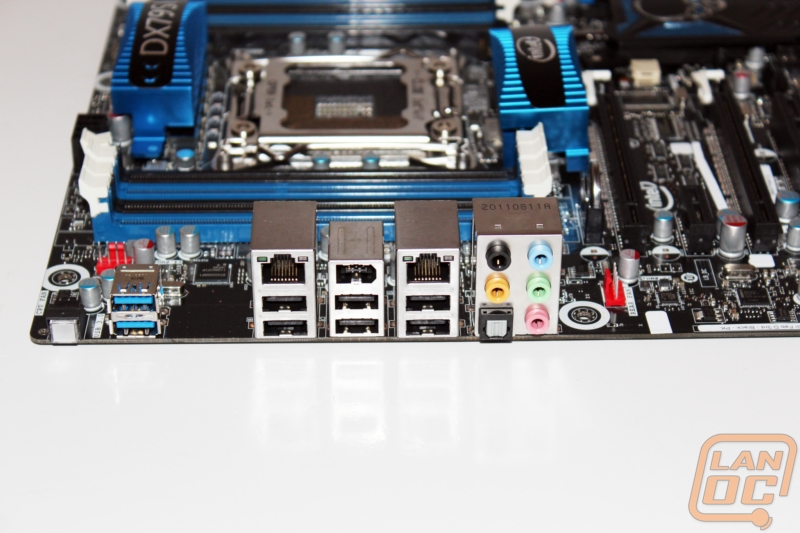 We have 1826 guests and one member online