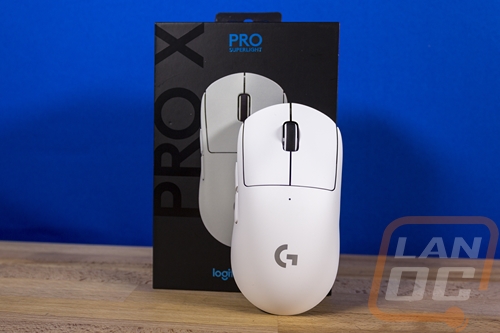 For testing the Logitech Pro X Superlight I swapped it out with my G Pro Wireless and used it with my work as well as gaming to get a feel for the changes. Because I already run the PowerPlay I didn’t need to get out the included charging cable or the USB dongle. Setting it up with the PowerPlay is easy, you need to swap out the puck on the bottom. Then with your old mouse in the software disconnect the mouse. Then you power the old one off and make sure the superlight is off then turn it on. The powerplay picks it up right away and you are off to the races.

So comfort is key when it comes to the performance of a mouse and the Pro X Superlight has the exact same shape as the G Pro Wireless that I already use daily. So switching to it wasn’t a problem at all. But as I mentioned in the previous section the shape is ambidextrous and is close to the Sensei or FK1 and is smaller than mice like the G703 and the Deathadder. If you have a medium-sized hand I think it will fit well, but people with a large hand may want something a little larger. For me my thumb lands right at the middle between the two side buttons and the back of my wrist sits on the mouse pad and under my knuckles sits at the peak of the mouse which is how I like to hold the mouse.

The new lighter weight is noticeable right away when using the Pro X Superlight but it is the combination of that and the PTFE gliders that make it feel light and nimble when moving it around. A lower weight helps with quicker movement and it also means less strain in the long term. As someone who picks my mouse up often it also means it is easier to hang on to when you lift it which isn’t something you think of until you compare between two mice of the same shape like the Superlight and the G Pro Wireless. 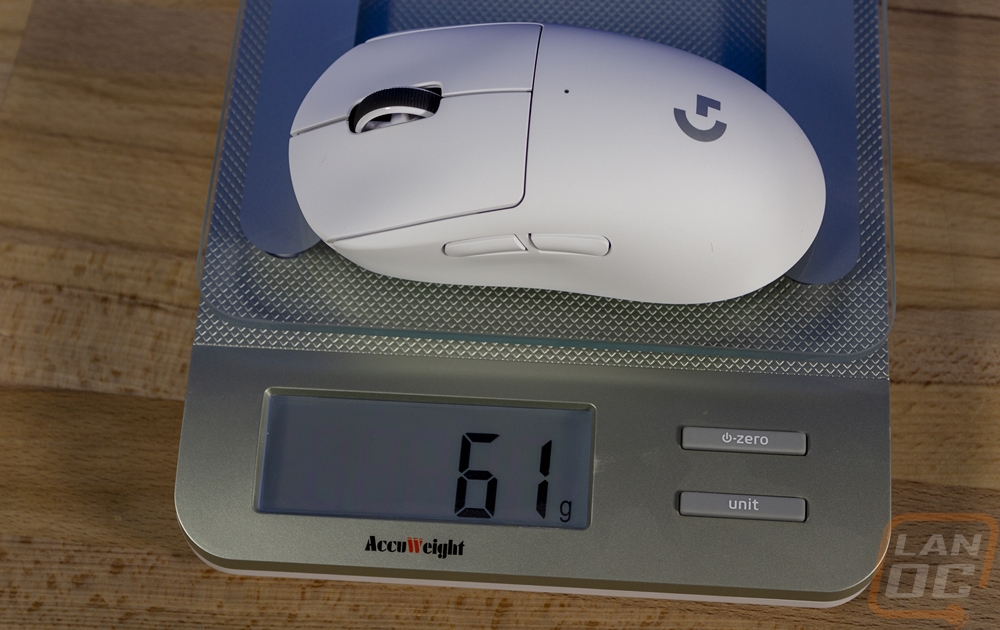 As for the 20 million click Omron switches, I cant attest to how they last long term. But I am loving the solid click that they have. As for the Hero 25K sensor, the tracking doesn’t have any noticeable flaws or issues. Logitech is correct in saying that they aren’t adding any acceleration or deceleration. The same goes for smoothing. The Hero 25K has a max tracking speed of over 400 IPS which is great. The other aspect of the Hero sensors is their power usage which as a wireless mouse is hugely important. Logitech removing the lighting also helps with the overall battery life but here is the breakdown. The G Pro Wireless had a battery life of 40 hours with lighting on and 60 with it off. The Superlight has a total battery life of 70 hours of constant motion. So even on top of not having lighting, it has gained an extra 10 hours of life, most likely from sensor improvements. Of course, running the PowerPlay that battery life isn’t important. The PowerPlay keeps the Superlight at 80% charge all of the time without a wire between the two. 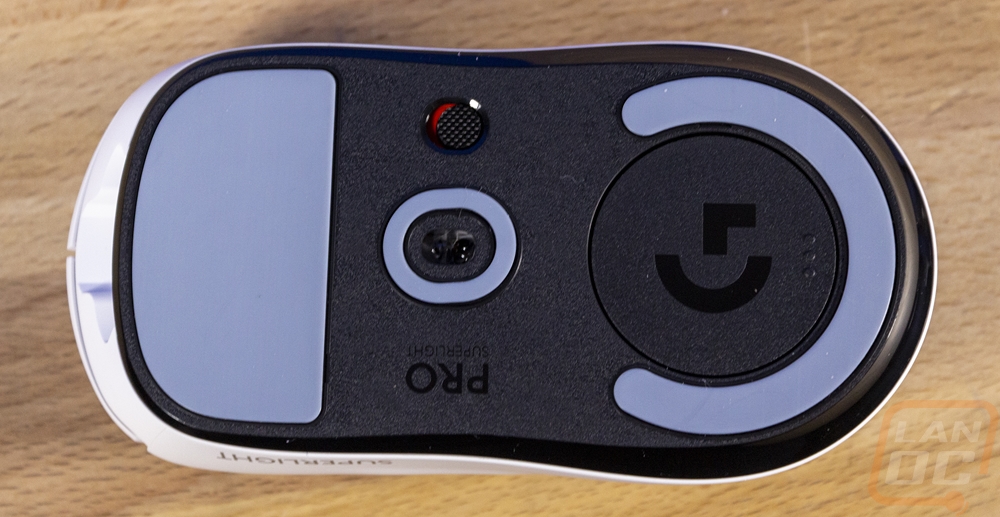 As for the software, the Pro X Superlight uses the same Logitech G hub that all of their gaming lineup uses. Which means that when you open it up you will have a list of all of the Logitech gaming products you have hooked up showing that you can pick from. In my case that is the Superlight and the powerplay. You can then click between them to open up their settings. 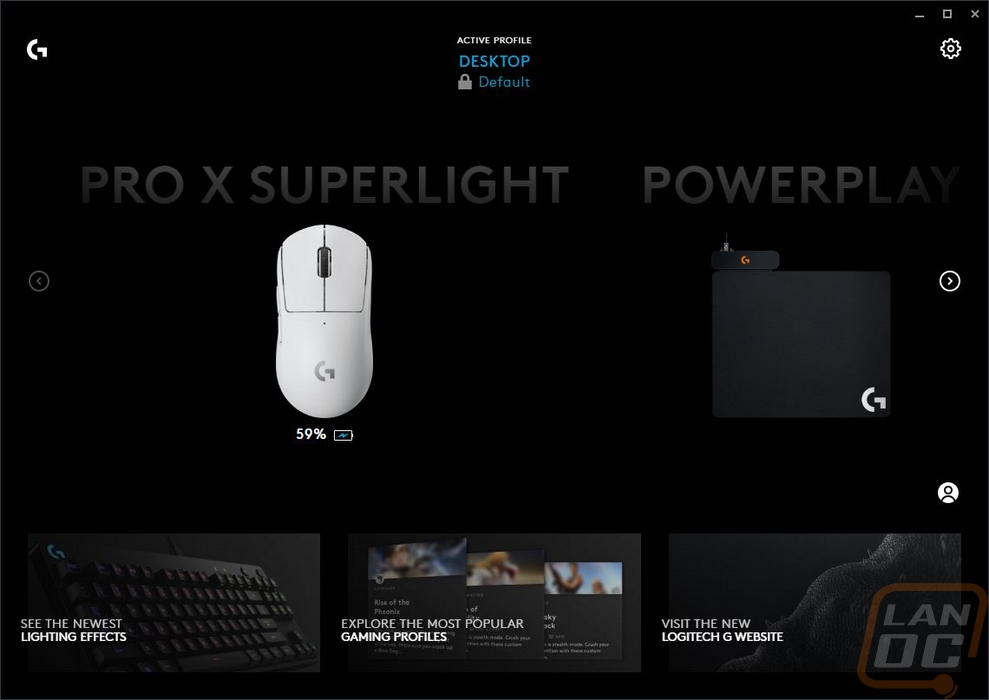 The Pro X Superlight only has two pages of options because it doesn’t have any RGB lighting to worry about. So the first tab on the left is the assignments tab. This has a picture of the Superlight on the right with lines going to each programable button. That includes the two triggers, the two side buttons, and the middle click in the scroll wheel. The scroll wheel doesn’t have side-to-side buttons, just like the G Pro Wireless. Then from there on the left, they have all of the options listed which include every keyboard key, macros, windows commands, system actions like opening programs, and anything else you can imagine. 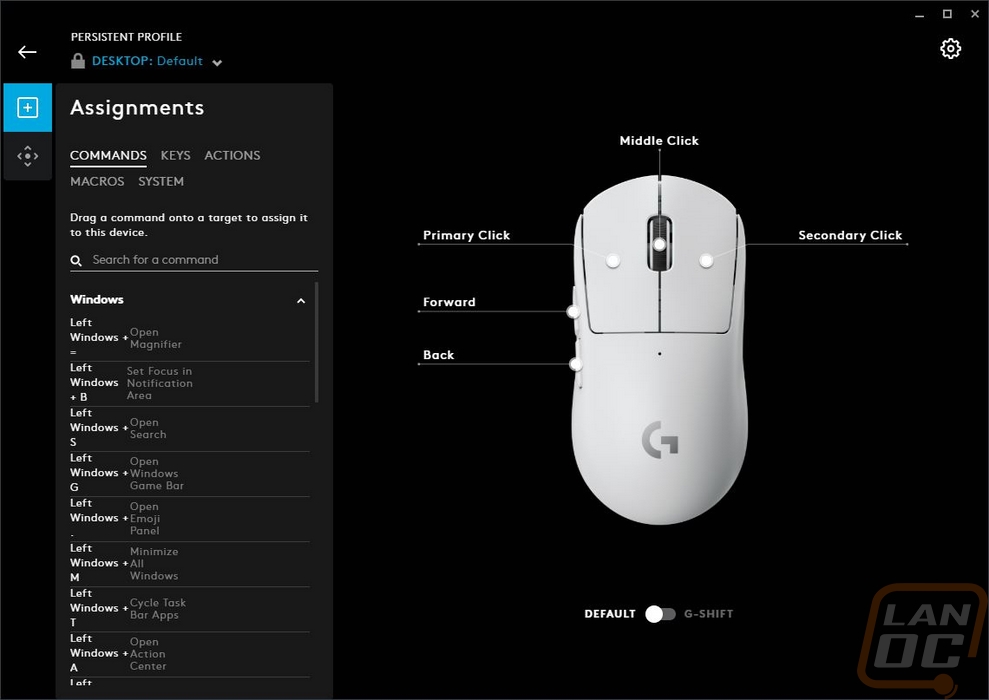 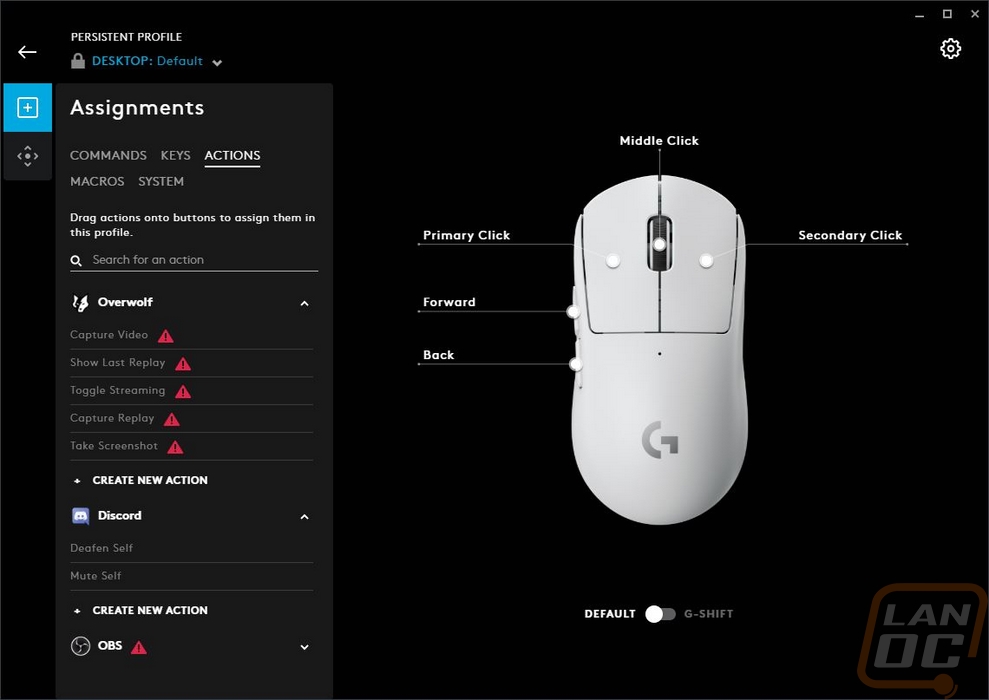 If you want to make Macros Logitech has made it simple as well. When you start to make one they ask right at the start what type you need. This lets you set it up to not repeat if you hold the button, to repeat as long as you have the button pressed, to toggle on and off each time the button is pressed, and you can create a sequence which each button press does the next action. You can record keystrokes to make the macro or go in and input each individually which includes actions, emotes, system actions, and even opening up programs. You can also add in delays between different actions if needed. 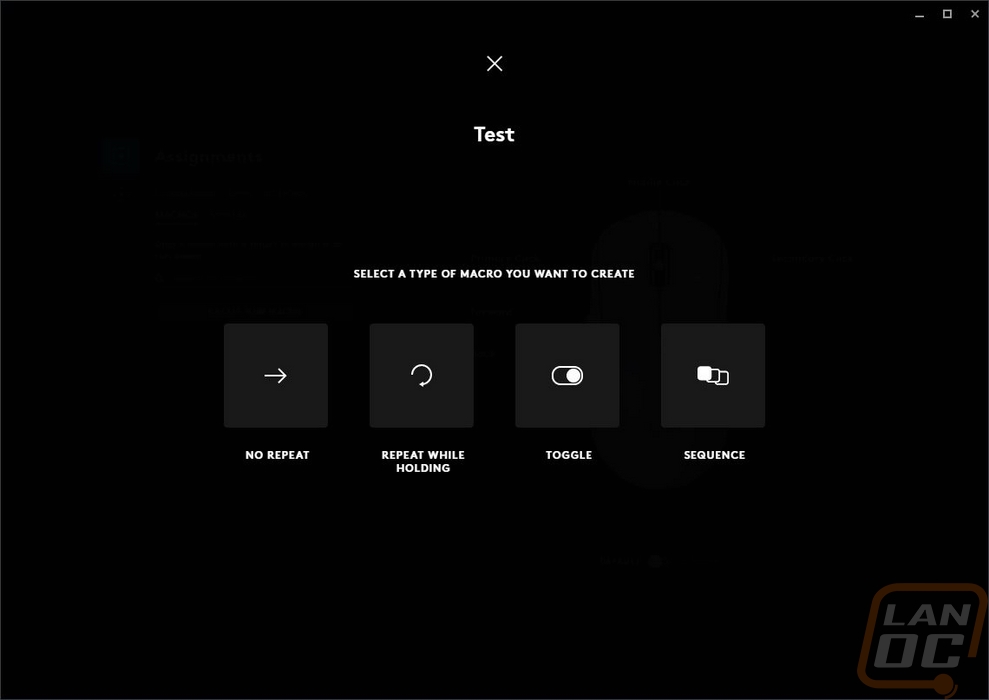 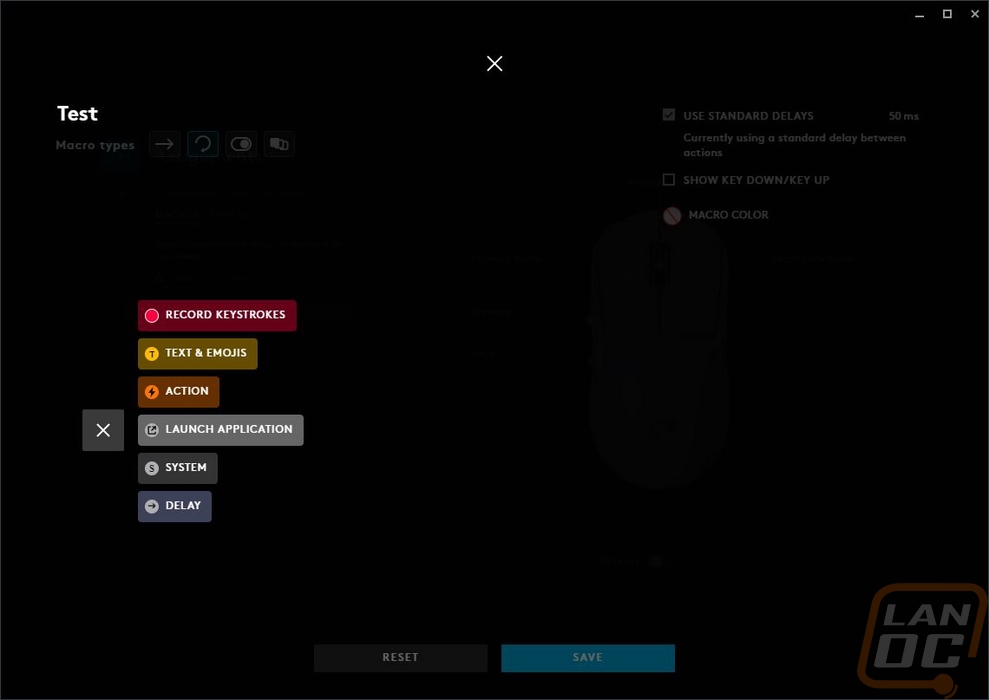 The second tab back on the main software is the sensitivity page. This is where you can change DPI settings. As we know the Hero 25K sensor goes all the way up to 25600 DPI but you can select any DPI in between in increments of 50. By default, the software is setup with five DPI settings that you can flip between but I prefer to remove all of the extra speeds so I don’t accidentally switch to one in the middle of anything important. In this picture I still have one of the extra options in white then the yellow is the default. You can also set the report rate for the mouse itself which defaults to 1000Hz. 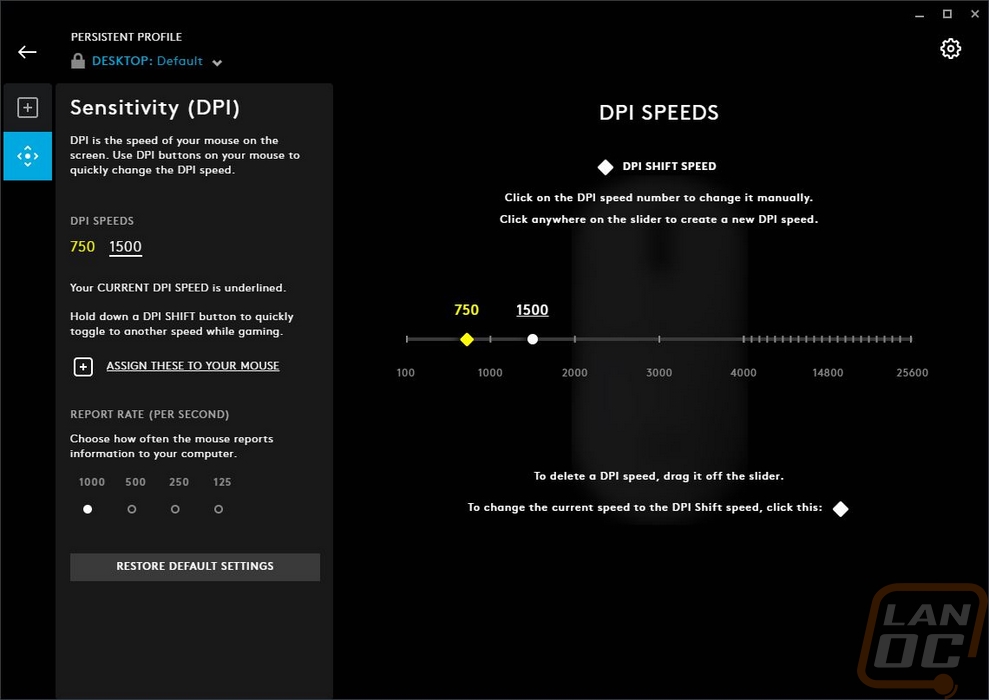 We have 1714 guests and one member online