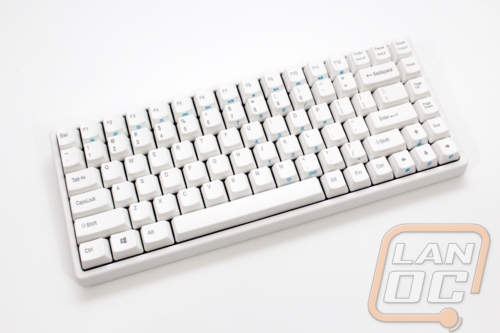 Like I said earlier, the Hero 84 is an interesting form factor. Keycool designed it to have almost all of the same functionality as a full keyboard but while only taking up a small amount of space more than a 60% keyboard. The accomplish this by adding a row up top for F keys, a row to the right, and by making a few keys smaller to slip in a direction pad. This gets us close to a TKL and then the number pad is all on a function layer. Our sample came In a great looking bright white but you can also get it in a black, the design only has a very thin bezel around it to help keep its size as small as possible and to give it a clean look. 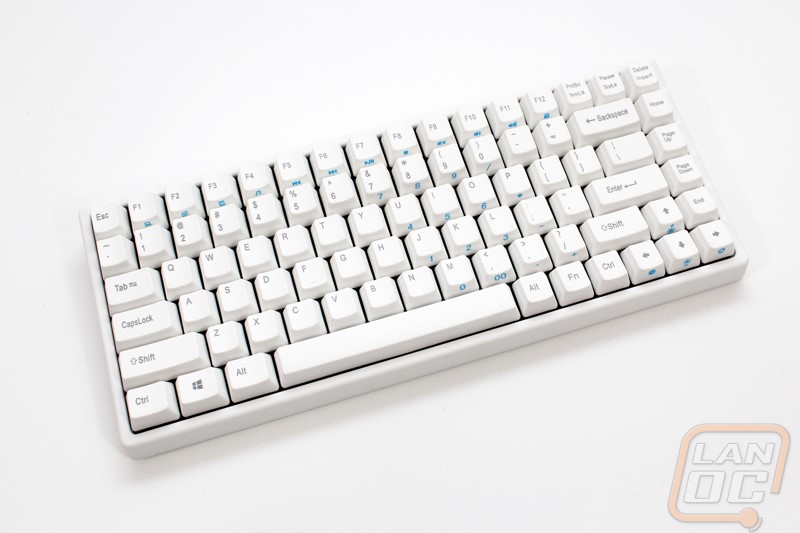 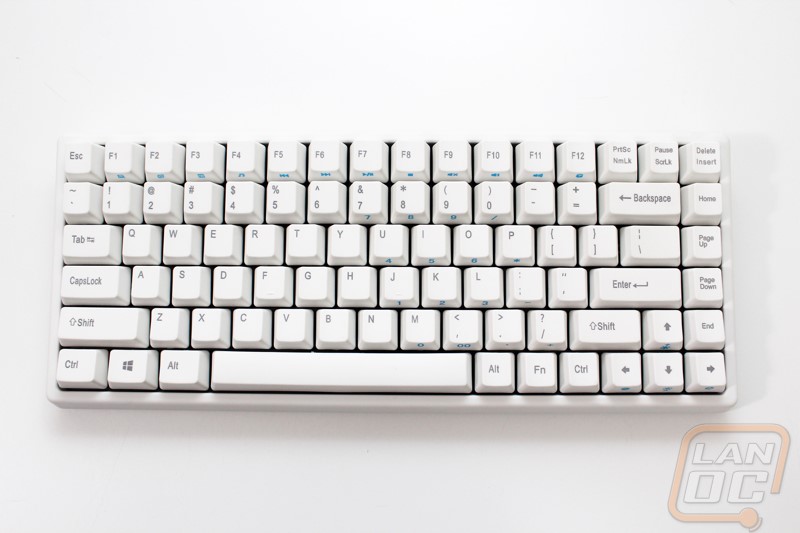 The direction pad actually pulls double duty. In addition to its normal use they also used a function layer on it for the backlighting controls. Here you can turn it on and off as well as adjust the backlight brightness to a level that works best for you. On this specific sample we have blue backlighting on the white keyboard but you can also get white backlighting if you prefer that (I know I do). 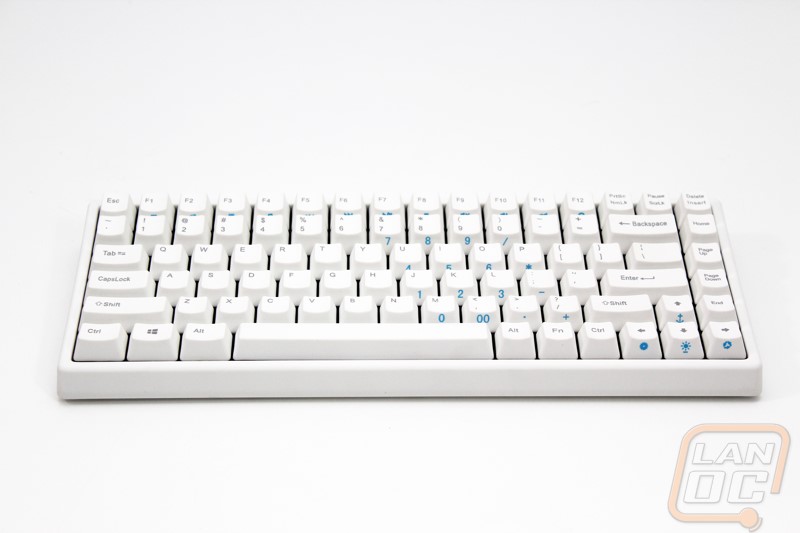 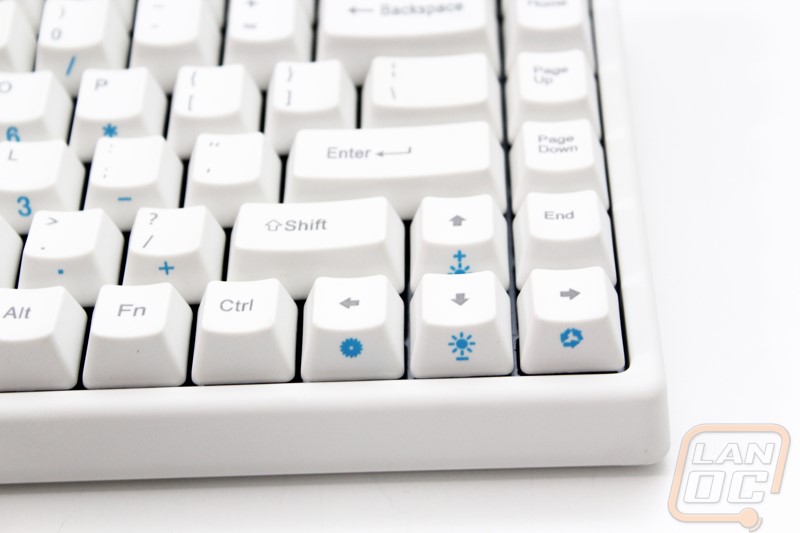 Like just about every other keyboard on the market, Keycool did slip in media controls onto the Hero 84. Due to the size of the keyboard they obviously didn’t fit in dedicated controls but you can use the function key along with the F key row to get access to your play, pause, skip forward and back, and volume controls. In addition to that they even included other functions that will open up things like your calculator for example. Each key has the function printed on the side of the keycap in a bright blue so that you can see it without it getting in the way of the main key legends. 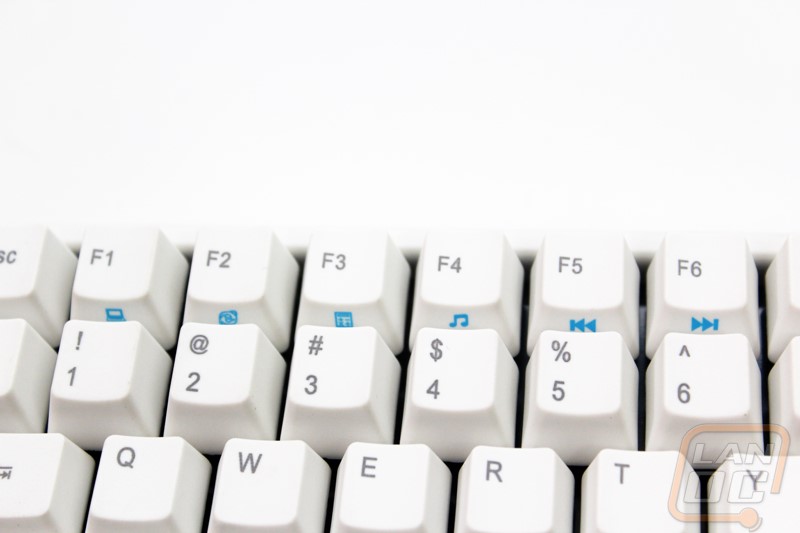 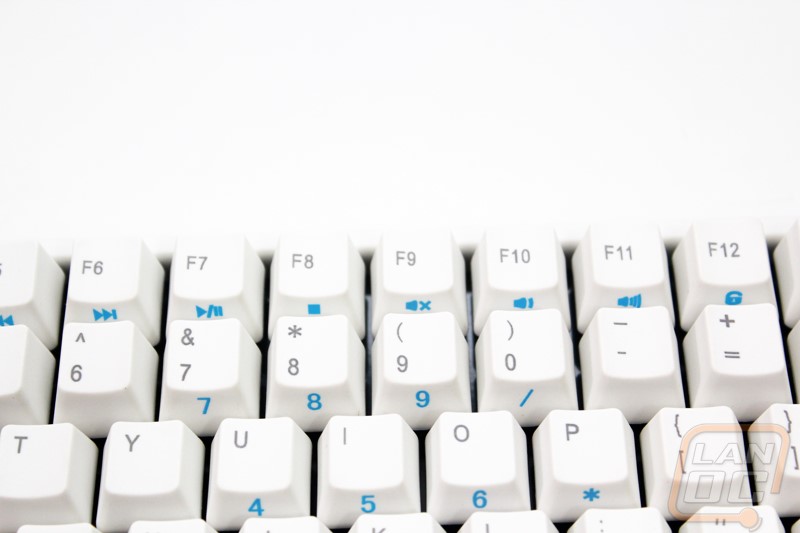 Just like the media controls, there is also a number pad built in on the function layer. Keycool did a nice job of printing the locations on the side of their keycaps in a bright blue. Having the number pad in offset keys is a little off putting but if you use it often you can adjust to it. That said I hardly ever use function layers and even though I use my number pad all day long on my main PC, I have learned to not need it because of all of the time I spend using a TKL. 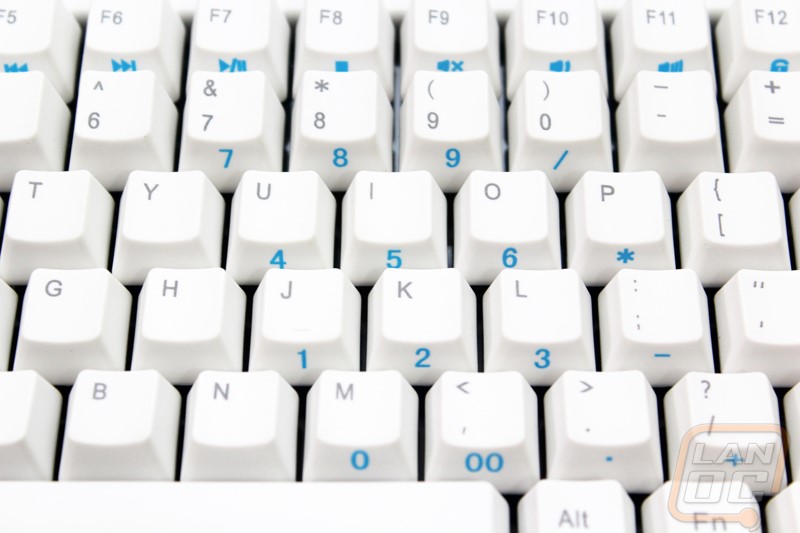 For the most part my Poker 2 60% keyboard has all of the same functionality when you add in its multiple function layers, where the Hero 84 stands out though is the inclusion of a real direction pad down in the bottom right corner. This was the one thing that I found I missed more than anything else when running my Poker 2. It’s also the one thing I never even realized I used a lot until I went to write a review, as it turns out I arrow up and down and left and right all of the time when correcting mistakes and making tables, not having it was a huge adjustment for me. So having it on the Hero 84 was basically the main reason I wanted to check it out so badly. To fit it they do make the right shift key a little shorter as well as the right side of the bottom row moving to 1u keys from 1.25u’s. In addition to the direction pad they also added all of the other keys that you would find right above the direction pad on a TKL like page up and page down and most importantly the delete button. 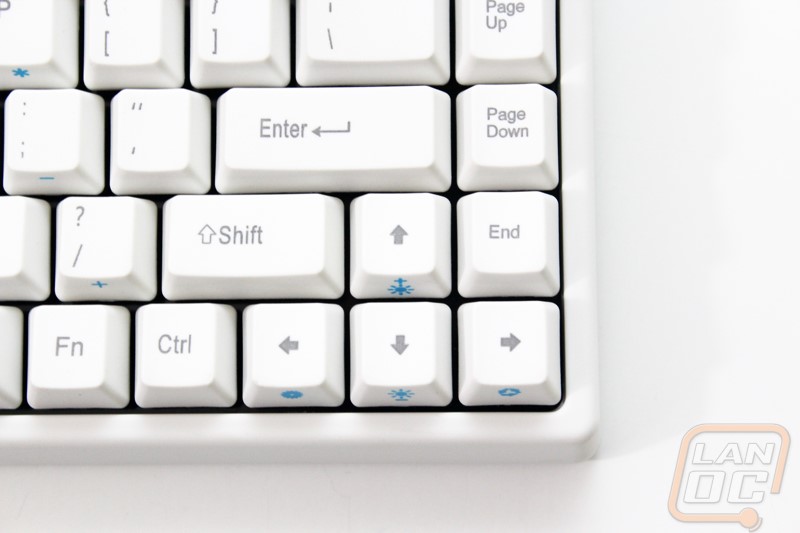 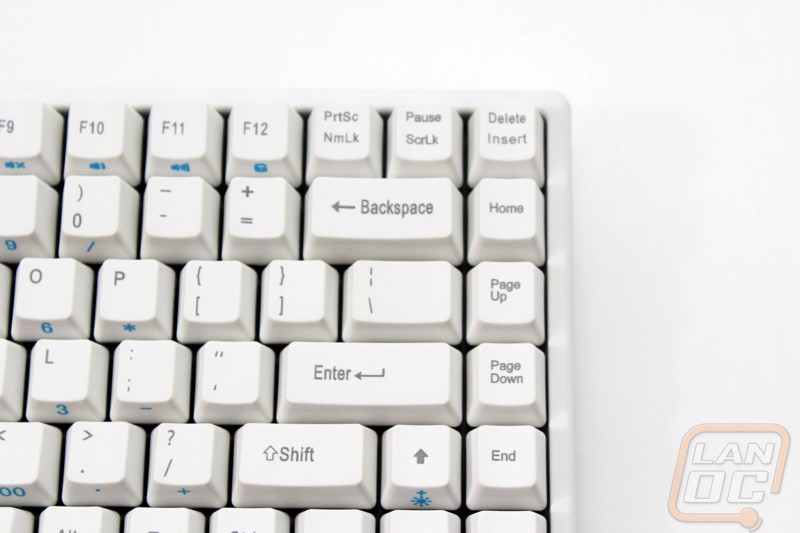 From the side profile we can see a cable track peeking out down along the bottom edge. Otherwise the side of the keyboard doesn’t have anything going on, not that it should. The keyboard does have a natural rake and the keys have an OEM style side profile giving even more angle to everything. 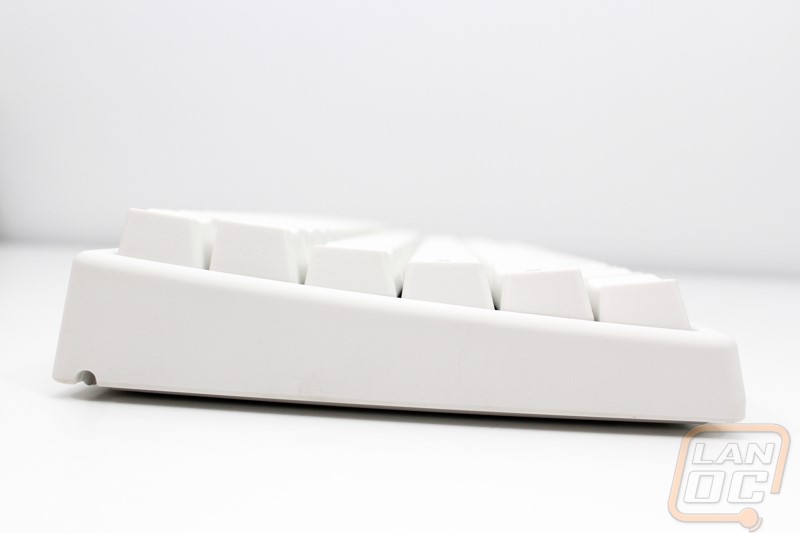 The bottom of the Hero 84 is as white as the top with the exception of the black product sticker in the middle. It has our serial number as well as the required CE and FCC logos. For feet the Hero 84 has four rectangle rubber feet in a bright white that matches the rest of the keyboard. For those who prefer to kick their keyboard up at an angle you also have two feet to flip out and they both have rubber on their ends as well to keep the Hero 84 from sliding around. 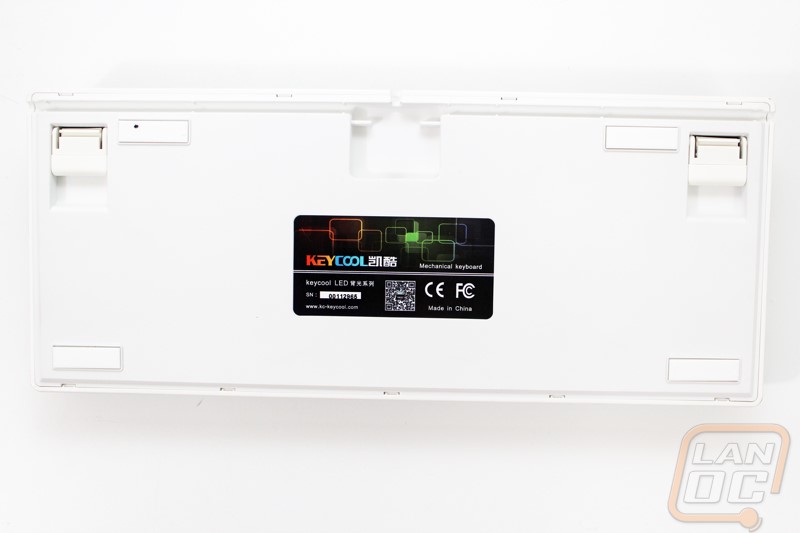 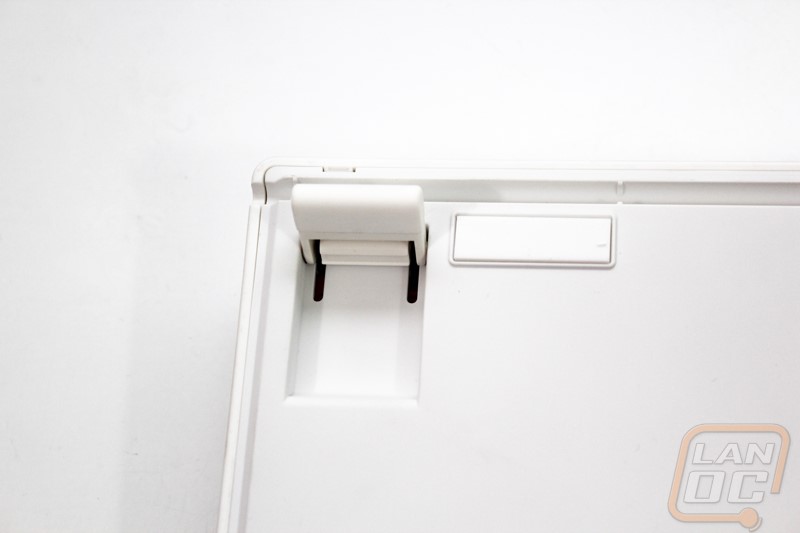 For the detachable USB cable Keycool did hid the plug on the bottom. The connection is a mini USB plug that will match your standard Micro USB cables. Unlike my other keyboards with a similar design I do love that they included a clear plastic lock that secures the cable in place for additional protection. For your cable you do have a track that lets you run the cable out of ether side or right out of the back of the keyboard I you prefer. 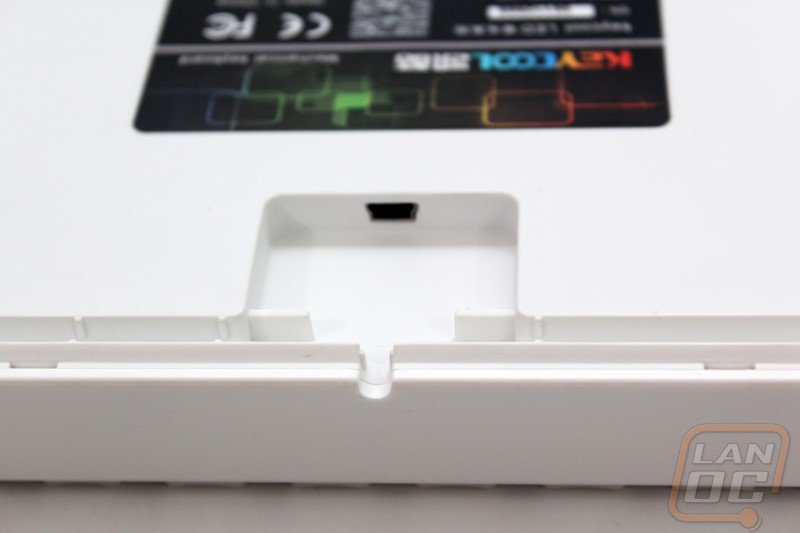 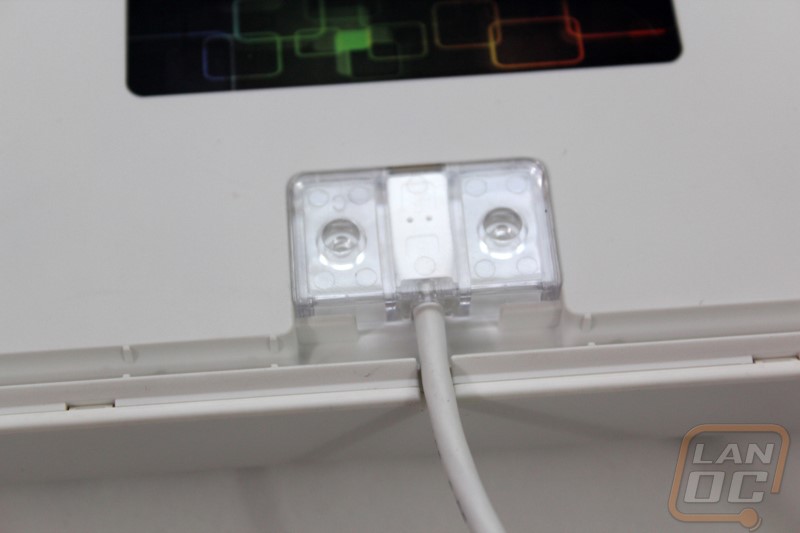 A trend that started a lot with gaming mechanical keyboards that has been trickling into some of the enthusiast boards is the use of Kailh keyswitches. The big factor driving this change is without a doubt the limited quantities of Cherry switches being made causing huge waits and driving the prices up. A lot of people aren’t fans of Kailh switches but my personal experience has been mostly good. I did experience a little extra wobble in some of them, especially their blues. Keycool went with them on most of the current Hero 84’s as well although you can still find a few with Cherry MX’s when ordering through Massdrop. Our sample has Kailh browns and for backlighting it has blue backlighting. For stabilizers you get Cherry style stabilizers that mean you don’t have to fight with any small metal clips when swapping out keycaps or cleaning your keyboard. 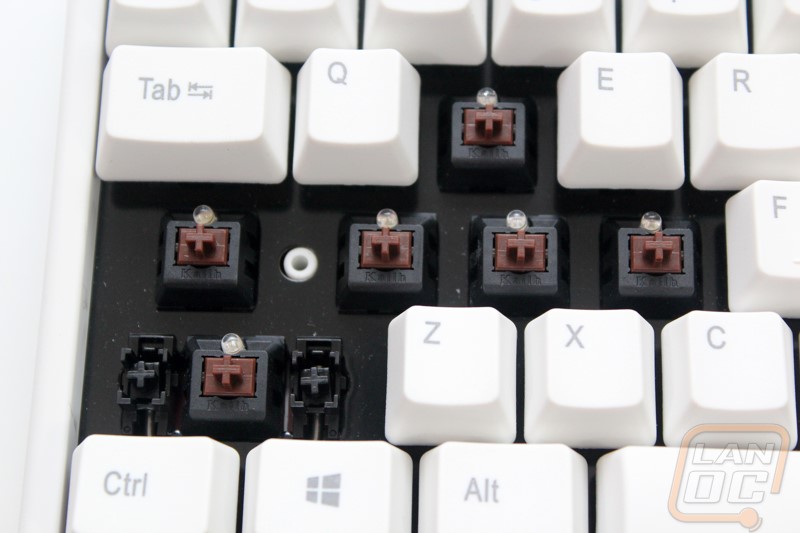 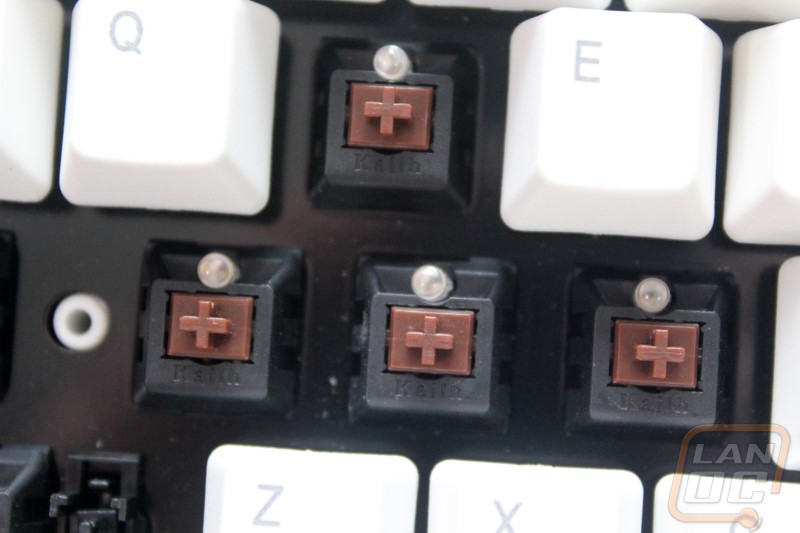 The keycaps on the Hero 84 are part of what make it special. You see most keyboards come with two different types of keycaps. Backlit keyboards have translucent white keycaps with a black paint on them and the legends are etched out of the paint. Keyboards without backlighting normally have basic ABS plastic with a stamp printed legend. The problem is both designs don’t exactly hold up over time. The paint wears through and you see backlighting and as a whole ABS keycaps wear and give a glossy finish and loose their legends on them a well. The Hero sticks with what enthusiasts are looking for. That is keycaps made out of PBT plastic that is a little harder and doesn’t wear like ABS (and costs more) and for the legends they went with a laser etching. The keycaps are white to match our white model. The downside to this design though is that the backlighting doesn’t light up the legends like a normal backlit keyboard. The keycaps themselves are slightly thicker than the OEM caps that we normally see but still aren’t close to the thickness that nice aftermarket caps are sometimes made. 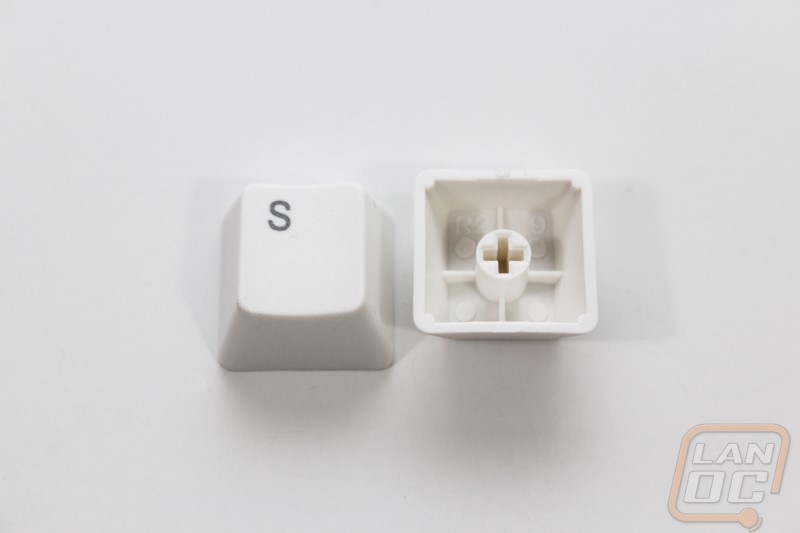 garfi3ld replied the topic: #36858 23 Jul 2015 19:38
Today I take a look at something a little different. A Keyboard with its size being similar to the 60% keyboards but with nearly all of the keys that you would find on a TKL. Enjoy!
Read More...

We have 1300 guests and one member online