With the keyboard moving to mechanical keyboards in mass over the past year there is still one company holding their ground. Logitech as of this posting has not introduced a mechanical keyboard into the gaming market. The reason they haven’t is because their gaming line holds its own, even with just minor changes over the years. The key to this is their built in screen with up to date game and PC information right on your keyboard. No one else on the market has been able to develop anything similar, largely due to Logitech’s integration with so many games on the market. We had a chance to look at their G19 a while back, but even still today their main keyboards are still very similar to the original G15. The G15 was replaced by the G510 and that is what we will be taking a look at today. 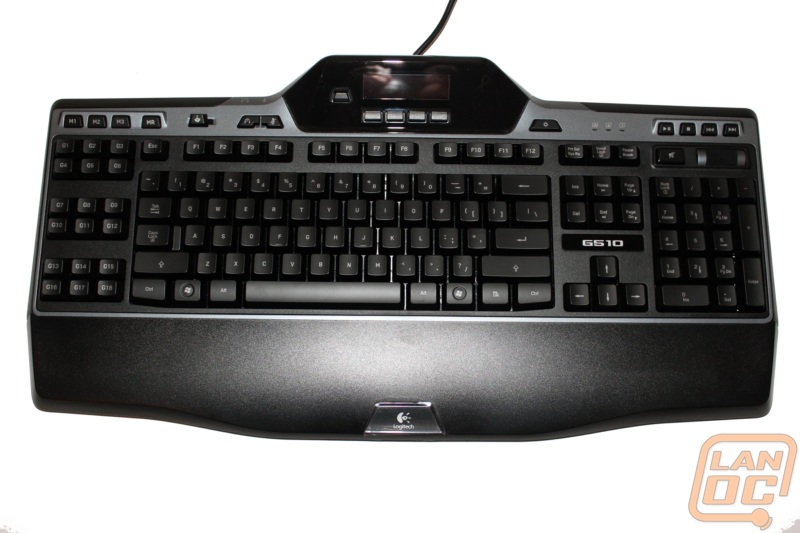 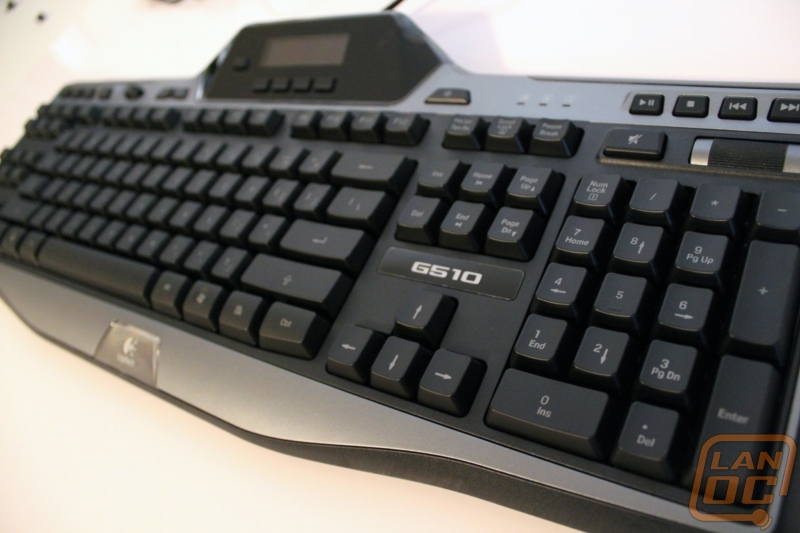 Other than the actual photo on the packaging the G510 is packaged in almost the same box that all of their gaming keyboard have been in. Around back you have another photo of the G510 in action along with a few close up photos of different features. Inside the box you are greeted by the keyboard as soon as you open it all up. To prevent any scratches the keyboard is bagged in a plastic bag and all of the glossy surfaces have a second plastic film placed on them. Under the keyboard you have all of the documentation secured in the cardboard along with the software on CD. The last thing you will find, tucked up under everything is the optional wrist rest. 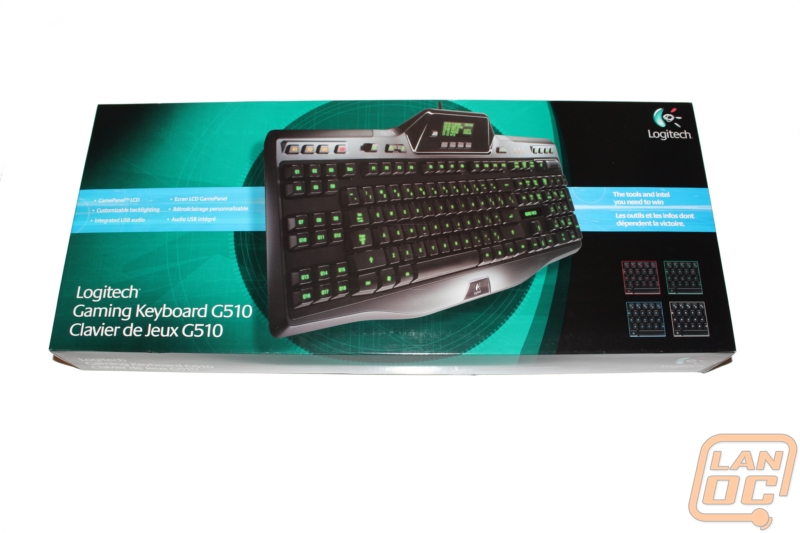 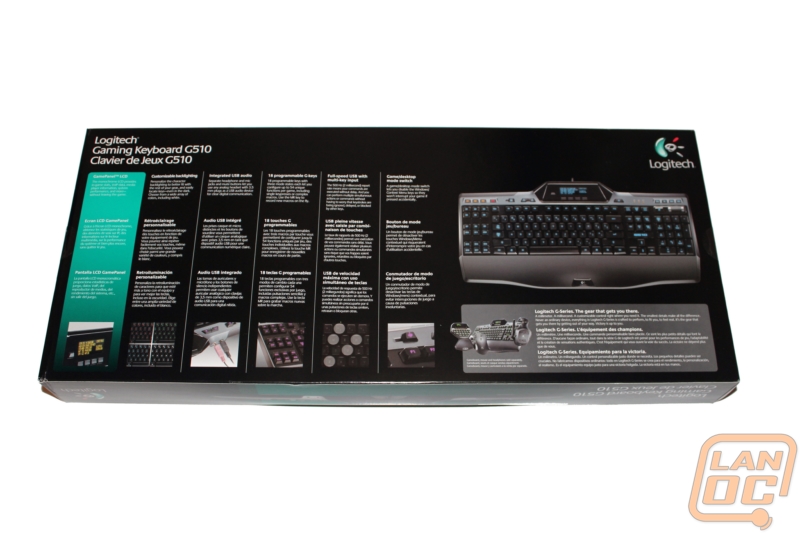 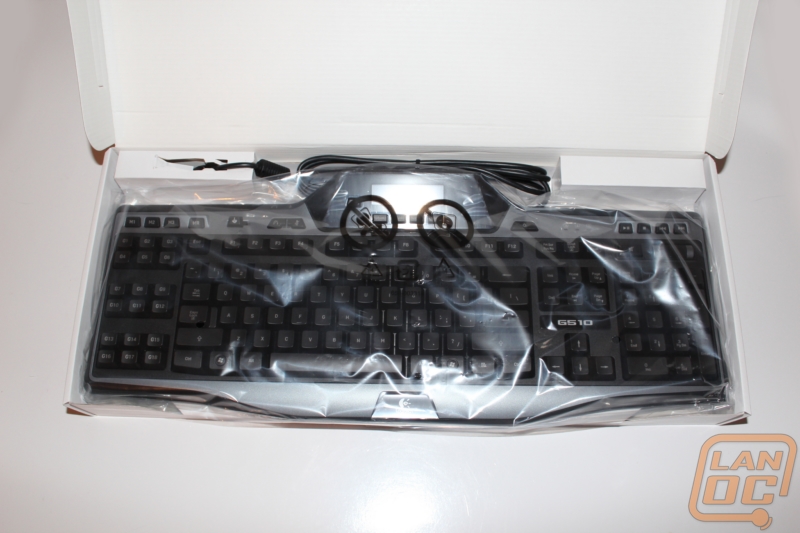 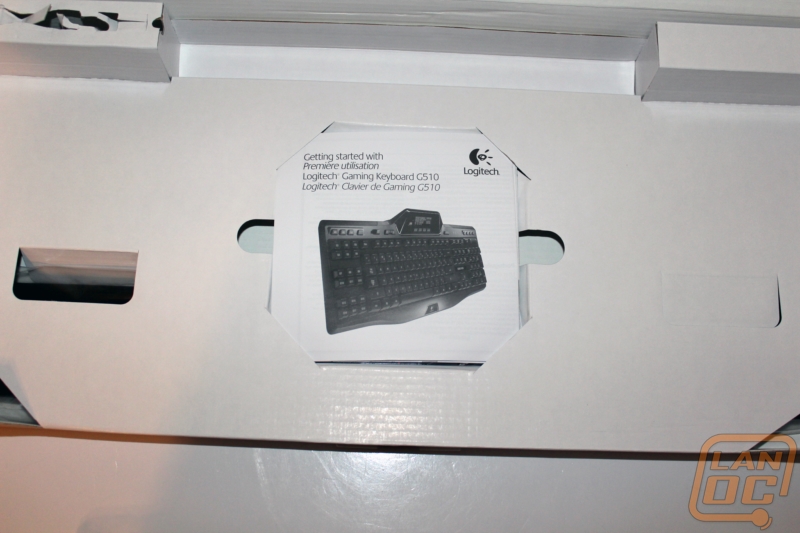 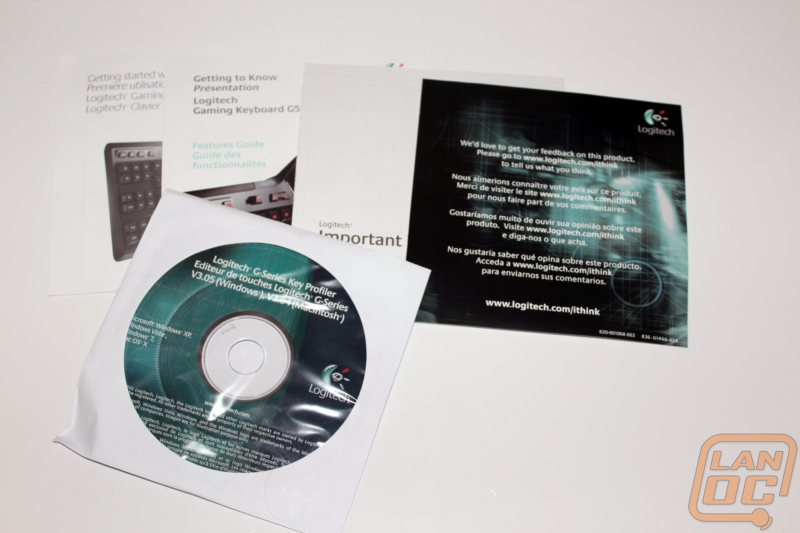 To go along with the heads up display of the G510 and to allow more customization of the macro keys Logitech has its “gaming Software”. Their software integrates what used to take multiple programs with the keyboard alone as well as works with all of Logitech’s gaming product line. That means you only need one program installed to make changes to your G510, G13, and Logitech mice. 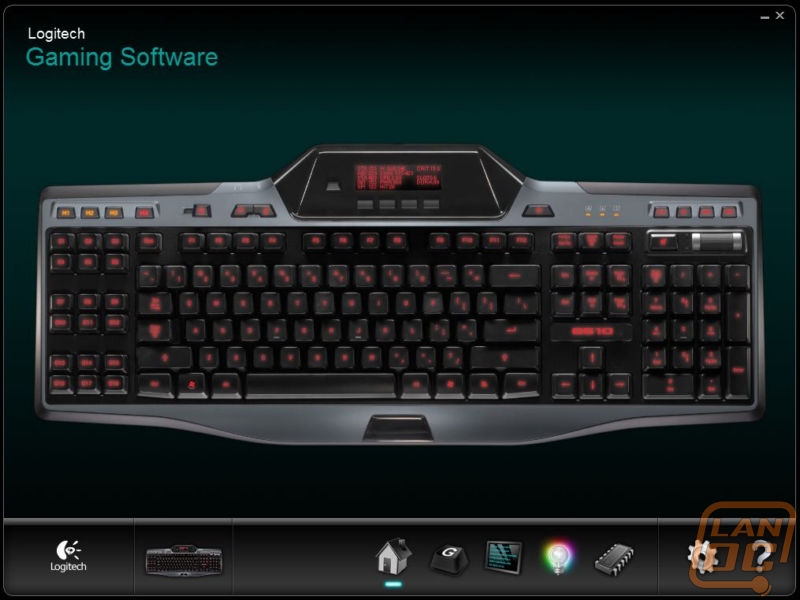 On top of being able to create your own profiles both in the software and on the fly, Logitech automatically scans for installed games and gives you the option to use profiles designed for each game also. Something I want to point out here that is different from our G13 and G19 coverage, the software finally works correctly with steam. Before it would only pick-up games that were installed by disk. If that was the case now it wouldn’t pick up much on my PC. 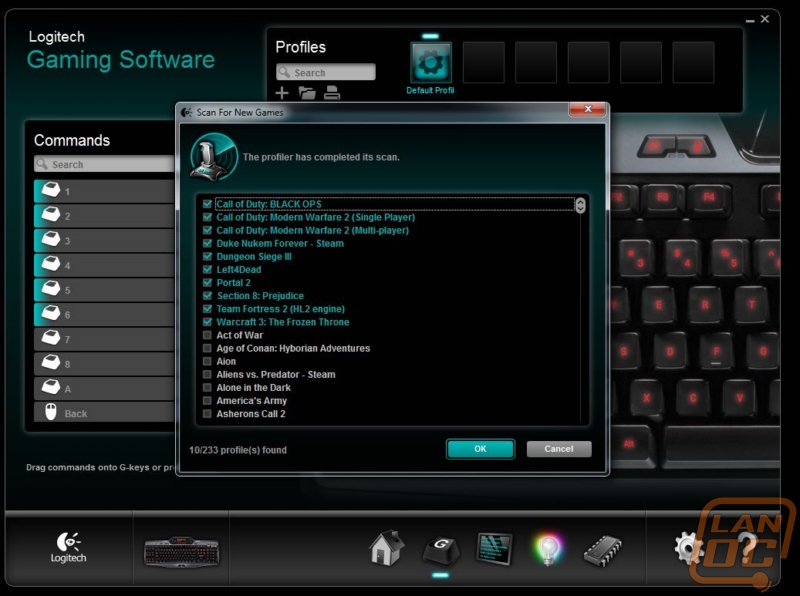 All of the HUD apps are controllable on one page. There are only a few that I find important, with Vent being at the top of that list. It’s nice that the software also takes into account what device you are programing and using a photo of the correct device in the software. It even picks up the difference between the original G15 and the orange v2 G15. 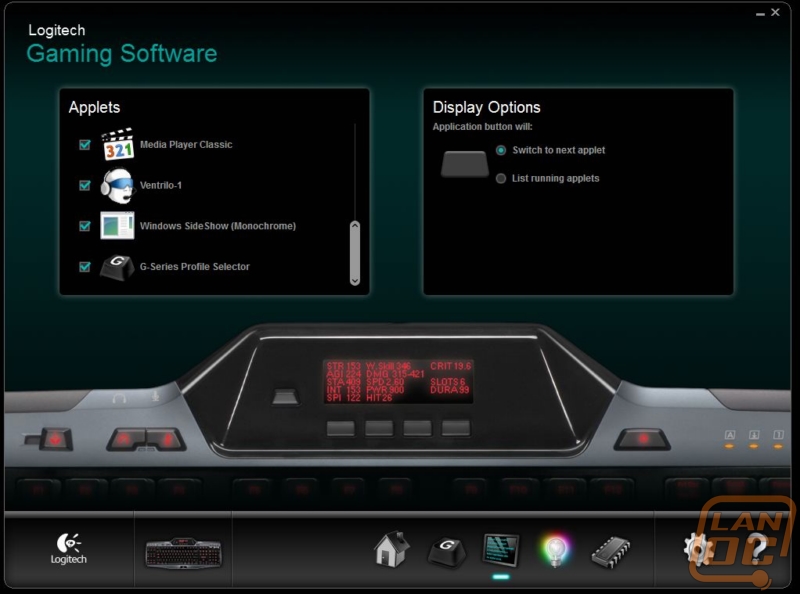 As with the G19 the G510 has the ability to be adjusted to just about any color. Ironically my first two picks were orange and blue. I realized that the original G15 colors were both good choices. Just to be different from the G15 I am currently running green. 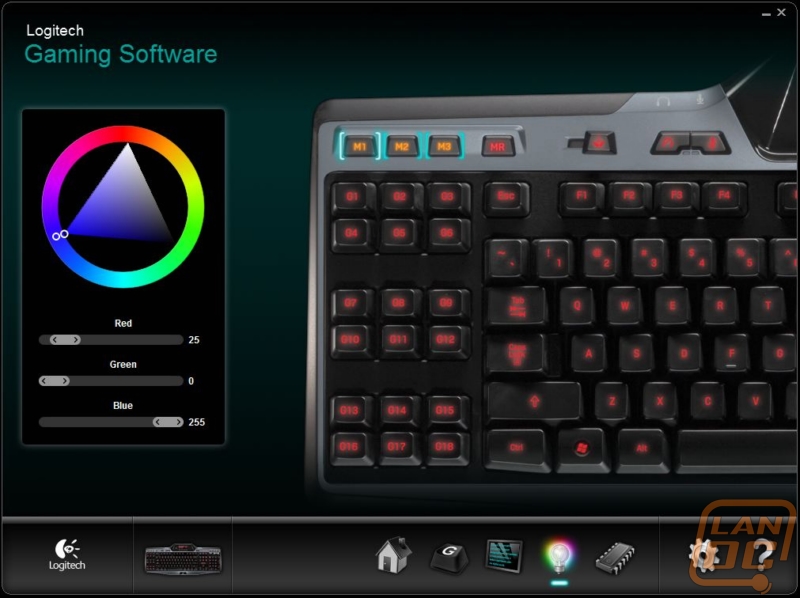 The G510 has onboard memory for you to be able to store your profiles to be able to use them on other PC’s. You will still have to run the “Logitech Gaming” software though. 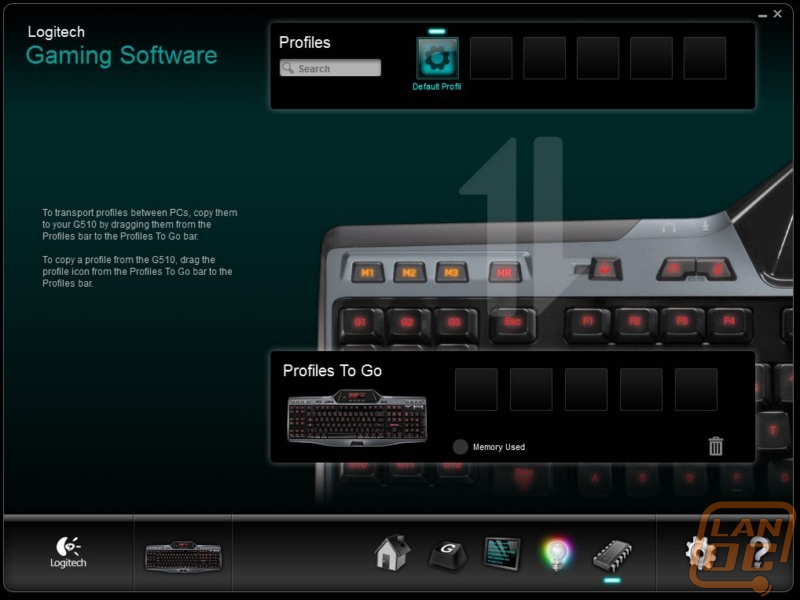 Going back to the G510 after a good amount of time using different mechanical keyboards was interesting to say the least. Jumping from the clicky clacky keyboards back to a silicon keyboard was an adjustment but I was back to typing away quickly in almost no time. Once adjusted jumping into game was easy, the G510 feels just like the old G15 and the G19. Truthfully it feels like they meshed all of the G series keyboards together to give you key features from each. From the G19 you have the multi-color backlighting and the media controls including the wonderful scroll wheel style volume control. From the original G15 you have the three wide macro keys, something that also brings along the original G15’s bulkiness due to its width. From the G15 v2 you have the fixed screen unlike the G19 and G15 v1’s adjustable (and closable on the G15v1) screens. 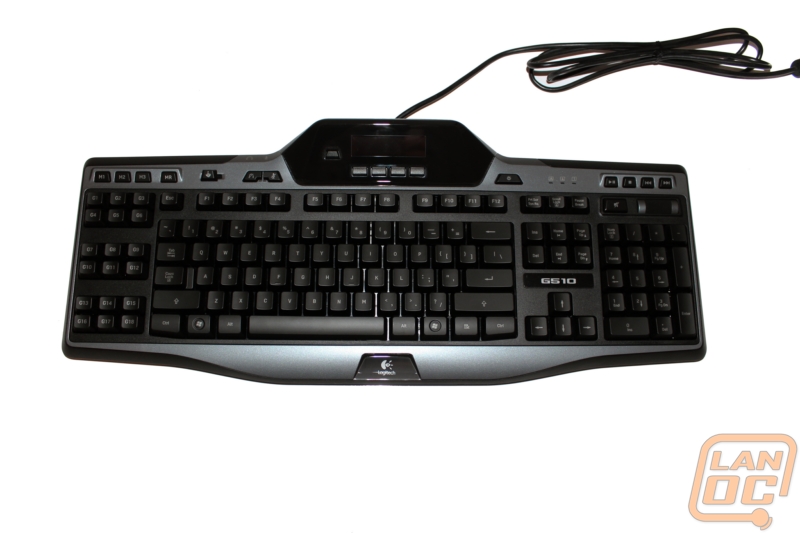 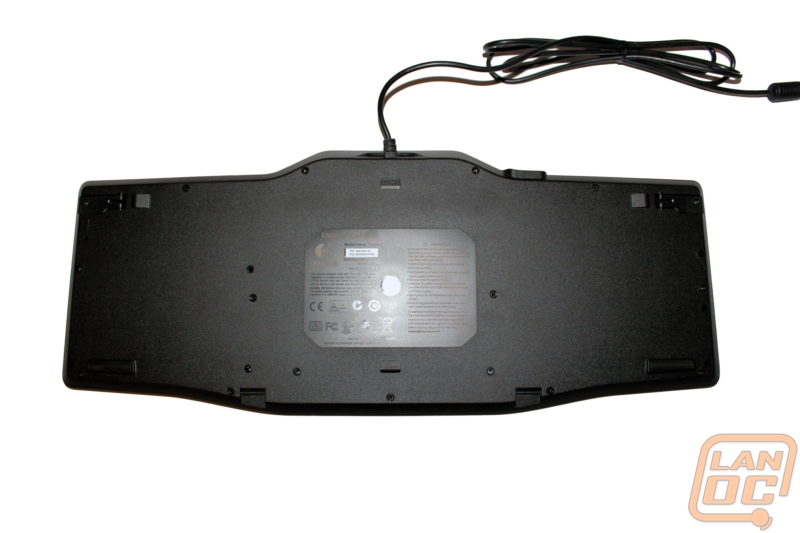 For the most part taking all of those features from previous G series boards was a good idea. The lack of the G19’s screen for example helps keep the price lower, if not cheap. And the media keys are wonderful. But who’s idea was it to bring back the three wide macro keys on the left wide. Not only do I know no one who uses them, but by going back to three wide from the two, they have managed to make the G510 extremely wide again. This isn’t very good when you have a limited about of space like at a LAN party. Going away from the macro keys and giving you the ability to program ALL of the keyboards keys would be a preferable choice in this situation. One of our staff Cory mirrored this opinion, and considering his love for the G13 its surprising that he doesn’t put the macro keys to use. 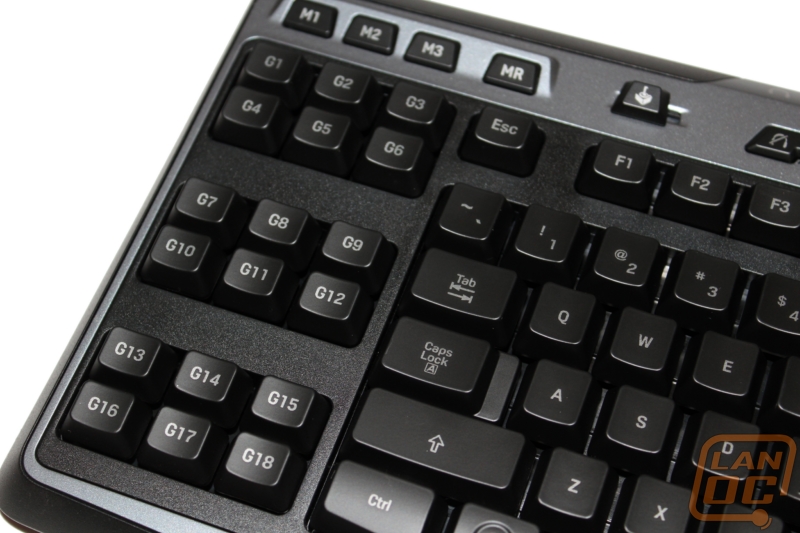 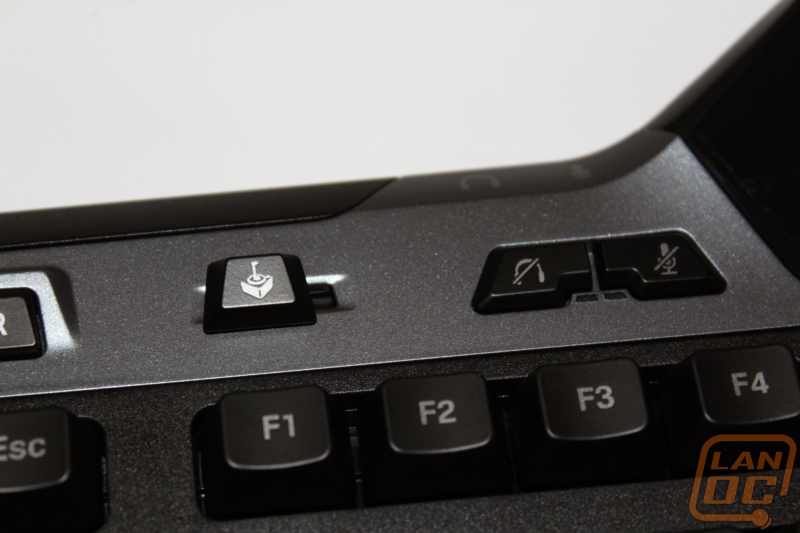 What I did like about the performance of the G510 was the ability to be able to program macro’s on the fly. I almost never need then, but if you do need them it’s much nicer to be able to do it on the fly without having to back out of game to do. 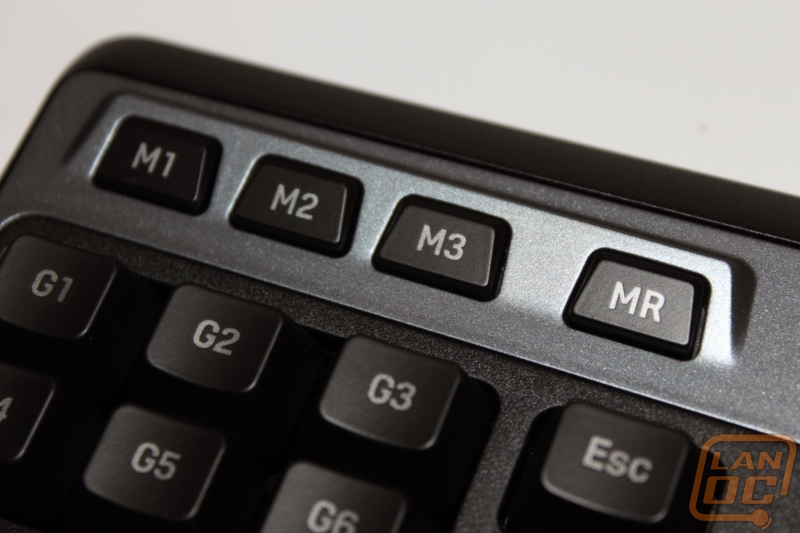 More than anything else, I found the built in screen useful in Vent. When I tried to use the screen with games that supported it I found it almost impossible to use. There isn’t much that the screen could show that wouldn’t be better just as an overlay in game. But when used in vent I was able to see who got online or offline as needed without having to tab out of game. I was even able to change rooms as needed and kick and ban when it was required. The screen’s use is limited but due to the amount of time I spend in Vent, I wouldn’t want a Logitech keyboard without the feature. 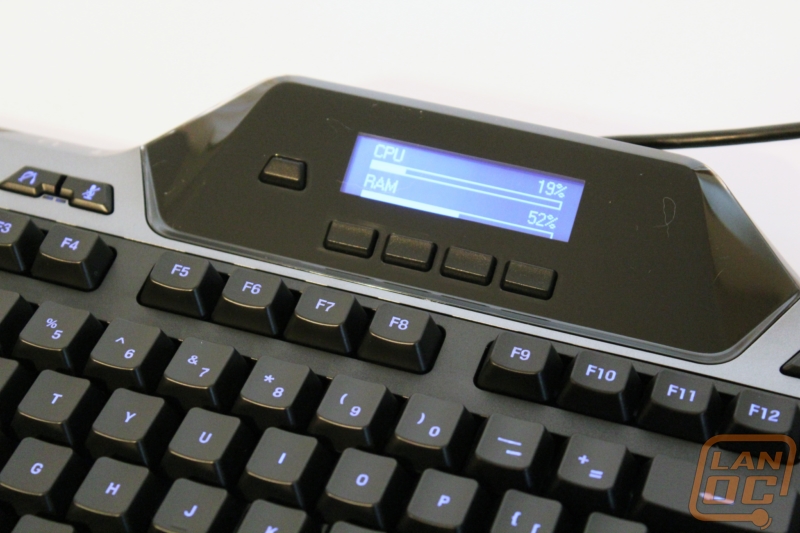 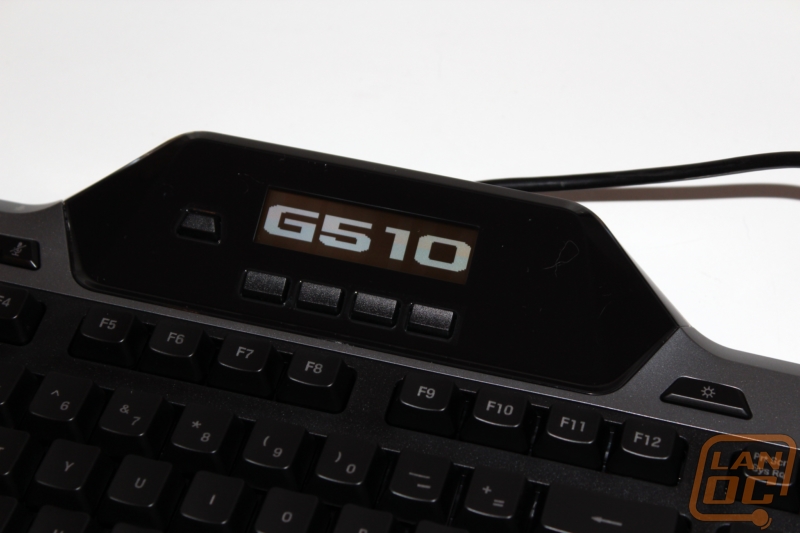 One feature that was added on the G510 that we haven’t seen in the past was the inclusion of headphone and microphone ports. Unlike keyboards from Razer and Steel Series who have similar ports, Logitech didn’t use pass through cables to include these. The G510 has a USB sound card built in to control these ports. For some this is a great feature, making hooking your headphones up with shorter cables easy. My only complaint about this inclusion was what they had to remove to add it. In the past they would include a two port USB hub, but due to the onboard sound they did not include a built in hub. I think having the hub and sound card together could keep your in office wiring simpler with just the one device to plug into your PC. 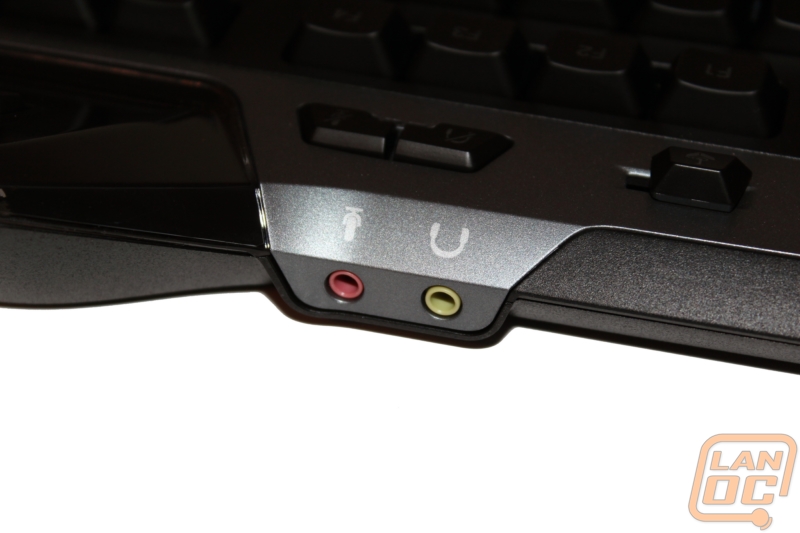 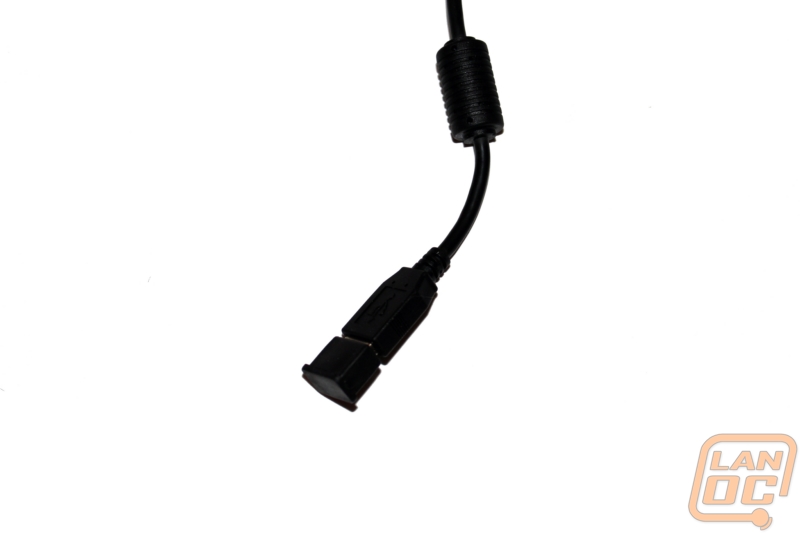 So how did the onboard perform? Well between listening to the song Sail by Awolnation and in game I was impressed with the audio performance. My only complaint came when hooking up my headset and unhooking. Every time you plug in or unplug from the G510 it will disconnection completely from USB and reinitialize. Depending on what you’re doing this could be a hassle. 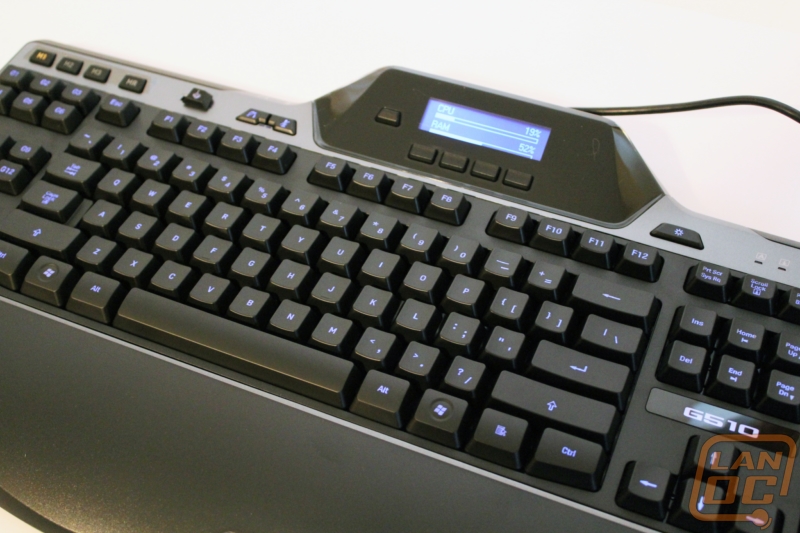 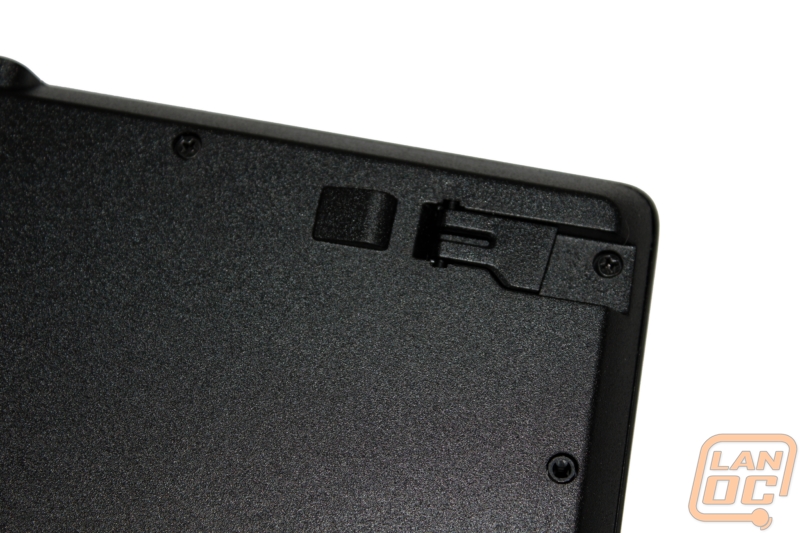 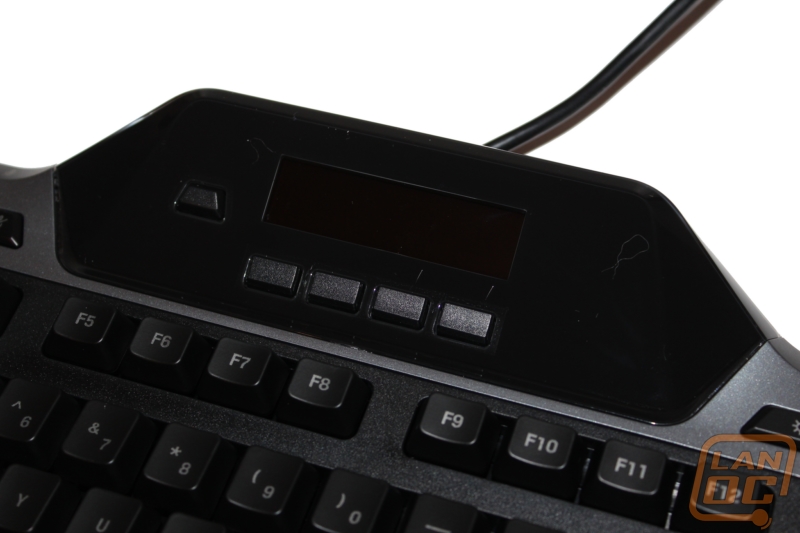 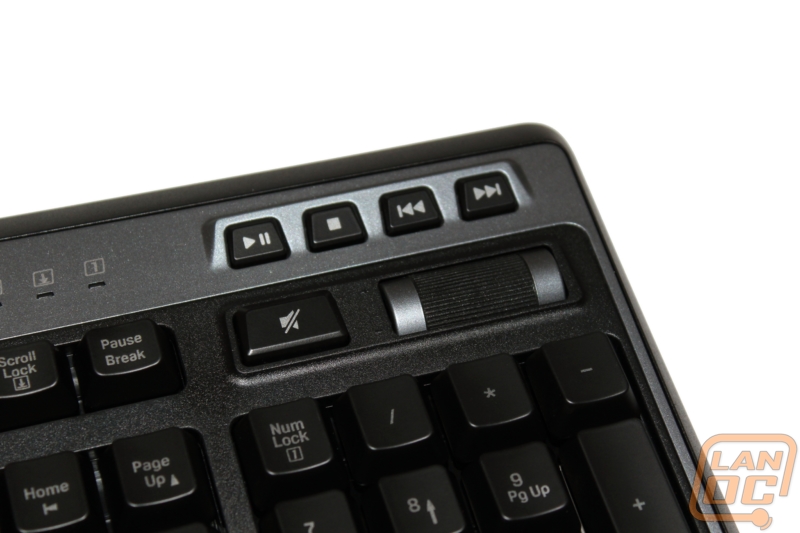 So at the end of the day is the G510 the keyboard for you? That really depends on if you want a mechanical keyboard. With that being the new trend I wouldn’t blame you for wanting to go that route. But if you want to go with a non-mechanical keyboard I really don’t think there is a better option on the market. Logitech has put a lot of time perfecting its G series of keyboards and other than a few small issues that I had it really is a quality product. A lot of people put the HUD screen down as a gimmick, and for the most part I would agree. But If you spend a lot of time in Vent the added cost of the screen will pay off. And for those of you with an old G15, this is as close as you can get to your original keyboard. You will also end up with a few new features to boot! 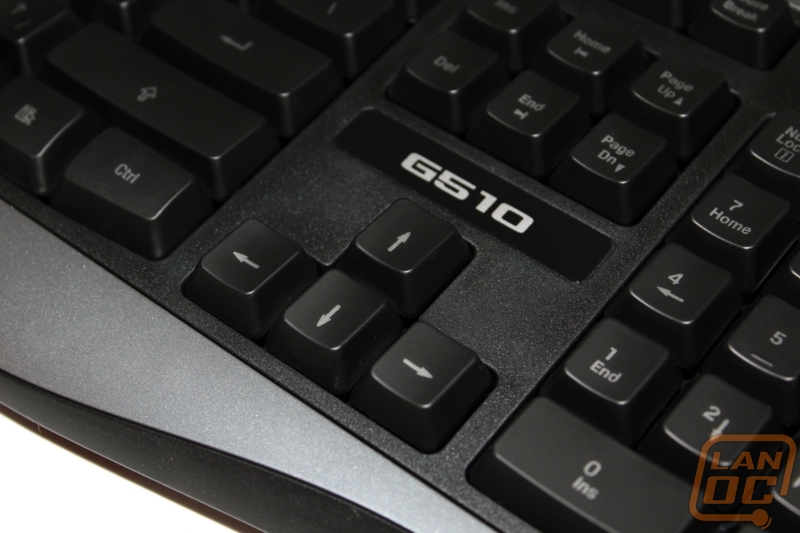 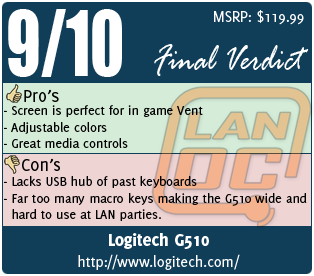 You might call him obsessed or just a hardcore geek. Wes's obsession with gaming hardware and gadgets isn't anything new, he could be found taking things apart even as a child. When not poking around in PC's he can be found playing League of Legends, Awesomenauts, or Civilization 5 or watching a wide variety of TV shows and Movies. A car guy at heart, the same things that draw him into tweaking cars apply when building good looking fast computers. If you are interested in writing for Wes here at LanOC you can reach out to him directly using our contact form.
Discuss this article
Log in to comment
Posts in discussion: Logitech Gaming Keyboard G510

We have 1775 guests and one member online