Earlier this week I looked at Microsoft's Sidewinder X5 Gaming Mouse, as it turns out they make more than just mice with the Sidewinder name. The Sidewinder X6 is the first gaming keyboard created from the ground up by Microsoft, there previous keyboard the Reclusa was a collaboration with our friends at Razer similar to what they did with the Habu mouse. Of course I'm always excided to take a look at new keyboards, I don't think I've ever found the perfect keyboard for me. With Microsoft's experience and quality, who knows this could be the one for me. 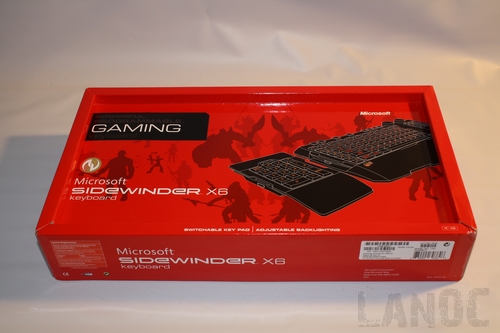 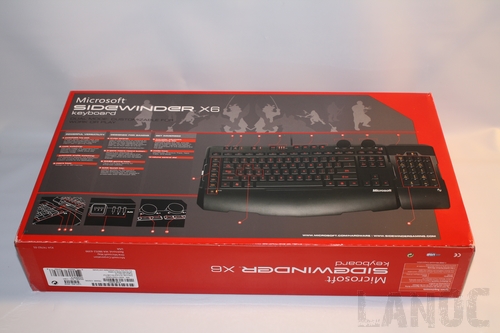 Two-color adjustable backlighting dial Keyboard keys are red, and key pad and Macro keys are amber in Game mode. Lighting dial adjusts the brightness of the keyboard and key pad.

Mode switching Manually toggle the keyboard from standard mode to either of two gaming modes. LEDs show the selected mode.

In-game macro record button Record any sequence of keystrokes-even standard chat messages. Macros are stored on your hard drive and can be easily shared. 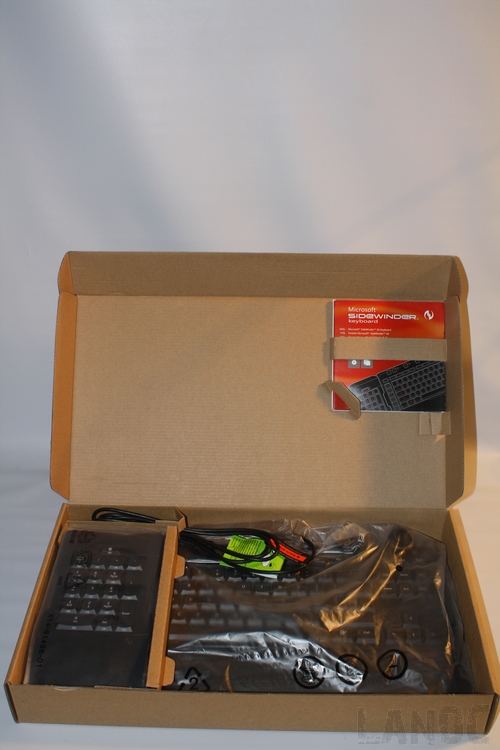 The X6 is packaged in something similar to what we saw with the X5. Of course being a keyboard the packaging is a little bigger. I was disappointed that you can't see/feel the keyboard with this design like you could with the X5. The front of the packaging does have a drawing of the keyboard with many game characters in the background, keeping with the look on other Microsoft Gaming hardware. On the back there is a picture of the keyboard with each of the special features circled along with descriptions of each. Inside you may be surprised to see the num pad separate from the keyboard (unless of course you pay attention to the features on the back of the box :-P). You will also find the driver disc included along with a manual, and product guide. 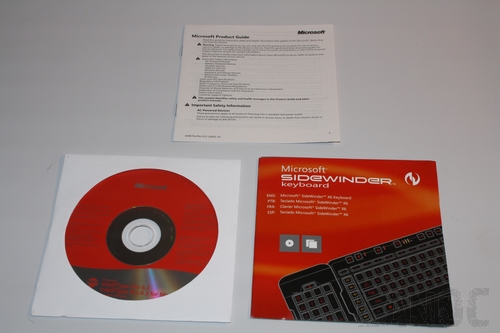 Just like the X5 the installation went smoothly, its as simple as running the disc then plugging the keyboard in. 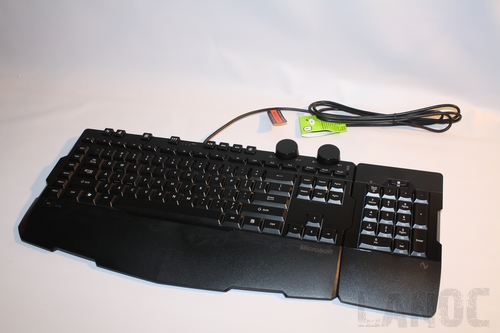 Just like the X5, the X6's software is integrated tightly within windows. You can find all of the needed settings under Keyboard Properties from control panel. I was disappointed that there wasn't a diagram showing what key you are programming like with the X5 and even with the Razer Lycosa. From the software (and on the keyboard itself) you can enable the macro pad, which is the num pad. When enabled this gives you access to 18 more programmable keys. Of course, if those 30 programmable keys are not enough there are a few more ways to gain more. The keyboard is setup to take advantage of three "banks" or sets of macro's, this was a good way to change macro's for different situations or characters in game. Similar again, to what we saw with the X5, the X6 has the ability to run different custom key settings for each game or program that you run. 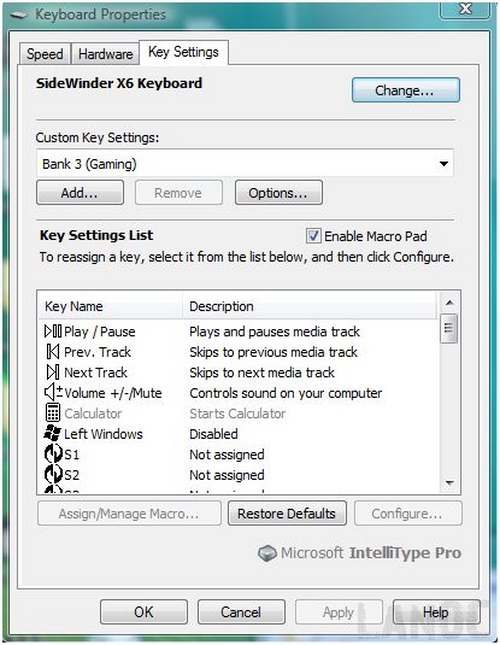 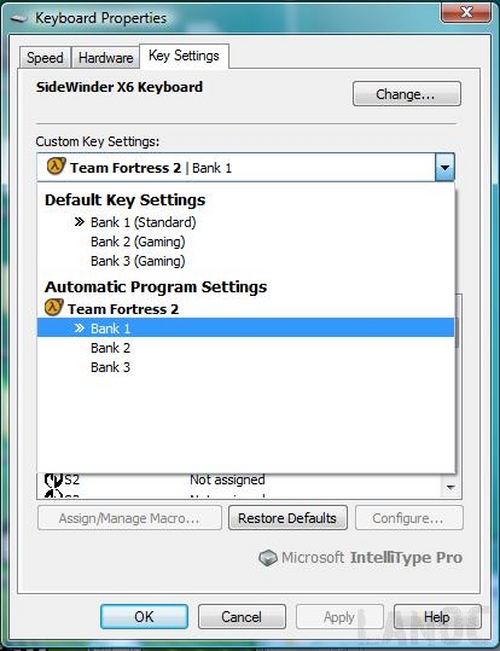 Living with the Sidewinder X6 for a few weeks I was able to get accustom to its ups and downs. I noticed right away that the keyboard had no option to tilt, it took some adjustment to get used to the close to flat position.  The keys themselves have the feel and throw similar to the G15 from Logitech, but the keys aren't as tall giving it more of a laptop look. The red and amber(amber is behind all of the macro keys) backlighting gives the keyboard an amazing style but most importantly makes it easy to see the keys in the dark. If you think it's too bright there is a knob to control the brightness. Next to the brightness knob there are a few media keys up top to make your life a little easier (play/pause, back, forward, mute), along with my favorite feature the volume knob. When using the volume control a small volume meter pops up in the bottom right corner, this meter should be the standard volume meter for windows it blends in so well. Another useful feature is on the number pad, they included a calculator button for people like me who can't do simple math and are too lazy to find it through the start menu, lol.

Jumping into some gaming, I was able to put the macro keys to the test. The six buttons just to the left of the wasd layout are packed tightly together to make them easy to reach in game. I found the top two were still too far away to be usable. If you noticed earlier, Microsoft pushes the "30" macro keys in their feature list, but if you count them it's really 24, they get the 6 extra keys with a 1|2 switch at the bottom of the board turning the original s1-s6 to s7-s12. As far as I'm concerned the X6 has 24, switches like that won't be usable during game play. However, 24 Macro keys should be enough for most, and to make the Nun Pad keys easier to use they gave the ability to put it on the left side of the keyboard if needed. 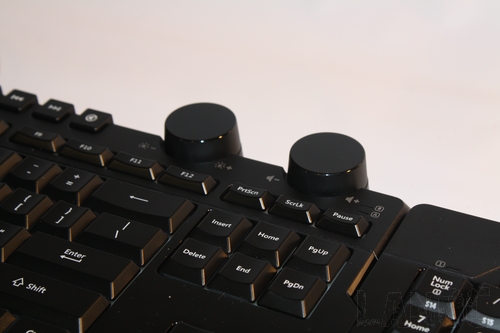 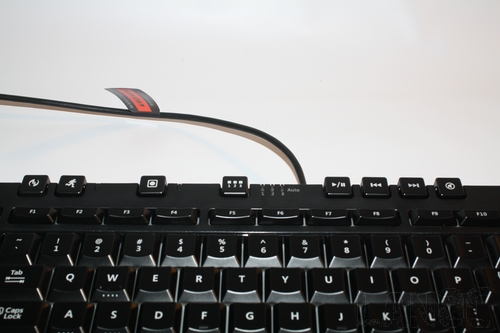 There are a few other buttons on the keyboard that I haven't covered so far. The first one at the top left has the same shape on it that we saw on the X5's palm rest. This button opens up a game listing, for me the only game on the list that I would want to play is Crysis. If I was able to add games to this listing this would be perfect for jumping into a game quickly, but without the games I play the most its mostly useless to me. Next to the game button there is a button with a running guy on it, this button is an auto pilot. You press the button then whatever key you would like to continue going, it will continue to hit that key until you press it again. I found this useful to set it to reload automatically for me in game, although I'm sure other people could find even better uses for it. There is also a on the fly macro program button, this is really important considering the software. The Lastly, you will find the macro mode button that switches between the three sets of macro's, along side of the button are lights to indicate what mode you are in. I would put this to use but I have no need for more than 6 macro's let alone 72 (90 if you count the 1|2 switch). 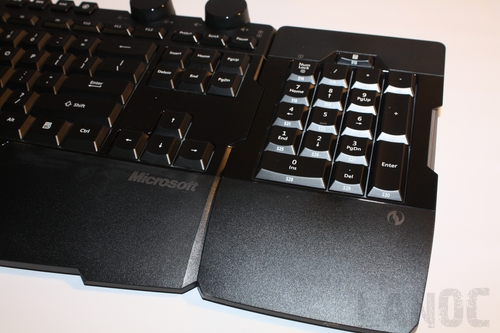 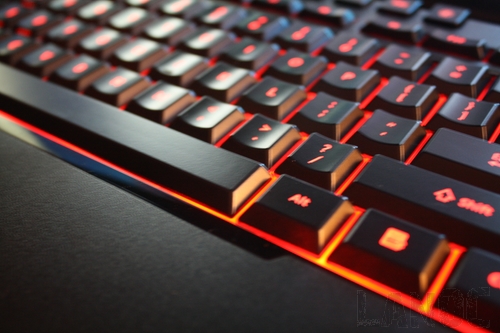 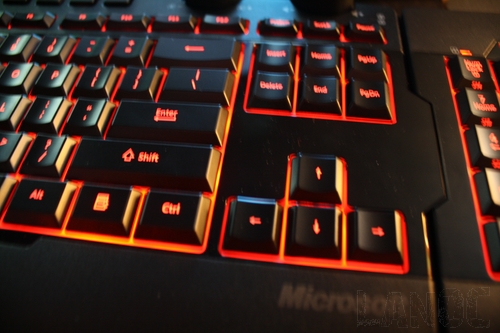 So after a few weeks living with the Sidewinder X6 keyboard I can say with confidence that it is a good keyboard. Of course its not without its faults, I was disappointed there is no ability to tilt the keyboard. I also found the software to be lacking some of the features that a gaming keyboard should have in its software. The amazing backlighting did help make up for these faults  along with the volume knob. I can't live without media and volume controls, but having a knob over buttons makes turning the volume up and down feel natural (why did Logitech drop this on the gen2 G15?). Overall the X6 is a good keyboard, on par with keyboard from both Logitech and Razer. 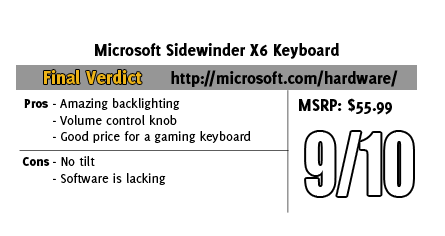 You might call him obsessed or just a hardcore geek. Wes's obsession with gaming hardware and gadgets isn't anything new, he could be found taking things apart even as a child. When not poking around in PC's he can be found playing League of Legends, Awesomenauts, or Civilization 5 or watching a wide variety of TV shows and Movies. A car guy at heart, the same things that draw him into tweaking cars apply when building good looking fast computers. If you are interested in writing for Wes here at LanOC you can reach out to him directly using our contact form.
Discuss this article
Log in to comment
Posts in discussion: Microsoft Sidewinder X6 Keyboard

We have 740 guests and one member online