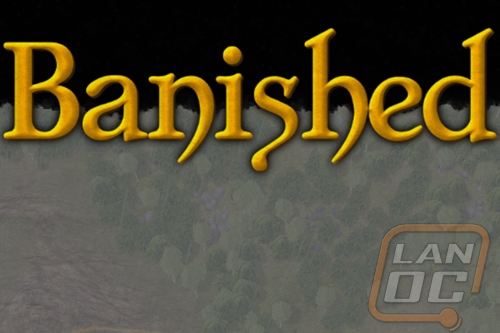 Those of you who have played games like SimCity, Anno 2070, and the Tropico series should be right at home with Banished gameplay, but even so expect to give things a go a few times before you really get the hang of things. To get a feel for the game they have provided four tutorials for you to run through, this will help you with the controls, how to assign workers to jobs, what buildings you should use, how to product food, and how to trade. Like a typical male, I didn’t need any instructions, so my first time in I didn’t run through the tutorials. Truth be told, I didn’t even see them. It must have been my excitement to jump into a game. 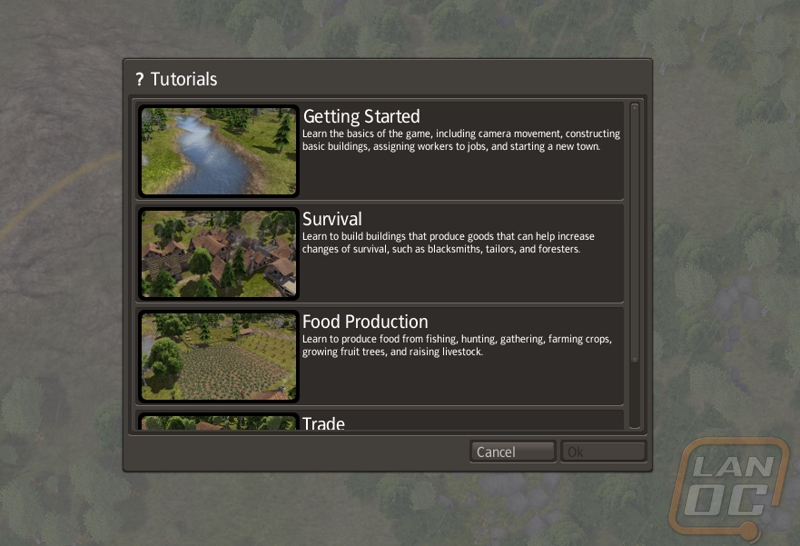 When getting started you have a few difficulty settings available to you in the configuration page.  First you want to name your city and along with that you will be given a random map seed. This random number will dictate the map that you use, so you can actually share map seed numbers with others to get a good location or to see who can perform better in the same conditions. You can select the terrain type (valleys or mountains) and select a map size as well. You also have options for turning disasters on or off, setting the map climate, and your starting conditions (aka what kind of supplies you start with). On all of my games, I went with the following. 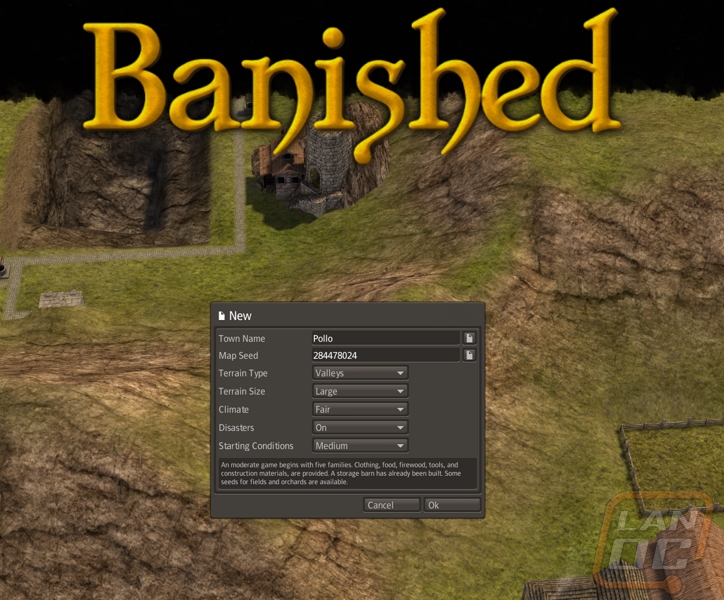 You start with a barn filled with a few of the supplies you will need to get started as well as a small group of people. Unlike many city builder games, Banished doesn’t have any progression or requirements you will need to meet before you can build a building. You are only limited by the resources and time required to build the buildings. It is entirely up to you on what to build, where to build it, and even if you would like to use roads at all. Part of what sets the game apart to me is unlike the games I mentioned earlier you aren’t building your city to reach the largest city size or to put the most money in your off shore bank account, in Banished you really are fighting for your lives. Your citizens aren’t going to leave and go to the next city, if you don’t do things correctly you will see them starve or freeze. 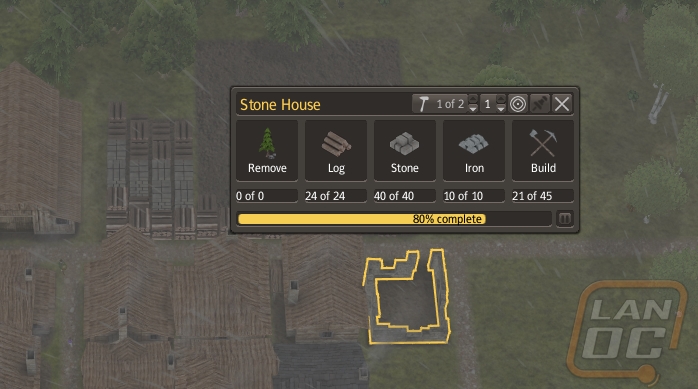 Banished is actually very similar to a Roguelike game due to its randomization, high sensitivity to mistakes, and permanent death. Even on the easiest of game settings, you will most likely run into an issue at some point that will completely kill off your entire population. A few people in the LanOC TeamSpeak and on my Twitch stream had the chance to watch and listen as my first city caught fire and the fire spread through my houses to my storage barns are marketplaces. Even though I had some supplies left, I watched as each of my settlers died from starvation and freezing to death because they couldn’t get to the supplies left in my trading post. All of my workers attempted to rebuild but died while trying. In another attempt I ran a little low on food and a few of my Foresters died, this had a cascading effect as the people who had food died from being cold because their weren’t enough logs to turn into firewood. In my third attempt, I had a similar snowball happen but I managed to stop it with just two people left. From those two people I proudly rebuilt my incest settlement back to a strong village only to run into a bug when I accidentally told them to gather rocks from the other side of a river. I watched painfully as each of my settlers made the walk ALL the way around the map while I tried repeatedly to use the Cancel Removal tool. Because they were gone for so long, they didn’t get their jobs done as well. So we once again ran out of food and firewood.

As unforgiving the game can be, this is also what makes it so rewarding when you do figure things out and do manage to grow. Balancing your growth to prevent damaging spikes of supply usage is important and more and more difficult as you get later into a game and start to have to deal with deaths from old age and other (sometimes comical) deaths. Unlike SimCity, Banished has a more realistic population system. When you build a house two of the kids or young adults from around your settlement will move in. As the head of the household they will have a few kids and fill up their house. Those kids will require food and supplies, but until they are old enough you can’t give them a job to do. As you can imagine, if you build a bunch of houses you might feel like you are good on food but soon you have a lot of mouths to feed and you won’t have any way to increase production for 10 years (or more if you have schools). Although the overall game seems really simple when compared to other games with countless building types, it requires a lot of careful planning to balance out your settlements production to keep everyone happy. 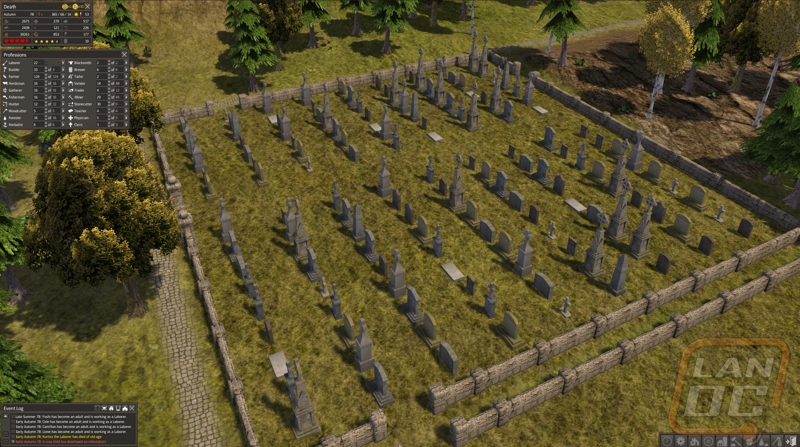 To throw a wrench into everything you also have to worry about disasters like the fire mentioned previously, tornadoes, various diseases and parasites that can bring your happy settlement to a halt. 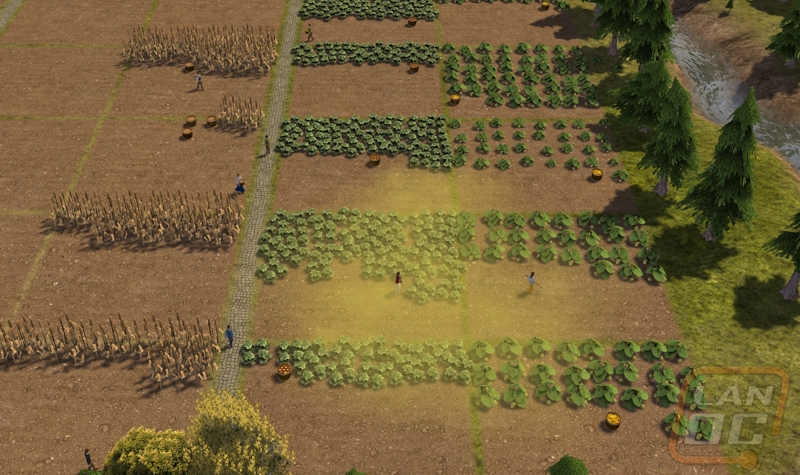