Visiting the Verizon 5G House at the Indy500 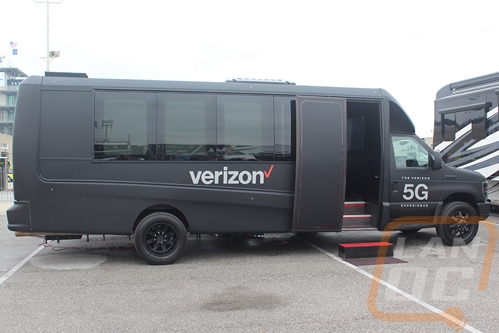 So last week Adam and I took a break from the office and made the trip over to Indianapolis as Verizon invited us to check out their 5G Home of the Future that they had set up just outside of Indianapolis Speedway during the week of the Indy500. The original plan was a short visit to check out the home but we ended up also getting invited over to the track to also take a quick look at their 5G setup over there as well along with a peek inside of their mobile 5G truck. The main headlines were the low latency and the extremely high speeds but they had a few demos setup that I’m going to quickly run through today.

Title: Visiting the Verizon 5G House at the Indy500

So 5G is still a few years out for household use and longer than that on the mobile side of things, but the 5G Home of the Future was setup in the neighborhood next to the speedway where Verizon is doing one of their 11 test areas. When we came in they had the entire house decked out in the latest and greatest in today's tech to show how in the future the speeds and latency of 5G will be able to be taken advantage of. So the first thing was when we came in they had a Ring doorbell, something that I personally have been looking at getting. The idea here was just to give an example of how now and in the future, the bandwidth will help you be able to communicate with people at your door from anywhere in the world, just like you would if you were there in person.

Just inside the doorway, they had the router/modem setup along with a Cisco switch. They had an Ericsson rep on hand and he actually did most of our tour. Verizon, Emerson, and Intel all worked together on the modem. As you can see below it is larger than current modems with its built-in antenna but I’m told that heat is the major factor in size currently. It should also be noted that they didn’t try to put the modem near a window or outside to increase its capabilities. It was on the far side of the house away from the tower. 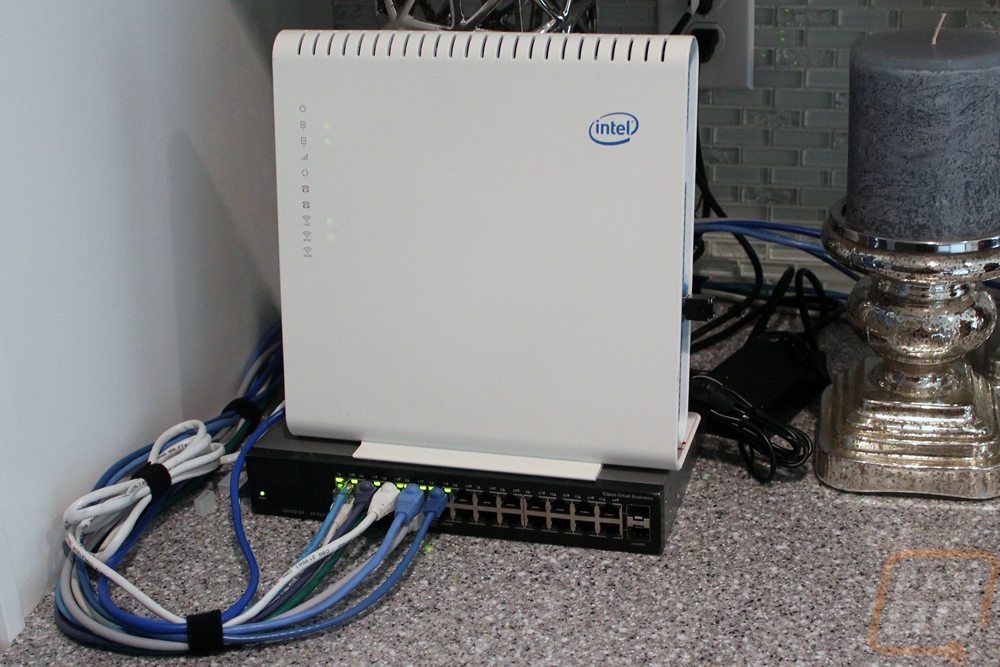 So in the first room, they had a screen showing information on the houses current connection but all I could look at was that download speed. The house was connected at just under 1.7 Gbps. They had the upload speed at a MUCH lower rate but I was told that could be changed depending on the plan.

In that same room, they had a TV on loop showing a video they put together. Basically, a few days before they setup four 5G antennas around the speedway and put an antenna on top of a Camauro and took it around the track. The goal here was to show that it would handle handoffs from tower to tower. At the same time, they were seeing download speeds of 5 Gbps while going around the track. They were downloading 4k video but let's be honest, at those speeds that is not even touching the total bandwidth. 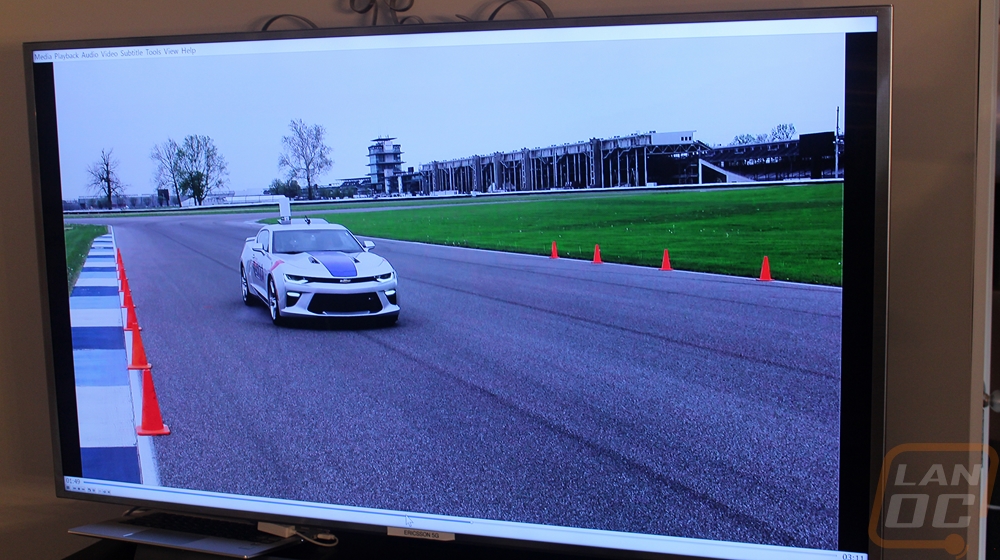 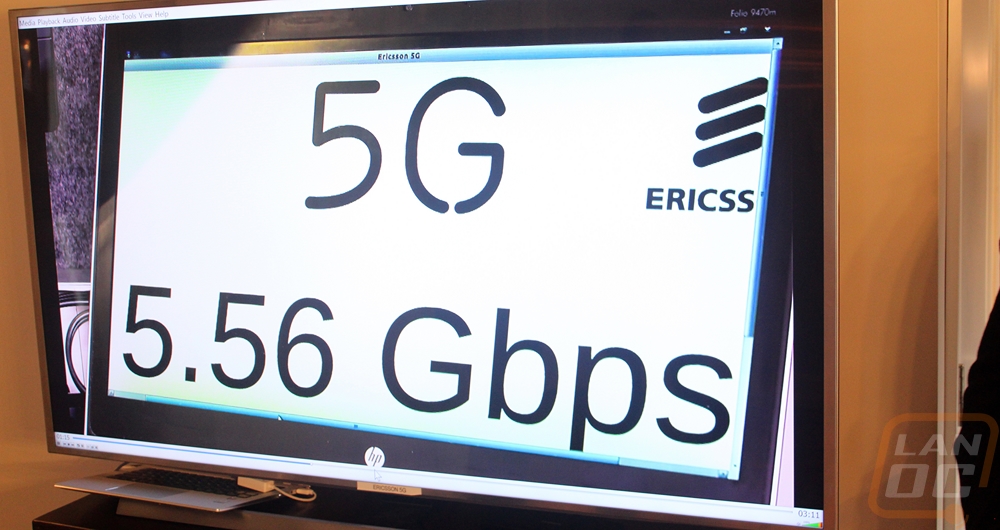 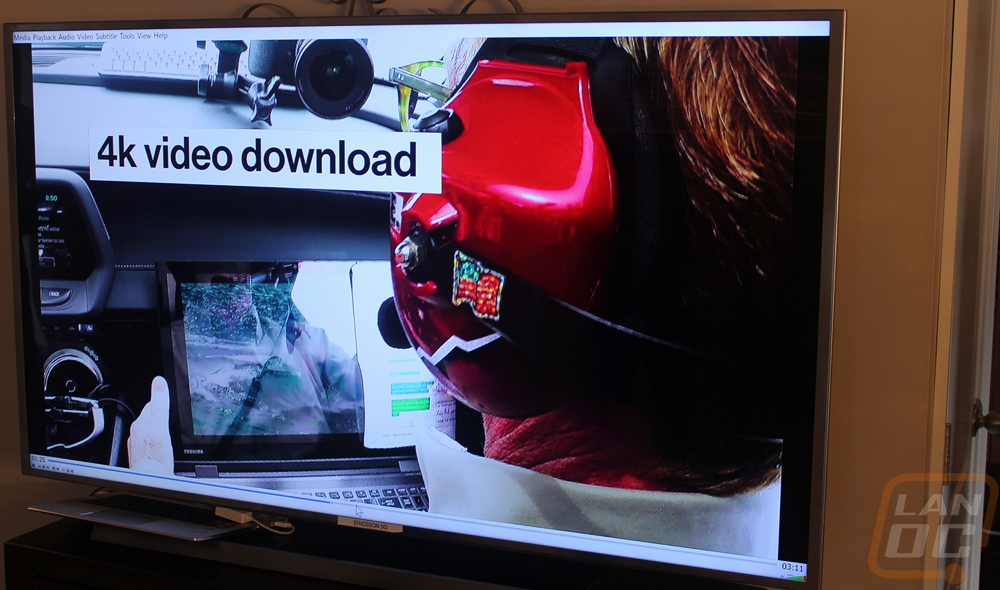 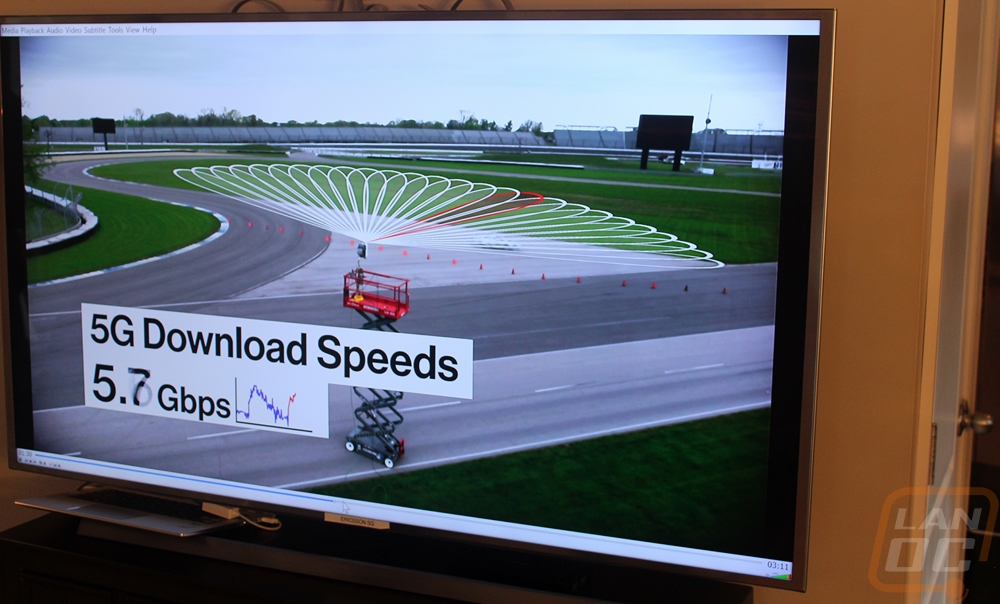 They also did a latency example where they covered the windows on the card and used a camera on top of the car broadcasting out, then downloading that footage back into glasses to drive the car around the track. They only went 20-30 MPH but still an interesting example of the lower latency that 5G offers. 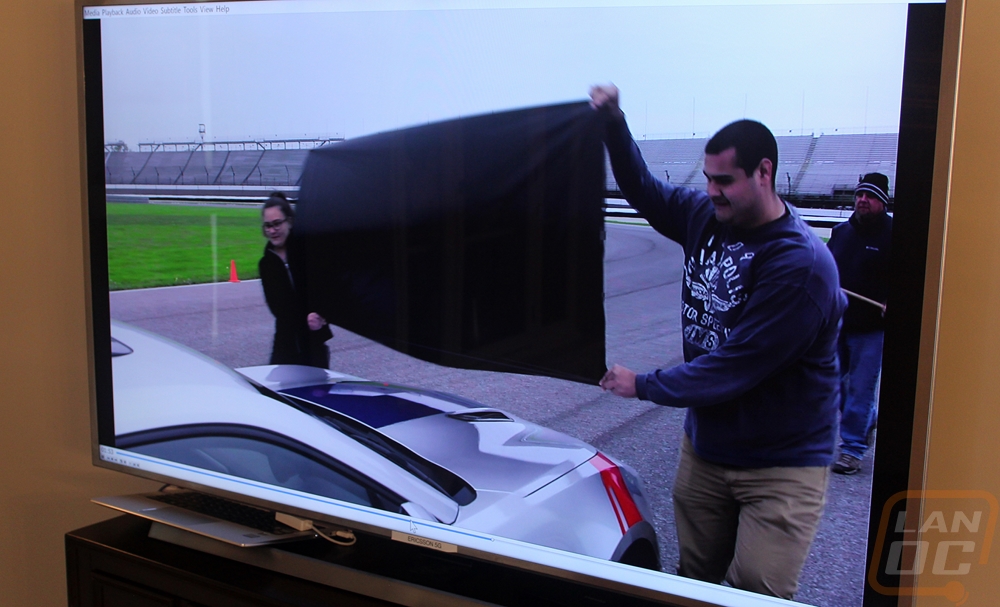 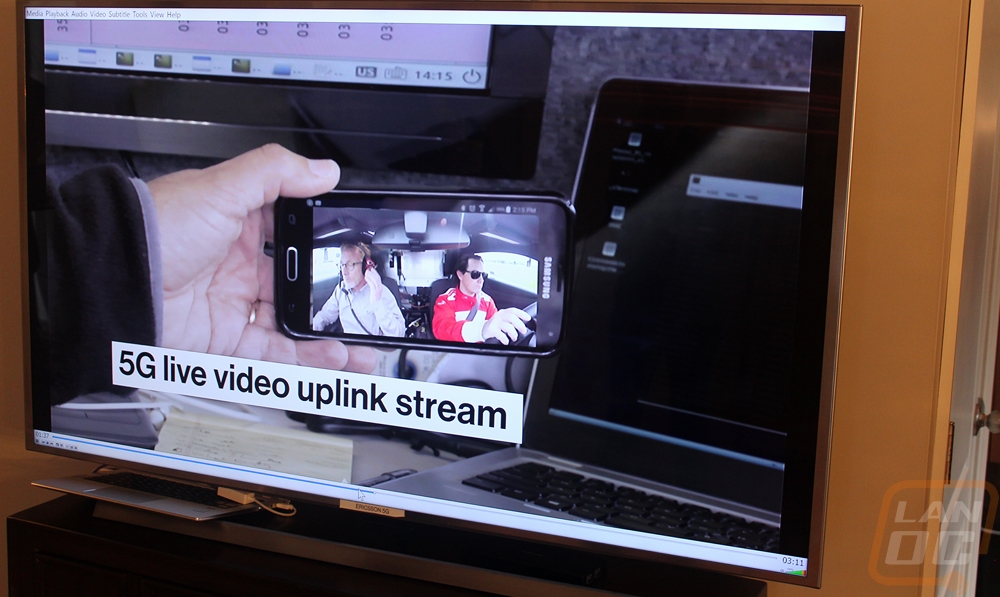 They had Skype streaming setup because video conferencing and communicating with family via video is only going to grow in the future, especially if bandwidth and latency drops with 5G allowing higher resolutions.

There were a few VR demos setup but sadly the most exciting demo they had was down. I was able to watch a 360 video filmed at the track on another day. Prior to the rain that happened on the day of our visit they were actually live streaming that same 360 camera back to the house. So getting to see the video was really cool but live would have been even cooler. The idea here is with VR growing and 360-degree cameras starting to come out more bandwidth is going to be needed to handle this going into the future. 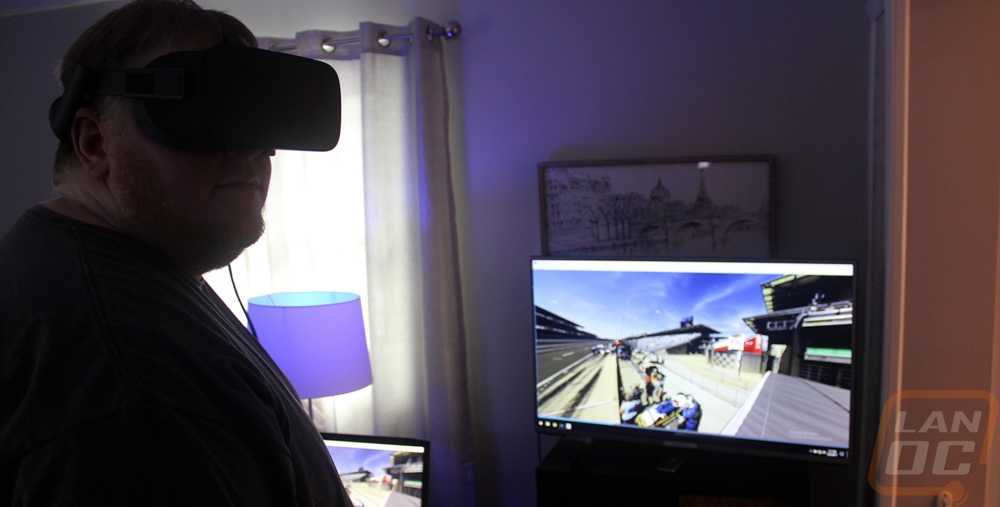 The last demo in the house was a 4k television that was actually downscaling 8k footage, something that just isn’t possible to stream at today's speeds. More importantly for satellite and cable 8k and even 4k is a very long way out so people will be turning to their internet to be able to download or stream those ultra-high resolutions as they start to come out. 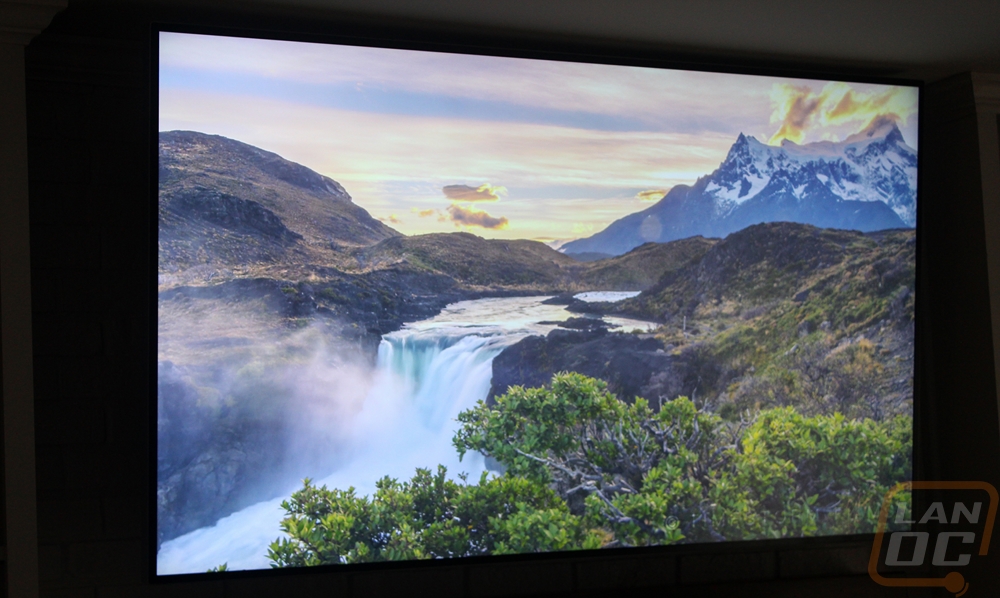 They also took us down to the end of the road where they had the 5G tower mounted to a light pole. You can see the 4G LTE antenna up on top then the 5G in the box a few feet down. I was told that later models will actually be about a third of this size. 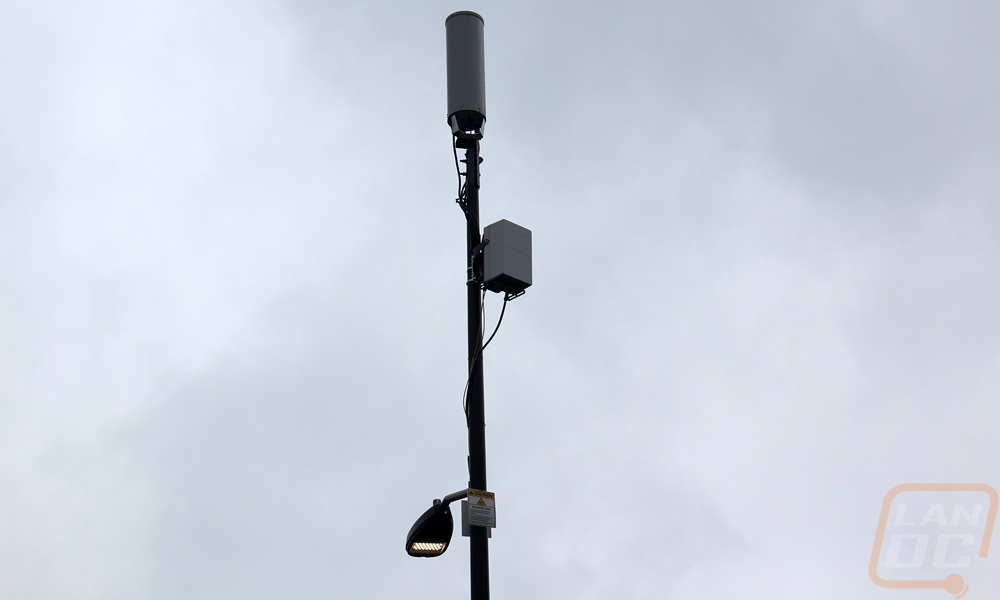 So like I said before, after the planned tour they offered to take us over to the track. Here is a look at the Ericsson truck that was setup. We also got a look inside but didn’t get any photos inside. 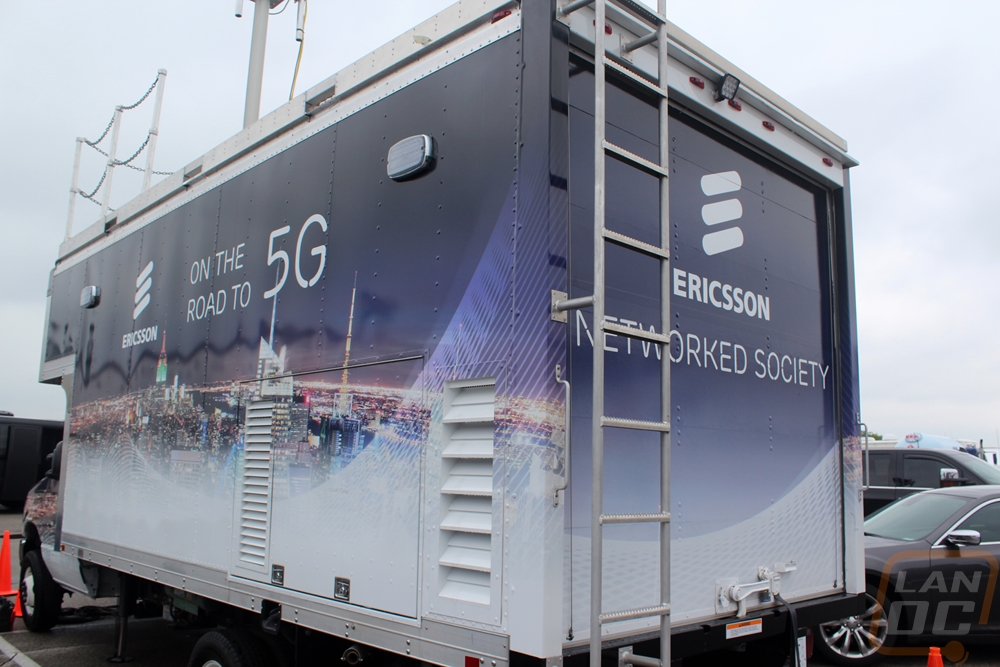 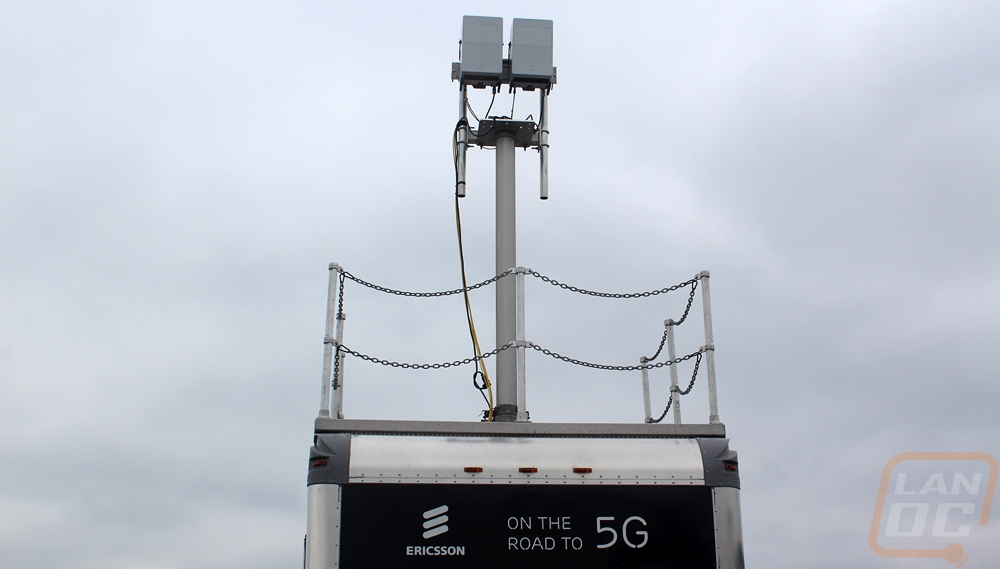 Not far from the tower truck Verizon has their 5G Experience truck setup. The all blacked out looks good though my wife did make a joke when looking at the photos about how it could also double for a creepy van with someone giving out candy. The truck was connected to two antennas and I was told that up to 4 is capable right now. Being so close helped as well but look at those transfer speeds! 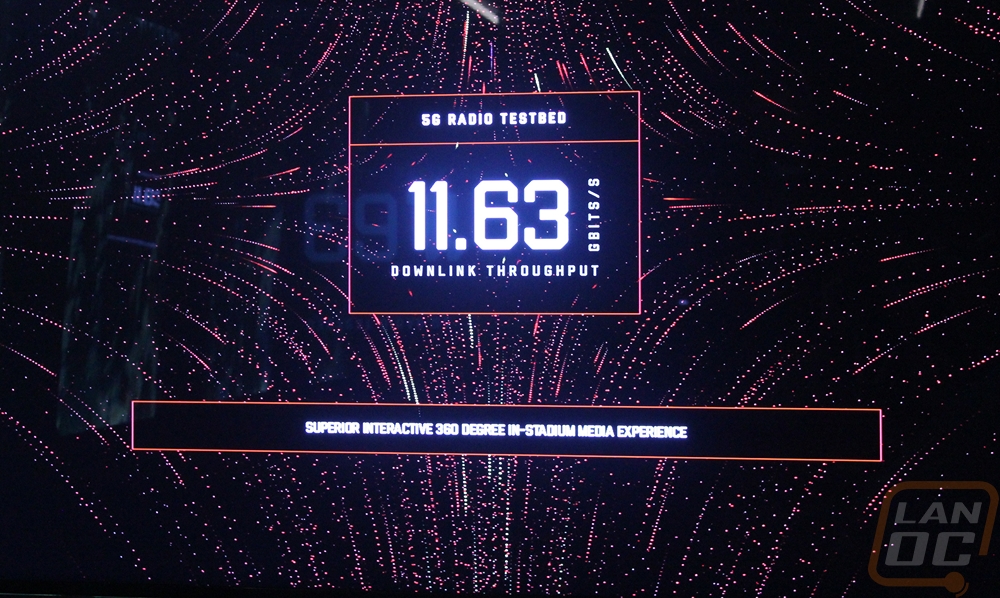 Inside the van was more demonstrations of the potential for 5G network speeds in the future. They had VR goggles for each set setup but I was most interested in the side windows. You could look through them but they were also full screens. They showed cool demos where you could be driving and getting local facts or information on the screens and each was also a touchscreen as well. That tech wasn’t 5G specific but it was very cool. The goal though was to show that with even more bandwidth displays like this could be possible and interesting in cars in the future when mobile 5G is available. 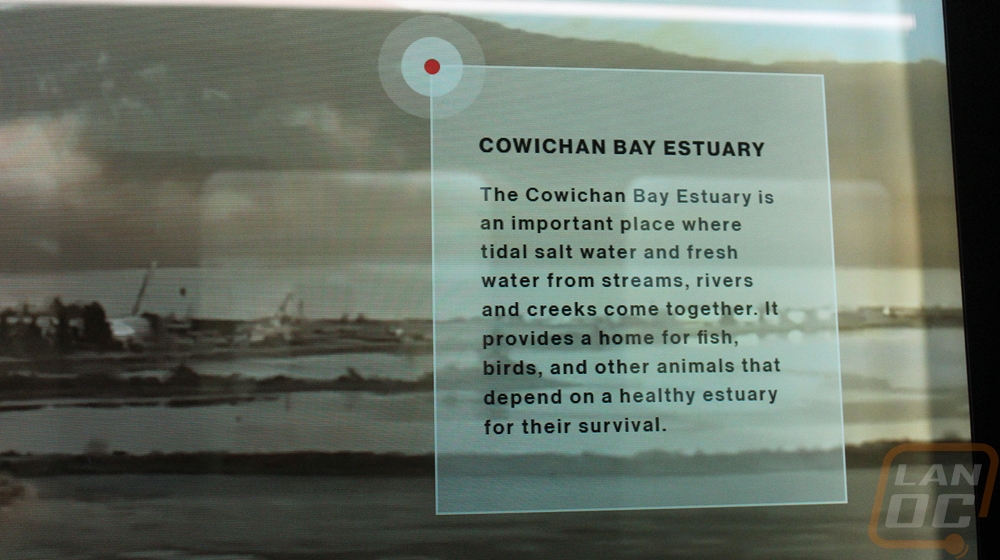 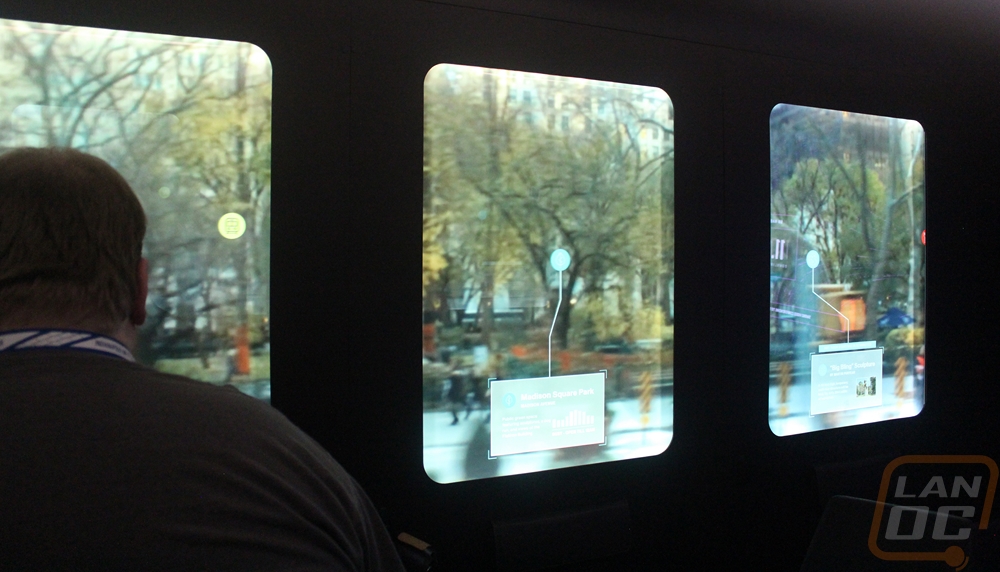 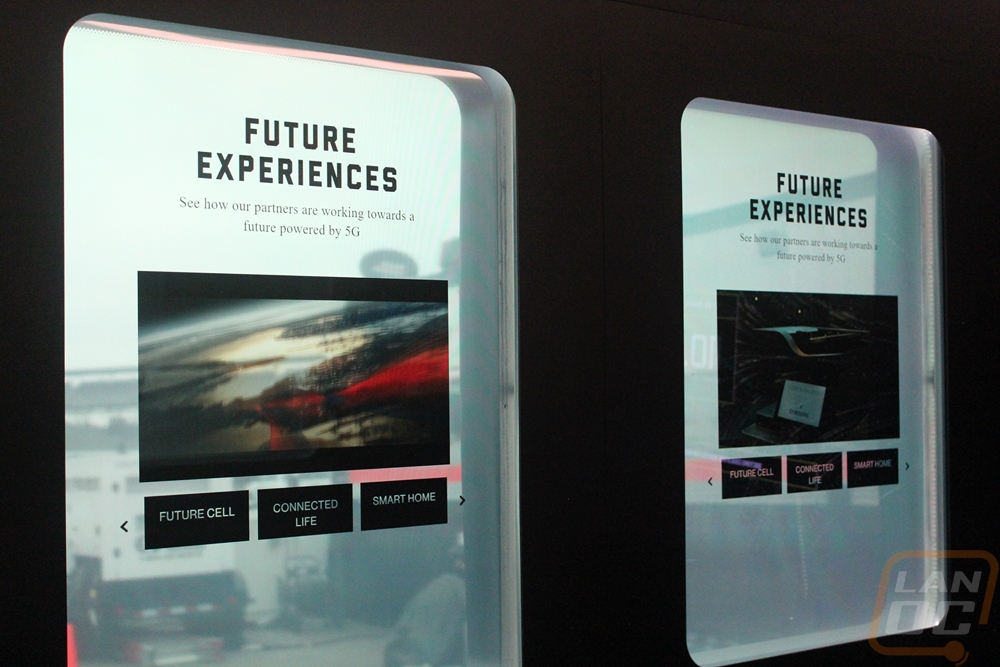 You might call him obsessed or just a hardcore geek. Wes's obsession with gaming hardware and gadgets isn't anything new, he could be found taking things apart even as a child. When not poking around in PC's he can be found playing League of Legends, Awesomenauts, or Civilization 5 or watching a wide variety of TV shows and Movies. A car guy at heart, the same things that draw him into tweaking cars apply when building good looking fast computers. If you are interested in writing for Wes here at LanOC you can reach out to him directly using our contact form.
Discuss this article
Log in to comment
Posts in discussion: Visiting the Verizon 5G House at the Indy500

We have 1433 guests and no members online