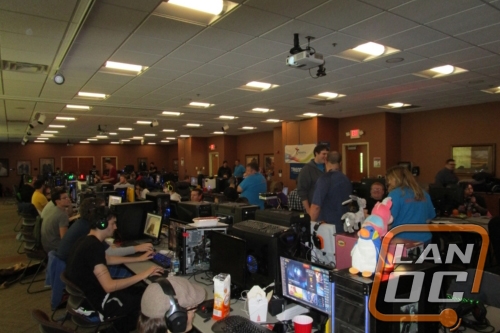 A few days after returning from FortLAN VII I hung my badge along with the collection of those from other parties. Being one of the largest badges makes it stands out, but what really caught my eye was the contrast of the name tag from their first event. We made the short trip to Fort Wayne back at the beginning of 2013 for the maiden FortLAN event. I still remembered climbing the spiral staircase to the second floor of the Andorfer Commons at Indiana Tech on our first visit and staring over the balcony to the cafeteria below. The venue was comfortably familiar but with several subtle improvements and a few notable changes. Once we had our equipment unpacked, we eagerly jumped in game. 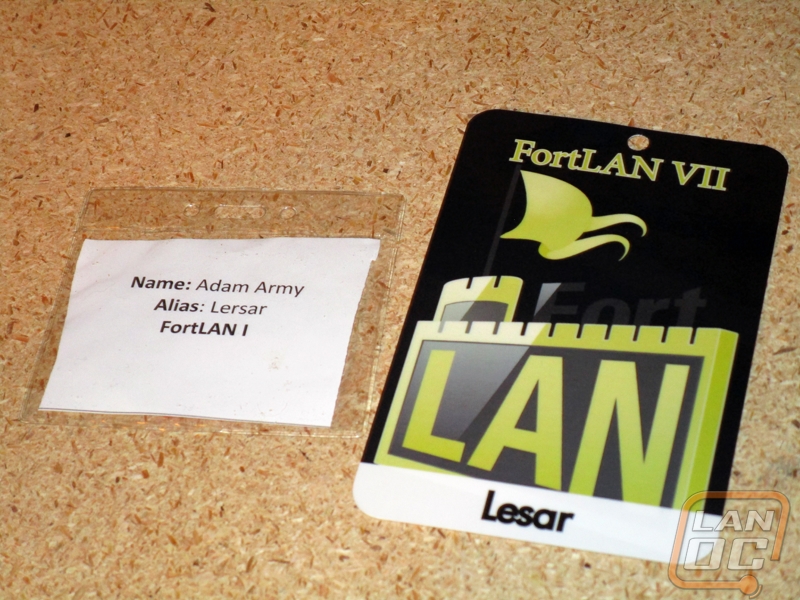 FortLAN VII was the first event that our friend Keary “Kelf” Ball was able to attend since he returned from his deployment (outside of LanOC) so we were especially excited to have him along with us. Fort Wayne is close enough that we could drive back and forth each day, so Saturday morning we packed into my car and set off to the West. I’m not exaggerating when I say packed, either. We played PC-and-bag Tetris in the trunk, shuffling items around between it and the vacant back seat until we found a reasonable arrangement. Keary insisted on bringing a Corsair 600D (full tower) despite having a functional LAN rig built in a much smaller Cooler Master Elite 120. My laptop bag was dwarfed between it and Wes’s In-Win D-Frame Mini.

The drive to and from LAN parties are usually some of my favorite experiences, and while Fort Wayne is one of the shorter commutes we still had time to chat about a few of the games currently stealing our free time in between Wes and Keary critiquing my driving. We tried to pay homage to Team Waffle Train (especially after my discovery of their delicious cheesesteak sandwiches at NeXus LAN 16), but to our surprise there was no Waffle House near. Instead we stopped off at IHOP, a ritual we’d repeat the following morning as well.

Originally we had planned on showing up a little early, since it’s usually a little easier to unload, but we pulled into the parking lot only a few minutes before the event officially started. The carts and elevator were in high demand so we decided to just carry things in by hand. If you’re thinking “but Adam you have a laptop it can’t be that bad,” you’ve fallen victim just as I did. It turns out that only having one bag to carry in means you have extra hands to help carry in your friends’ stuff. We managed to get (mostly) everything in one trip though and were setting up in no time. 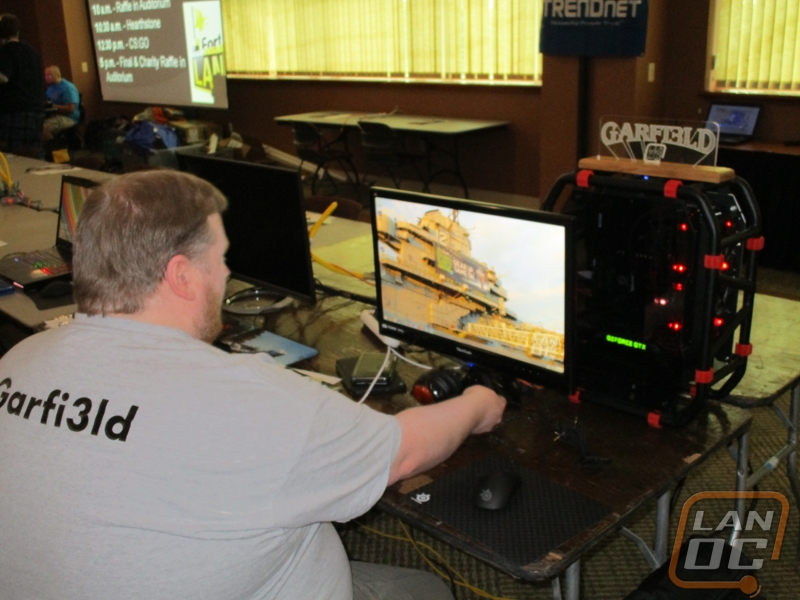 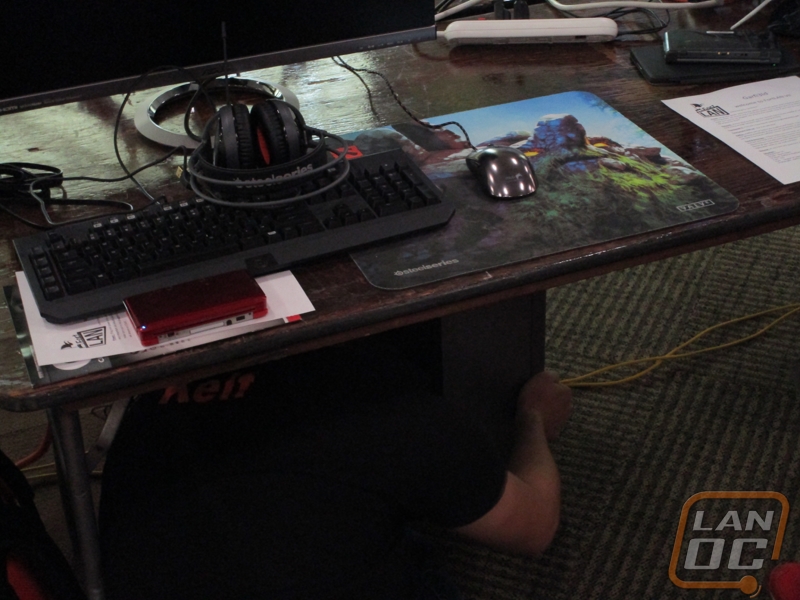 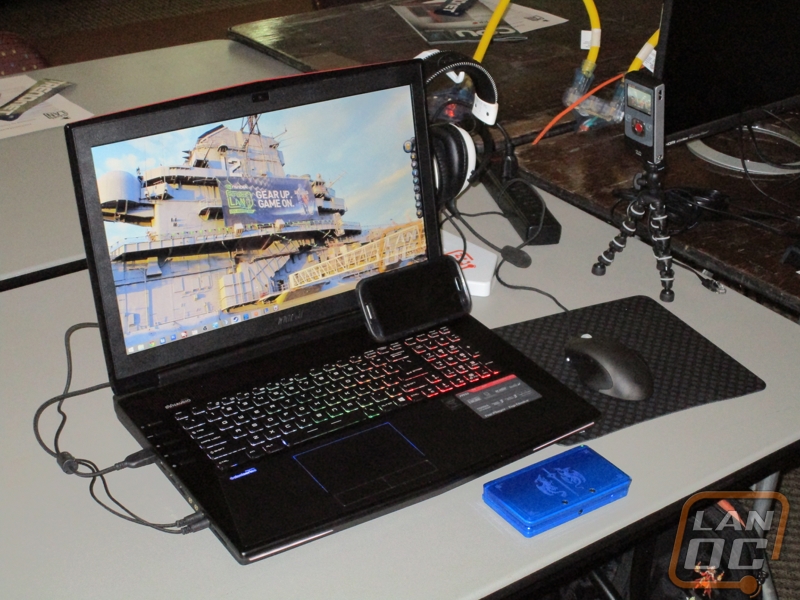 Registration was just in front of the auditorium outside of the hall we’d be gaming in, and moved pretty quick for only two people running it. In addition to the raffle tickets that came with the seat purchase, attendees could also earn tickets for items in the charity raffle by bringing canned foods for donation. This is an awesome thing for LANs to do, having been on the admin side of these events there is already so much to worry about, so volunteering additional time and manpower to collecting and delivering donations is generous in itself. The attendees were already adding plenty to kindness with stacks of cans as we picked up our badges. 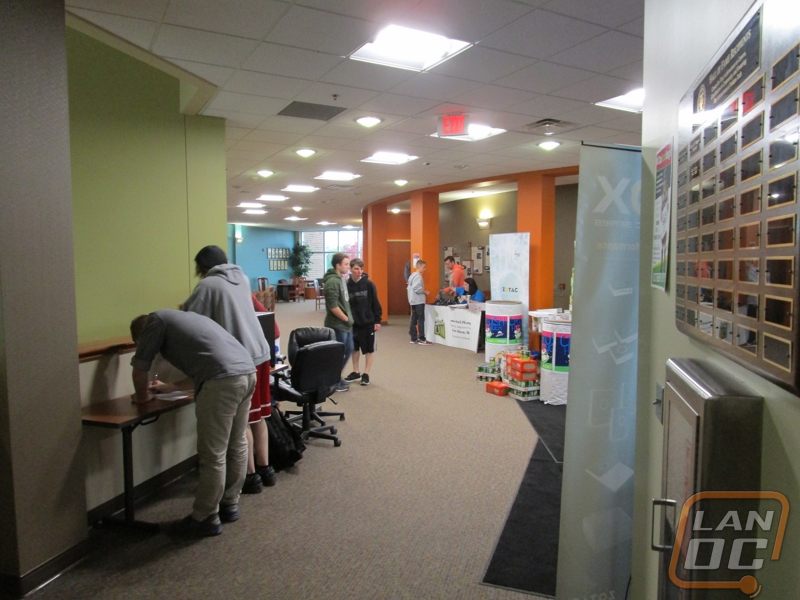 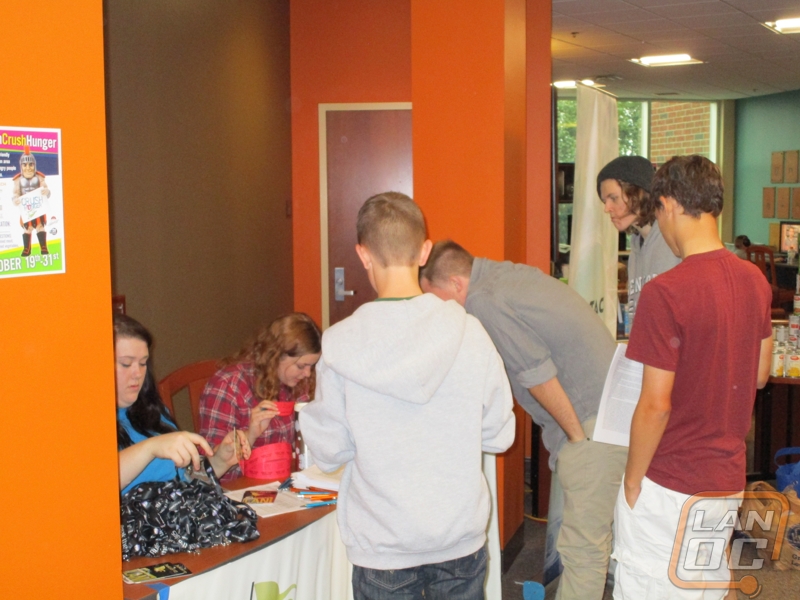 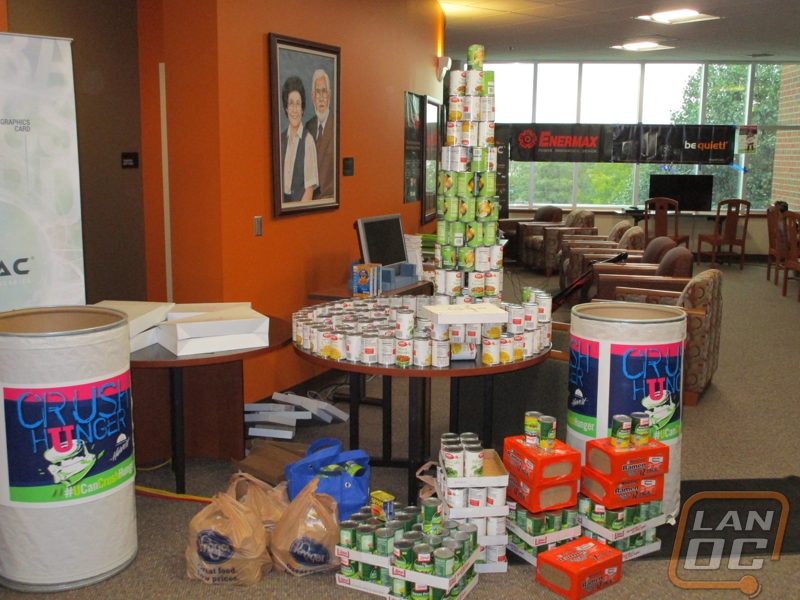 Team Fortress 2 is a staple LAN title for a lot of reasons. I hear a lot of people comparing the upcoming Overwatch to it and while I’m looking forward to the latter, I have seriously doubt that it will be able to match the LAN support. You can play it offline, host listen or dedicated servers, and finding what servers people around you are playing on is fairly simple. This also makes it a good “setup” game; it’s become a habit to jump into TF2 once you’re setup and get a game going for others to join when they’re connected. In this case, FortLAN had servers online that would be used later for tournaments so we just hoped in there.

The back of the hall was lined with projectors which FortLAN used for event information such as schedule and tournament winners, but one was hi-jacked for the LCS World Championships that were going on that weekend. The opposite side of the room was furnished with counters that were home to food, drink, and items for sale. Around the corner outside of the hall was “Console Village”, an area with console systems and TVs set up for anyone to play. 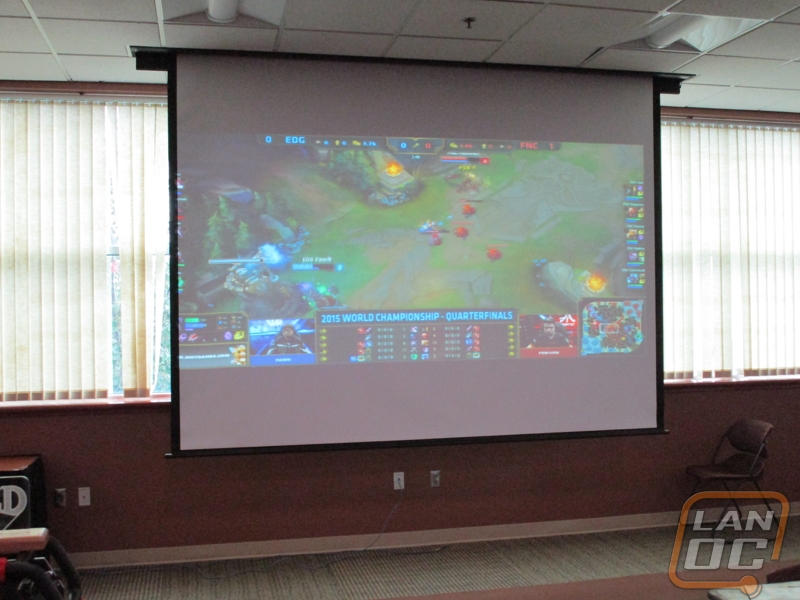 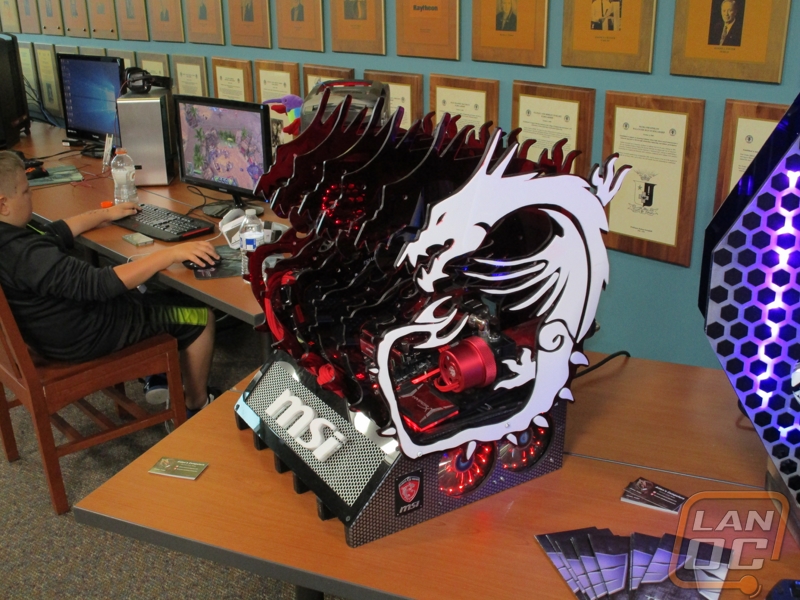 Behind the registration table in the same hallway was access to the auditorium, which FortLAN utilized for their raffles. Standing during raffles has become a ritual at most events, but the lecture-style seating was a really neat approach. Space issues usually prevent a dedicated area for these sort of giveaways, not to mention one that has dedicated seating. Having this option in the venue afforded some welcome comfort while still avoiding issues of people sitting at their computers during drawings (such as not paying attention if their name gets called). 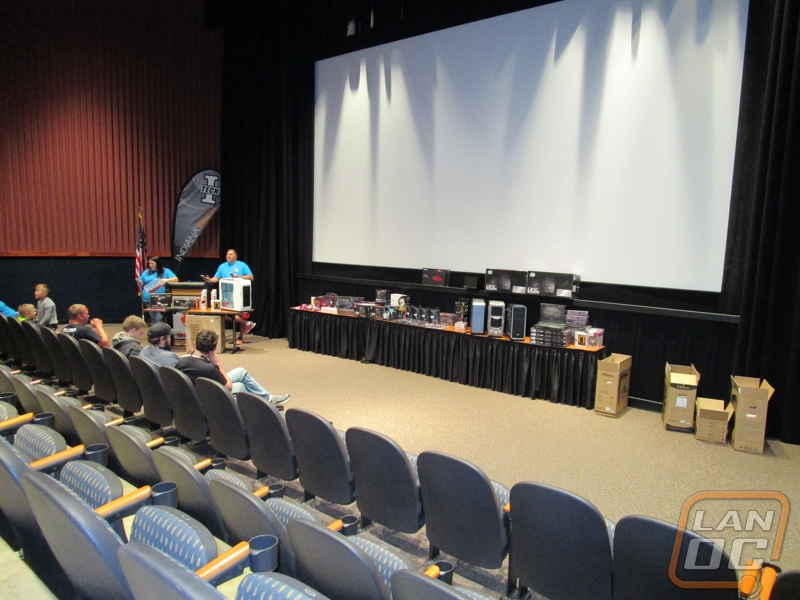 The tournaments were a pretty big draw for this event. I saw more than a few posts in and out of their event page on Facebook trying to organize teams, including Reddit posts. Despite knowing we’re about to get our asses kicked, we typically participate since it is organized play after all. We decided to play in the Team Fortress 2 and League of Legends tournaments, though there were several others such as Heroes of the Storm, Counter-Strike: GO, and Heartstone. The former was random teams and Keary’s made it all the way to the finals, losing in an extremely close Payload Race on Hightower. League of Legends was a bring-your-own-team format and double elimination. Having administered several single elimination LoL tournaments at our own events, I admire the staff’s ambition to support that kind of bracket. It’s a pretty big time investment; as we returned to the morning raffle on Sunday, James “jjsky5000” Fislar (organizer of FortLAN) mentioned that the tournament had only finished a few hours earlier.

We dropped fairly early, scoring a few wins in the loser bracket before being knocked out. We came close to forfeiting what would end up being one of our wins due to one of our players starting a solo queue game immediately after our first loss, not realizing it was double elimination. For those not familiar with LoL matchmaking, even if you leave a game in progress you can’t join another until it’s over. Staff and the team we were matched against were patient enough to wait it out though. We got to know the other team while we waited, and decided that if we couldn’t face each other in the tournament we’d at least play a game of Ultimate Bravery later that night.

FortLAN packed a full schedule of events into their seventh event, and although they had a great venue it still takes an awesome team to pull it off. Thanks to everyone on the FortLAN staff for a great event, we’re looking forward to the next one! If you’d like to join us, registration is already open for FortLAN VIII, taking place on February 27th of next year. You can find more information on their website or from their Facebook page. 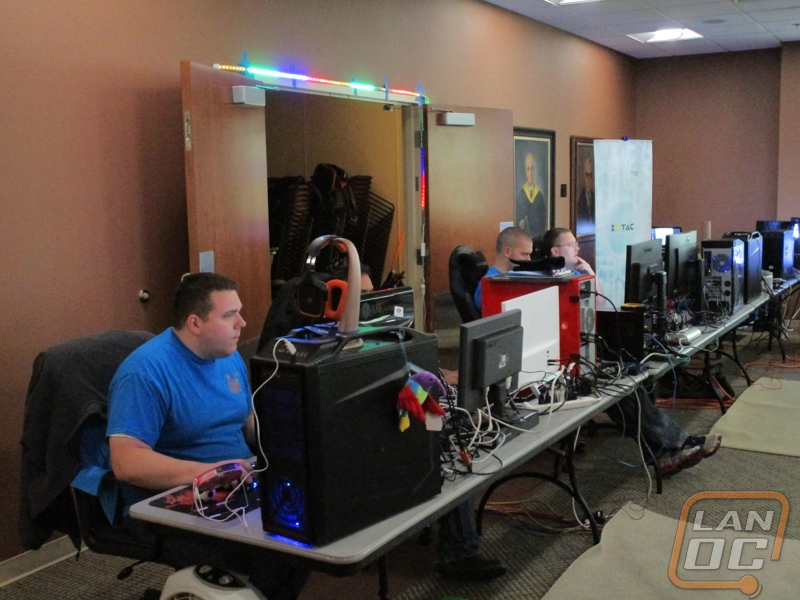 Finally, I recorded some of our travel and game play from FortLAN VII which you can watch below. Enjoy!

Author: Lersar
Contributing Editor / Event Staff
Adam is a big proponent of LAN parties, esports and speed-running, and helps organize our semi-annual LAN events. He has covered hardware and software reviews of a wide variety, but most content these days come from event coverage, such as other LAN parties.
Discuss this article
Log in to comment
Posts in discussion: LanOC at FortLAN VII

The first ten seconds of that video are some of the best.
Read More...