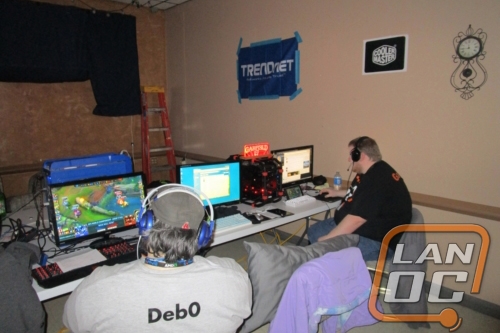 It’s been a little over two years since I made it to a NeXus LAN, and if I recall correctly it was their first event to be held at their new venue in the Miamisburg Moose lodge. The building was familiar with the signature round tables and the large stage area packed with busy staff members. The registration and prize tables seemed to spill out from the stage, and as we continued in it became clear why: NeXus had grown substantially since my last visit. The tables seemed to have doubled, claiming another room once separated by a divider.

Exploring this new addition reminded me that the lodge staffed their kitchen/bar during the event, the order window placed at the back of the new room. We continued on to find a traditional bar area and shared a Bawls with David “Renegade” Peeples, the organizer of NeXus LAN. 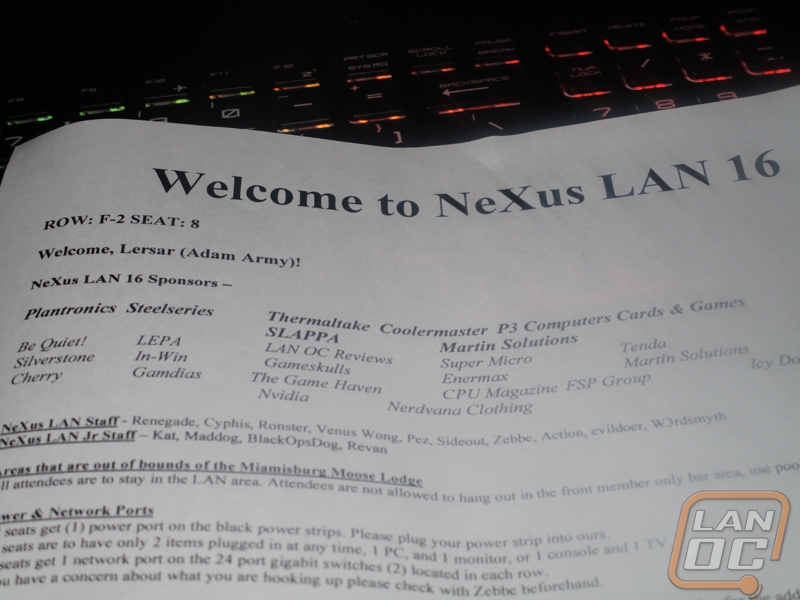 Unfortunately my camera was acting up so I don’t have many photos but I did manage to record most of our experience including the drive, tournaments, meals, and so on which I’ve edited into the video below.

Having played the role of tournament coordinator at our own events before, I was seriously impressed with how many NeXus offered at this event, as well as the variety. Team Fortress 2 broke the ice on Saturday afternoon, followed by Counter-Strike: Global Offensive in the evening and ultimately Mortal Kombat X late Saturday night. Tabletop games have a pretty substantial presence at NeXus, with Magic: The Gathering and Cards Against Humanity tournaments taking place. Heroes of the Storm won over League of Legends in the popular vote just as it did at our own v17 and started the day early Sunday. Having just released in July of this year, Rocket League hasn’t had a lot of opportunities to be at events in this area, but when it has it always results in some of the most emotionally invested and enthusiastic games I’ve seen. Scheduled at the heel of the NeXus 16, Rocket League had the crowd alive even as the final hours approached.

Though we were seated on traditional straight tables this time, we did sit at the mentioned round tables before and they made up at least half of the seating at this event. While I think they do forfeit some personal space, these tables are by no means small and when organized right create a better opportunity for social interaction. I happened to get a seat across from Wes, Alex, and Debo and with the traditional back-to-back table design there was a lot of space between us. This is great for equipment, but not so much for having a conversation. To make things worse, the two people seated next to me did not make it. I had plenty of room, but felt pretty isolated. Think of it like a bar at a restaurant, compared to a booth. You can really only talk to the people to your right or to your left with straight tables. The round tables are a pretty neat solution to this, but as mentioned things are little more compact. 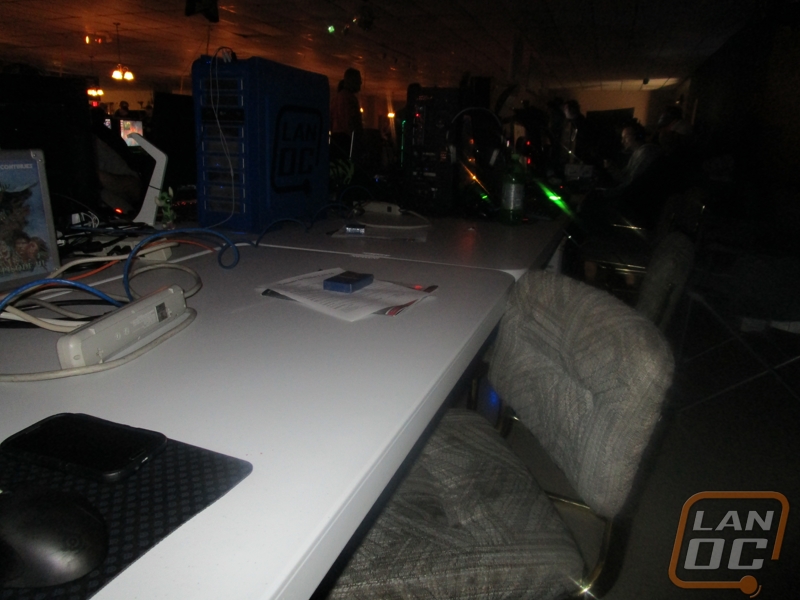 I also mentioned the kitchen and bar. While the convenience of having food on site is obvious, they do create a few subtle challenges. For example, outside food is not permitted while the kitchen is open, and no outside alcohol is allowed whatsoever. Additionally, alcohol can only be consumed while the bar is serving it. These are rules enforced by the lodge and/or state law. Personally, the only time I want to bring outside food to a LAN is convenience, otherwise I want to go out and experience some of the local offerings. Since you can’t really get more convenient than a made to order menu on site, I had no problems here. As far as alcohol, I don’t really drink so the only thing I was concerned with was people getting a little rowdy but either through responsibility of attendees or diligence of the staff, I couldn’t even tell it was there.

Overall we had a great time at this NeXus LAN. Thanks to all the staff members that made the event possible. While their next major event date has not been announced, there is a mini scheduled for later this month. You can check out their website/Facebook for more information, and keep an eye out for more details on NeXus LAN 17. Hope to see you there!

Author: Lersar
Contributing Editor / Event Staff
Adam is a big proponent of LAN parties, esports and speed-running, and helps organize our semi-annual LAN events. He has covered hardware and software reviews of a wide variety, but most content these days come from event coverage, such as other LAN parties.
Discuss this article
Log in to comment
Posts in discussion: LanOC at NeXus LAN 16