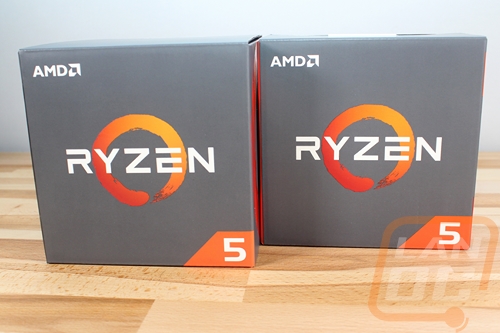 Well, the Ryzen 7 launch has a surprising amount of excitement and drama mixed together with the impressive numbers but with memory issues and game performance causing very polarized opinions on social media and on websites like Reddit. AMD fans even started going after reviewers who’s testing methodology didn’t match what they thought was best. But most of that has finally calmed down a little, just in time for the Ryzen 5 launch right?

So I can finally say that AMD seems to have some of the issues pinpointed and things have been improving and the gap between Intel and AMD has closed a little. Memory is still finicky but better than at launch with more updates coming. The power mode settings have a newly introduced patch from AMD to be able to fix them. We have even seen game patches start to roll out with sometimes significant buffs for Ryzen CPUs. Ashes of the Singularity being a huge one of course and I tested that one in our performance testing. I’m still hoping for game patches from more popular titles though. Ashes is great for benchmarking, but I don’t think it is very popular so the patch doesn’t really help most Ryzen owners if they don’t play it. But it is great to see that improvements are possible and even relatively easy if the speed of the patch was any indication.

So where does that leave the Ryzen 5 processors? Well, sadly this time around I didn’t have comparison CPUs from Intel to be able to get the best idea of how they perform at matching price points. The 1600X is priced to compete with the i5-7600K with its $249.99 MSRP and the 1500X is priced with the i5-7400 with both coming in around $189.99. Where things get interesting is the 1600X is actually a 6 core CPU with 12 threads competing against an i5 with just 4 cores and 4 threads. Even the cheaper 1500X still doubles the thread count over intel at that price point. So like Ryzen 7, AMD is relying on more threads and cores to help edge out performance. The 1600X did surprisingly well in a lot of our benchmarks, even when compared to just Intel’s fastest and the Ryzen 7 CPUs. The high clock speeds of the 1600X even have it outperforming the 1700X in a lot of tests.

Now the good power usage on the Ryzen R7’s when compared against Intel’s X99 chips doesn’t translate as well down to Ryzen 5 where you are competing with the 7700K and lower power draw. The 1600X was up close to Ryzen 7 due to the higher clock speeds and TDP and the 1500X was on par with the 7700K for power usage when that is a much faster CPU.

Even though I didn’t have numbers from Intel’s direct competitors, I was impressed with the 1500X compared to the older but still very fast 4770K. It was faster in the tests where we have 4770K results and right now the 4770K is selling for 60-80 more used than a new 1500X will run you.

In the end, the 1500X ends up being a great price point CPU for people looking for people who will be able to take advantage of the additional threads at a budget price point. You can pair it with a cheaper B350 chipset and stay under $280-290 leaving room for a kickass video card. The 1600X with its higher clock speeds and the two extra cores ends up being the sleeper here though. You get performance up near the 1800X and a few times even faster at a cheaper price. It’s even cheaper than picking up a 1700 and overclocking as well. Now the 1600X doesn’t come with a stock cooler like I would prefer, so you will have to save money for that. But the 1500X does include one adding value to that new budget build. In the end, I think Ryzen 5 is really going to open up the budget builds without really dropping performance. Now we just need to see ITX boards for those sweet sweet Ryzen LAN rigs for this summer. 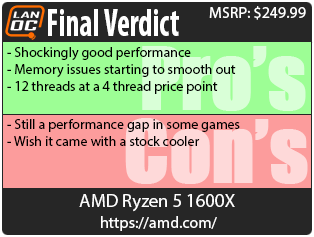 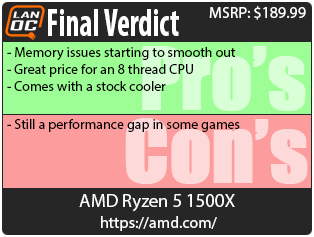 You might call him obsessed or just a hardcore geek. Wes's obsession with gaming hardware and gadgets isn't anything new, he could be found taking things apart even as a child. When not poking around in PC's he can be found playing League of Legends, Awesomenauts, or Civilization 5 or watching a wide variety of TV shows and Movies. A car guy at heart, the same things that draw him into tweaking cars apply when building good looking fast computers. If you are interested in writing for Wes here at LanOC you can reach out to him directly using our contact form.
Discuss this article
Log in to comment
Posts in discussion: AMD Ryzen 5 CPUs