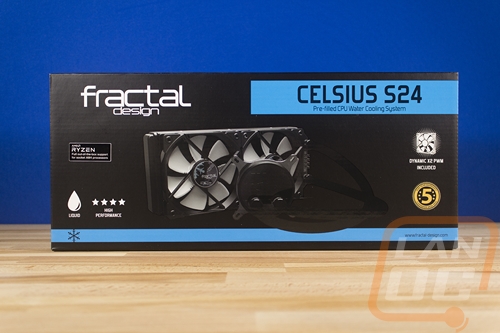 The box for the Celsius S24 is dark black with blue accents. On the front, they have a photo of the kit all together along with the Fractal branding up in the top left corner. The back of the box keeps things extremely simple. There is a photo of the pump/block portion of the cooler and they have lines going to four key features. The other half of the back also talks about the two different modes you can run the Celsius S24 in, the Automatic mode optimises pump and fan speeds for you and PWM lets the motherboard control everything or if you get into your motherboards fan settings you can control everything. Also on the box they did slip in a line drawing of the radiator with dimensions on the end along with a list of compatible sockets, this is important information when shopping for hardware in a retail store. 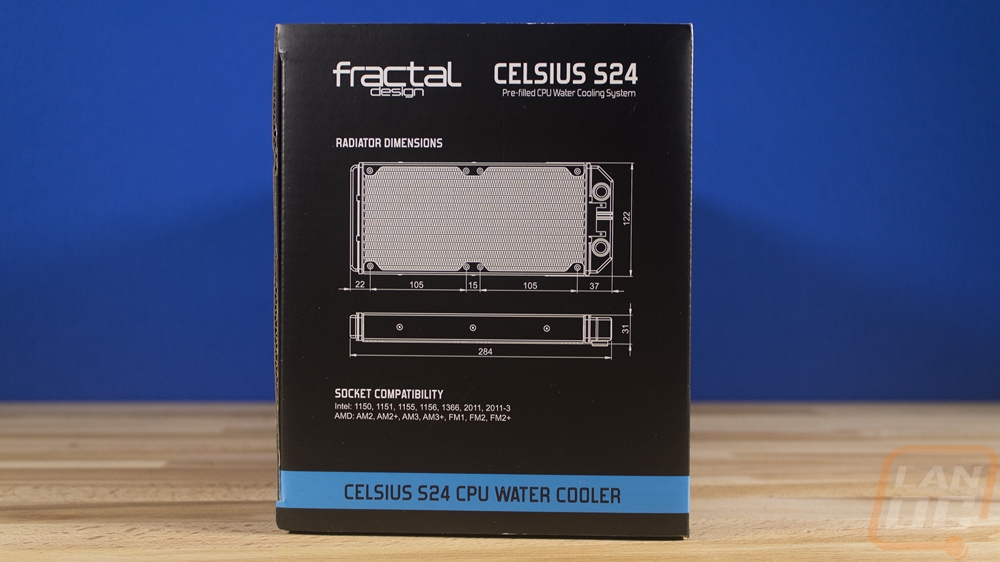 Inside the box, everything comes tucked away in one large cardboard tray. It has a place for the pump and radiator. The two fans come uninstalled and in their own packaging, and then down on the end is a bag filled with all of the mounting hardware. 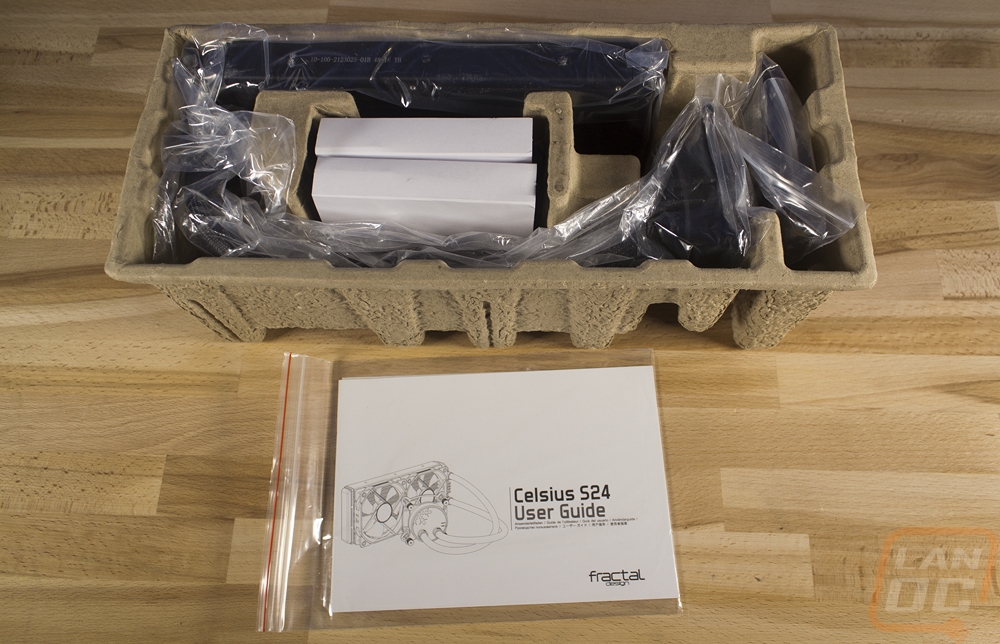 They include a back bracket for Intel’s mainstream sockets and the pump bracket for AMDs AM3 and AM4 sockets. This kit does support Threadripper, you just have to use the bracket that is included with your CPU. Then the screws in the bags are split up depending on the socket as well. I wish they labeled them. There are new AM4 screws that have a weird guard around them, the bag with two sets of standoffs are for both 2011 and mainstream Intel sockets and the other bag with standoffs are also for AMD but are an older design than the other standoffs. The last bag has the washers and screws needed to install the fans as well as shorter screws for installing the radiator into a case if you mount the fans on the inside. Also inside the box, you get a few documents in a bag. One is the User Guide, another has Ryzen installation guidelines. Then the red paper is just a note about returning faulty kits to Fractal, not your retailer. 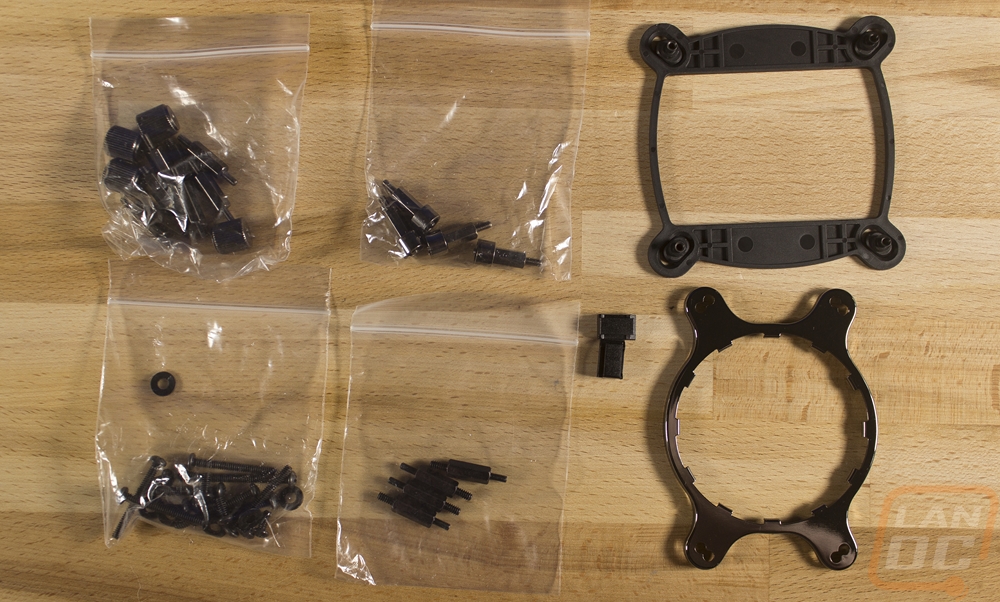 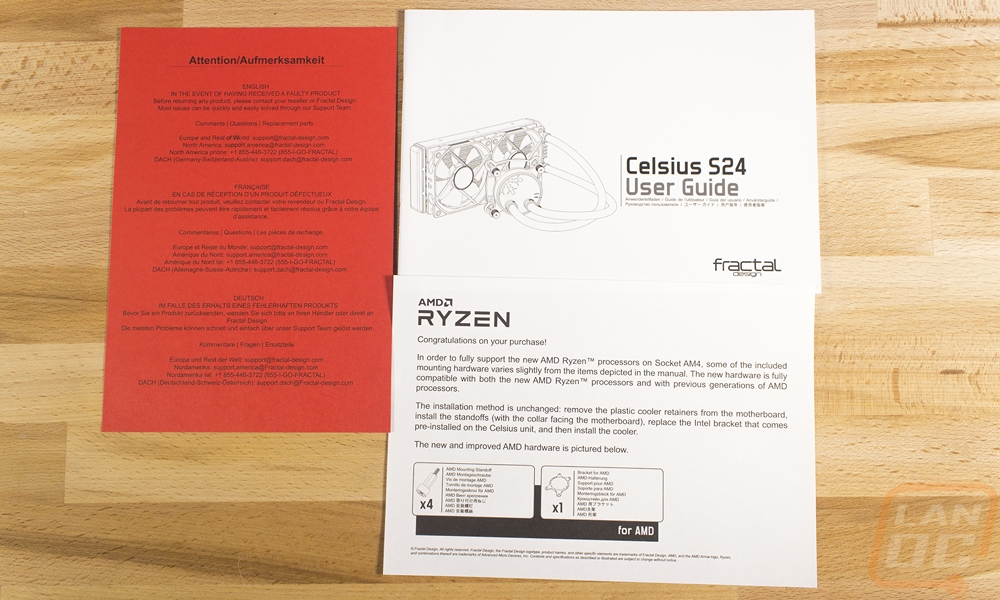 So here is the whole kit without all of the brackets and extra hardware. Like Fractals cases the Celsius S24 is mostly blacked out other than that contrast of the bright white fan blades. The S24 kit is a 240mm kit meaning it comes with two 120mm fans. They do have a larger 3 120mm fan kit as well called the Celsius S36 but there is currently no option for a dual 140mm kit that seems to becoming more popular. Both the S24 and S36 have the same pump and hose layout, it is just the radiator that is longer so you can keep that in mind. 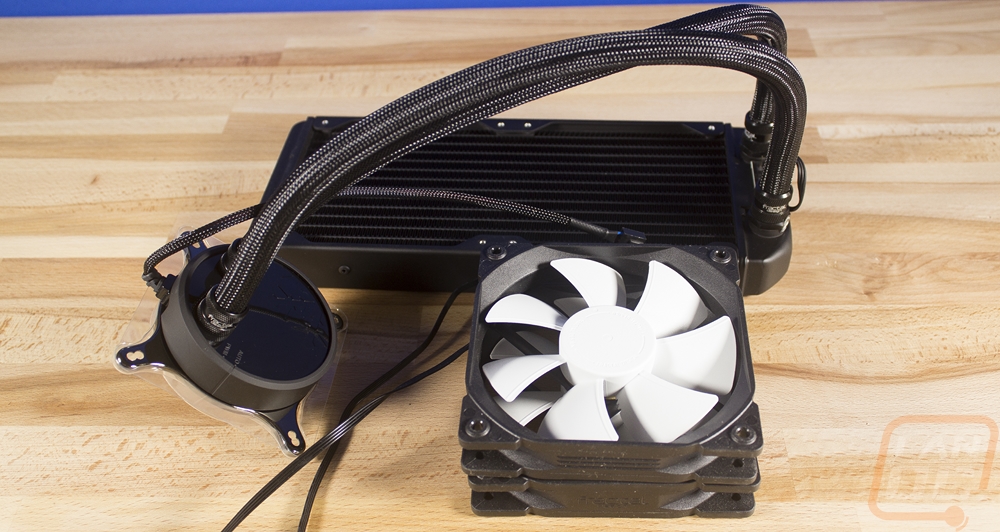 Unlike EVGA, Fractal didn’t go with a custom shape for their pump housing so they are able to run the different brackets like the bracket included with Threadripper. But beyond the shape and the mount for the bracket, there are a few different things here. There aren’t any special lights or effects and there is no need to hook up to USB. The pump has a glossy black finish with Fractal snowflake embossed into it. The ring around the top has a matt finish and it actually moves, this is how you can flip between a built in auto mode to PWM changing how the pump and fan are controlled. The pump design might be simple and clean but the sleeved tubes with fittings at the end that emulate custom water cooling are a little more flashy. The fittings have Fractal Design logos on them and are knurled just like a custom water cooling fitting would be. Then on the bottom, they do ship the kit with thermal paste already applied but I was more impressed with the finish on the copper base plate. AIO kits aren’t exactly known for the best surface finish and while this isn’t as good as the mirror finish on a custom block, it is an improvement over a lot of the AIO’s. 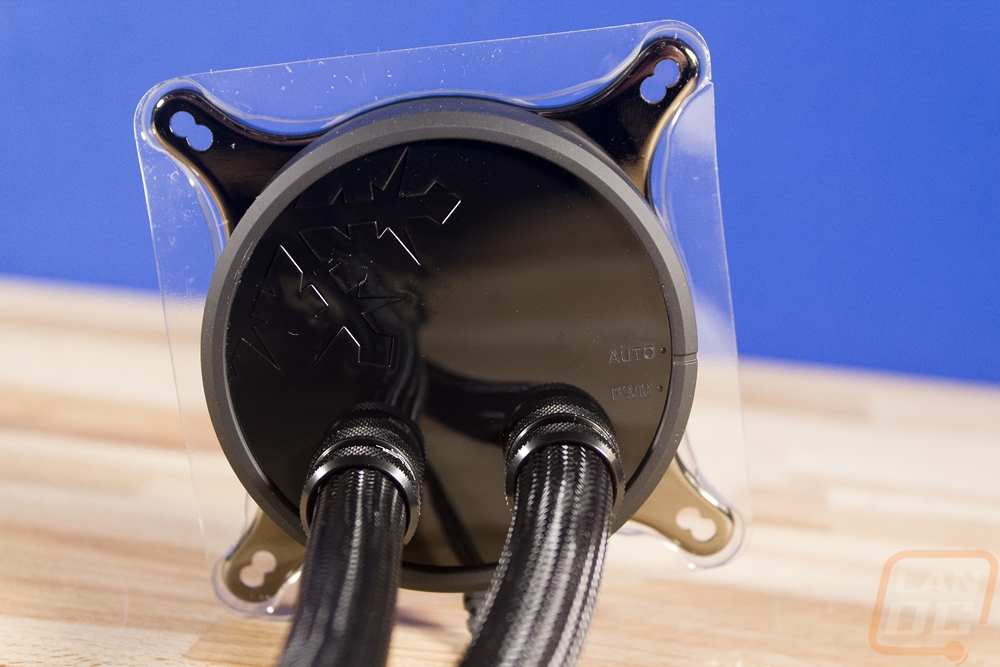 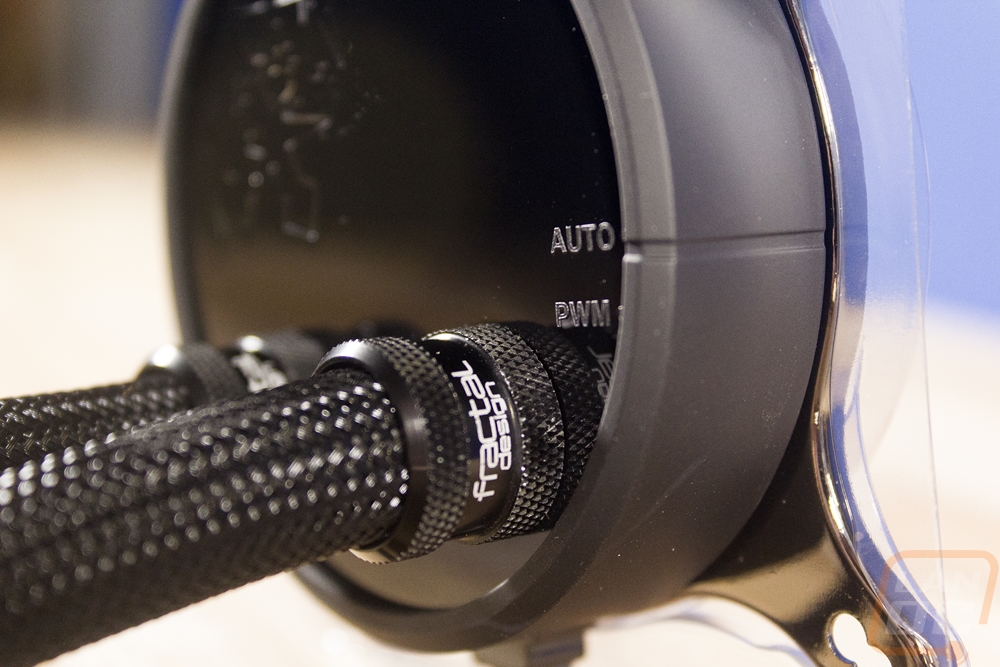 Like I said before, they didn’t require a USB connection for this kit like the kits with RGB lighting built in. So what you get is just a short 4-pin PWM fan cable. I like the heavy sleeving on this one as well though I would still always prefer the flexible cabling like what they used on the fans that I will talk about here soon.

On the radiator end of the kit, we have a mostly standard 2x120mm radiator. The overall thickness of this one is 3cm thick or a little under 1 ¼ inch thick. This is a little thicker than a lot of the AIO kits but not as thick as the average custom loop radiator. I really like that it has a flat black finish, not the normal semi-gloss finish that most AIO radiators have. On this end, we have the same fittings as on the pump end as well as the sleeved hosing but if you look closely it does look like the hoses can be removed on this end, just below the fake fittings is a real one. What Fractal did here that is special though is right in between those two fittings. The slipped in a small PCB that splits up the fan signal and allows you to run your two fans without having to hook them to your motherboard as well. This is especially slick because the cable that powers the PCB is completely hidden. They hid it under the sleeving and it goes all the way into the pump housing without being seen. This allows you to keep your wiring really clean.

The fans are really what bring the Fractal styling though. Fractal likes to add a touch of white with white fan blades in their cases along with white PCI slot covers and hard drive cages. The two white fan blades here help stick with that style. The fans are of better quality than I expected as well, they have a solid construction and are heavy. The bearings feel smooth and don’t vibrate the fan when hand spun like a cheap fan does. They went with thin flexible cables for the fans like they should have with the pump cable as well. The two cables are the same length so you will have to do a little work to clean up the wiring on it and then for the long cord Fractal does include these tiny stick on clips that will hold the cable up against the fan so it doesn’t stick up like in my picture below. 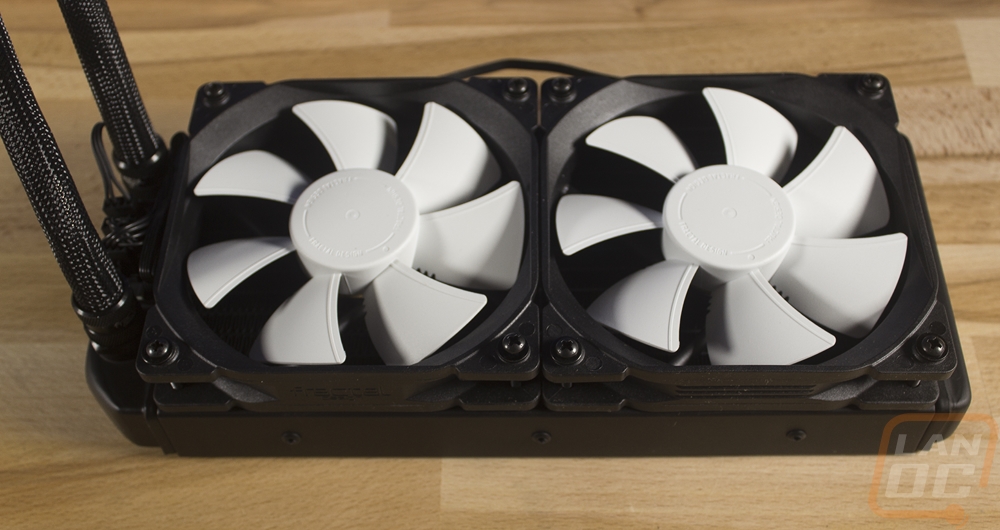 We have 676 guests and one member online