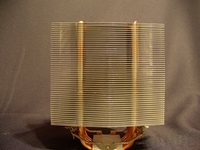 Sunbeamtech produces countless pc parts ranging from acrylic cases to keyboards. What more people don’t know about them is they also own Tuniq. Tuniq produces some of the best performing heatsinks and one of our favorite thermal pastes TX-2. With that in mind it wasn’t that surprising when they approached us about checking out their latest heatsink the Core-Contact Freezer. Considering their history I expect it to perform well. But we have recently tested a couple other good performing heatsinks. How will the Core-Contact Freezer stand up to them? Read more to find out. 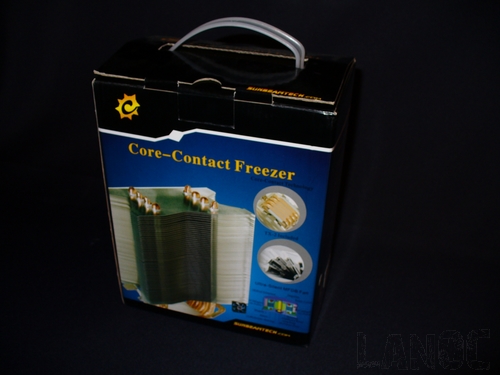 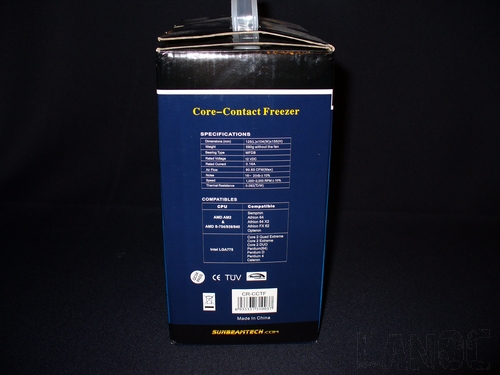 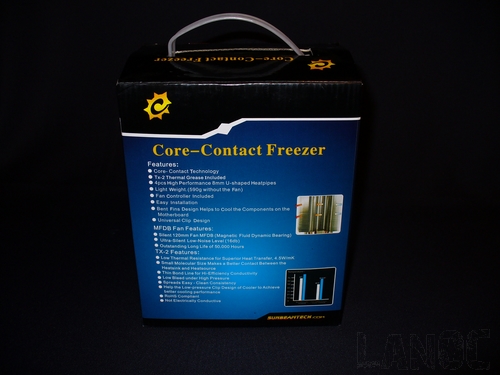 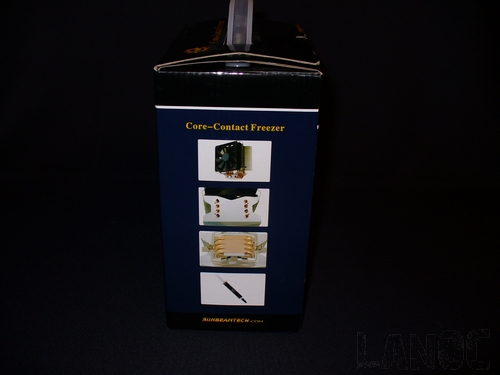 Sunbeamtech packaged the heatsink into a blue and black box, this box is huge! It just gives you an idea of how big this heatsink is. On the front they have a picture of the heatsink along with a breakdown of the fan bearing. They also point out that TX-2 thermal paste is included, very nice touch. The side of the box has a Spec list along with a list of compatible CPU’s. This heatsink will just any Intel 775 and Amd AM2, 754, 939, and 940’s. The back of the box has feature breakdowns for the Core-Contact Freezer, the MFDB fan, and the included TX-2. You will find other pictures of the heatsink on other parts of the box including close-ups of how the heatpipes directly contact the CPU. 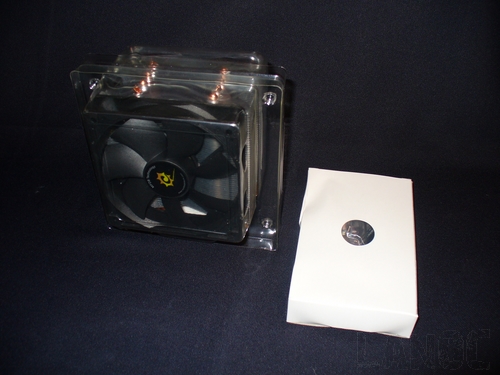 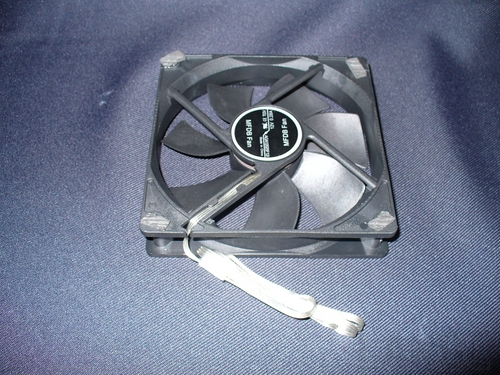 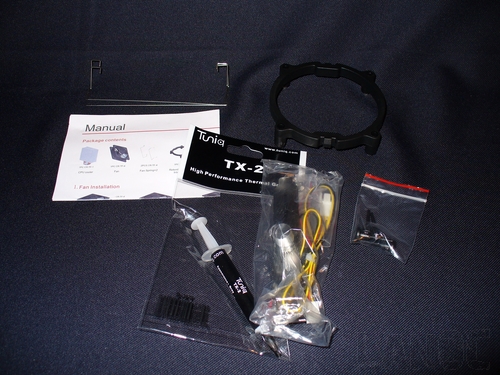 Inside the box they have packed the large heatsink and fan in a plastic shell and then put everything else on top in one box. Digging into the box you will find a color manual, two fan clips, a round plastic mount; retail sized and packaged tube of TX-2, and a fan speed controller. It’s really impressive to see the TX-2 and the PCI slot fan speed controller included with the heatsink. They both add to the value of the overall package because you can buy them both separately. 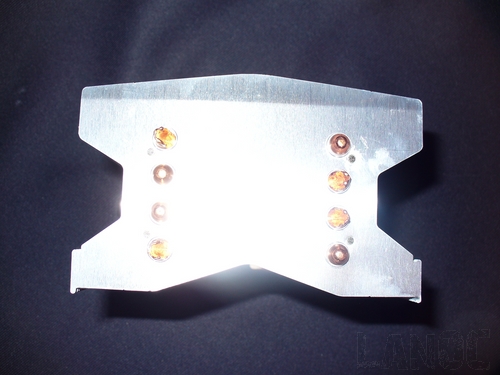 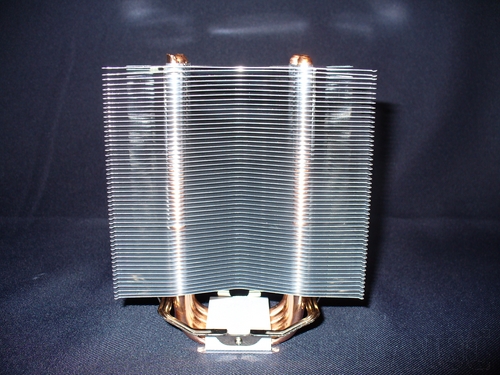 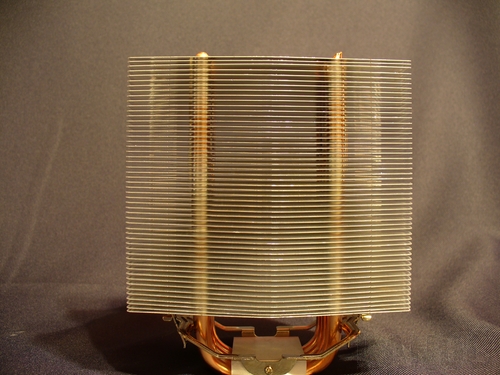 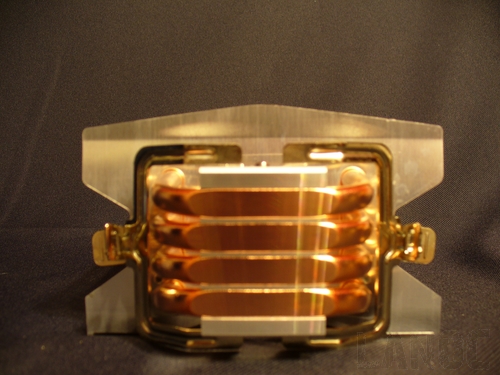 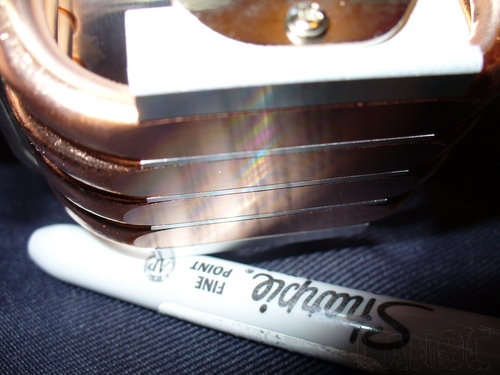 Starting with our old heatsink removed and the old thermal paste cleaned up. Until I took a close look at the instructions I was worried that this was going to be another heatsink that needs the motherboard to be removed to install a backplate. As it turns out they have come up with a fairly simple design. They include a round mount that looks like an AMD mount. The reason it looks that way is because I believe it is. You drop the mount into the 4 holes and don’t have to worry about snapping or securing any clips or springs. Once the mount is in its place they include 4 plugs that slide into the mount. Once the plugs are in place the mount is very secure. The plugs and mount remove just as easy incase anyone was wondering. Once you have the round mount securely in place you can take the wire clips and secure the included 120mm fan to the heatsink, remember to keep in mind the direction of airflow in your case when doing this. Now we installed the included fan controller into an empty PCI slot and router the cables up near the CPU area on our Abit motherboard. Next you want to take out the TX-2 and spread the proper amount onto the CPU. You are now ready to install the actual heatsink; you do this by securing one of the tabs to the mount we installed earlier. Once you are sure you have that one secure you can secure the one on the other side. Like I said before this installs just like any AMD heatsink, so for those who haven’t had to install a heatsink on an AMD you have to push fairly hard to get the 2nd tab near its mounting spot. Now that the heatsink is installed all is left is to plug the fan into the speed controller, and the fan speed controller into the CPU fan header on your motherboard. Once it was all said and done we did have a small problem with the fan clip against the Northbridge heatsink. It wasn’t enough of an issue to worry about in the end. 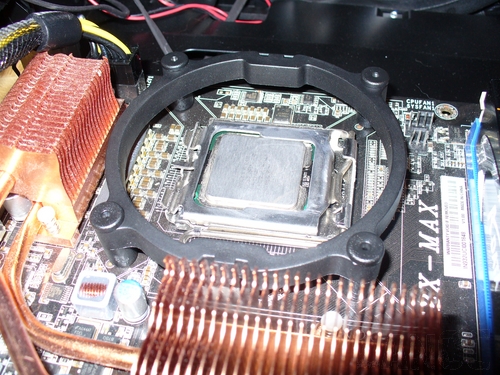 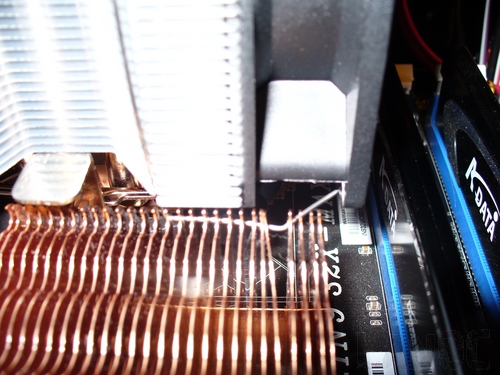 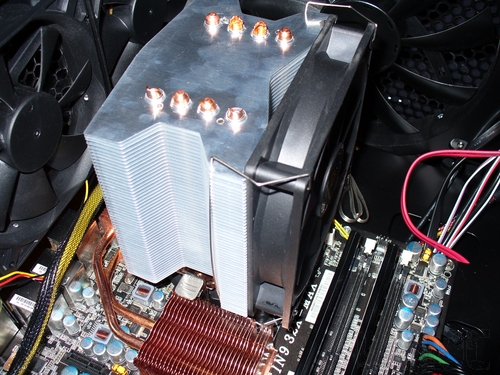 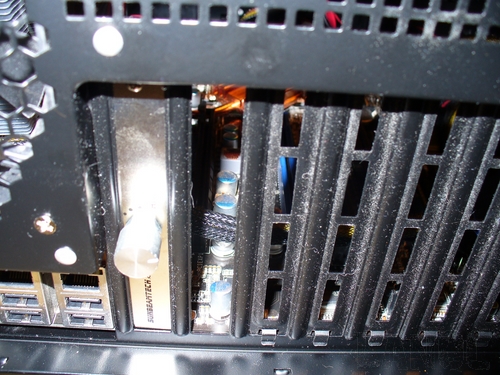 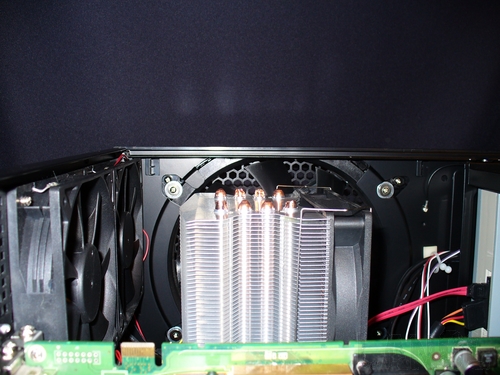 When it comes down to it, with heatsinks the most important thing is the performance. What the box looks like or how difficult the installation was are things you will only deal with for short periods of time. You have to rely on the performance of a heatsink to keep your CPU cool and safe sometimes for years. In the past we have tested a few other high quality heatsinks. In order to get the most accurate results we put the Core-Contact Freezer through the same testing we put the others through. With our test setup running with stock clocks, and in a room with the tempature controlled to 70 degrees. All of the fans on our Antec Twelve Hundred case are run at high, and the heatsink fan is running at 100%. We used Prime95 to heat up our quad core. Using RealTemp we let the pc idle for an hour to get an idle temp. As you will see in the graphs below the Core-Contact Freezer out performed all of the heatsinks we have tested in the past two degrees to the closest competitor, 17 degree's from the stock heatsink. Firing up Prime95 to heat everything up we let it run for an hour, using the highest maximum temperature reached as our temperature in our graph. Yet again SunBeamTech’s Core-Contact Freezer beat out the competition a full 4 degrees cooler. Considering the size of the heatsink its not a huge surprise it performed well, make sure to check back in the future also. We are always adding to our database of CPU cooling products. 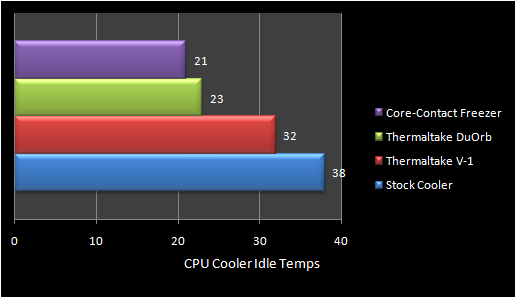 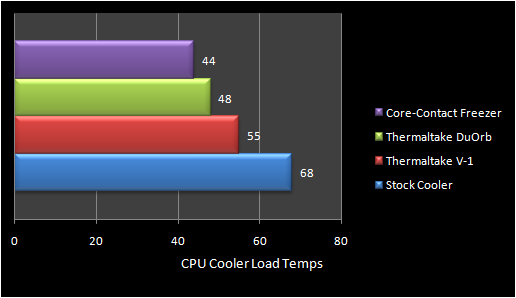 Sunbeamtech’s Core-Contact Freezer is a huge heatsink. There is nothing fancy about the looks, no lighting or style, but it does what a large heatsink is designed too do; cool. The direct contact heatpipes proved to be an advantage; I have a feeling we are going to be seeing them show up on more high end heatsinks soon. The mounting system is very interesting, this is the first time I have seen someone change the mount type fully to an AMD style mount. I personally have had problems in the past with this style mount and did have a little trouble mounting the heatsink. The mount does install without having to pull the motherboard out so that was a big plus too me, and it goes in and comes out easily. The Core-Contact Freezer out performed all of the heatsinks that we have tested up until this point. The most impressive part to that is the price tag. At 34.95 it out performs the other heatsinks as close too half the price! The 34.95 price tag is made even more amazing you figure in the included retail tube of TX-2 and the fan speed controller. Heatsinks in the less than 50 dollar range normally don’t include things too that level it adds value to an already great deal. In the end I can’t find any good reason for everyone who is looking for a good performing heatsink for a great price. 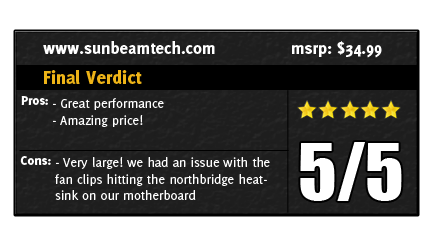 You might call him obsessed or just a hardcore geek. Wes's obsession with gaming hardware and gadgets isn't anything new, he could be found taking things apart even as a child. When not poking around in PC's he can be found playing League of Legends, Awesomenauts, or Civilization 5 or watching a wide variety of TV shows and Movies. A car guy at heart, the same things that draw him into tweaking cars apply when building good looking fast computers. If you are interested in writing for Wes here at LanOC you can reach out to him directly using our contact form.
Discuss this article
Log in to comment
Posts in discussion: Sunbeamtech Core-Contect Freezer

We have 1559 guests and one member online