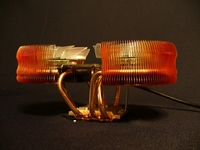 One look at the Thermaltake website and you will be overwhelmed by the amount of products they produce. A good example is in the CPU heatsink section; just for the 775 Socket alone they carry 17! Thermaltake spends a lot of time researching and producing new and innovative products on regular bases. They have been producing heatsinks for various items using an orb design for some time now. Recently they have produced a new line of heatsinks called the DuOrb Series; this time using a two “orb” design. Today we are going to take a look at the DuOrb CPU heatsink Model number CL-P0464. We will find out how easy it is to install, how it performs and if it is a good value for your gaming dollar. Please click to read more. 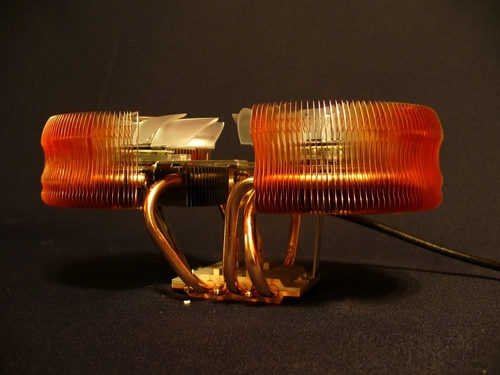 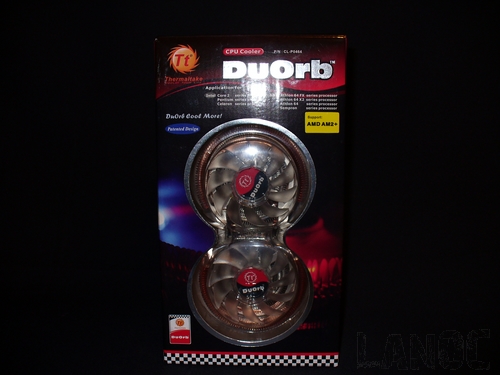 Thermaltake packaged the DuOrb up into a colorful box with a window’s on the front and the back to show off the very good looking but different DuOrb heatsink. On the front with a blue and red theme they keep is very simple but effective with a large window. You can see a good portion of the heatsink and fans from this point of view. Other than the window they have the product name and a compatibility list, it’s nice to have the compatibility list easy for anyone to find. There is nothing worse than spending a lot of money on a part to only find out that it doesn’t even fit in your setup! On the back of the packaging they have a window giving you access to see the base of the heatsinks along with its 6 heatpipes. Above the window they have a short list of features along with a picture of the DuOrb installed on a motherboard showing how the airflow affects other pc components. It’s a little surprising to not see more specifications on the packaging, although it does make for clean and simple packaging. 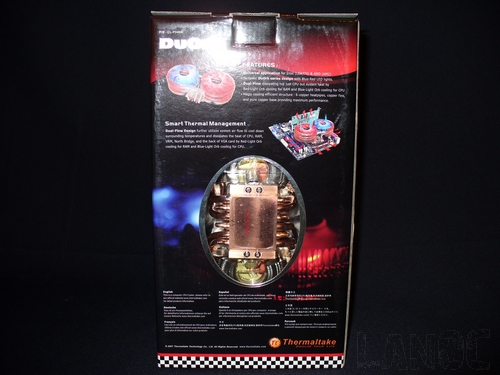 Inside the box we find the DuOrb packed between two formed pieces of plastic. At the top they have packed all of the small bags of parts into a box. One thing that I was impressed with was the small stickers on each baggie telling you what each bag of parts was for. Small details like this make installation a little bit easier. 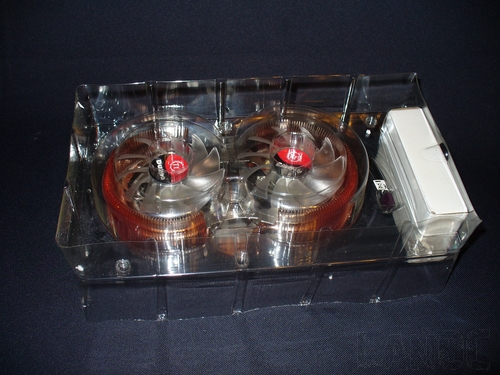 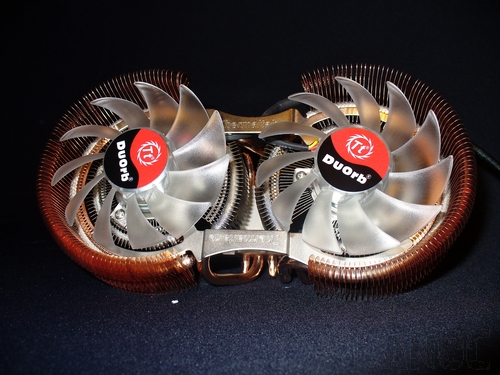 Getting ready for the DuOrb installation I grabbed a tube of Noctua thermal paste, the installation instructions, and the included box of brackets and screws. I removed the stock heatsink and cleaned off the old thermal paste with a paper towel and some rubbing alcohol. Ready for the install now I realize that I have to remove the motherboard to attach the included brackets. Its amazing how much more work it is once you have to remove the heatsink. It would be much easier to install the DuOrb during the initial build. You have to mount two brackets with paper washers and small nuts on the backside of the motherboard. Before you reinstall your motherboard I suggest that you double check the fit on the DuOrb just to be sure you have everything installed correctly. The first time I mounted the brackets I installed them incorrectly, but didn’t find it out until the motherboard was fully installed. 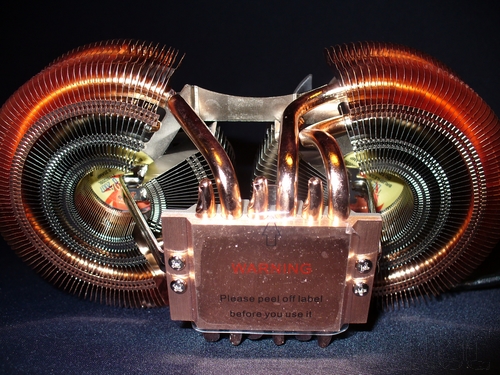 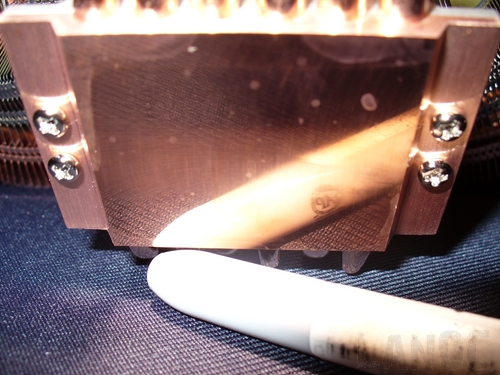 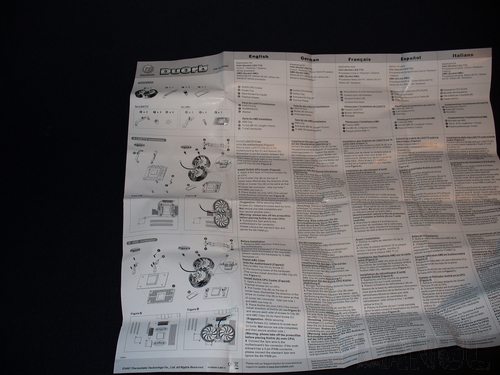 Once you have the motherboard reinstalled you are almost home free. Now you grab the baggy that is appropriate for your motherboard, in our case we needed the 775 socket pack. The only thing in the 775 bag is one bracket and two nuts with springs fitted too them. Putting a rice sized dropped of thermal paste on the cpu before sitting the DuOrb down should be sufficient in keeping good thermal transfer. The bracket fits perfect inside of the DuOrb and you then tighten both of the nuts down. Now the only thing left too do is too plug the fan plug into your motherboard. We our now done! By this time you have noticed how large this heatsink is. If you are installing the heatsink into a new build make sure to have your ram installed before hand , you will not be able to get too it once it is installed. Another thing to keep in mind during your install is the DuOrb must be installed with the shorter side toward the I/O panel. If you do not install it this way it will not fit most motherboards because of the clearance between the heatsink and the back of the case. 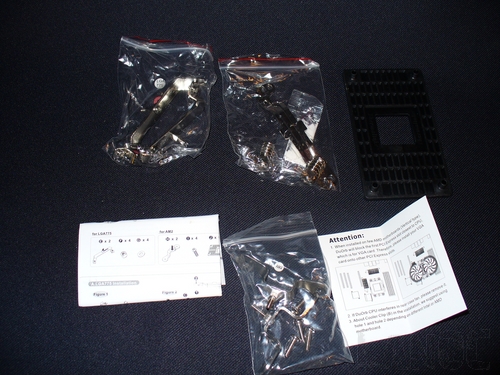 Just about everything performs better than the Intel Stock cooler, but we saw a major improvement! Twenty degrees Celsius improvement is remarkable under load. Speaking of under load, we used Prime95 on the “blend test” to give the CPU a workout. Each test gets 3 full load test and we use the highest temperature reached as our load numbers. Our idle numbers are reached by letting our test pc idle with no apps running other than Abit’s UGuru and Real Temp 2.5. The lowest temp reached after an hour is our idle temp. The room is kept at 70 degrees during all testing and everything was run at stock clocks and settings. 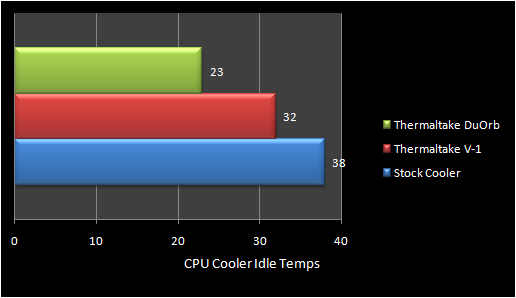 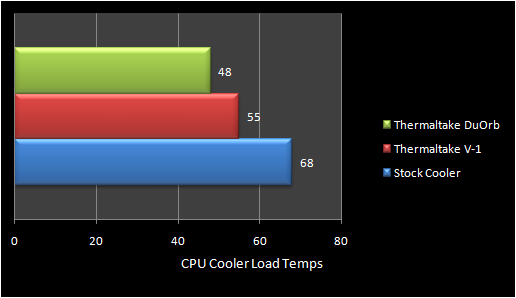 The numbers are impressive, and even better when compared to the V-1 from Thermaltake we tested a few months ago. This goes to show you that the Orb idea isn’t a bad one, the numbers don’t lie! 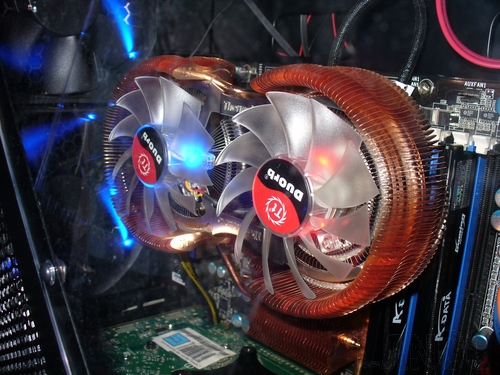 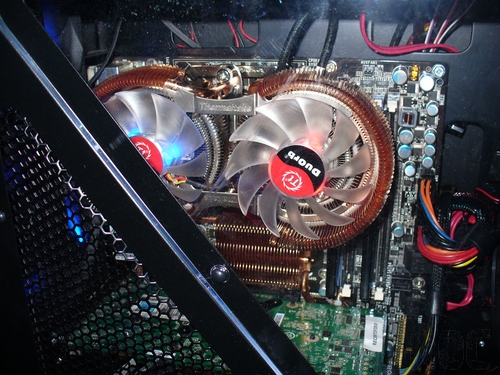 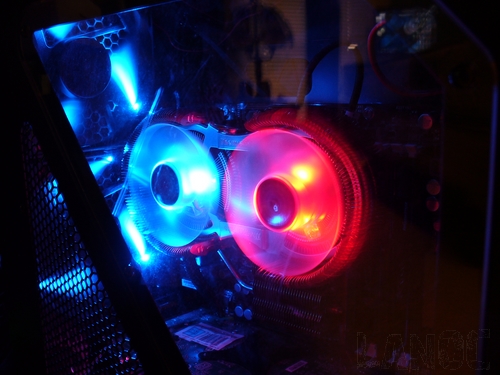 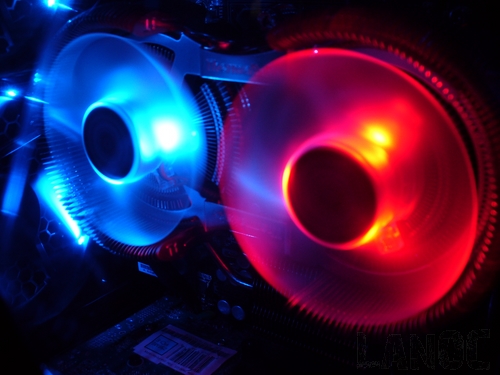 The DuOrb is a good heatsink. Thermaltake is defiantly onto something with the Orb designs. The downside to them is the amount of space needed to house them. Although everything fit fine in our setup, we are using a full tower. People with HTPC’s and mid towers could have major fitment issues if they don’t research properly. Even with that complaint there are going to be times where this heatsink fits better than others because it isn’t as tall as some of the other top performing heatsinks. The installation is similar to other heatsinks that require backplates. During all of the testing I never heard any noise coming from the dual fans. The blue and red color combo is good and bad; some people won’t want to have multiple colors of lighting in their case. But the two colors do look really good together. The performance graph speaks for itself as far as cooling goes. You will end up paying a premium for that performance though. At almost $80 the DuOrb is the most expensive heatsink Thermaltake makes. Infact the price is the main reason this heatsink doesn’t get a higher rating. It is a great performer but that doesn’t always translate to being a value. I recommend this if you are looking for one of the best air cooling solutions, but I would recommend looking at some of Thermaltakes other heatsinks if you want to save a little money and still get good performance. 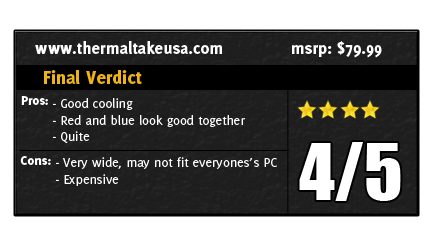 You might call him obsessed or just a hardcore geek. Wes's obsession with gaming hardware and gadgets isn't anything new, he could be found taking things apart even as a child. When not poking around in PC's he can be found playing League of Legends, Awesomenauts, or Civilization 5 or watching a wide variety of TV shows and Movies. A car guy at heart, the same things that draw him into tweaking cars apply when building good looking fast computers. If you are interested in writing for Wes here at LanOC you can reach out to him directly using our contact form.
Discuss this article
Log in to comment
Posts in discussion: Thermaltake DuOrb CPU Heatsink