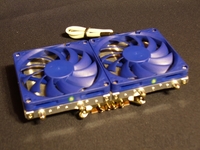 Considering the performance and sound of stock video card coolers it’s amazing that more people don’t buy aftermarket coolers. As we have found out in the past one of the big hurdles is how intimidating and difficult to install they can be. Coolink a Kolink company decided to put there spin on the situation with their GFXChilla. We are going to see how it performs compared to the stock cooler along with the Thermalright HR-03 GT that we tested about a month ago. Considering that we found Coolink because they shared a book with our friends over at Noctua we have high expectations of their products. Click to see how they performed. 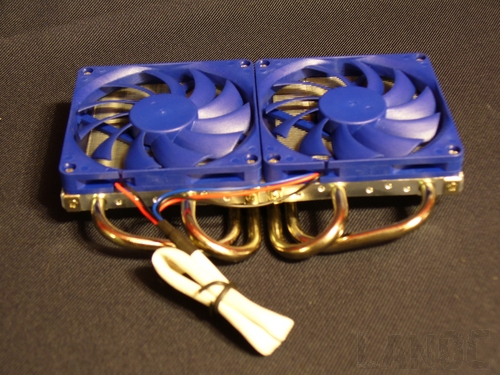 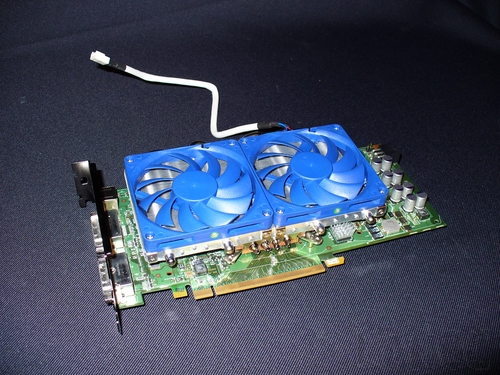 While our packaging did end up a little beat up from the long trip. It’s easy to see that they wanted to catch your eye while it sits on the shelf. The put the focus on the two low profile 80mm fans by having a plastic window on the front of the packaging. The Two fans catch your attention with the deep blue color that Coolink uses in all of their products. Other than the window the front has a very large picture of the four heat pipes. They have three small features listed along with a company logo and a product logo. 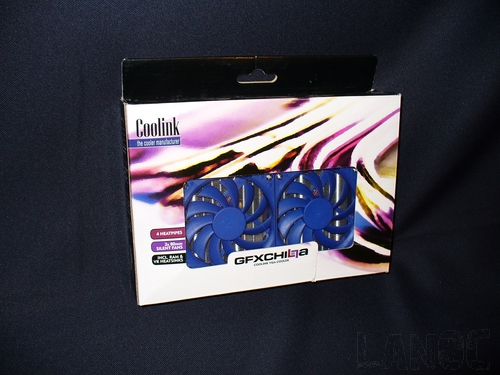 On the back of the packaging they have drawings of the top profile and side profile of the GPU Cooler. They include measurements in the drawings to help you if you’re unsure if it will fit in your case. They have a more detailed feature list on the back. 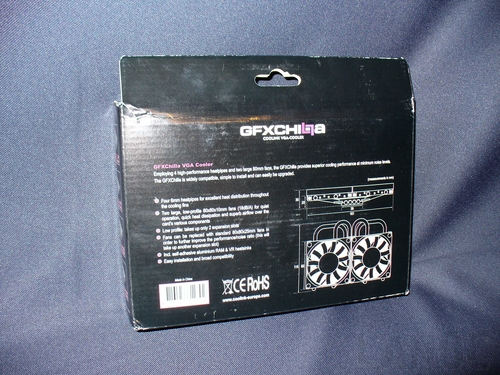 A few interesting notes from the back of the box. I wish they would have a compatibility list on the box. Most people aren’t shopping in store, but if you were you wouldn’t have any idea if it would fit your video card. I also find it intriguing that you can upgrade the fans, in fact Coolink provided us two of their 80mm fans to test this out. 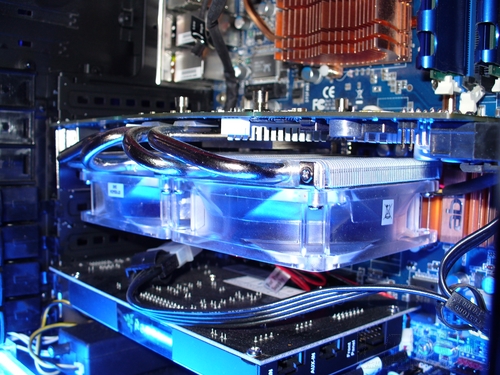 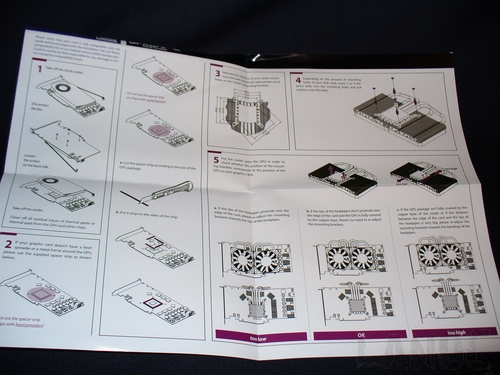 Using our trusty 8800GTS (g92) that we used in the testing of the Thermalright GPU cooler we didn’t have to go through the trouble of removing the stock cooler again. We did have to remove the Thermalright but to prevent damage to the video card we chose to ship over removing the Thermalright ramsinks. They are nearly the same as the Coolink ramsinks. We did reclean and installed heatsinks on the areas we had trouble getting to stick last time. Moving on to the installation Coolink provided amazing instructions. Everything was clearly pictured on what I could almost describe as a installation poster. To keep our testing fair we used the Tuniq TX-2 again during our install. Once we figured out the holes we would have to put the standoffs and installed them we were in the home stretch. After that it was as simple as tightening the four spring loaded screws on the back of the card. This was the point where I noticed how far they screws stood out on the back of the card. I hope they don’t cause any clearance problems in the future. 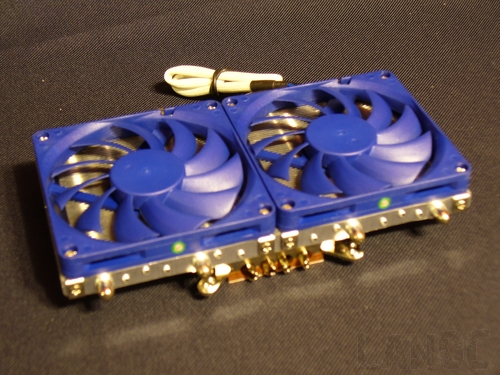 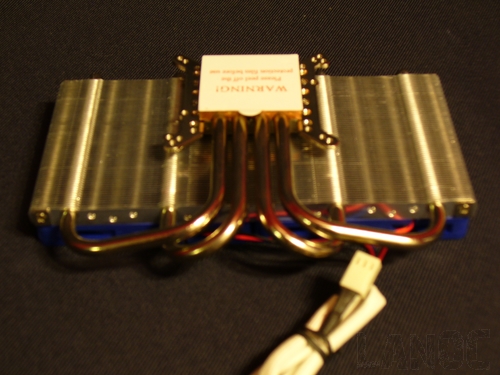 In order to do fair testing between the stock cooler, the Thermalright and the Coolink we stuck with the same testing used in our last test. With the room temp set at a constant 70 degrees we let the pc idle for 10 minutes in order to get our idle temps. After our idle temps were set we ran through 3dmark noting the highest temperature reached. We used EVGA’s Precision Overclocking tool to Overclock as well as to keep an eye on GPU temps. All fans were run as high as they could be run while staying away from unlivable sound levels. With our stock cooler this was at 50% load, all of the others this was 100%. Sound is just as important as performance, what good would it be to have a fast pc if you went deaf in 6 months? 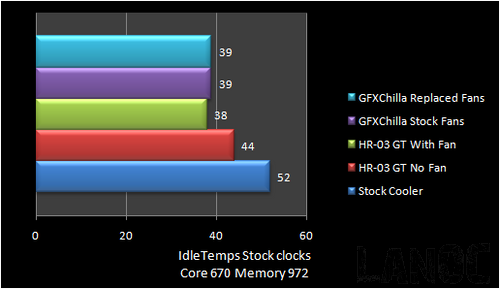 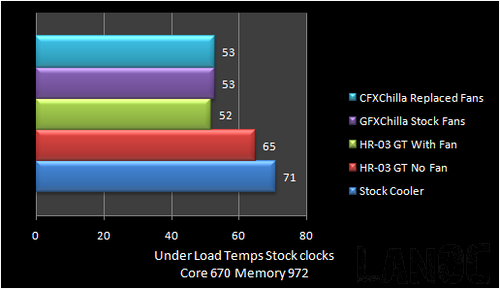 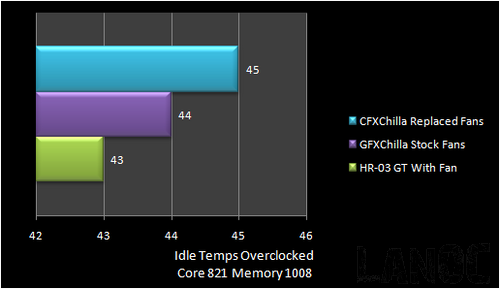 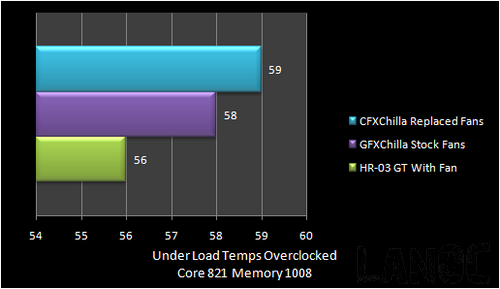 As you can see the GFXChilla performed just under the HR-03 GT with the stock fans on it. We did test it with the provided 80mm fans. Performance went down slightly, I believe this was caused by the fans being thicker and having to pull air off of the top of my sound card. It’s nice to have the option to upgrade the fans but I’m happy with the stock fans. 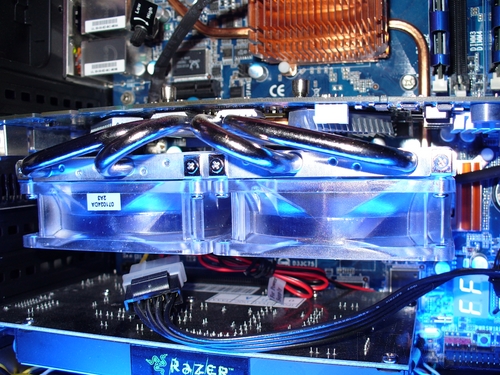 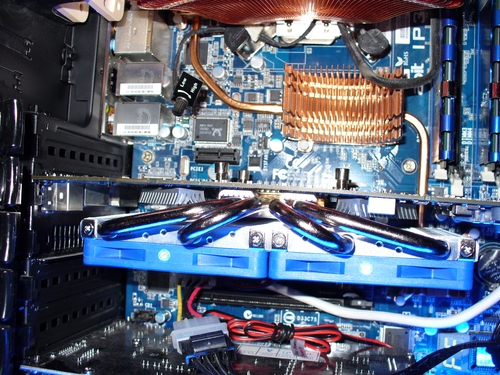 You have a cost effective, compact, good performing VGA cooling solution and you’re still reading this? You should already be ordering it. I highly recommend the GFXChilla to anyone looking to cool off their newer gaming video card while also trying to keep the noise down. It may not perform as well as the HR-03 GT, but it’s not that far off. The installation is also very easy, a major plus to most users. I dont think you could ask for a vga cooler that performs any better for the price they are asking. I hope to get a closer look at more coolink products, they have a nice 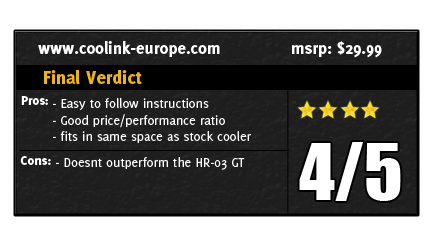 You might call him obsessed or just a hardcore geek. Wes's obsession with gaming hardware and gadgets isn't anything new, he could be found taking things apart even as a child. When not poking around in PC's he can be found playing League of Legends, Awesomenauts, or Civilization 5 or watching a wide variety of TV shows and Movies. A car guy at heart, the same things that draw him into tweaking cars apply when building good looking fast computers. If you are interested in writing for Wes here at LanOC you can reach out to him directly using our contact form.
Discuss this article
Log in to comment
Posts in discussion: Coolink GFXChilla