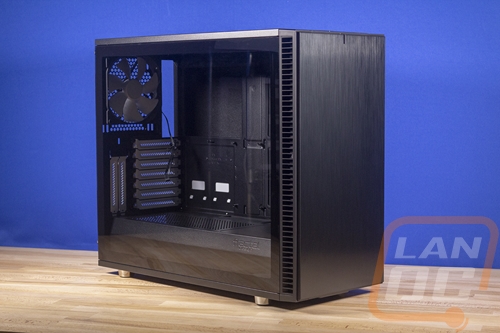 As far as I’m concerned, building a system is a large portion of the overall performance of a case. Of course features and livability are important later on and noise and cooling performance as well. But in my experience what sets cheap cases apart from expensive ones is how easy they are to work in. Anything is a round peg if you hit it hard enough right? So building in the Define S2 I pulled out the components I would put in a case like this. A higher-end platform like the X299 or X399 chipsets. Well, our X299 system was in the middle of video card testing but our older X99 system was available and fit the bill (don’t worry I have Threadripper coming soon!). A new RTX 2080, a 1 TB SSD, and a 1000 watt PSU from Cooler Master rounded everything out.

So you have to pull the entire Define S2 apart to get to the bottom hard drive cage where they have a box with all of the accessories and screws. The box is nice enough to list everything that is inside and their quantities, but I did pull out the bags to take a look as well. The SATA power 3-way extension cable was a surprise addition and then they also included two reservoir brackets as well. Beyond that, all of the normal screws, standoffs, and zip ties were inside. 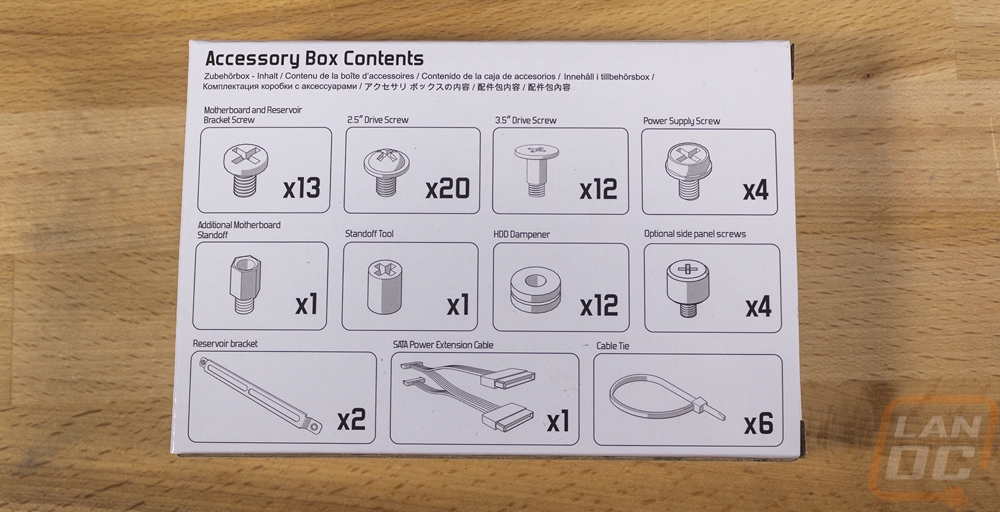 So when I was prepping the case I had to pull the I/O wiring out of the way, this was tied to the case in like 4 different spots. This gave me a minute to check out all of the wires. I like that everything is blacked out to match most of the case. The big surprise here was the new Gen 2 Type-C USB internal header cable. I guess its not a huge shock because I did see the Type-C on the front panel, but while the header has been available on a lot of motherboards I haven’t really seen them in cases yet so I was really happy to see that. Beyond that everything was a rubber cable except the I/O button and lights cable that has everything gathered up with black sleeving. Also to note back here is that the pre-installed fans didn’t come with the wires connected to the fancy controller. It isn’t very hard to do, but don’t forget to hook those up. The front fan cables reached but didn’t really have a lot of extra length. 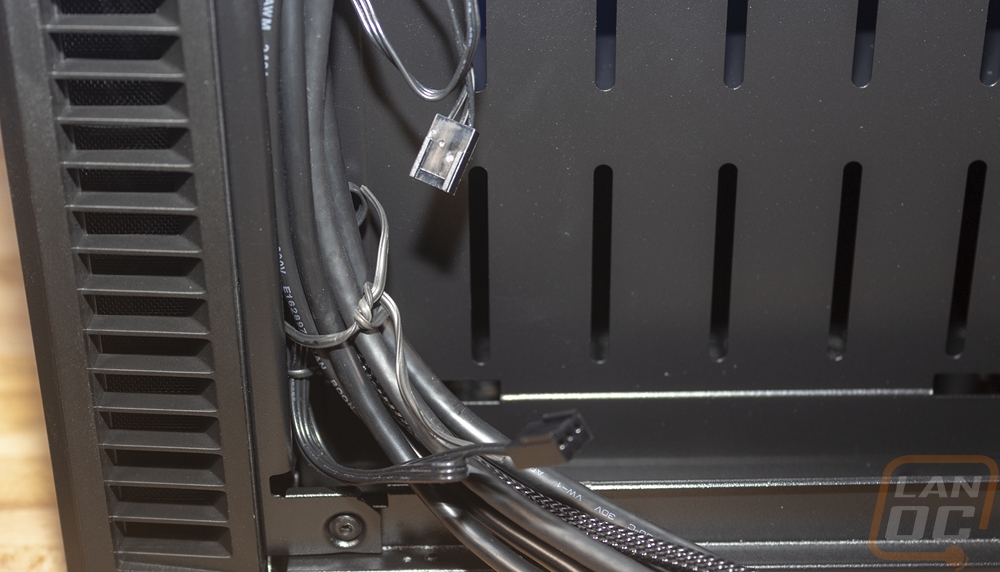 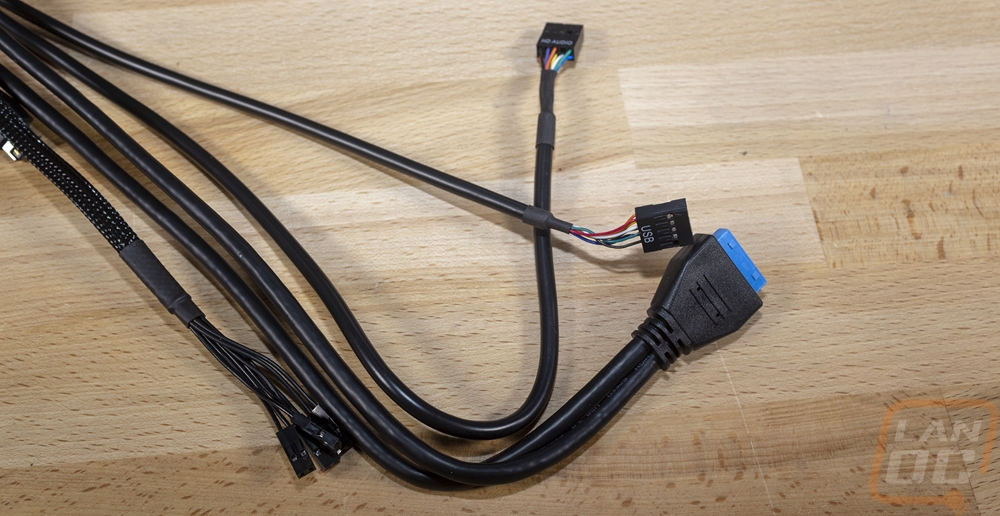 Next, I installed our power supply. Remember you have to pull the bracket off the back, mount it to your PSU, then slide it all in through the back hole. For me, I pre-installed the cables I would need so I had to make sure all of those made it in as well. Then two thumbscrews to tighten it all down.

I slipped in our pre-setup X99 motherboard, CPU, ram, and cooler into the build. I already had this mostly together because it just had come out of our old test bench. But even if you are building your system new, I would recommend getting that all put together outside of the case. Fractal does give you a lot of room in the Define S2, especially with that removable top panel. But it is still easier outside of the case. Do everything except install your water cooling, but install that bracket if you can. Then once you mount the motherboard (trust me it slide right in because there is a lot of room) you can mount your radiator to your preferred location (I would do the top unless sound is your top priority) and install the block to your CPU.

Next, I was running wires up from our PSU through the grommeted holes and into their plugs on the motherboard. Keep in mind how you will clean things up as you do this, specifically run things up that middle track when you can. But don’t tie everything down just yet. 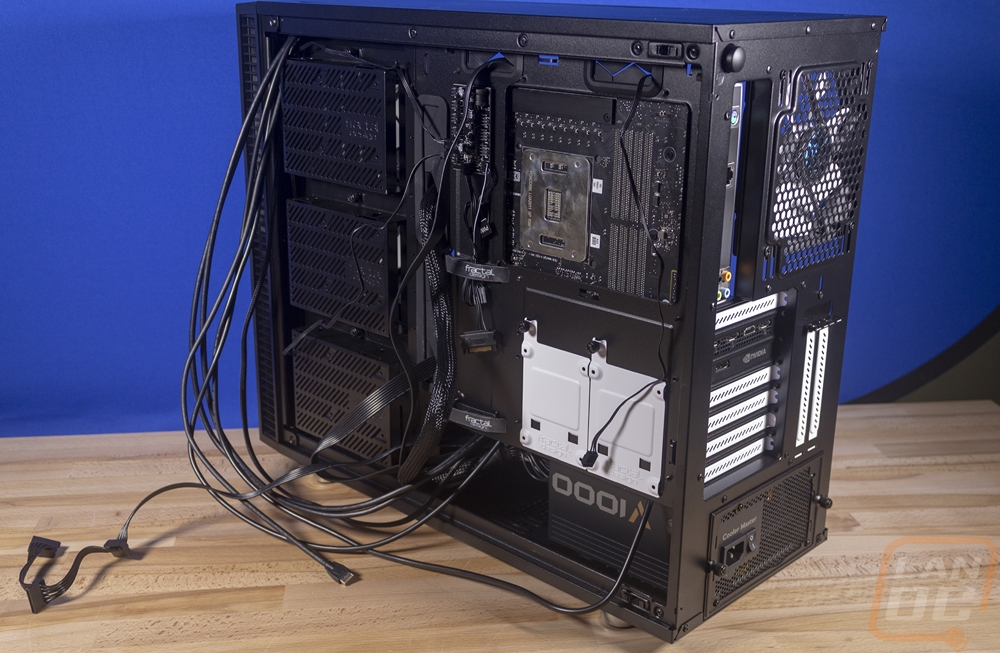 Don’t forget your SSD or hard drive unless you are using an M.2 drive and it is already installed. The brackets in the S2 worked well. One thumbscrew to hold them in place and then four screws to hold the drive. That goes for both the smaller 2.5-inch mounts and the 3.5-inch mounts. 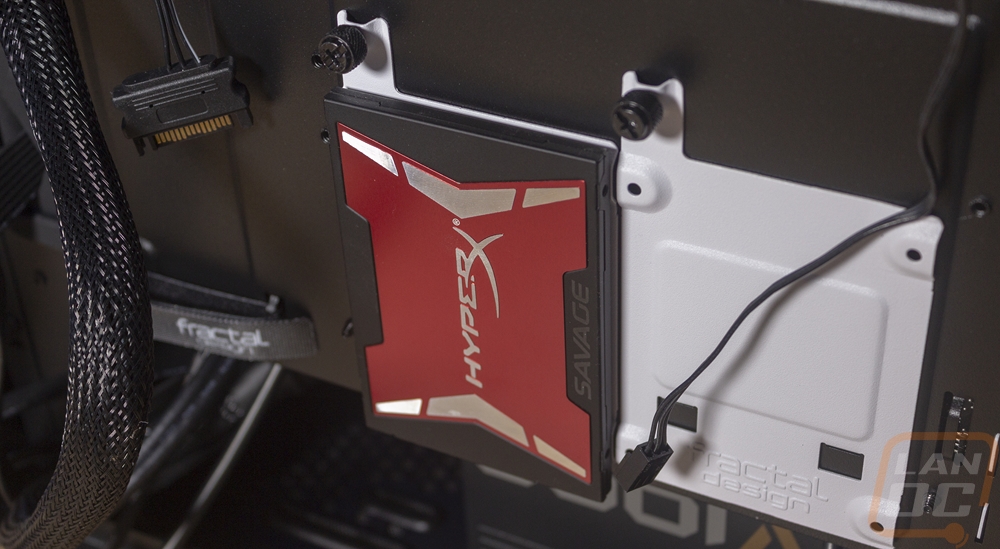 I installed our video card around front and hooked it up then finished up wiring with the front panel wires and hooking up the fans to the controller. The front I/O connections were a little hard to get at, our motherboard was right up to the top of the PSU cover and I have big hands. From there I could finally clean things up a little. I would normally use a lot of zip ties but I was curious if I could get things cleaned up just with the included Velcro straps. Eh, well it doesn’t look great in photos but it did work and cleared the back panel just fine. With zip ties, I could have pulled more wire down into the PSU area to make them look straight going up the track behind the motherboard tray. 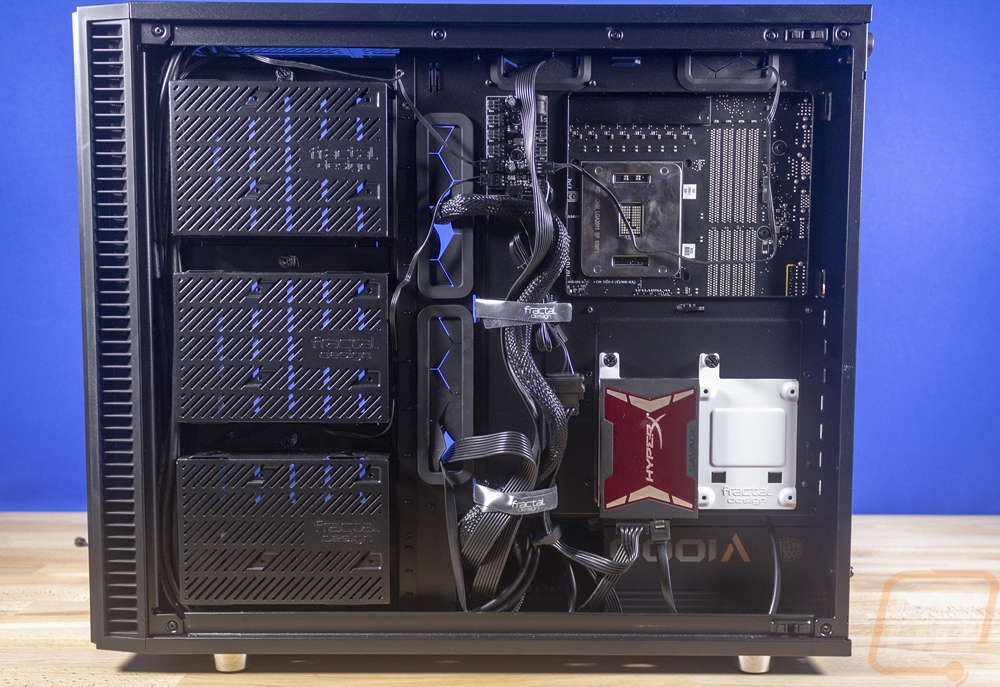 With it all installed, look at just how much room is there to the right for custom water cooling. An AIO would work, but I don’t think most will have tubes long enough to reach the front. More importantly though, it's just not going to fill that space up. I pulled out a new Swiftech radiator, their new textured finish matches this case and you can see even with a radiator on the front and maybe even push-pull you can still fit a tall res and pump. 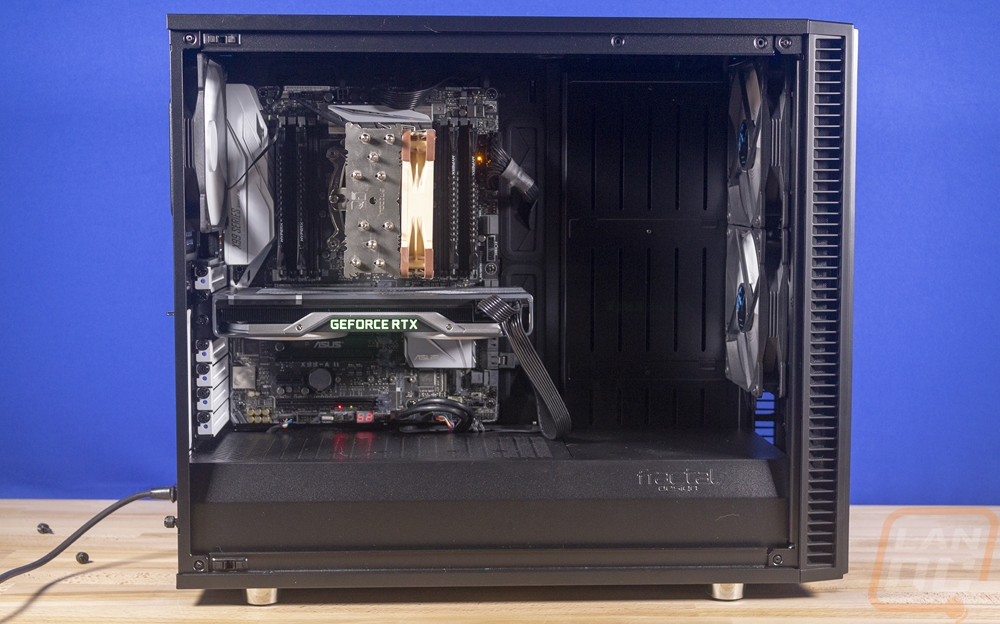 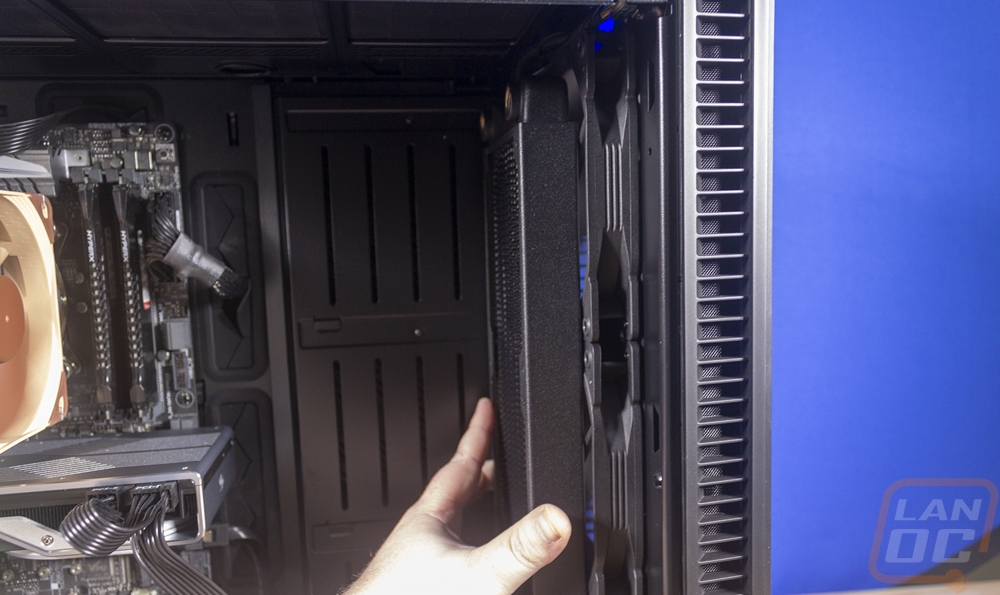 Here is a look at the system altogether. One big thing to note is that there aren’t any flashy lights. Even a few LEDs on our motherboard did nothing to light the Define S2 up. For most people who are interested in this case, I think that will be a big plus. If you want lighting though, you might want to include LEDs for the case on your shopping list as well. The only LED in fact is the slit at the top of the front I/O and the ring around the power button that light up lightly for power and get brighter for hard drive or SSD activity. The light is in blue, but even if that isn’t your color it is very minimal. 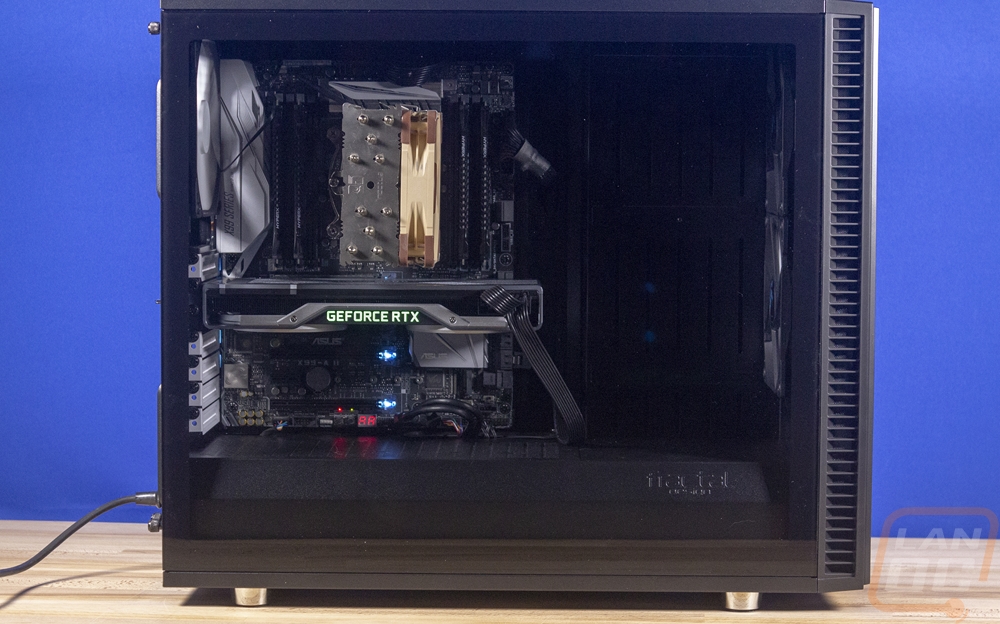 With everything together, I spent some time with the case. There were three areas I wanted to focus on. How is the case to use daily with things like how easy is it to keep clean, is it heavy, any special features? Cooling performance, then sound performance as well. Now cooling performance with three 140mm fans was more than enough to handle our X99 system with an RTX 2080. The front fans pushed fresh cool air in up under the video card where it could pull the air in and the rear fan pushes our warm air out of the case. With vents on the bottom and potentially on top there is enough room for the extra 140mm fans worth of air pressure to find its way out. The Fractal fans did a good job in the noise department. I was going to test with our decibel meter but other PCs in the office were actually causing the ambient noise level to be high enough to not pick them up. I will say that the thick side panel with dampening and the thick glass side panel really help cut down on the in case noise. I could only hear the build when I got close to the sides of the front panel where the ventilation is. Now overall, using the ModuVent design up top and opening up airflow up there would be much better, the front design is restricted, but this would only be a concern for me with a crazier build.

The other performance aspect I wanted to check out was overall livability. The first thing I noticed was just moving the case around. Our simple build came out to be just one ounce less than 37 pounds, add in water cooling especially a custom loop and this is going to be the heaviest thing in your office other than yourself. In other words, this isn’t a case you would want to take to and from LANs, but it is great to setup and leave it in your office. The glass side panel is also going to require a little more cleaning attention for fingerprints and dust. But overall the pull out bottom dust filter and pop off top are easy to clean. Cleaning the front vents requires taking the front panel off, but it comes off quickly.

We have 804 guests and one member online