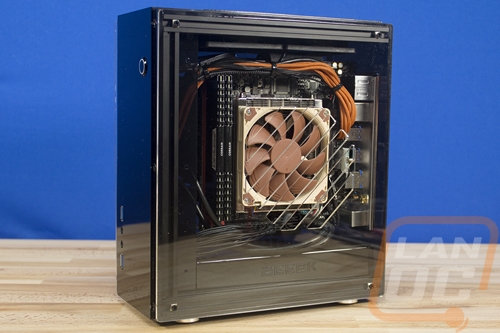 Okay, you might be asking what all can you even look at for performance on a case, especially one as small as the A30. Well, for the most part, a lot of my testing is normally focused on building in the case and how well some functionality works. In this case, I was curious how well it would work for LAN use, especially with an acrylic construction but beyond moving it around the house I haven’t had the chance to get it out to an event. I would be careful when transporting it though, acrylic can crack easily so any big bumps could have you needing a new panel or even worse. So if you plan on traveling with this I would wrap it up in a blanket in the car, if its cold at the event or if you are like me and your wife is always cold you will be set. If you take the A30 on a flight you might want to consider a much more robust way to protect it.

Beyond that, though I was especially curious at how well the two 80mm fans would handle the cooling of a 6 core PC with a dedicated GPU inside. In addition to that, I wanted to check out the noise levels of those fans.

For thermal testing, I ran a few different tests with different workloads. To start I tested with the fan speeds at stock settings and I ran the CPU workload in AID64 and then tracked the CPU Diode temperature as well as the motherboard temps. After a half hour what I ended up with was 60c on the CPU and 46c on the motherboard. That’s not too bad! The CPU load is as close to real-world usage as you can get, but I did also test with the FPU load that is extremely demanding. Here we did cap out to the 75c thermal limit and it dropped the clock speeds down slightly. The motherboard was warmer but at 49c, still not to bad. In other words, this was a limitation of the heatsink, not the case's cooling.

Both tests were done again with both the CPU and case fans cranked up. This did help with the motherboard temperatures overall and in the CPU workload test as well. The FPU workload was still maxed out though.

I did the CPU load combined with the GPU load on the GTX 1060 to get a full case load going. Here the CPU ran a touch warmer at 61c and 48c on the motherboard. The GPU ran nice and cool as it pulls in the cool air right through the side panel on both fans. In the 100% fan speed tests the CPU did run 1 degree higher than it did in the similarly done CPU test. The GPU was able to run a little cooler as well. 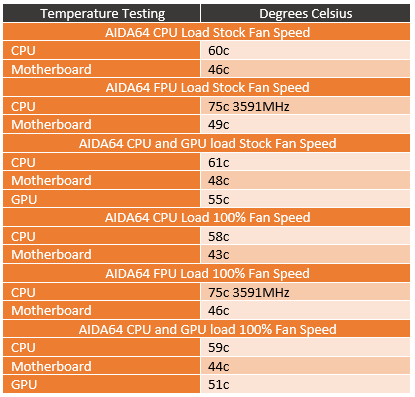 I also went in and got some thermal images of the A30 while doing the GPU and CPU workload. This gives you a better idea of how the case itself is handling the heat. I’ve had some SFF cases where because they are metal they start to absorb and radiate the heat from the CPU and GPU and that didn’t seem to be happening here with the acrylic shell. The intakes on the side panels show us the heat from the CPU and GPU behind them and the top shows how much heat the two 80mm fans were pulling out. The front fan did seem to be getting a little more heat, but nothing to be worried about. 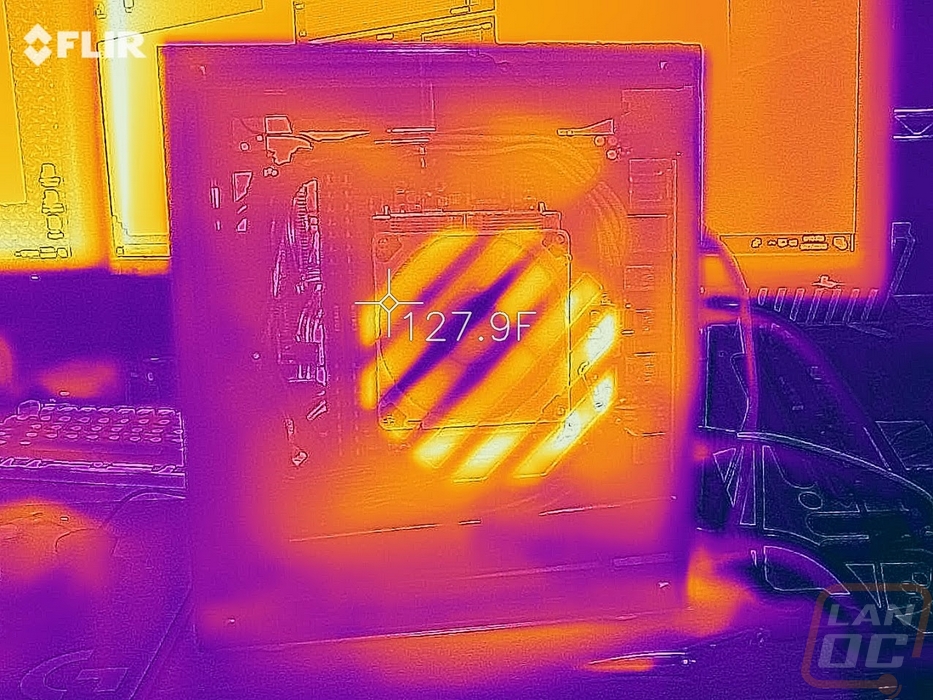 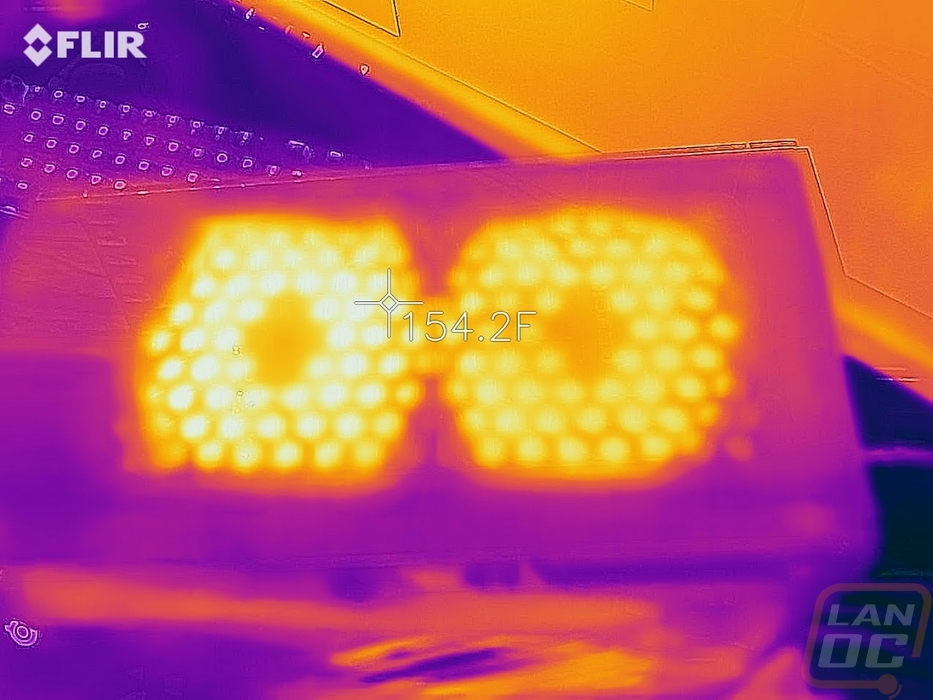 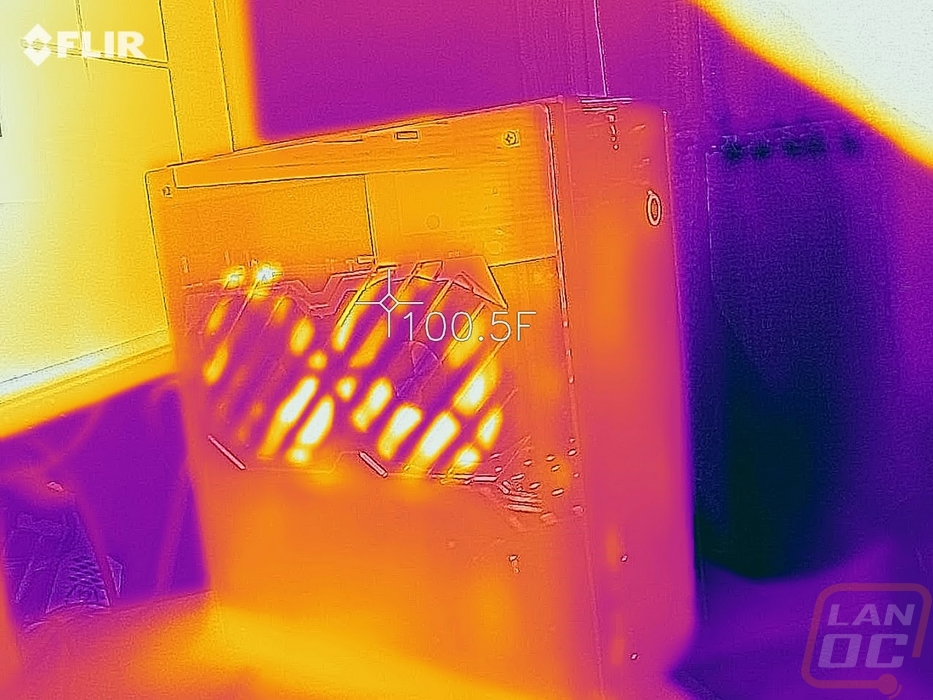 Then my last test was noise testing. Really as far as the case is concerned the two case fan results are the only thing that is important. But I did do the other tests to put the noise in perspective. At 50% the two 80mm fans didn’t do nearly as bad as I had expected. I thought for sure I would need to replace these fans with something quieter later. They do make some noise but only really at 100% fan speed. Even then they weren’t nearly as loud as the GPU fans. That is basically where all of the noise came from in the build when using it.

We have 1116 guests and one member online