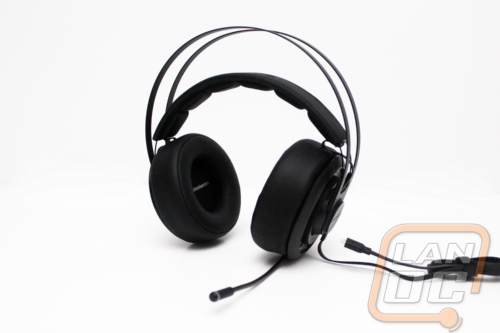 With SteelSeries launching a full audio product lineup today I have a feeling that some people aren’t going to even realize that the Siberia Elite Prisms are a lot more than a renamed Siberia Elite. Frankly to stick with the Prism theme that wouldn’t have had to change anything, because the original Elite has the full color lighting. SteelSeries took the chance to look at the Elite and make a few changes to make their flagship headset more of a proper flagship model. Their original had a few key issues that we along with a lot of their customers ran into. They changed the earcup design to increase comfort, swapped out the microphone with a more flexible model, tuned the USB soundcard, and anodized the arch black for the black model and changed the earcups from white to black on the white model.

So did the changes help? In short yes, very much. The original Siberia Elite has been sitting stored away for months because I wasn’t able to use it over extended periods of time. The Elite Prism though hit the nail on the head and was very comfortable for me. The change to the black arch was great although I think now the black version looks worlds better than the white model because of the earcup change. Just like before, I loved the tangle free cables, they do such a great job that you really don’t notice until you go back to a normal cord. The same goes for the integrated audio and microphone controls, they are great to have right on the earcups.

The Siberia Elite Prism wasn’t perfect though. I did still have some issues with the audio levels for the USB sound card being lower than what I could get through analog. It wasn’t a deal breaker by any means, but it is worth keeping in mind. I also nitpicked a little on the LED colors not really lining up with the colors I selected in the software. I had to use what was basically a red to get a real orange. That is trivial though. Really the only issue I still have is with the overall price. While I think SteelSeries has finally made a headset deserving of its name I do think that the market is going to be a little limited at this price point. People spending this much on audio are few and far between, especially when a lot of gamers are young. Gaming headsets in this price range generally are wireless. 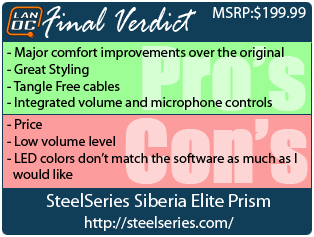 You might call him obsessed or just a hardcore geek. Wes's obsession with gaming hardware and gadgets isn't anything new, he could be found taking things apart even as a child. When not poking around in PC's he can be found playing League of Legends, Awesomenauts, or Civilization 5 or watching a wide variety of TV shows and Movies. A car guy at heart, the same things that draw him into tweaking cars apply when building good looking fast computers. If you are interested in writing for Wes here at LanOC you can reach out to him directly using our contact form.
Discuss this article
Log in to comment
Posts in discussion: SteelSeries Siberia Elite Prism