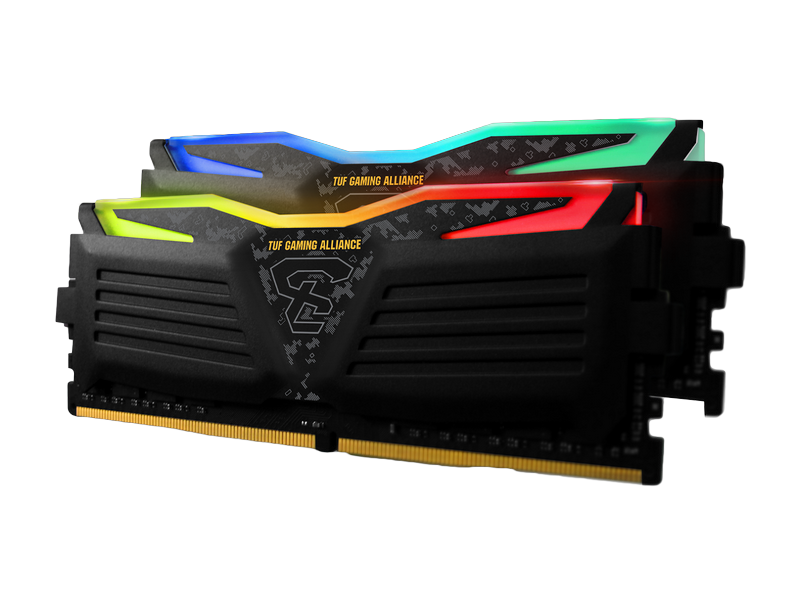 When creating a new product, the GeIL engineers are always thinking “What can we do to make this product better for gamer”.  Features such as “sensational visual effects, wide compatibility, and rock-solid reliability” are the best way to describe GeIL’s TUF Gaming Alliance gaming memory and is an ultimate solution for mainstream gamers, case modders, andbuilders.  A Fancy illumination is a must for the modern gaming system and with more gaming systems featuring tempered glass side panels, it is only natural to add fantastic LED illumination. Motherboard, CPU cooler, case system fan, display card coolers and DRAM module…anything inside the case has RGB illumination and TUF Gaming Alliance gaming memory provides the largest compatibility for gamers and modders when paired with the biggest motherboard RGB fairground: Asus Aura sync and TUF Gaming Alliance.  GeIL promises user a stable and hassle-free RGB memory with Asus RGB motherboards.

Super Luce RGB SYNC Series TUF Gaming Alliance Gaming Memory will be on display and demonstrated at both GeIL’s and Asus’s Booth during Computex Taipei.  The event which runs from Tuesday, June 5th until Friday, June 8th, 2018 takes place at TWTC Nangang Exhibition Hall, booth #I0818. GeIL will showcase its entire line of ground-breaking and unique products. GeIL’s flagship gaming products will steal the spotlight during Computex Taipei 2018.

GeIL – Golden Emperor International Ltd. – one of the world's leading PC components & peripheral manufacturers that concentrate in making the most innovative products, from memory modules to gaming peripherals, for PC enthusiasts worldwide.

Established in 1993, GeIL has soon become one of the most trusted memory professionals in the industry. In the year 2000, with the vast knowledge of tweaking and producing some of the world’s fastest DRAM modules, GeIL shook the PC enthusiast market and changed it for the better. The introduction of the first ever memory heat-spreader, the dual-channel packaged memory kit and lifetime warranty are all innovative concepts GeIL introduced in the PC DIY market. GeIL has been concentrating in perfecting the technologies of IC testing, memory burn-in and quality assurance for memory products across all segments of the market.

GeIL memory is now trusted and distributed in over 50 countries worldwide. In Oct. 2016, GeIL announced to expand the market in North America through a co-operation with Newegg.com to provide customers more purchasing channels and better user experience.