Having had a few Gaming X cards from MSI in over the last two years the RTX 2070 SUPER Gaming X doesn’t immediately look different at all. It is a large card coming in at 297 mm long and 143 mm tall. The Founders Edition 2070 SUPER, for example, was 115.7mm tall and 266mm long. So you can see the Gaming X is larger in both dimensions. It is also a 2.5/3 slot card at 56 mm in width. They end up so tall to pack in the two large fans that the card uses and the length helps keep the fans spaced out where the Gigabyte Windforce cooler uses their unique fan directions to pack the three fans together. The fan shroud for the 2070 SUPER Gaming X is mostly dark grey with an angular design around both fans that is similar to the MercedesBenz Stadium in Atlanta. Each has transparent LED lighting areas around the top and bottom as well. The rest of the fan shroud is black with a heavy texture that almost looks like carbon fiber at first, but it is actually L shapes overlapping each other. 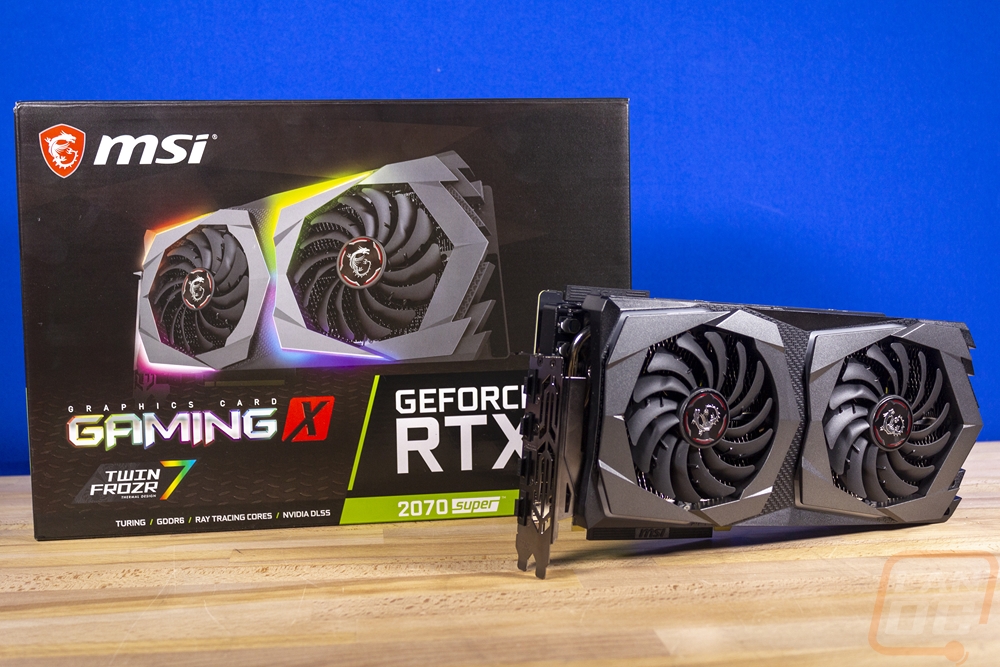 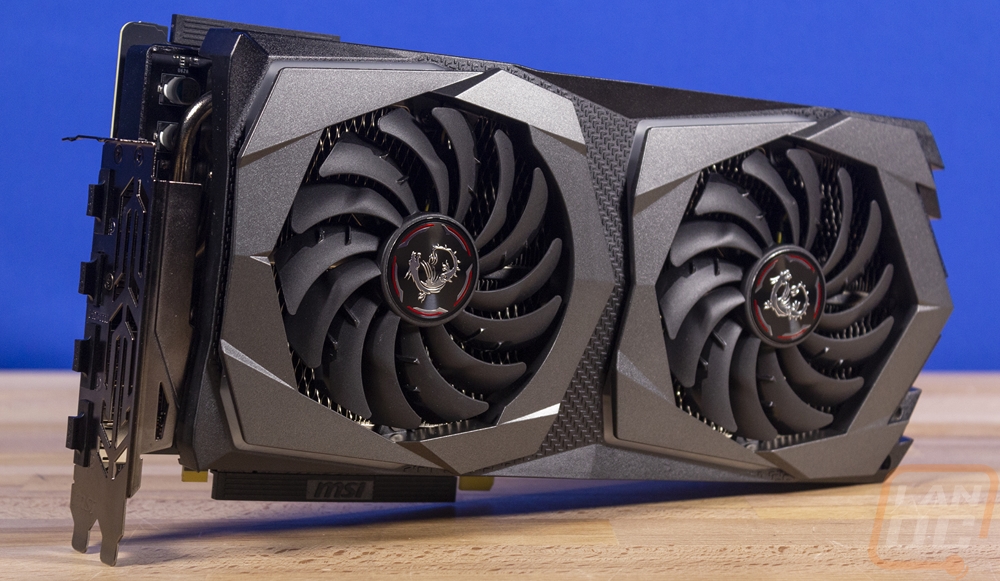 The Torx 3 fans have a dragon symbol inside along with red and which accents. The red seems a little out of place on the otherwise color-neutral card design, but MSI likes their red and their dragons. The fans are axial and have 14 blades with each blade having a heavy twist and every other blade has two small bumps. On the zoomed-in picture, you can see how MSI has layered a ribbed top to their heatsinks which is unique to them and it is a way they help spread the airflow out across the heatsink more evenly. 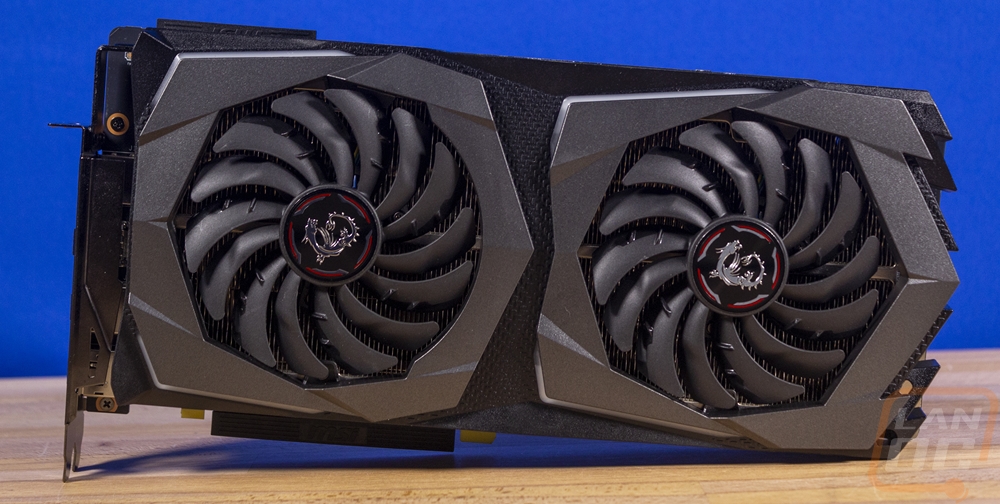 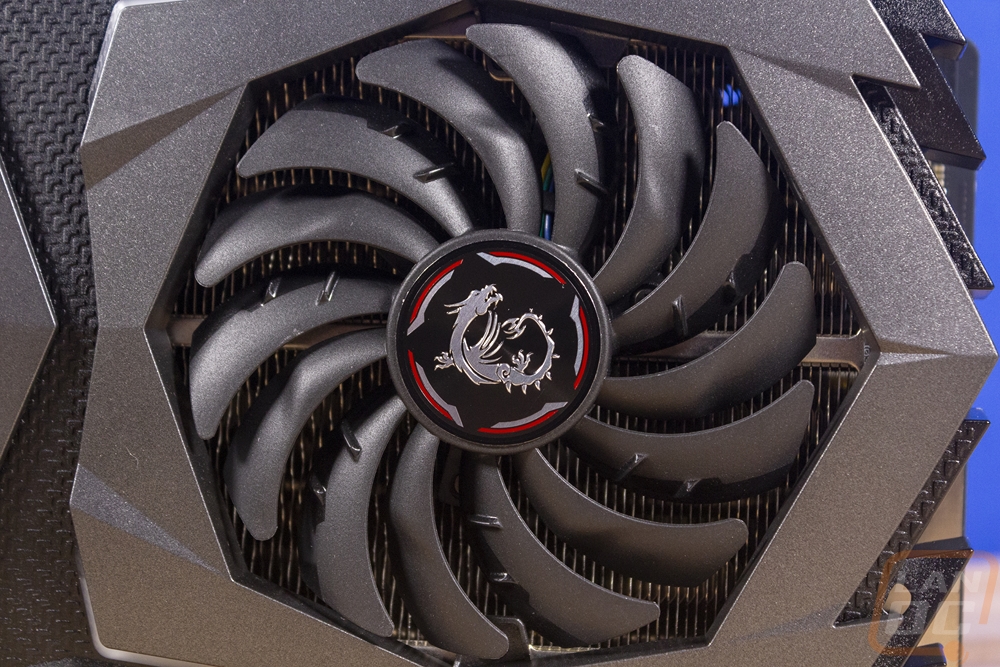 Looking around at the top, bottom, and end edges of the Gaming X you can get a better idea of what the Twin Frozr 7 cooler has going on as well. MSI has the cooling split up into two main heatsink sections and both are tied together with heatpipes. This includes five heatpipes that run over to the end of the card from the GPU and then two that stay on the GPU side of the card. The heatsink has contact points for the VRMs as well as the memory and you can see that it isn’t a fully universal design like some companies like to do, it does cut down in around plugs and caps to get as much cooler capacity as possible.

Up on the top edge of the card, there are a few things going on. For starters the Gaming X required an 8-pin and a 6-pin connection which is the same as the Founders Edition, only because this is a custom PCB MSI pushed both connections up against each other. Nvidia’s Founders Edition design had two 8-pin plugs with the second having two plugs filled because it used the same PCB as the RTX 2080. The power connections are stepped down close to the normal PCI height and also flipped around backward with the clips on the PCB side to allow for the heatsink to be tight up against them. MSI installed these lower because of the height of the card, if they put the plugs at the full card height there would be big fitment issues in a lot of cases. As it sits the card is tall but they also take advantage of the space normally only used by the cables.

The top of the card also has a backlight MSI logo along with a dragon and the Twin Frozr 7 branding. MSI uses this on all of their Gaming X cards and I’ve talked about it a lot. For one I don’t really like backlit branding on hardware, it ends up making your PC look like times square. MSI at least has RGB lighting on this card beyond the logo so you can turn it off and still have some nice lighting. Beyond that, the white section stands out and looks a little weird on the otherwise dark card. Then, of course, there is the red slipped in as well.

Up near the PCI bracket, MSI did include the NVLink connection. You will want to make sure you have a matching card. With this being a custom PCB and a tall card, no other cards are going to work by default and I don’t think there are flexible NVLink connections like there used to be with SLI. That said the NVLink connection was an addition to the 2070 SUPER as a whole, the normal RTX 2070 didn’t have them. They were added simply because Nvidia stepped up to the RTX 2080 PCB for the SUPER.

The back of the Gaming X has a full coverage backplate and a solid one at that. This is a thick brushed aluminum backplate in a mid-grey finish. It has the same hockey stick looking accents cut into it that MSI has used on all of their Gaming X cards for ventilation for the back of the PCB. It also has the MSI logo and the MSI Gaming logo facing the correct way for them to be readable when installed in a traditional case. The backplate does notch down when going around the power connections on the end and the NVLink plug at the front, but beyond that the rest of the PCB is covered and protected. 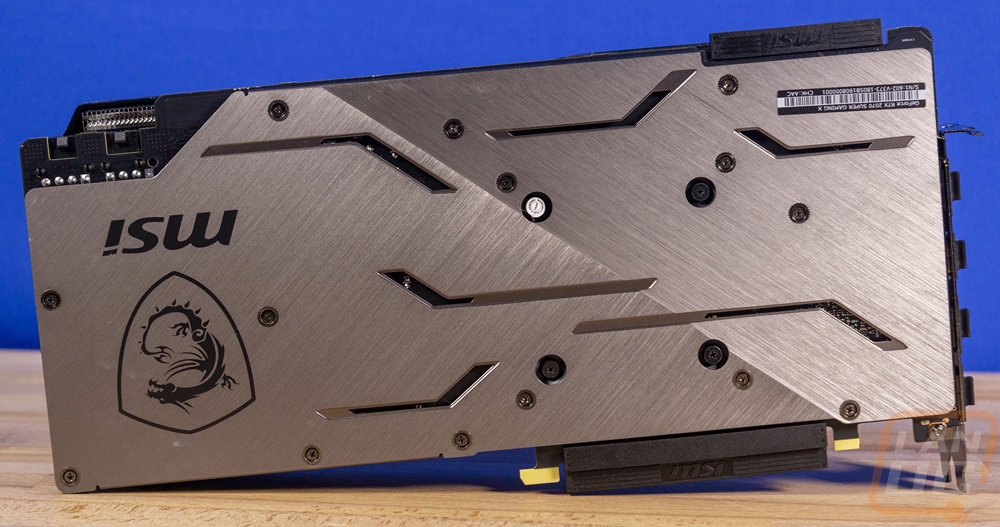 For display connections I was a little surprised MSI didn’t include the full setup that the Founders Edition came with. The Gaming X does have a full row with three DisplayPort connections and one HDMI mixed in as well. But I like seeing the Type-C included as well. It is nice to have an extra full Gen 2 speed Type-C connection for one. But I also want to see the Virtuallink port to take off, allowing easy VR headset connections with power, data, and display all in one plug. Not having to use a box with a mess of cables like you do right now.

Before getting into testing I also hooked the Gaming X up to check out the lighting. The light bars around both fans light up with individual RGB LEDs for a really nice effect. Then up on the top edge, the MSI badge in white is backlit with lighting as well. It is all controllable with software. Overall I would say that MSI gets the lighting really right on the Gaming X. It isn’t crazy or overdone like a lot of the high-end cards and they don’t just add a basic backlit logo as well to make sure to have RGB listed as a feature. The lighting adds to the look of the card but isn’t THE look of the card.

We have 1374 guests and no members online