With product reviewing, we tend to cover a product and then move on, not really revisiting it unless a competing product comes out or the next generation comes out. Most of the time this is fine, things don’t change that much. But in the world of video cards, drivers play a big role and over time performance can improve or get worse. XFX sent over their RX 480 8GB Hard Swap XXX Edition video card mostly to use it with their swappable LED fans that I will be covering soon. But while I had the card I thought it would be a good excuse to revisit the RX 480 and see how it’s doing. Typically AMD drivers don’t have the performance early on, but age well and give improvements later on and I’ve been hearing that it may have overtaken the GTX 1060 in some games. So today let's check out the card and see how it stands now.

So just to be sure that your card has the same specifications as XFX has listed I always get a GPUz image. With that, we can see that it is running at the 1288 MHz that they have advertised. This also lets you get a look at the firmware version and driver version tested with as well. 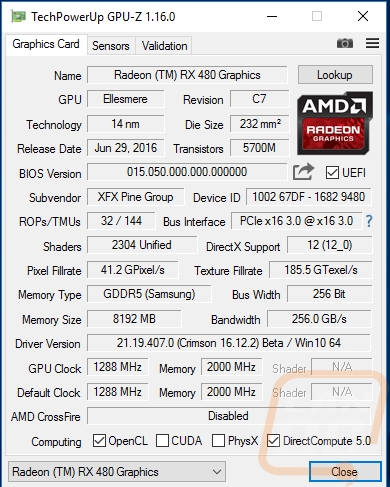 We have 1245 guests and one member online