Not everyone is looking to spend $500 on their video card, in some cases that is the total budget for a build. When you are up against a wall trying to pack the best performance you can get into a budget build you still want to get the most performance you can out of your video card. That’s where cards like the XFX R7750 Black Edition Double Dissipation come into play. XFX has taken the styling and cooling from their high end cards and combined it with the price of budget cards like the HD 7750. Today we are going to take a look at how those two things do combined in XFX’s  R7750 Black Edition Double Dissipation.

All of the XFX cards we have looked at to date have had the same packaging. For the first time the packaging has changed around slightly, specifically the size of the box this time around is considerably smaller. The designs drawn on the box are the same as before though, meaning it still looks like what you would expect from an XFX video card. Along the bottom they have placed a sticker with all of the cards details and model information, in this case this is where we would see that along with being a double dissipation model this is also a black edition overclocked version. 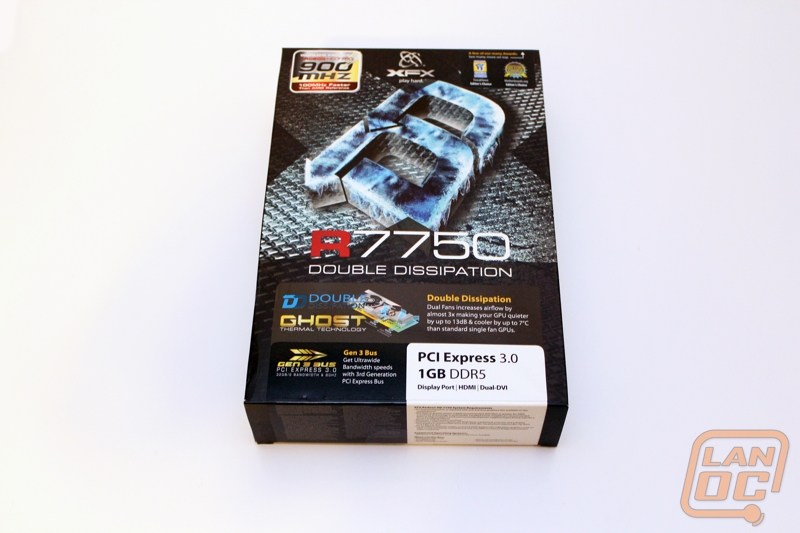 Around back XFX has broken down some of the cards details, mostly details specific to the ADM 7000 series as a whole as well as the double dissipation cooling. Up top we can also see a couple of the LanOC awards along with awards from a few other review websites. 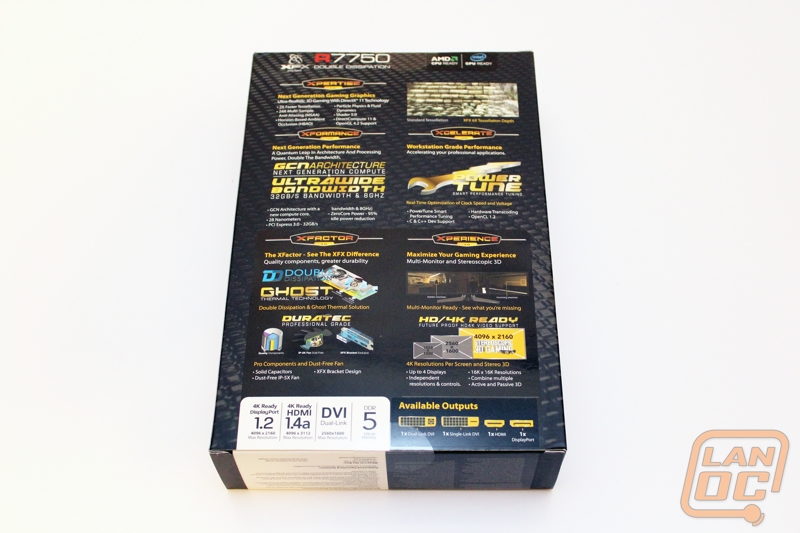 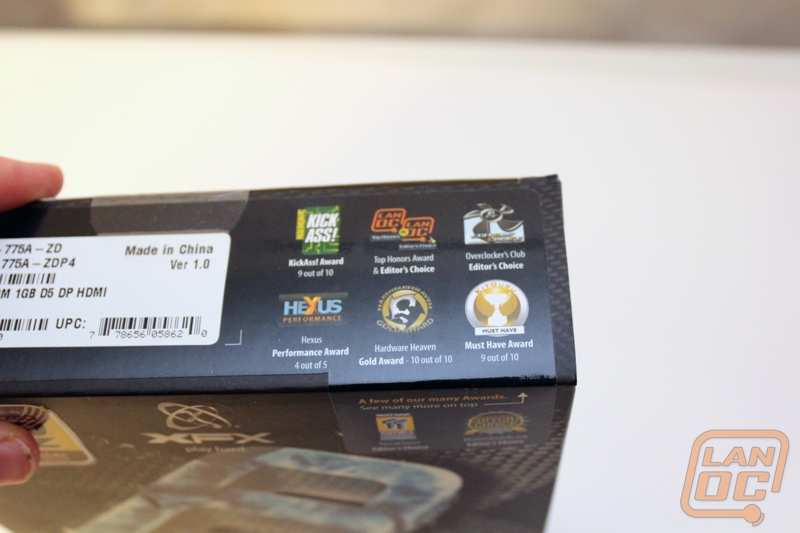 Inside the install guide, driver CD, and information on other XFX products are all sitting inside the box when you open it. They also included the do not disturb door hanger with your cards serial number on it for easy tech support that we always love. Under everything the card is wrapped up in a static protectant bag along with plastic protective coatings on the cards heatsink to prevent any scratches or finger prints before it gets to you. 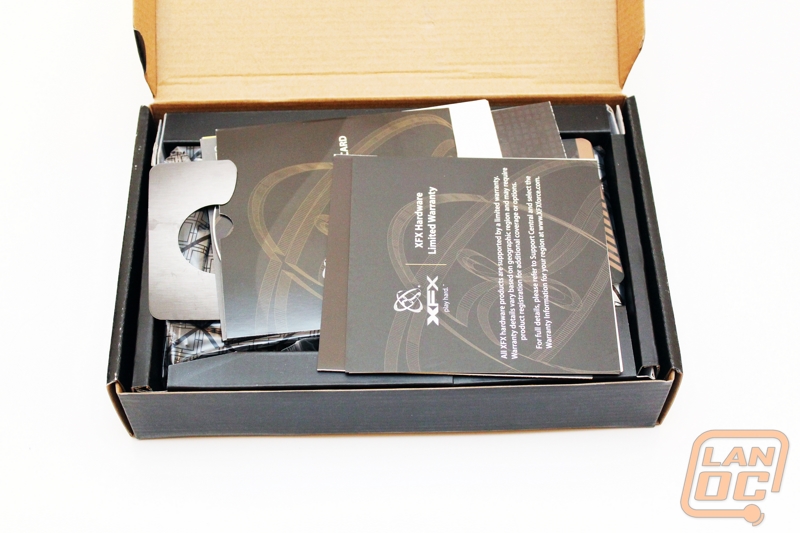 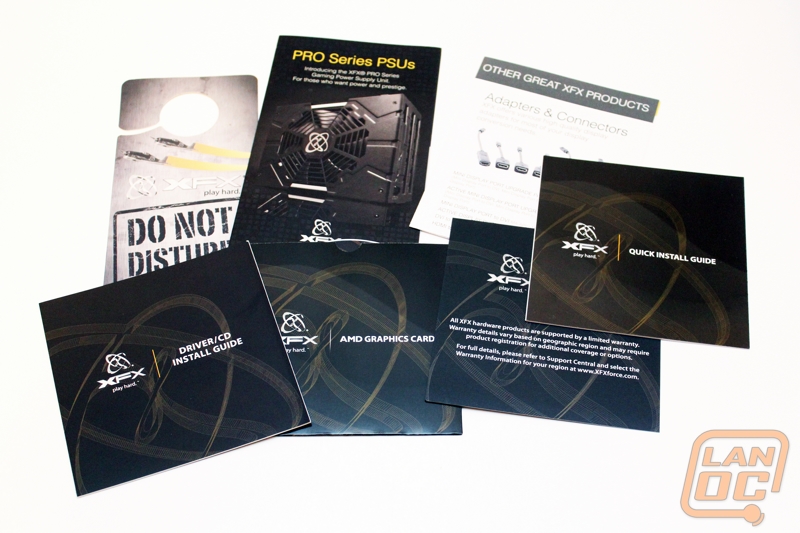 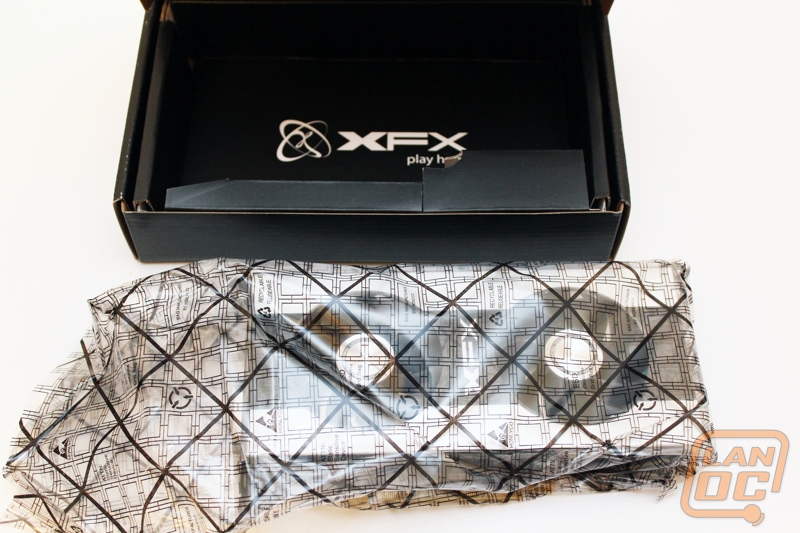 If it wasn’t for the R7750 logo on the top of this card it would be really easy to think this was the R7770. In fact in some ways it is. Unlike the reference HD 7750 this card is longer and is on the same PCB that the HD 7770 uses. To go along with that the card has a 6 pin power connection where the reference HD 7750 doesn’t have one. All of this is to give the R7750 more power to be able to overclock making this a potential hidden gem. You are paying the price of the HD 7750 but you are getting more than what the competition is putting with their HD 7750’s. 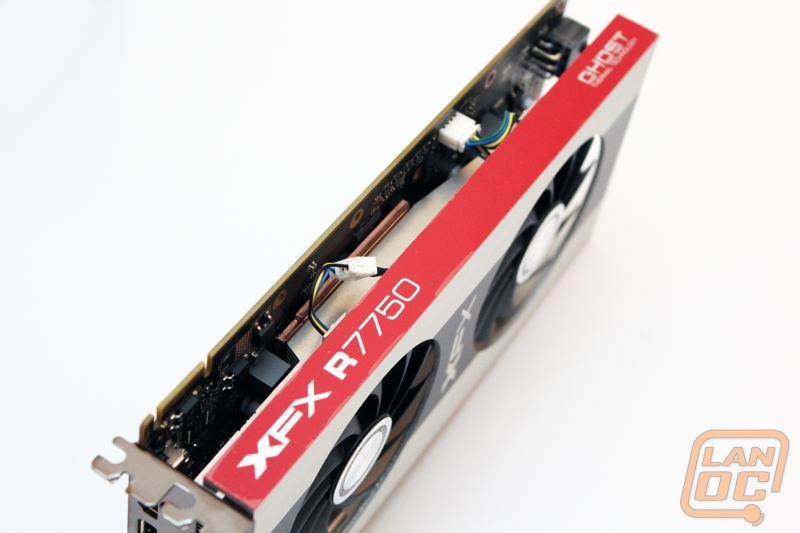 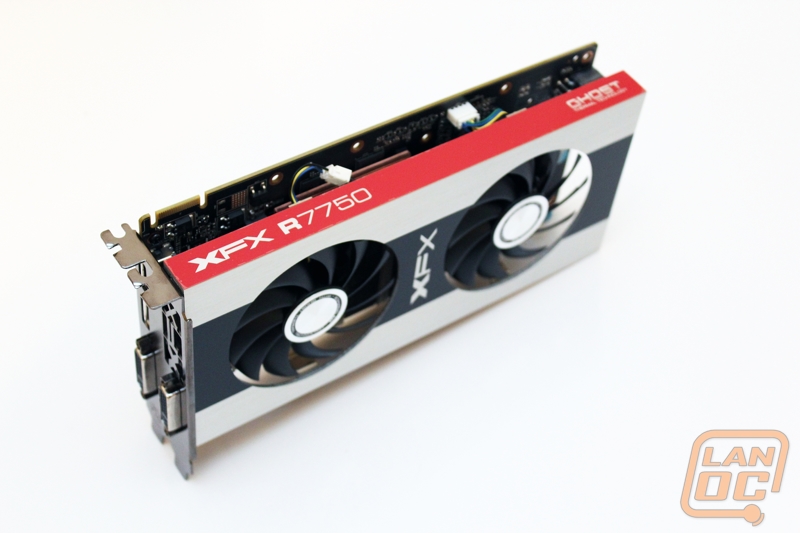 Just like the R7770 that we looked at before, this card has XFX’s Double Dissipation cooling. That means you have an all-aluminum fan shroud around two cooling fans. 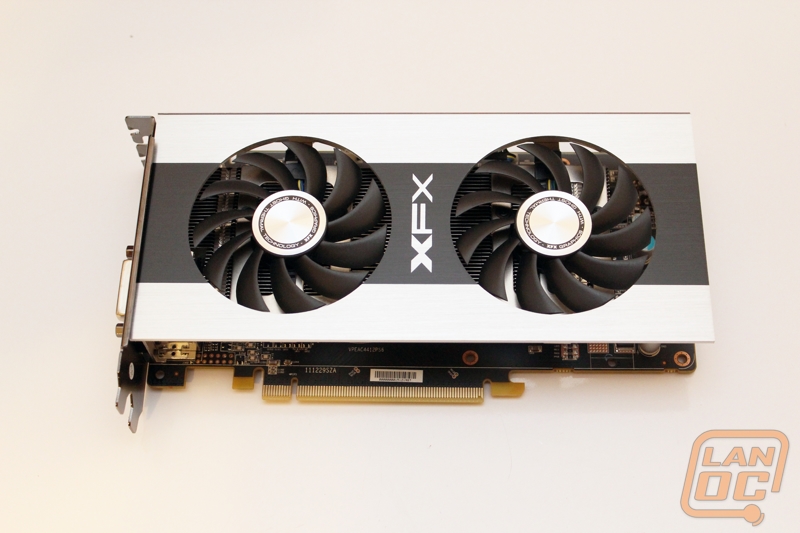 As mentioned before, here is the 6 pin power connector. 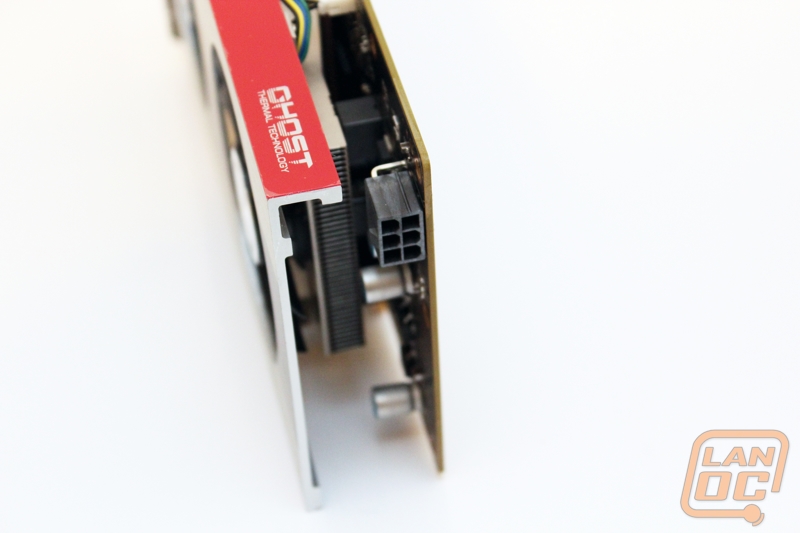 XFX went all out with a full black PCB on this card. Combined with the all-aluminum fan shroud and red trip this is a very stylish card! 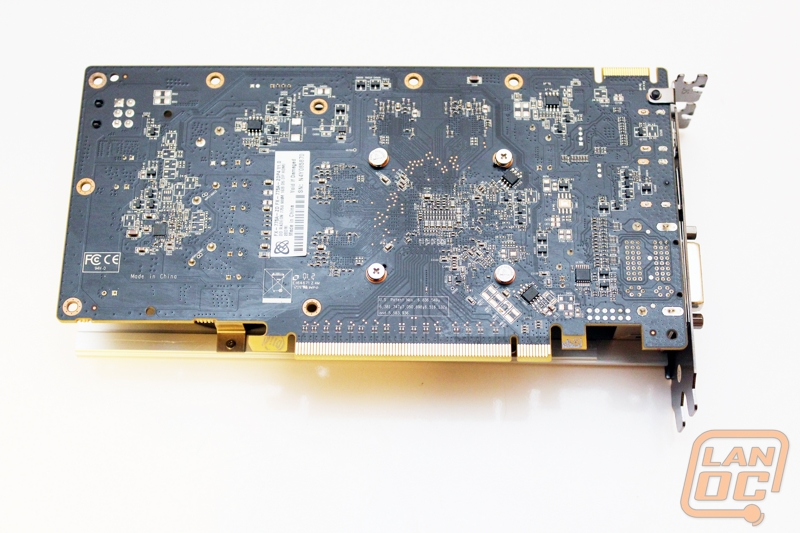 Unlike the reference design you get two DVI ports on the R7750 as well as a full sized HDMI and full sized Displayport connection. It’s a nice touch that the XFX logo is cut out of the cooling vents as well. 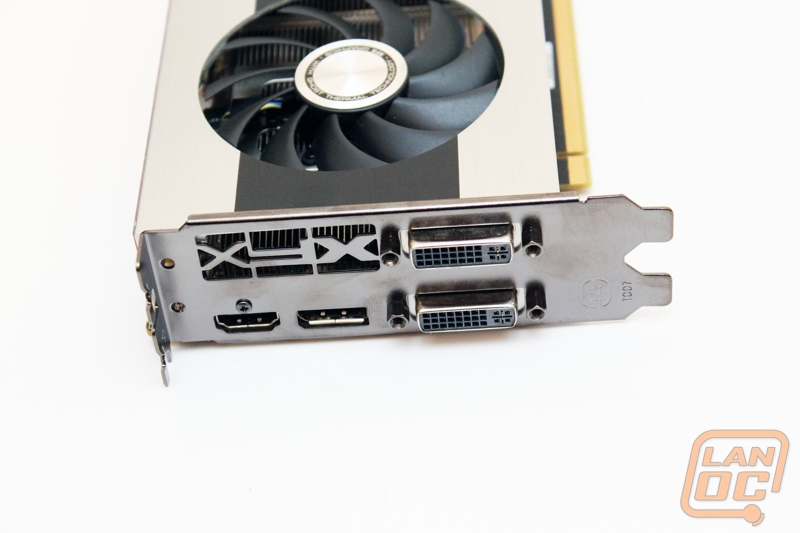 XFX has put a big focus on their Double Dissipation cooling on all of the HD 7000 series video cards and when compared to stock cooling we have normally seen good results. We put every card that comes into the office under load and measure both its cooling performance as well as its noise output under this load. As always we went to FurMark for these results. FurMark puts such an unnatural load on all cards that you know that the results we see here are higher than anything it will do in game. Consider it a worst case scenario. 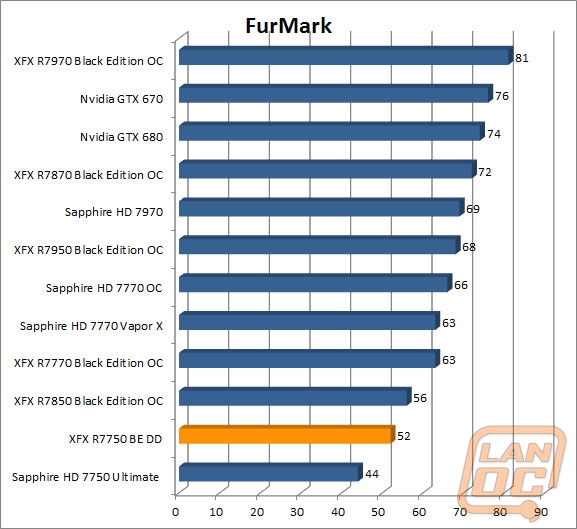 As you can see in the chart above, although the R7750 did a good job keeping things cool the silent Sapphire card did outperform. This is due partly to the R7750’s overclock but considering it has two fans to the Sapphire cards zero fans I would have like to of seen a little better. Of course the size of the Sapphire HD 7750 Ultimate’s heatsink would most likely keep just about anything cool.

Although it give you no idea what to expect for actual in game performance, there is still no better way to compare performance from card to card than 3DMark. In our case we run both 3DMark Vantage and 3DMark 11, on top of that each is run in performance then again on high/extreme. I really wasn’t sure what to expect with the R7750 other than slightly better numbers than what we saw with our last HD 7750. As you can see below that is about what happened. The interesting thing is that the R7750 stayed in line with the performance we saw on the HD 6770 and just above the HD 5770. After two generations the HD *700 performance is still nearly the same. Of course with the introductions of 6800 and 7800 series cards to fill in the gap the price/performance of these cards has gotten even better.

Between increased performance from updated drivers in Crysis 2 and the overclock we saw a nice jump in performance over the HD 7750 in all of our in game testing. All of our testing is done with all of the settings of each game turned all the way up and there are a few situations where we only saw around 30 FPS average, but considering this cards price point that is much better than what you would have been able to get a year and two years ago. There are lots of games tested that have well over the 60 FPS sweet spot in performance meaning this budget card can play some of today’s games at their highest settings. Of course if you are looking to play Battlefield 3, expect to have to adjust the settings to be able to get playable frame rates. 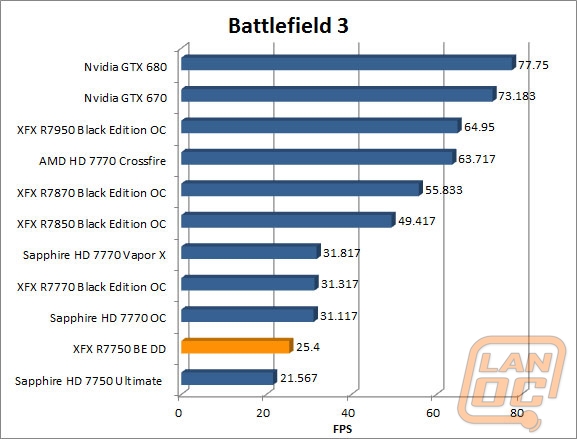 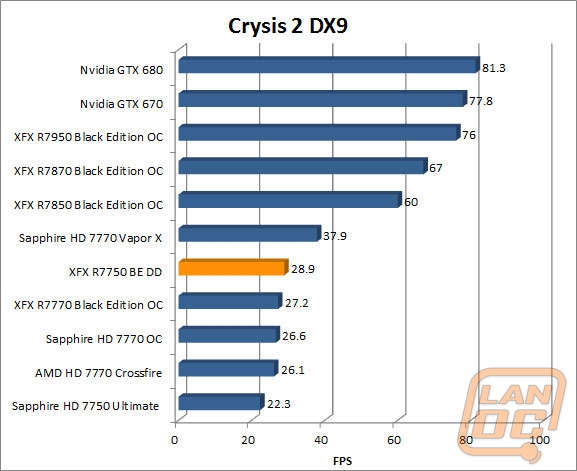 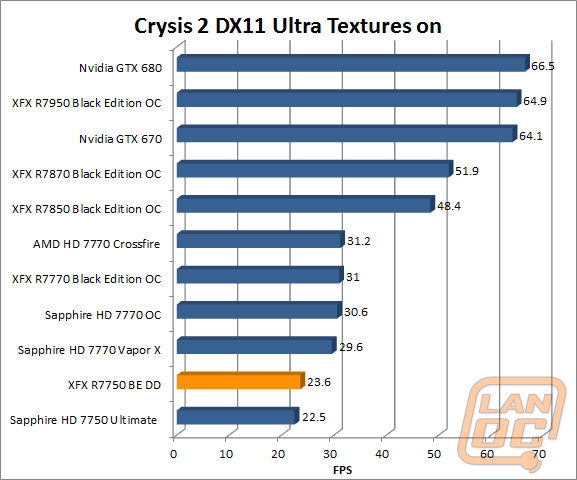 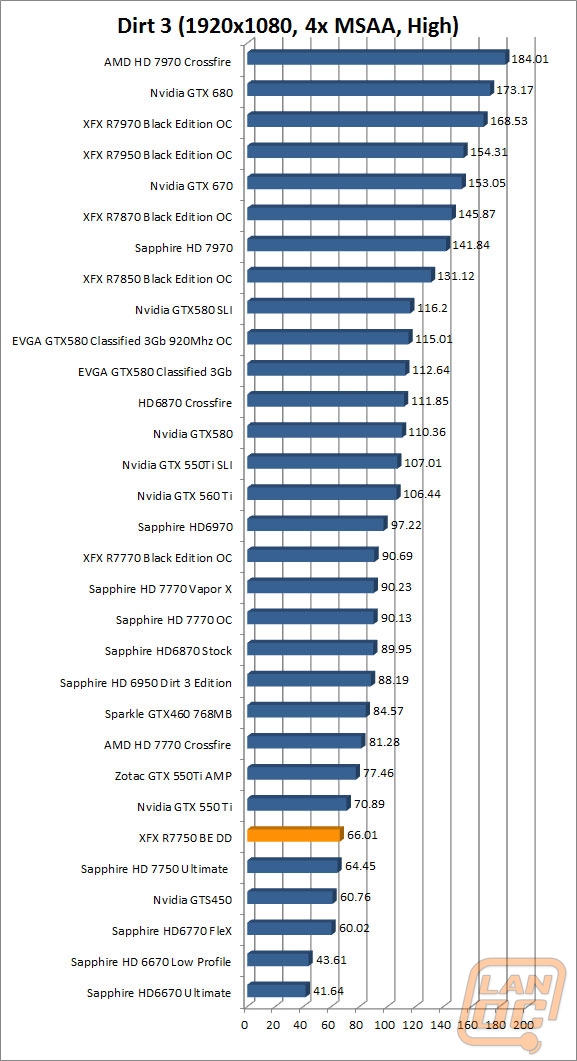 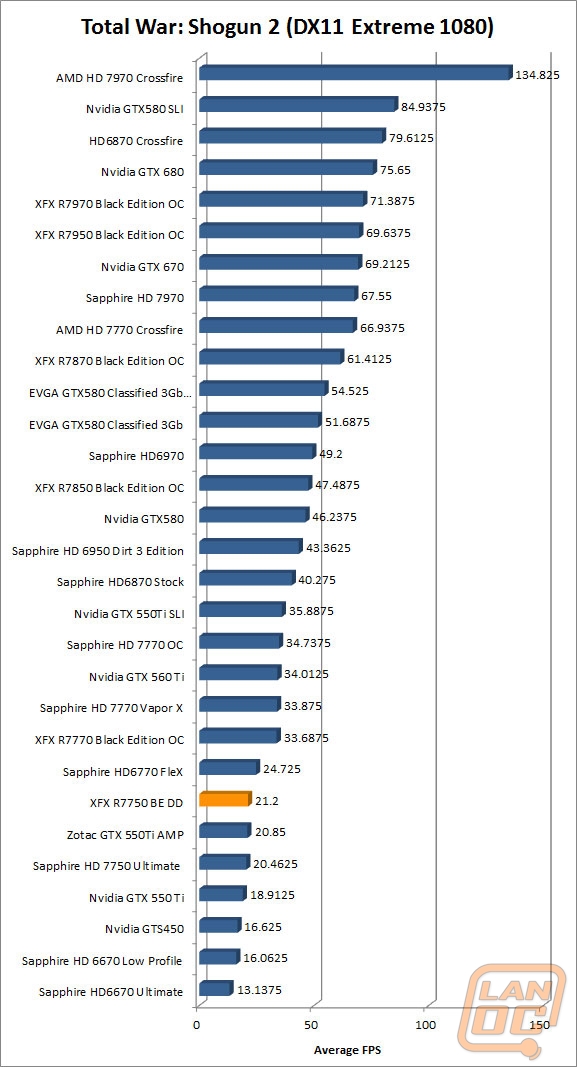 The XFX R7750 Double Dissipation Black Edition falls into an interesting area. You are obviously not paying for a high end card, but we were surprised to find out that you can still expect to play most of today’s games on their highest settings. Playing games like Battlefield that require a lot of processing power will mean you have to turn the settings down a little bit. But for some people you aren’t looking for top performance, or in a lot of cases you are looking for the best performance that you can afford in your budget. With this being the Double Dissipation Black Edition not only do you get a very long name, but you are also getting XFX’s all aluminum fan shroud, a 100 Mhz (12.5%) jump in performance, and two cooling fans. My only problem with this card isn’t even with this card at all; it’s priced very close to low end versions of the HD 7770 that has even better performance. Of course going that route you won’t end up with all of the features of the XFX cards or their kick ass styling. 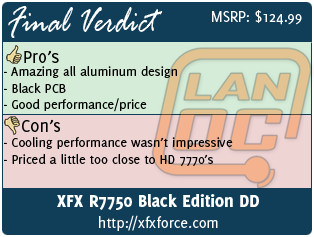 You might call him obsessed or just a hardcore geek. Wes's obsession with gaming hardware and gadgets isn't anything new, he could be found taking things apart even as a child. When not poking around in PC's he can be found playing League of Legends, Awesomenauts, or Civilization 5 or watching a wide variety of TV shows and Movies. A car guy at heart, the same things that draw him into tweaking cars apply when building good looking fast computers. If you are interested in writing for Wes here at LanOC you can reach out to him directly using our contact form.
Discuss this article
Log in to comment
Posts in discussion: XFX R7750 Black Edition DD

We have 1071 guests and one member online