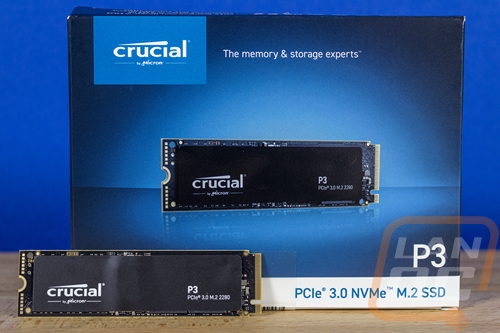 Before getting into testing the Crucial P3 I did check the drive out using CrystalDiskInfo just to confirm that it was connected using the correct interface. The drive runs on PCIe 3.0 and needs 4 lanes to get the best possible performance and we were connected and running at that. I also like to do this to document the firmware revision we are running on for testing because those do change from time to time which we are on P9CR30A which is similar in number to the P3 Plus which was running P9CR409 but with the P3 having 3 and the P3 Plus having 4 in the firmware there. 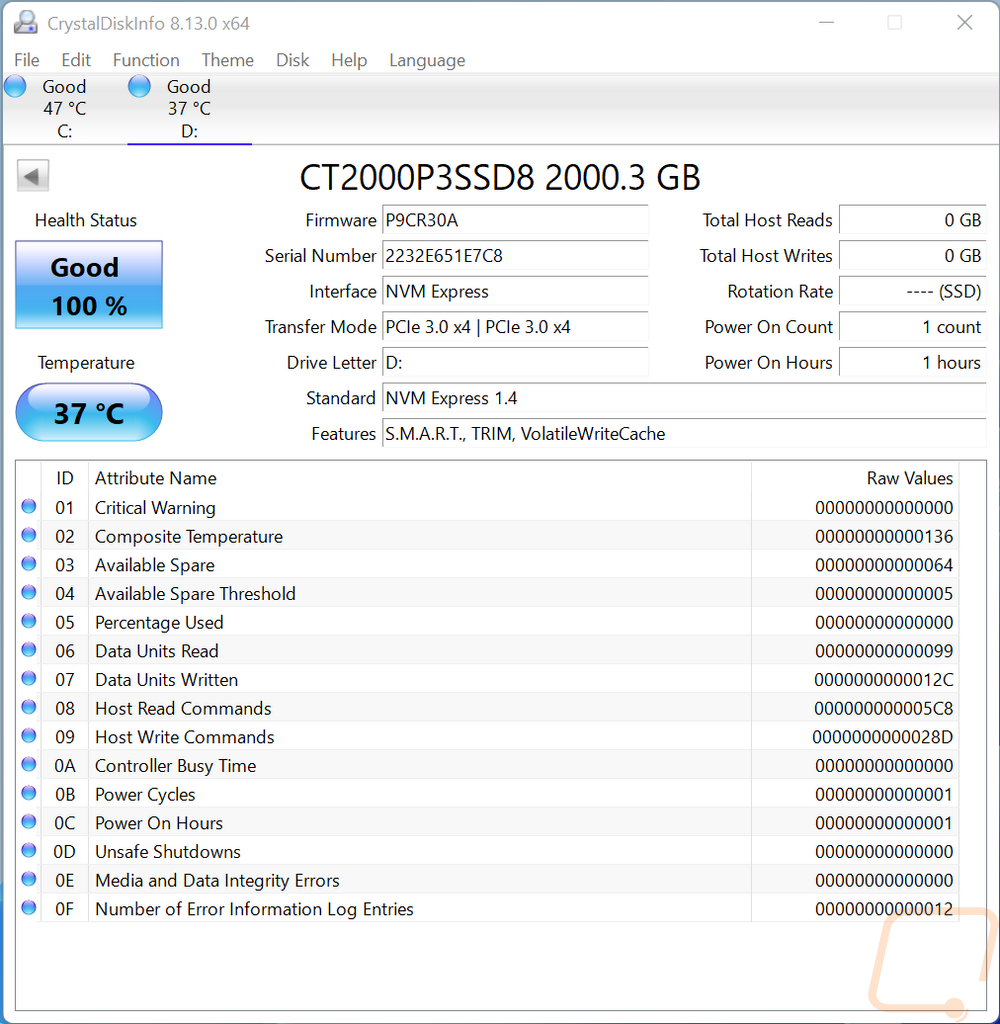 My first round of testing was to run the Crucial P3 through Crystal Disk Mark 8. Sequential testing is usually a best-case scenario and is what companies use for their specifications and on the front of the box to advertise drive speeds which in the case of the Crucial P3 the box didn’t have the drive speed listed but the specifications do and those say the P3 should see up to 3500 MB/s for its reads and 3000 MB/s for its writes. Below I have the drives labeled in orange if they are PCIe 4.0 and blue for older 3.0 drives for reference. The P3 was just over its listed read speed and had a little extra performance on its listed write speeds with 3511 MB/s and 3244 MB/s.

While testing in CrystalDiskMark 8 I did also check out the drive’s IOPS performance with the random 4k queue depth of 32 and 1 thread results. I stacked the read and write performance together here because I do believe that the overall drive performance is important, not just one result or the other. The P3 was the slowest drive tested with its combined results, its read performance wasn’t too bad but it struggled with tie write IOPS which is interesting because the P3 Plus did well with its write IOPS here. 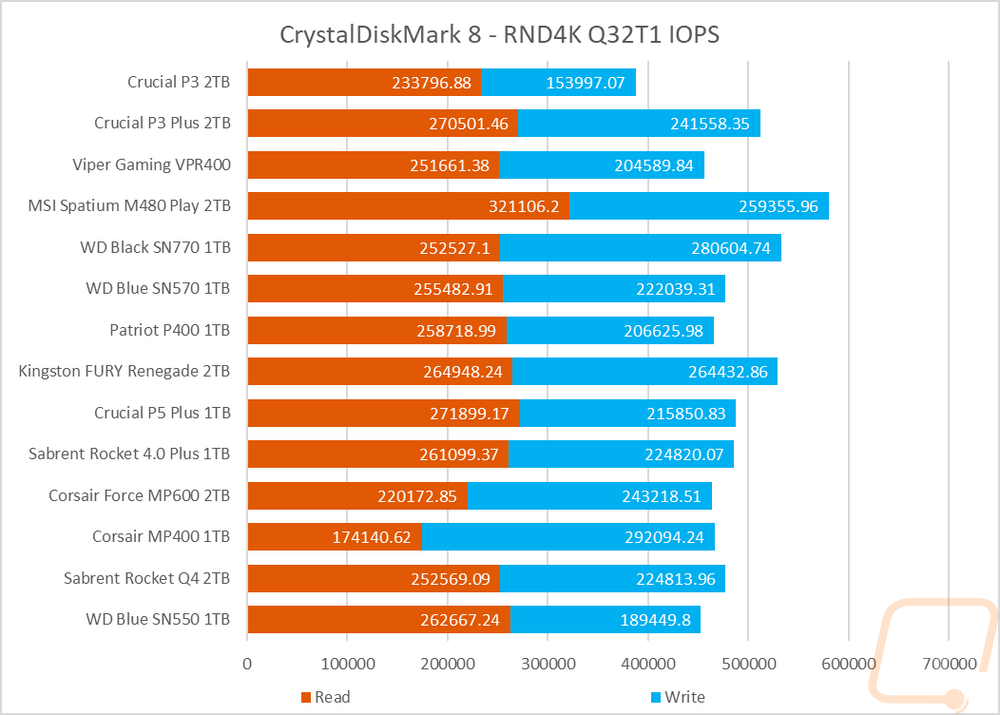 In AS SSD I skipped over the standard test because it is very similar to the CrystalDiskMark tests I prefer to check out one of its sub-tests, the copy benchmark. This moves three files, one that is an ISO, one that is a program, and then a game and times how long each takes. With these being timed, lower is better here. I have all three results stacked to see which drives are best overall. The P3 Plus struggled on this one and the P3 came in just a hair worse with two out of the three tests a few tenths slower. The ISO performance was still good but the program and game file types did poorly. 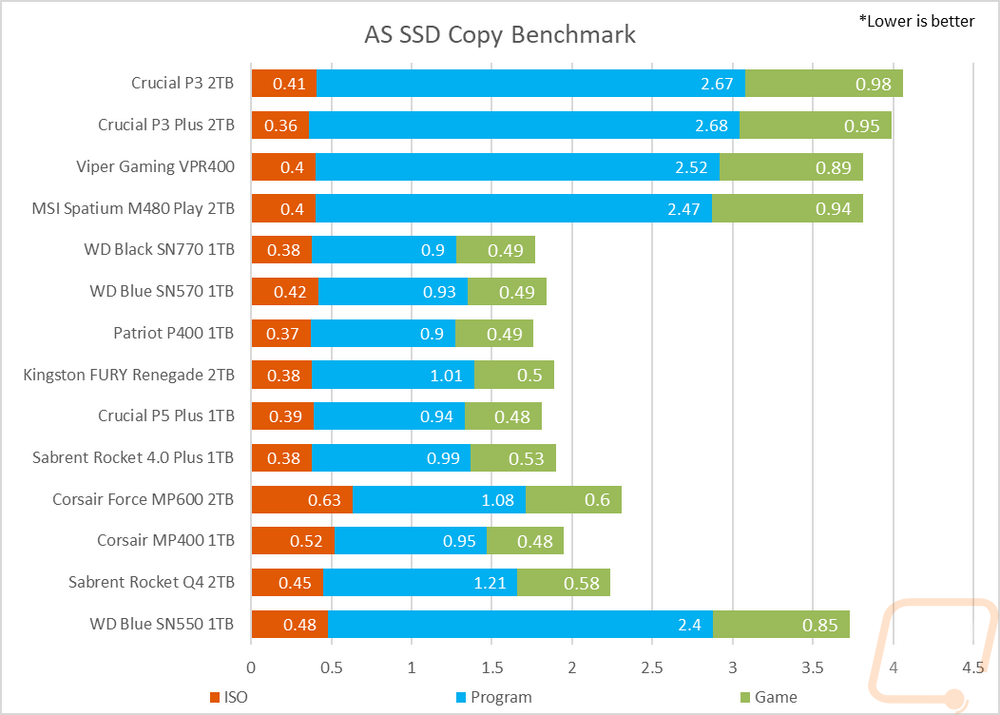 Next up with PassMark Performance Test 10 I ran their combined synthetic benchmark to get a look at their DiskMark rating. The P3 did better than the other PCIe 3.0 drives here and came close to the Rocket Q4 in performance. 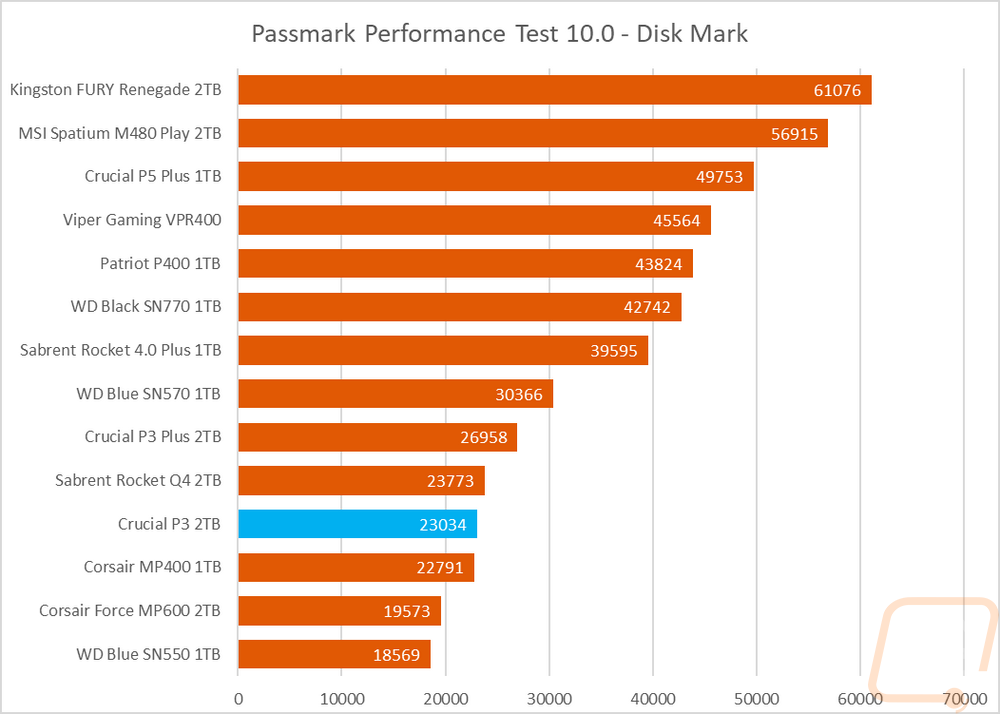 I then changed my focus back over to IOPS performance and ran the Viper Gaming VPR400 in Anvil’s Storage Benchmark focusing on the 4k queue depth of 16 results from the main test. The read IOPS for the P3 were a little behind the P3 Plus which puts them a little behind the middle of the pack and then for write IOPS the P3 did great compared to the other PCIe 3.0 drives. So well in fact that the overall combined result was out ahead of a lot of the PCIe 4.0 drives as well. 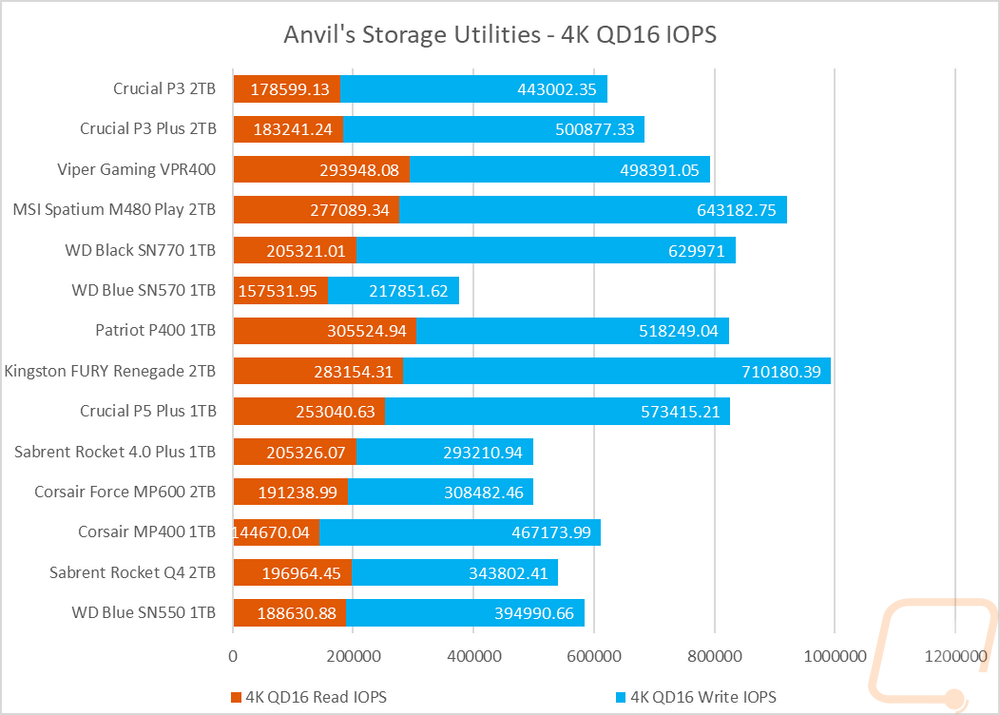 Sticking with Anvil’s Storage Utilities I did a few more tests. Here I wanted to check out how the drive would react to different queue depths so with the file size set to 4K I ran tests ramping up double each time starting at 1 and up to 128 for reads and 64 for writes. This lets us see if the controller gets overloaded. For the read, queue depth tests the P3 matches the P3 Plus nearly perfectly where it runs with the middle of the pack drives up until a queue depth of 64 where it jumps up in performance. For the write queue depth test the P3 and the P3 Plus mirror each other again but for this test, the P3 is consistently around 100 MB/s slower. This means while it is in the middle of the pack performance wise it is way out ahead of the other PCIe 3.0 drives and it does still drop off for the 64 queue depth test just like the P3 Plus. 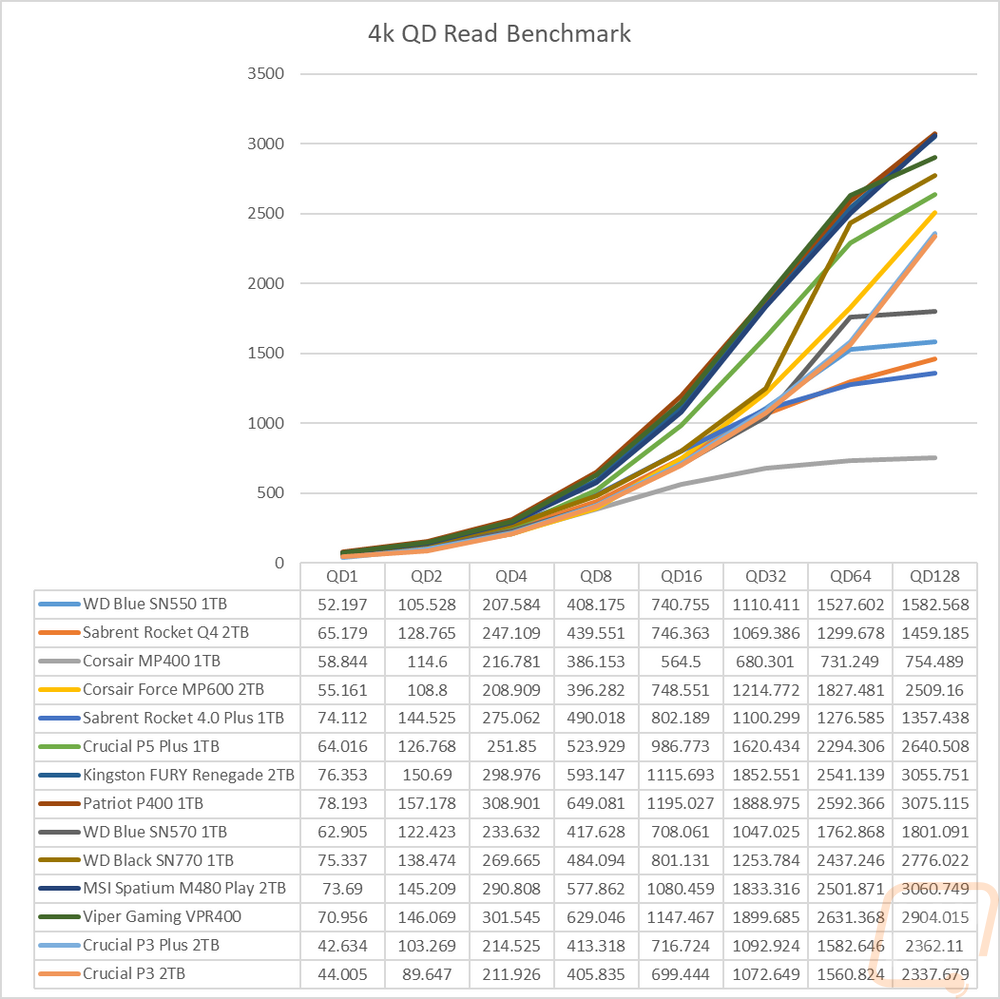 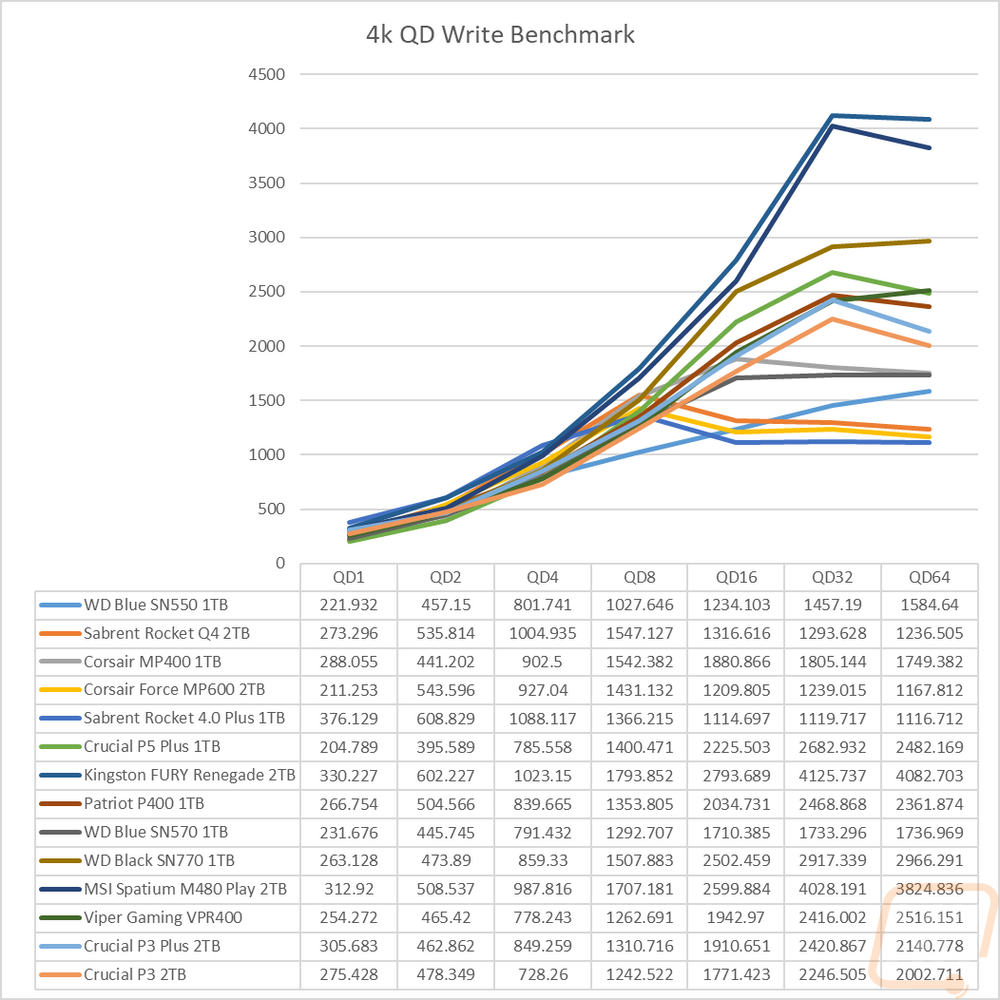 For ATTO Benchmark I set it to a queue depth of just 1 but ramped up the file size slowly to see how it would affect performance. For the read test in ATTO, the P3 did well on the early tests and then at 64KB stumbled and then leveled off right with the other 3.0 drives. For the write benchmark, the performance was nearly the same, stumbling again at 64 KB and then leveling off right at the top of the performance of a PCIe 3.0 drive and with the SN570. 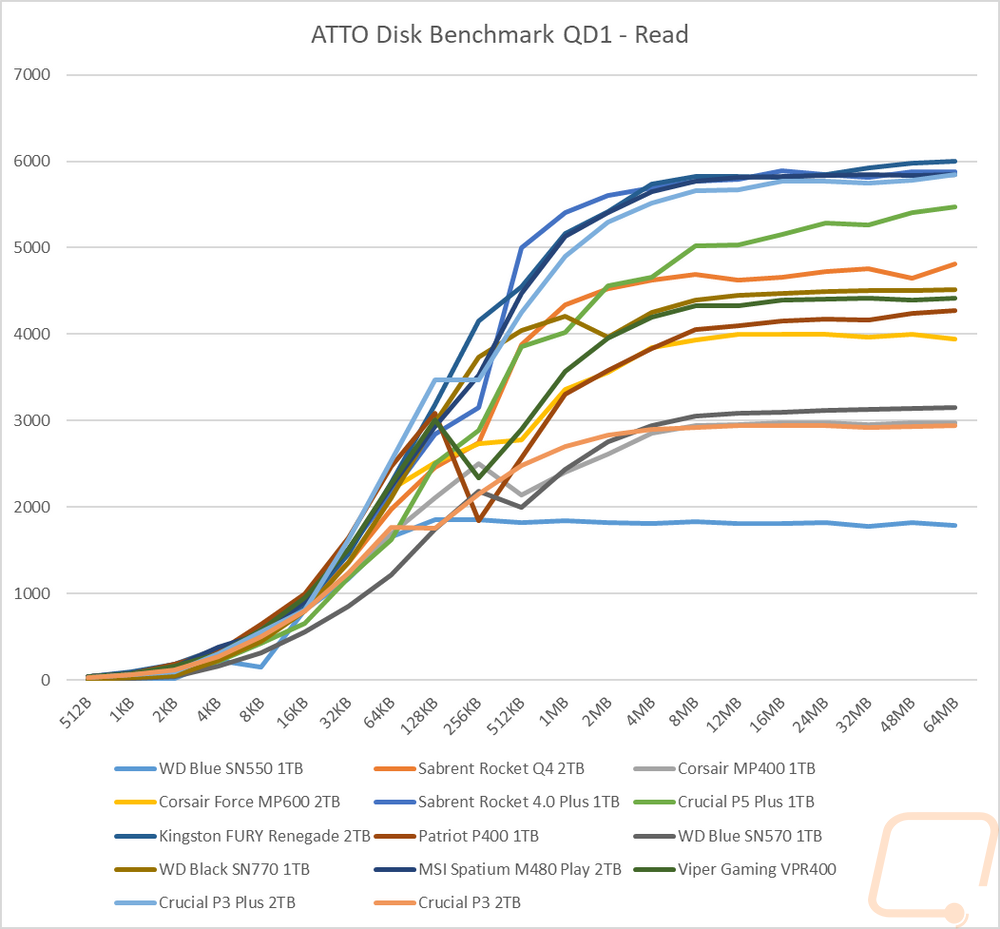 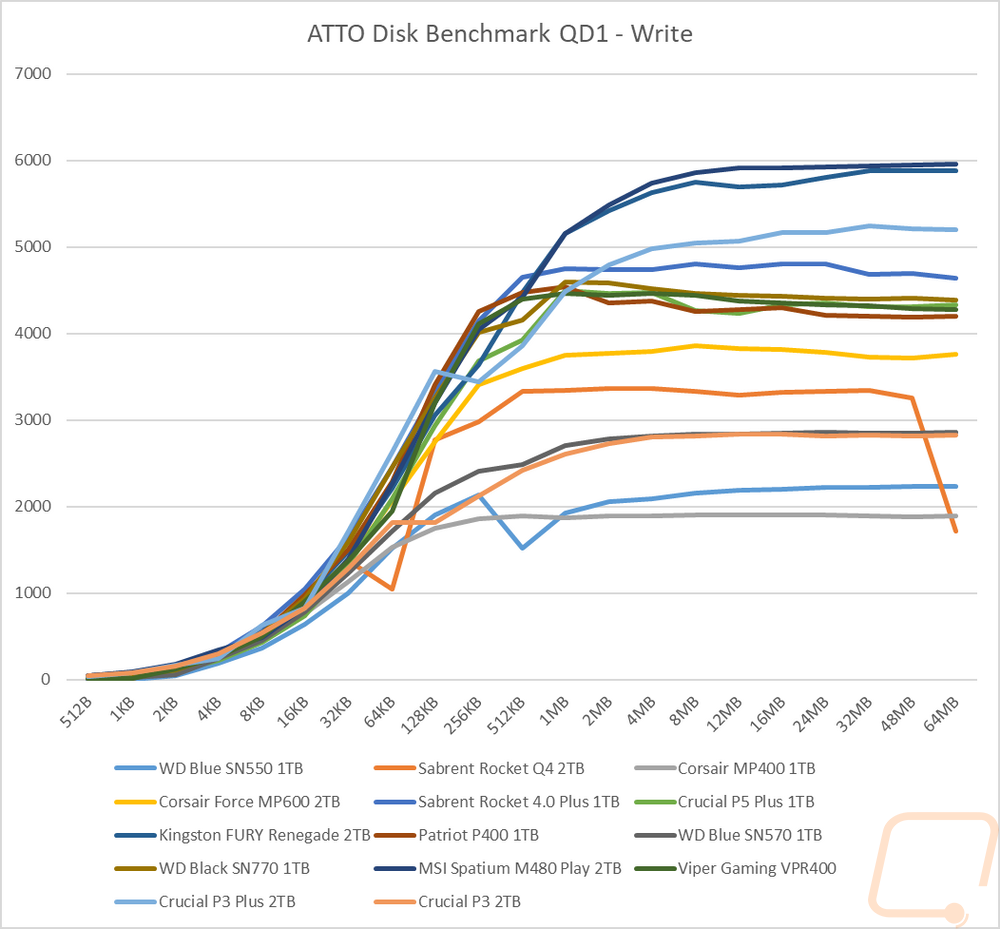 Next up I wanted to look at more real-world performance and for this, I started with PCMark 10 which has an overall full system benchmark for storage and then one focused on data storage drives. In the full system drive benchmark, the Crucial P3 wasn’t that far behind the P3 Plus considering the sequential performance difference between the two with the P3 in the middle of the pack overall for the data drive benchmark and way out in front of any PCIe 3.0 drive for the full system benchmark. 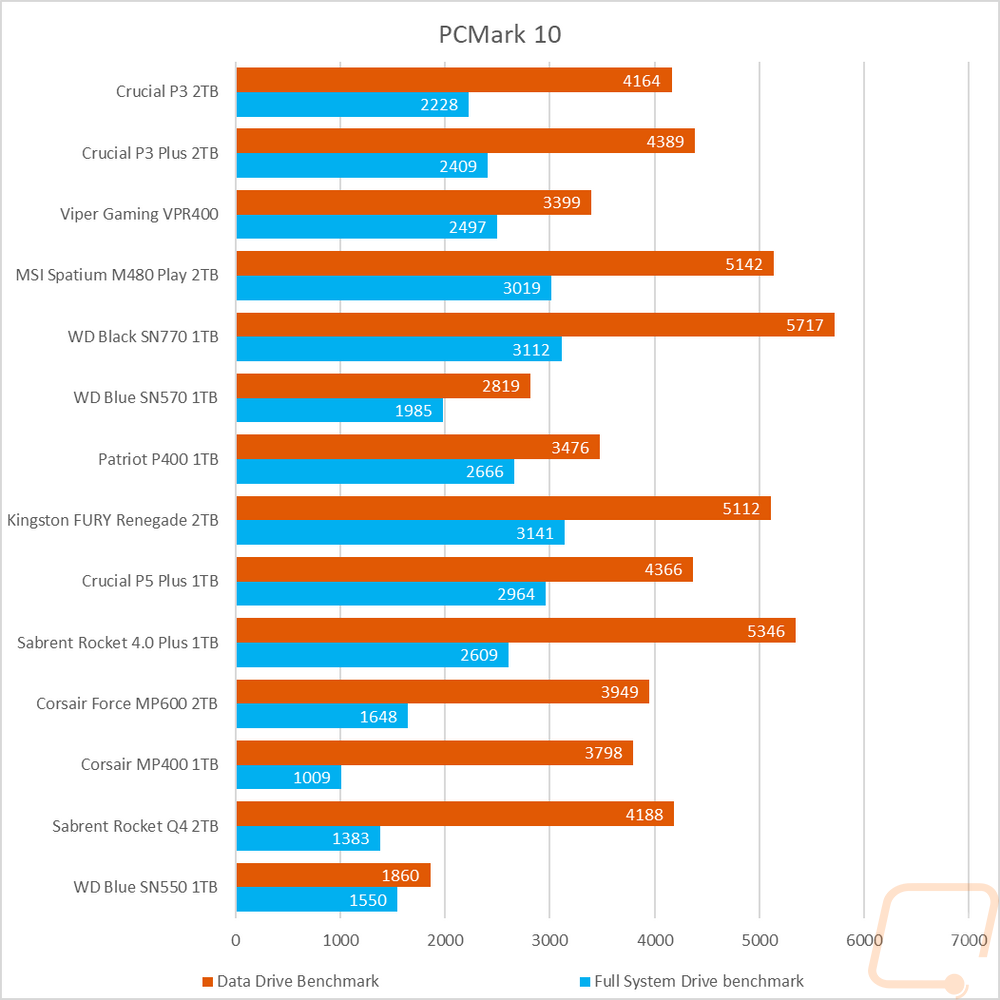 Next, up for more real-world resting, I did our file transfer tests. You don’t get any more real-world than this. For each drive, I copied the folder filled with files to the drive tested and then back to the Rocket Q4 in our test bench. I used three file types, movies which are large single files, a folder filled with RAW and JPG photos, and then a folder filled with word documents. Starting with the movie files the Crucial P3 did well but was faster on the reads when transferring back to the PC. The picture file transfers for the P3 were right in line with the P3 Plus. Last up on the document file transfers the P3 was a little behind the P3 Plus but did a lot better than the other PCIe 3.0 drives and some of the 4.0 drives as well.

I also ran the P3 Plus using AIDA64’s linear read disk benchmark for 30 minutes to heat things up to see what the thermals for the drive would look like. Not surprisingly the controller was where all of the heat was coming and with it being center mounted it does heat up the NAND on each side of it. The P3 and the P3 Plus look similar in their thermals having the same layout but the P3 is noticeably cooler on the controller compared to the P3 Plus with the P3 running 41.9c and the P3 Plus at 47.8c. That difference also shows farther out with the NAND running a little cooler on the P3 as well. 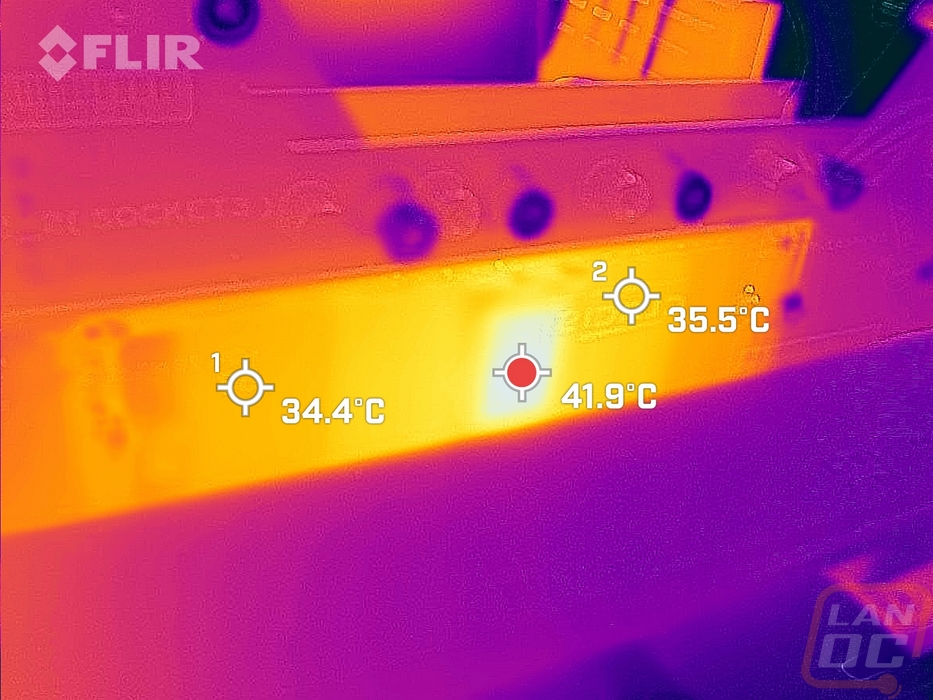