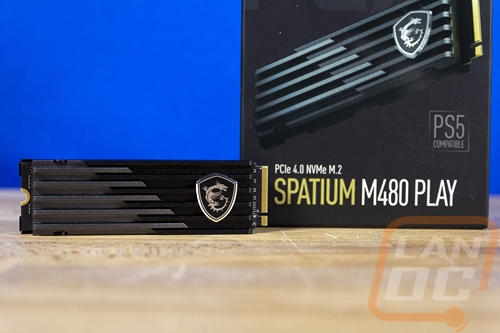 The MSI Spatium M480 Play isn’t a bad first look at MSI’s jump into SSDs. Like with the rest of their components, MSI has jumped right into the higher-end SSD market with gaming in mind and the Spatium M480 Play fits with that perfectly. I like the styling that they went with, the black and grey finish on the heatsink, and slipping in the MSI Gaming logo as well. The built-in heatsink has both its upsides and downsides. For cooling, it made a huge difference. I wasn’t able to heat it up at all really. It also is what gives the M480 its PS5 compatibility but if you are planning on using it for PC use it could also give issues with some higher-end motherboards which often have their own heatsink designs built-in.

The drive itself was surprisingly hot and cold for its performance testing. In almost all of our tests, it topped the charts, especially with its nearly 7000 MB/s read and 6800+MB/s write performance. It was also great in our IOPS tests. But it struggled in some of our real-world tests with performance drop off part of the way into the tests and in AS SSD’s file transfer test as well. This doesn’t hurt its potential as a gaming drive though, but I wouldn’t really look to use it for storage that you would access a lot. 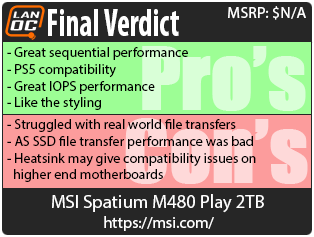 You might call him obsessed or just a hardcore geek. Wes's obsession with gaming hardware and gadgets isn't anything new, he could be found taking things apart even as a child. When not poking around in PC's he can be found playing League of Legends, Awesomenauts, or Civilization 5 or watching a wide variety of TV shows and Movies. A car guy at heart, the same things that draw him into tweaking cars apply when building good looking fast computers. If you are interested in writing for Wes here at LanOC you can reach out to him directly using our contact form.
Discuss this article
Log in to comment
Posts in discussion: MSI Spatium M480 Play 2TB

We have 1100 guests and one member online