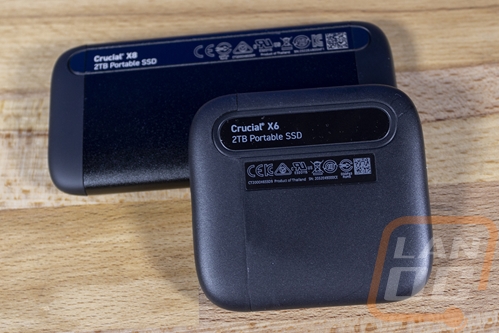 I loved the X8 when I first took a look at it so it isn’t a huge surprise that I am still a fan now with the larger 2TB capacity. There are faster drives available when you get into Gen 2x2 and Thunderbolt 3 drives which I have tested both in between my last look at the X8. But when it comes to what everyone has for connection options, the standard USB 3.2 Gen 2 performance is universal and the X8 comes with adapters for both Type-C (which I will always prefer) and Type-A for those types you need it. The X8 still stands out with its aluminum construction which is solid in hand and makes you feel like you could throw it and it wouldn’t hurt it. It also still has that smooth rounded shape that is so easy to toss in your pocket as well, even though the footprint of it is larger than some of the other drives out there.

The X6 is the other hand takes all of the same styling that I like about the X8 but makes it half the size and because this is more of a budget-focused drive it also has a plastic construction that ends up being extremely lightweight. It doesn’t have the X8’s solid feel, but it isn’t too bad of a tradeoff. The X6 goes back to a SATA based drive which performance-wise means about half the sequential transfer speeds. But where it stands out is when you compare it to hard drive based drives where it is going to be 4 times as fast. The X6 accepts that the new NVMe drives are going to be faster, but tries to make up for it in size and pricing. It also is available in the big 2TB capacity just like the X8 which makes it great for competing against the hard drives which also have the same big capacities but take longer to get things on to the drive.

The X6 did have a big downside, its performance when transferring word documents was really bad. The small file size and quantity of files just completely overwhelms the drive. Its write performance overall struggled as well when compared to its read performance. In the cons, I also included a note reminding everyone to get the version that includes the Type-A adapter for a few bucks more if you need it. It isn’t bad that you have the option to get it with or without the adapter, but for a SATA based drive, I can see people using the Type-A often because you won’t see too much of a performance drop from normal USB 3.2 ports.

The X8 has a few downsides as well, but only one is much of a big deal. Its document transfer speeds were also low when compared to other NVMe based drives. Not nearly as bad as the X6, but still a concern if that is the type of file that you plan on mostly moving around. Beyond that, I just mentioned that some similar drives have a smaller footprint, though I think the rounded shape of the X8 is still easier to carry about.

Now for pricing, rather than trying to list them all out, I put together a table below. There were a few things that stood out to me.

For starters, the adapter model of the X6 on Amazon isn’t even available in the 1TB model and at 2TB the price difference is huge right now with it costing $10 more. Which doesn’t line up with the pricing Crucial is trying to sell them on their website. Making that adapter way too expensive. Another big standout is the 1TB prices between the X6 and X8. The X8 is $6 LESS than the X6 right now making it a no brainer given its aluminum housing and faster speeds, not to mention it includes the adapter. Seriously, check it out and use my affiliate link while you are at it lol. The pricing at 2TB makes more sense and the $65 discount going from the X8 to the X6 makes sense if you don’t need the raw performance as much but still need the capacity. At the 2TB capacity which is what I tested out today the pricing is more in line with the market. The X6 is cheaper than similar drives like the SanDisk Extreme which is $289 an the Samsung T5 at $276. The X8 ends up being a touch higher than the Samsung T7 which is $319 but lower than the SanDisk Extreme Pro which is $329 making it middle of the road. 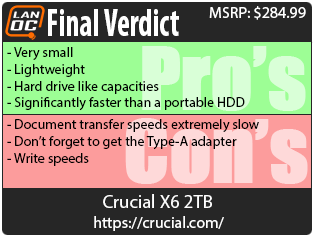 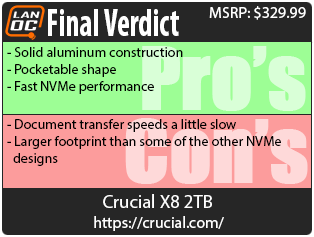 You might call him obsessed or just a hardcore geek. Wes's obsession with gaming hardware and gadgets isn't anything new, he could be found taking things apart even as a child. When not poking around in PC's he can be found playing League of Legends, Awesomenauts, or Civilization 5 or watching a wide variety of TV shows and Movies. A car guy at heart, the same things that draw him into tweaking cars apply when building good looking fast computers. If you are interested in writing for Wes here at LanOC you can reach out to him directly using our contact form.
Discuss this article
Log in to comment
Posts in discussion: Crucial X6 2TB and X8 2TB