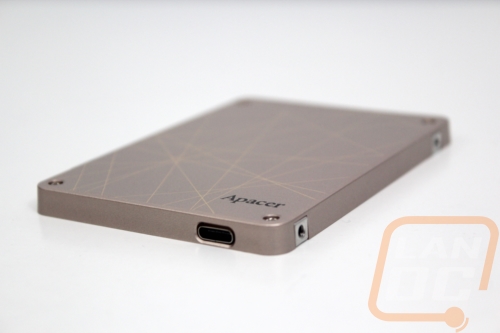 For most of my performance testing I focused on the SATA performance of the Apacer AS720, but at the end, I do take a look at the USB performance as well. The SATA performance is what is going best show the capabilities of the drive and frankly, file transfer is really the only thing you need to worry about when running it as a USB drive. So to start things off I tested using CrystalDiskMark using the sequential setting to see the overall read and write speed of the drive. While the AS720 didn’t top the charts, in the read speed test it fell in the middle of everything. The gap between it and the drives above it was very small. In the write speed testing, the AS720 came in a little lower, with the higher end drives having a clear advantage here. With a write speed of 453.9 MB/s the numbers were still respectable, though. 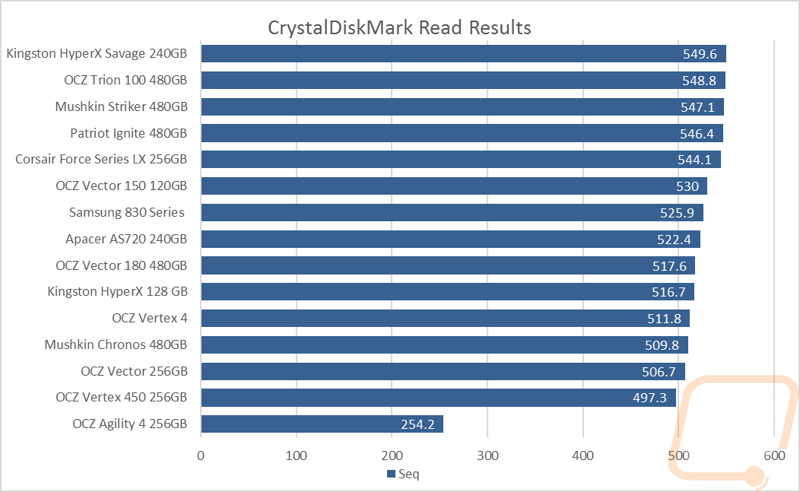 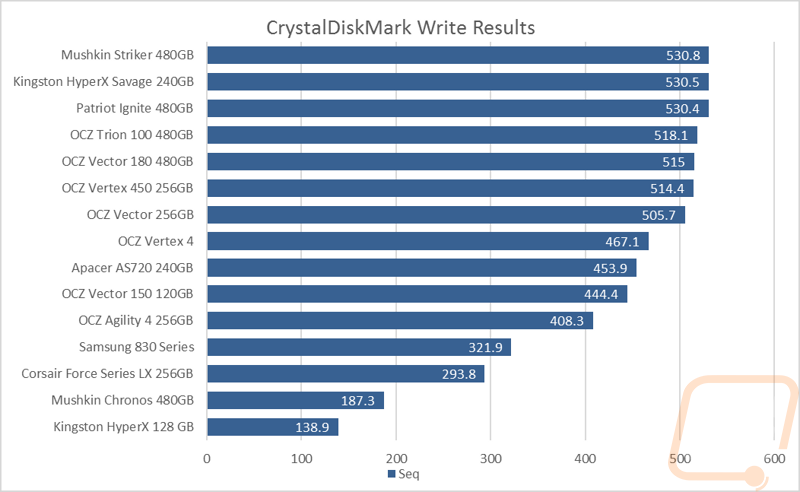 Next, I used AS SSD to test file transfer performance with three different file types. Here the result is the amount of time it took so the lower the result the better. I combined all three results so we can get a better look at the overall performance rather than focusing on any one number. The AS720 came in around 11 seconds between all three tests, a respectable result that is better than 2/3 of the drives tested. 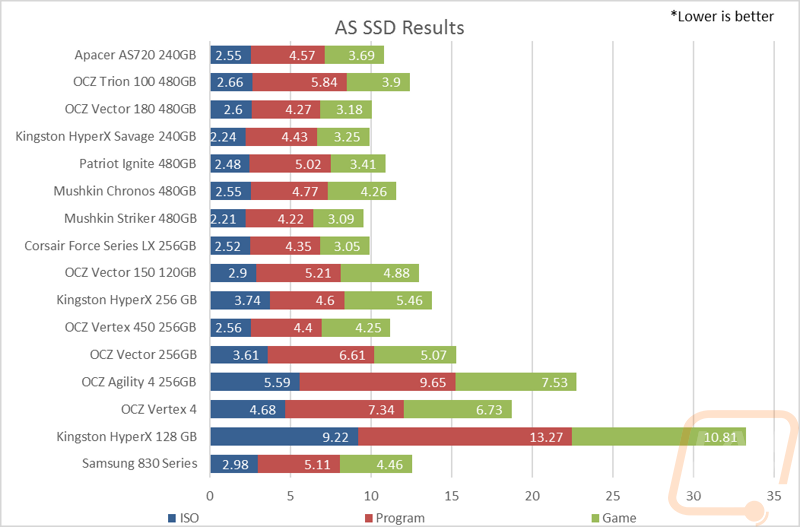 Next, I used Passmark 8’s advanced hard drive benchmark. Here we use the four default settings to test the AS720 in a few different situations. In this chart a higher result is good. The AS720 didn’t do as well in this test, especially in the File Server test that the fastest drives really excel at. The AS720 isn’t really designed for any of these situations other than the Workstation test, but in that one it performed fine. 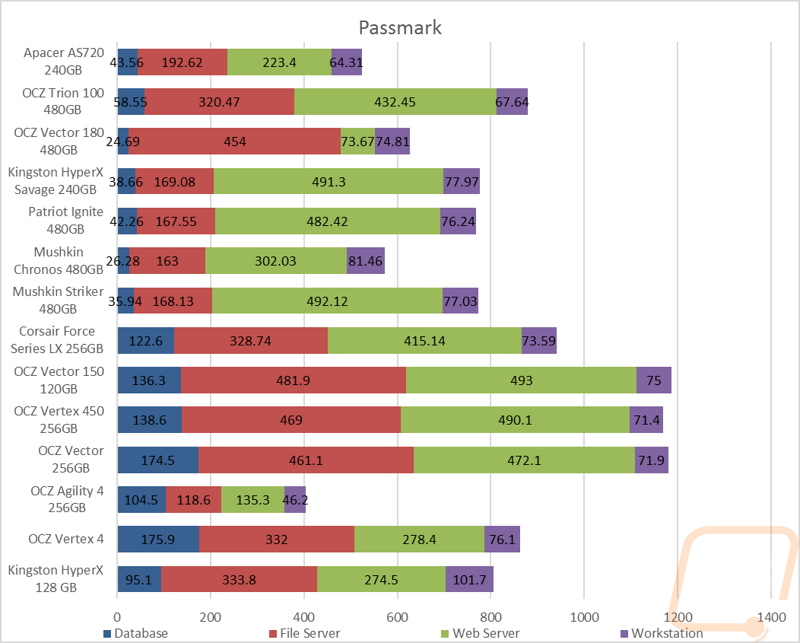 Next for more of a real world test I use PCMark 8’s Storage benchmark. This test runs through multiple everyday programs. Rather than use the PCMark score I use the overall Storage Bandwidth result. This lets us know the average speed the drive had across ALL of the tests. Here the AS720 actually performed really well. The Vector 180 still outperformed it, but the AS720 held its own.

Next, I wanted to see the overall IOPS performance of the drive. To do this I use Anvil’s Storage Utility. I focus on the 4k results with a queue depth of 16. Here the AS720 performed really well on the write performance but fell behind in the read IOPS. I will have to take a closer look at the queue depth performance in the next test to see what the issue is there, but I was impressed with the write IOPS, they are still about 20k below the high-end drives, though. 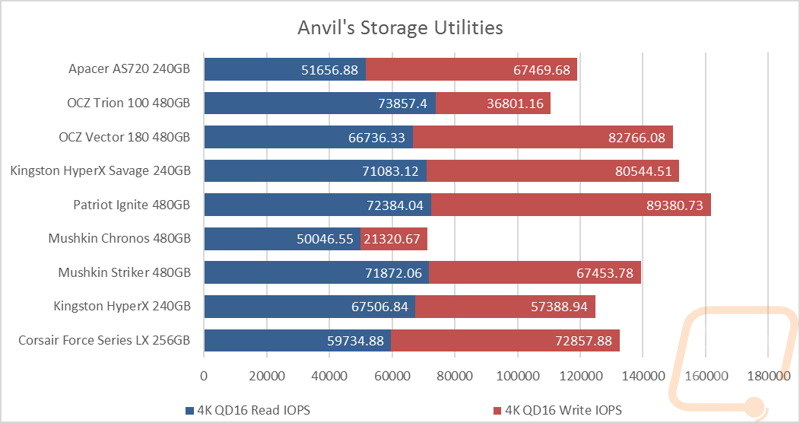 Okay, my last normal test was to take a look at how the drive handles varying queue depths. To do this I once again use Anvils but this time, I manually test both read and write performance starting at 1 queue depth, doubling it each test. Here we can see that in the read test the JMF670 controller falls on its face a little. It was a little slower from the start, but each time I double the queue depth it falls farther and farther behind. The Chromos performed similarly, but that isn’t really a great drive to compare too. Funny enough, in the write testing, we can see why the drive did well in our IOPS test. Where the HyperX drive capped at a queue depth of 4, the AS720 kept rising up until a queue depth of 32. The higher performance drives did still outperform the AS720, but It’s good to know it won’t fall on its face when writing a lot of files. 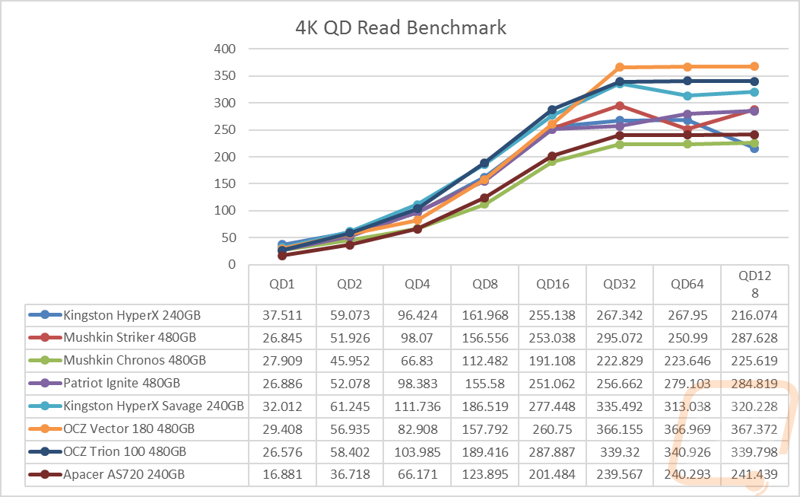 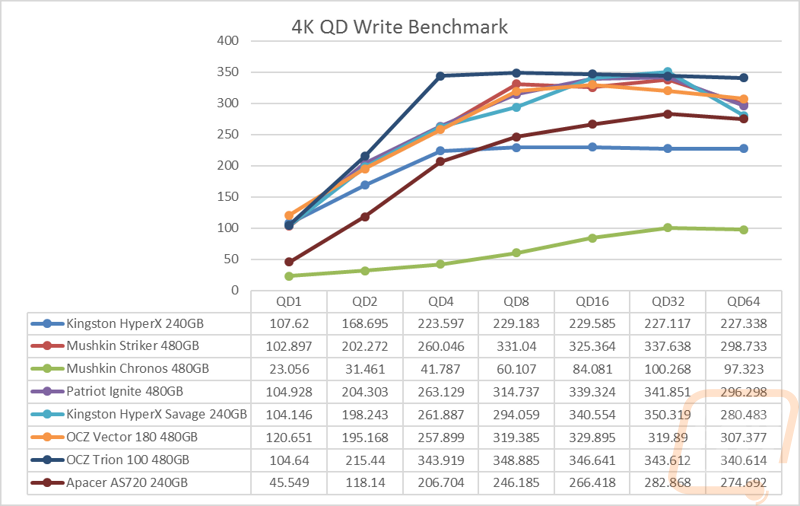 So for the last bit of my testing I wanted to talk a look at how the USB performance of the AS720 compared to the SATA performance. It’s clear that the drive is designed first to be an internal drive, but I’m digging the idea of a thin drive that hooks up via USB type C for cloning the files to it or later when you don’t need the drive anymore it can be a nice backup USB drive. I ran into issues with running USB 3.1 originally, but it turned out to be our test bench. So to test out the overall throughput I ran the AS720 in CrystalDiskMark using both its SATA interface and its USB 3.1 interface. Not surprisingly SATA was the faster of the two interfaces, but USB 3.1 wasn’t that far behind with numbers that I would have killed to have not that long ago via USB.

We have 1037 guests and one member online