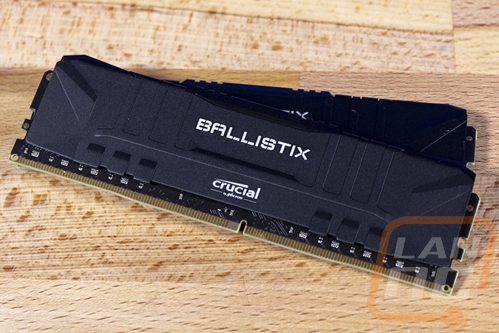 Between chrome gobbling up memory any time you turn your head and new games like Microsoft Flight Sim 2020 needing crazy amounts of memory. It is finally time for a lot of people to start looking going with big capacity kits like the dual 32GB dual-channel kit of the new Ballistix memory that Crucial sent over. I was excited to finally see the new Ballistix styling in person and I wasn’t disappointed. Other than not getting to also check out the cool white and red models that they have available as well as the RGB which is available in ALL of the colors. Crucial went with a heatspreader design that lets them use the same heatspreaders for both RGB and non-RGB which in my opinion makes more interesting colors like the bright red kits a possibility. Maybe orange can come in the future!

Looking past just the new aesthetic though, I was surprised that this kit has a CAS latency of 16. That isn’t a bad CAS for a smaller kit, but in a big capacity like this, all of the other kits with a CAS of 16 or 15 are running clock speeds at 3200 MHz or lower where this kit is running at 3600 Mhz. Again not a crazy high number, but when you put the whole package together it isn’t bad. It’s also always interesting to see how we can now get 64GB’s with dual-channel where I was running 8 sticks for the same capacity what seemed like just a few years ago.

As for pricing, I expected this kit to be crazy expensive and I think when Crucial initially priced it, it was. But It is now listed at $299.99 on their website and you can find it for 279.99 on Newegg right now which isn’t the cheapest 2x32GB kit listed but with 3600MH and a CAS of 16, I wouldn’t expect it to be. But what is surprising, is what even though as far as specs go it is cheaper than most. Of course, a lot of the more expensive kits are also RGB, and adding RGB to this kit bumps its price up $60 to $359.99. I expected the bump to be a little cheaper given the modular heatspreader design. Overall though, I like the direction Crucial is going here with their styling which was one of the main things that I felt was holding them back before. 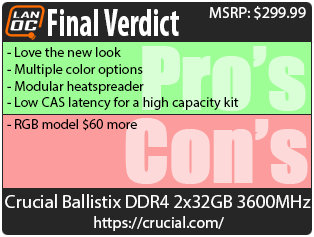 You might call him obsessed or just a hardcore geek. Wes's obsession with gaming hardware and gadgets isn't anything new, he could be found taking things apart even as a child. When not poking around in PC's he can be found playing League of Legends, Awesomenauts, or Civilization 5 or watching a wide variety of TV shows and Movies. A car guy at heart, the same things that draw him into tweaking cars apply when building good looking fast computers. If you are interested in writing for Wes here at LanOC you can reach out to him directly using our contact form.
Discuss this article
Log in to comment
Posts in discussion: Crucial Ballistix DDR4 2x32GB 3600MHz BL2K32G36C16U4B

We have 827 guests and one member online