Cluster is an issue that any entertainment enthusiast can sympathisize with, especially gamers. The requirement for all the equipment involved in the modern gaming PC plus three cores console systems on the market, each with their own cords and controllers, trying to switch between mediums can truly be a pain. The frustration is that much more for gamers in the press world, attempting to capture screenshots and videos between all these mediums. If only there were some way to combine them all in one place, so TVs wouldn't need switched, cords wouldn't need swapped, and capturing a gaming experience wasn't such a chore. AVerMedia has answered the call with their Video Capture Card, and has sent us a sample to help spread the word.

Packaging
The HD DVR capture card comes packaged in an average-sized box, color schemed to accentuate both the product images and detailed features. The reverse side continues to list the capability of the card, and has diagrams to show how it works. Inside, paperwork and installation CD rest on top of the card and accessories, the former bubbled wrap for protection and the latter indiviually bagged. 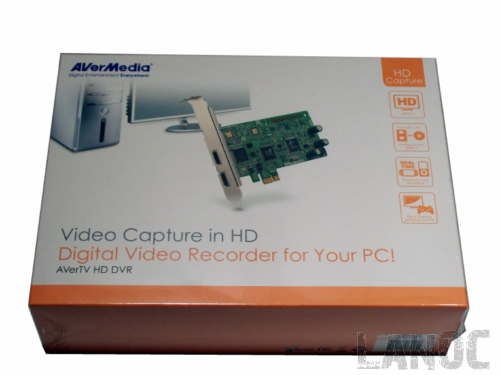 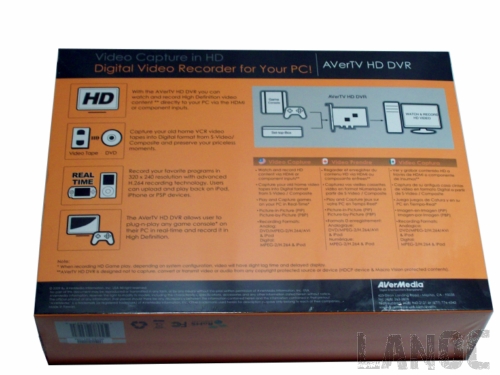 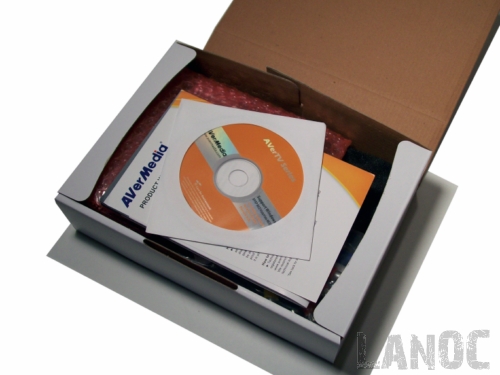 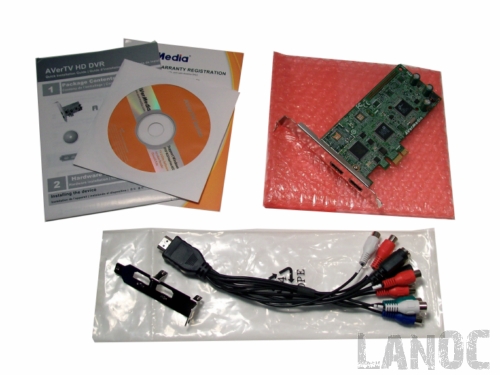 The input of the capture card is equipped with HDMI iput and a 10-in-1 dongle, so AVerMedia hasn't left last-generation devices in the dark: this conversion cord from standard component and S-video has been included to ensure you bring all your devices with you. A low profile bracket is also included if installation requires the smaller PCI opening on your case. 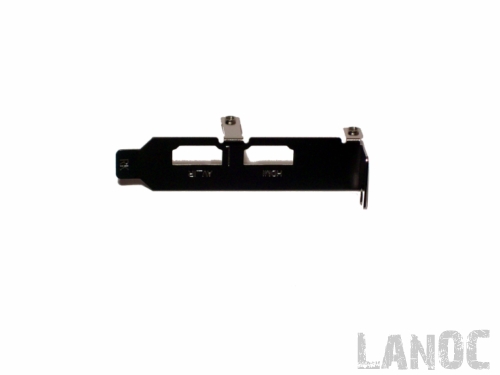 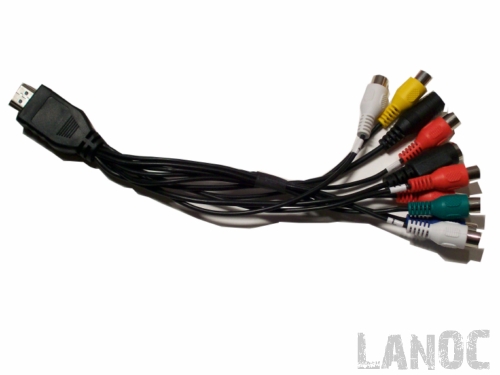 Installation
The capture card is a PCI expansion card, so you'll actually be installing this hardware directly into your motherboard. As mentioned, if needed the included low profile bracket can be swapped to ensure its compatible with a large array of towers. The card will simply plug into your board, though securing the bracket to the case will require your own screw. There should be no problems installing the hardware to the motherboard, the nature of the capture card is a very painless operation. 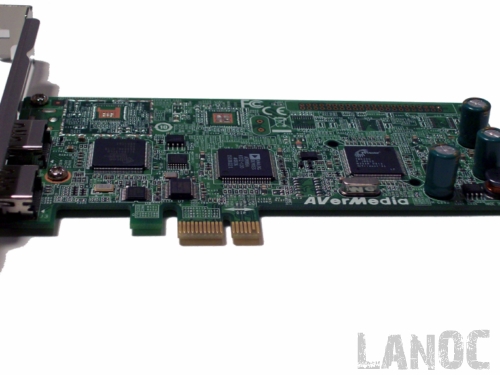 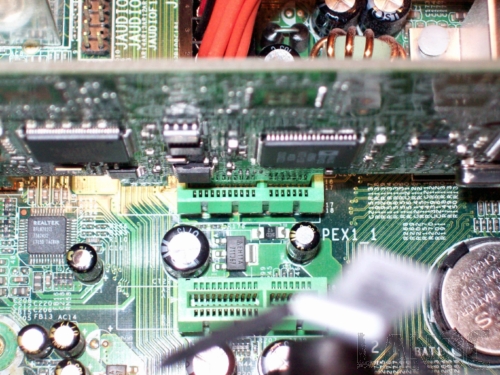 Once the card is in, the software will need be installed on your computer. The program file occupies approximately 81MB of memory, and takes only a few minutes to complete. The disc installs a program that creates a 'lobby', dubbed the AVerMedia Media Center that allows you to choose exactly what it is you want to do. Also included on the CD is a PDF file with more detailed instructions, since the only paperwork included in packaging is a breif leaflet. 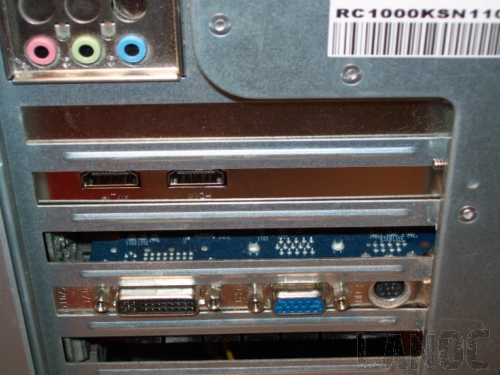 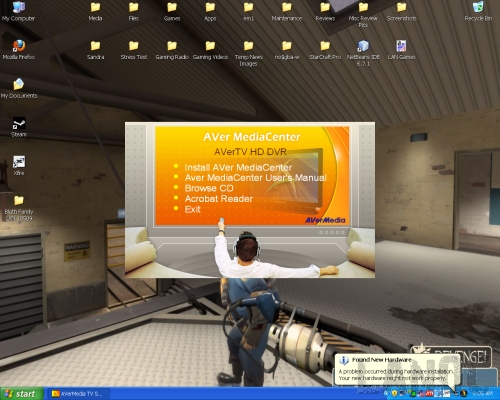 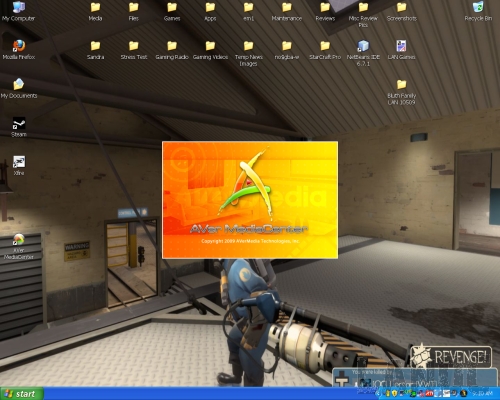 Using the installed software, the Media Center allows you to choose several options: TV, Video, Music, Pictures, or Settings. Each has it's own interactive emblem at the top, and scrolling between the options presents no lag whatsoever; indeed, assuming your computer meets the minimum requirments, loading times between modes are virtually non-existant. The Media Center itself works much like an Internet Explorer window, complete with a title bar at the very top with a back button. You can also minimize, restore, exit, and even call up the user manual from quick buttons in the top right hand corner. In the bottom left, you'll always have an action bar present from which you can do a number of things: record, freeze, stop, play, previous, next, back, skip, capture, channel, mute, volume, etc.

In TV and Video modes, you can watch external videos using the input you've connected to the capture card, and perform any of the actions available, such as capturing shots or freeze frame. In Music mode, music files can be imported to be arranged in a playlist. The Media Center has all the basic functions of any music player, such as sequential or shuffle play, track skipping, etc. The Picture mode can be used to view images captured from the card itself or imported external files. These images can then be arranged to be used in a customizable slideshow. 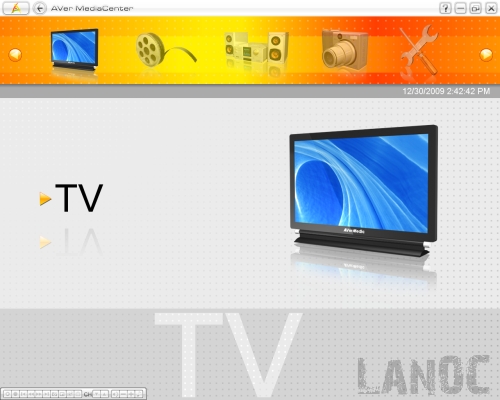 One of the more unique options of the Media Center is the ability to use TimeShift, a function that records in the background and allows you to return any point in the video, displaying both the TimeShift recording time and the file length time as well. This is an extremely useful feature for video editing, and it all runs smoothly in one place, the Media Center. As if this weren't enough, multiple source display is also supported, allowing several modes such as picture-in-picture or picture-by-picture to view two files at once.

Since we're largely a gaming review site, the performance of game consoles was a big concern to me. I've used a few external recording/display devices before, always with reduced quality or lag of some sort. I was extremely pleased to find that the AVerMedia HD DVR capture card had neither. With the majority of game consoles already including HD as an option, it isn't hard to hook that output up to the capture card. And it looks fantastic. Furthermore, there is virtually no lag between the user's input on the controller and the response in-game, a feat most recording devices fail on, so you'll actually be able to play the game while capturing. Even when used for its most basic funtion, allowing everything to be chanelled into one output is amazing in itself. 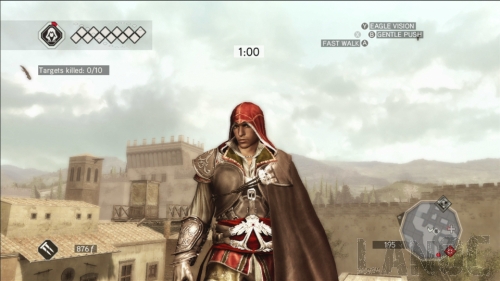 A screenshot of Assassin's Creed 2 using the AVerMedia Capture Card, only edited to be resized.

Overall
In the gaming industry, poor quality just isn't going to last, in any realm. With high-definition recording, a Media Center equipped with several functions and features, and a painless installation on any level, the AVerMedia HD DVR capture card is a blessing. It does a great job capturing and editing both screen shots and videos, and helps to organize and simplify the life of any gamer. In relation to other high-end capture cards, it's about twenty dollars more, but for high-definition use, a plethora of extras, and two inputs on the card, it's definitely worth splurging for. 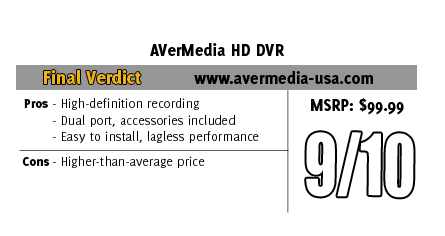 Author: Lersar
Contributing Editor / Event Staff
Adam is a big proponent of LAN parties, esports and speed-running, and helps organize our semi-annual LAN events. He has covered hardware and software reviews of a wide variety, but most content these days come from event coverage, such as other LAN parties.
Discuss this article
Log in to comment
Posts in discussion: AVerMedia HD DVR

We have 1666 guests and one member online