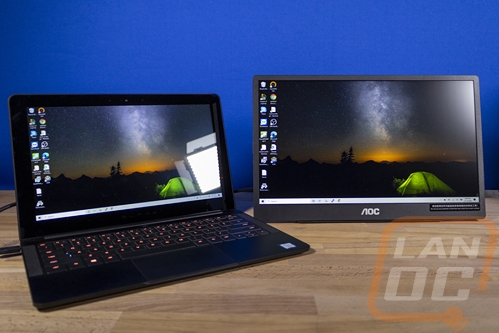 The box for the AOC 16T2 has a nice picture across the front that shows that this is a portable screen attached to a laptop. The hand kind of makes it look like they are pointing at the screen but they are trying to show that it is also a touchscreen. The front of the box doesn’t however show the model number/name at all which is interesting. They touch on the main features which are the USB Type-C connection as well as HDMI with icons as well as the touchscreen and built-in battery. 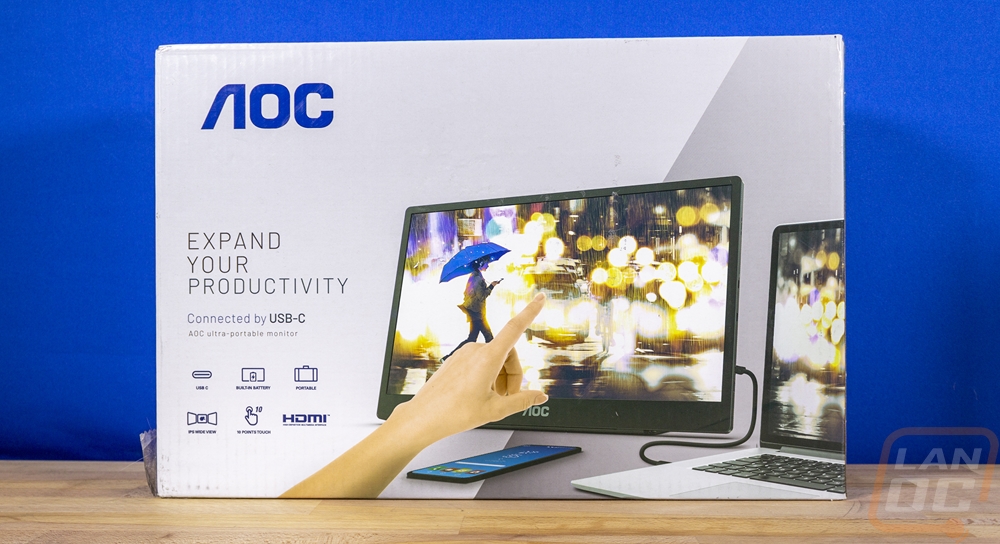 For being a portable battery, I was surprised at just how much it felt like I was opening up a normal monitor when I opened everything up. The 16T2 comes in between two foam panels for protection and it was also wrapped up in a foam bag as well. All of the accessories and documentation are all packed into their own cutouts on the top of the foam as well. 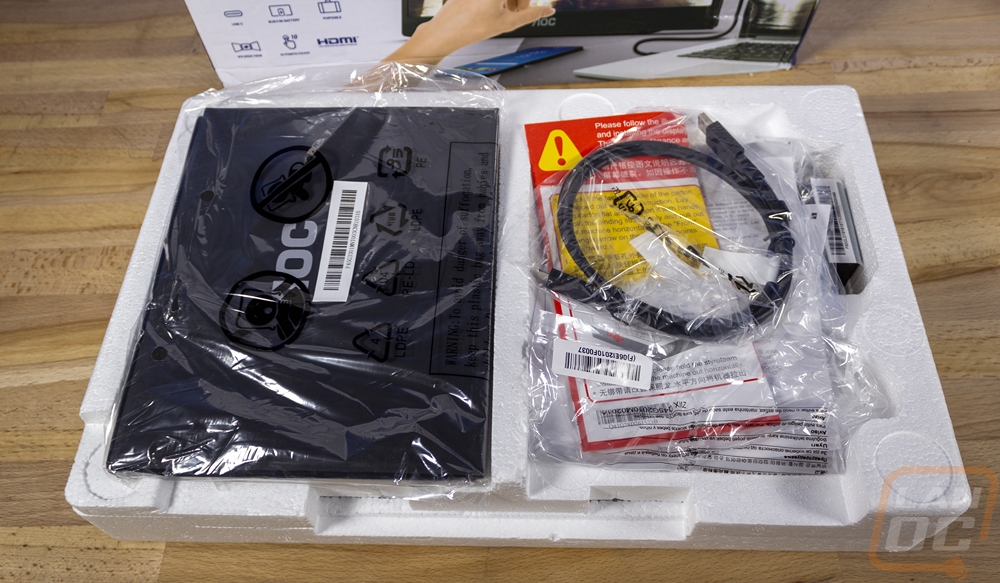 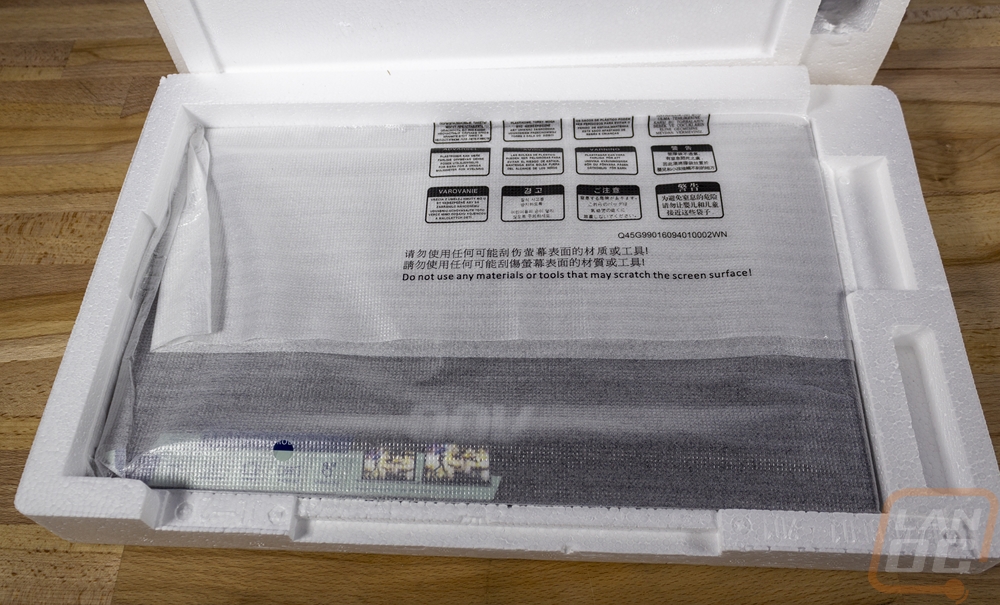 It came with a surprising amount of documentation. There is a quick setup guide as well as a warranty statement. The bright red paper explains how to take everything out of the box without damaging everything, which would be helpful but I didn’t find this until I pulled everything out. That is surprisingly important though, I have damaged a monitor in the past when pulling it out of the box. Then the last paper is a picture guide on how to set up and use the included screen protector and magnetic stand. 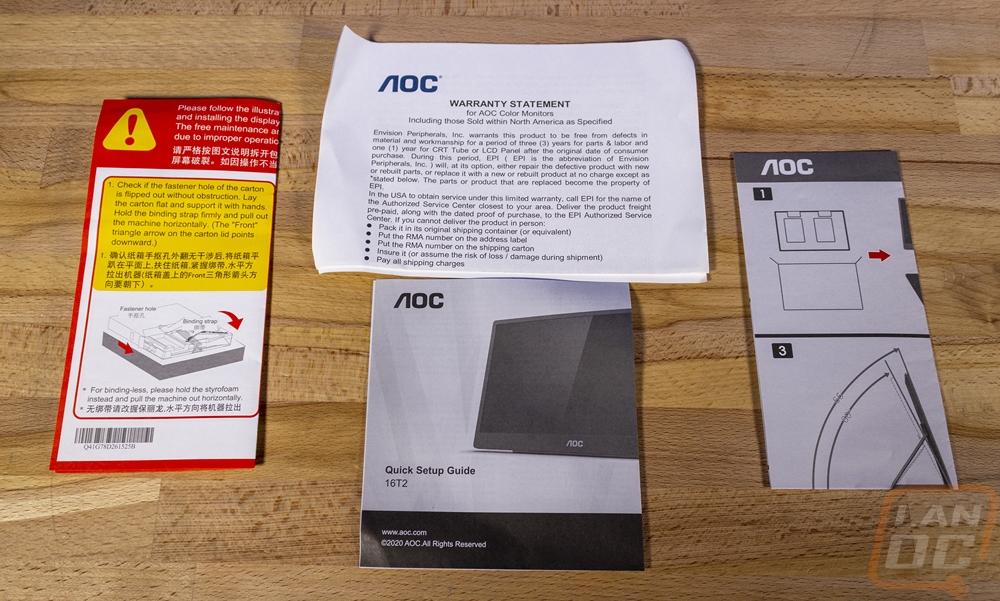 The 16T2 comes with a few different accessories. For cabling, they include a USB 3.0 cable. This is a thick cable with Type-C connections on both ends. AOC also included an attached Type-C to Type-A adapter which is very helpful. Most Type-C devices, if they include an adapter at all, include a loose adapter that can be easily lost. This slides up the cable when not in use making sure you won’t lose it. The cable also comes with an AC power adapter as well which has a type-c connection on it as well. This is for when you hook up using the HDMI connection or if you want to charge up the built-in battery bank. The steel plate that is included is the VESA mount. The mounting holes built into the monitor are smaller than the standard VESA holes, so they include this adapter for anyone who needs to mount the 16T2. 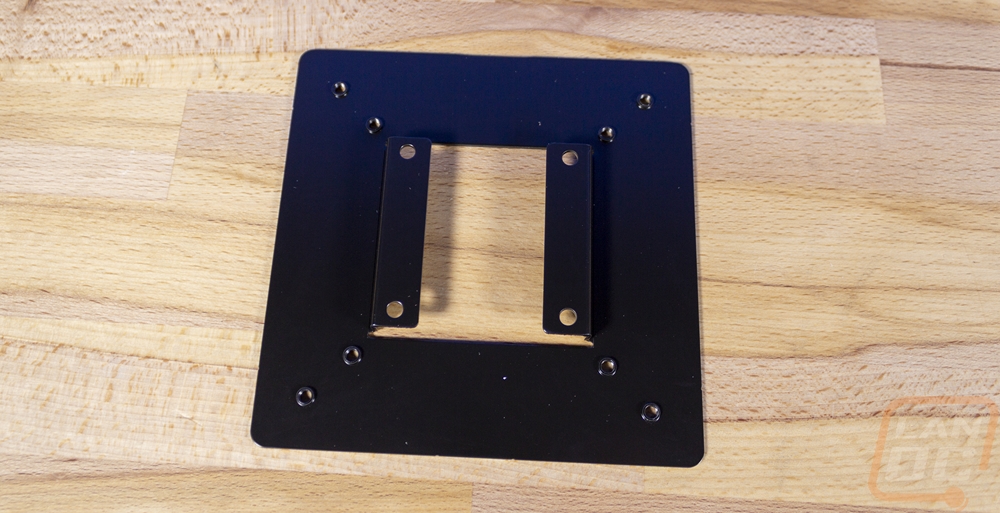 The last accessory included with the 16T2 is the most important, the screen protector and stand. It comes folded in half with foam in the middle and it doesn’t look like it will fit the 16T2 at all. It does fold-out, however. On the inside, it has a soft microfiber finish that helps protect the screen from scratches. Then on the outside, it has a fake leather-like finish with the AOC logo on it. One end has two small plastic nubs on it and then the far end has a magnetic flap. In total, the cover has four folding points built into it. 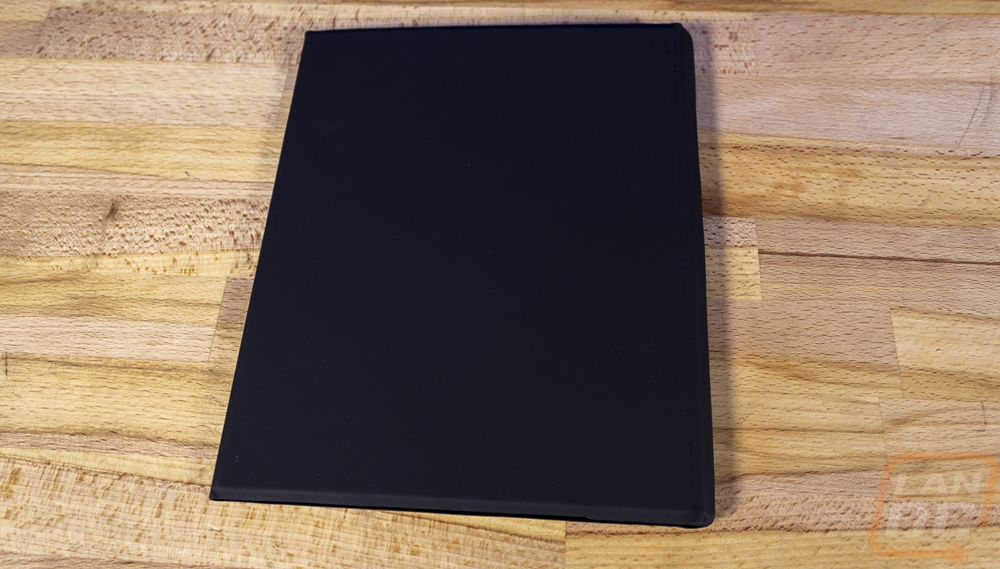 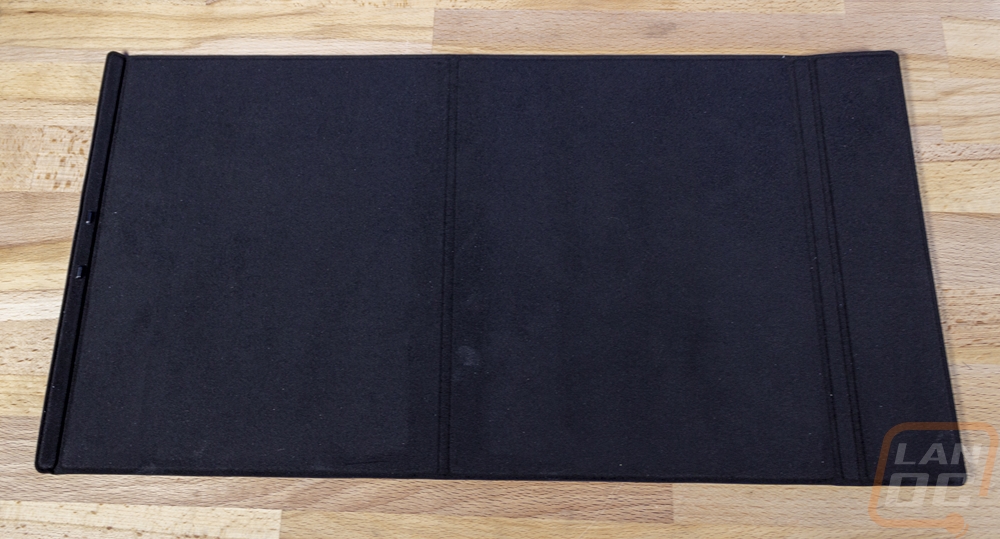 So the 16T2, as I’ve mentioned before, is a portable monitor and with that, it is unique in that it isn’t as thick as most standard monitors. It also has a very flat profile, not one that gets thicker in the middle. Its overall thickness is right at 1 centimeter or 10mm thick. It is 229.8mm tall and 364.4mm wide which is just a little larger than your average ultrabook and close to the same in thickness as well. The latest Razer Blade Stealth for example is 15.3 mm thick. 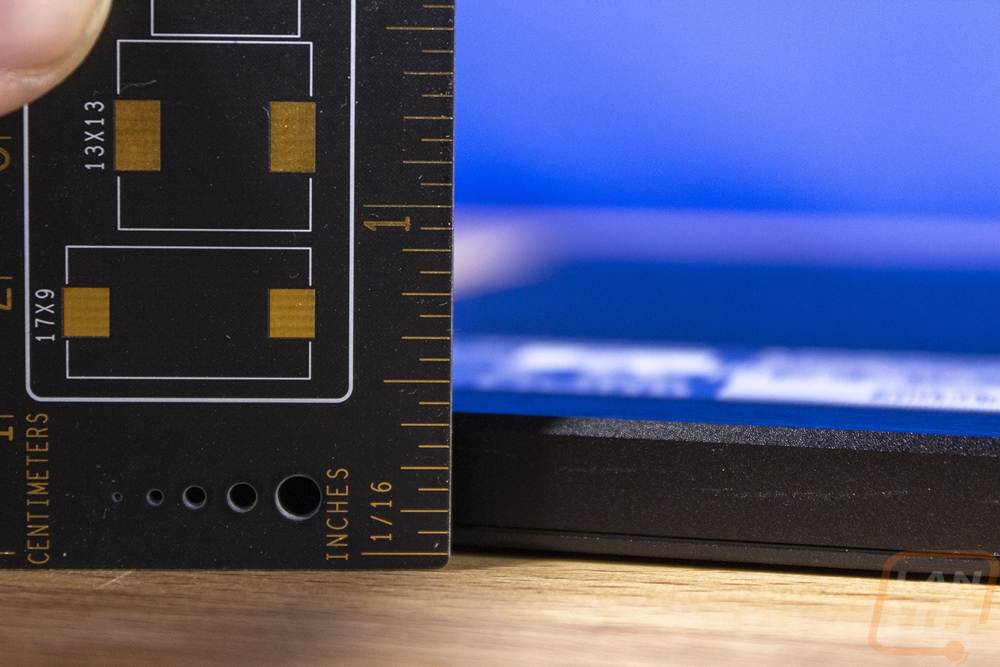 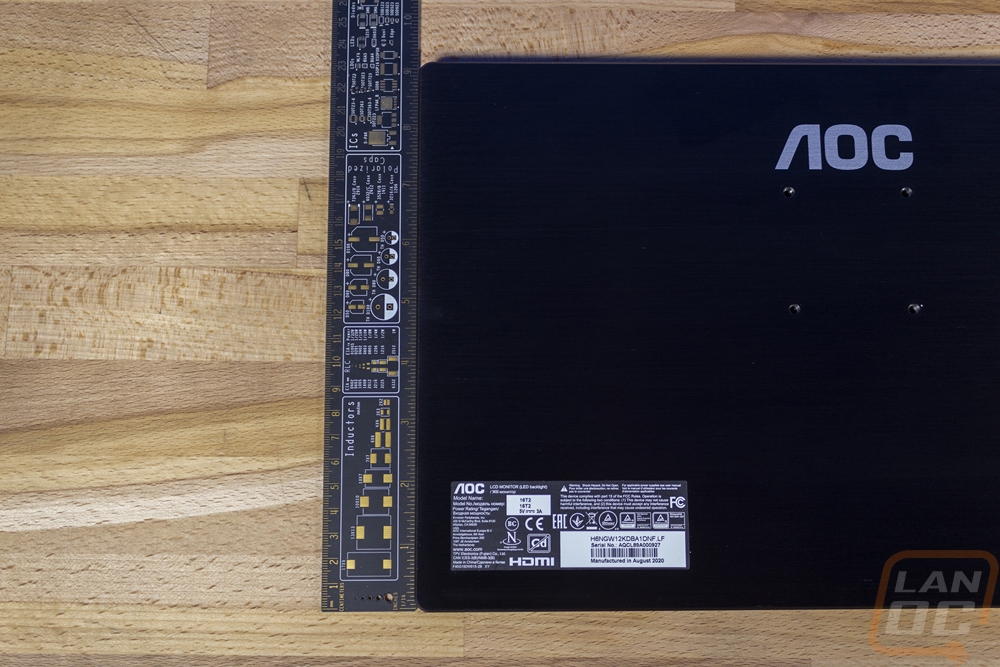 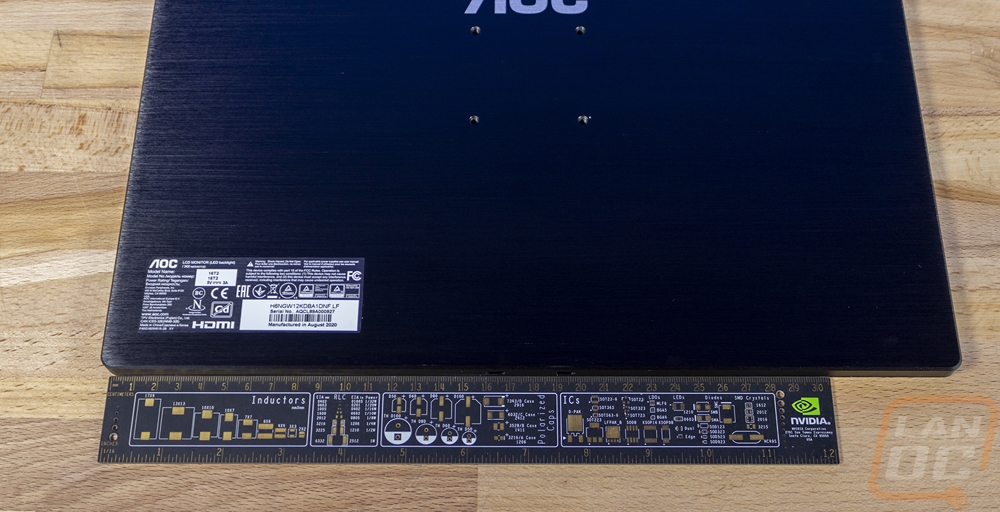 The back of the 16T2 is covered in one brushed aluminum panel which has a slight curve at the edges. Its black finish looks great with the brushed finish and near the top, it does have the AOC branding on it, just like the stand/cover. The back has four screw holes for mounting the monitor if needed and they include the adapter to take this smaller pattern to the standard VESA layout. Beyond that, in the bottom left corner, it has a sticker. This has the normal regulatory logos on it as well as the model information and your serial number. The back also comes with a stick-on advertisement which is mostly for retail use but it does show off the features and has a picture of the display in use with a laptop. 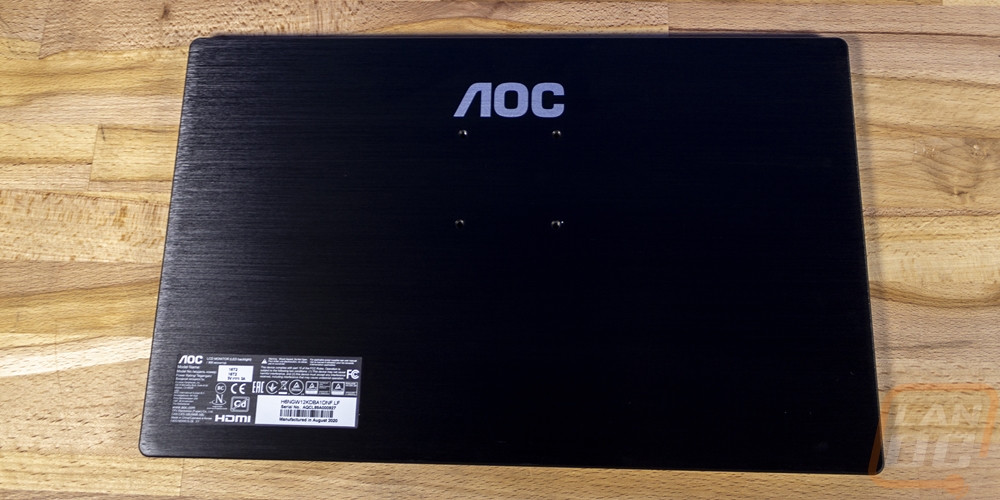 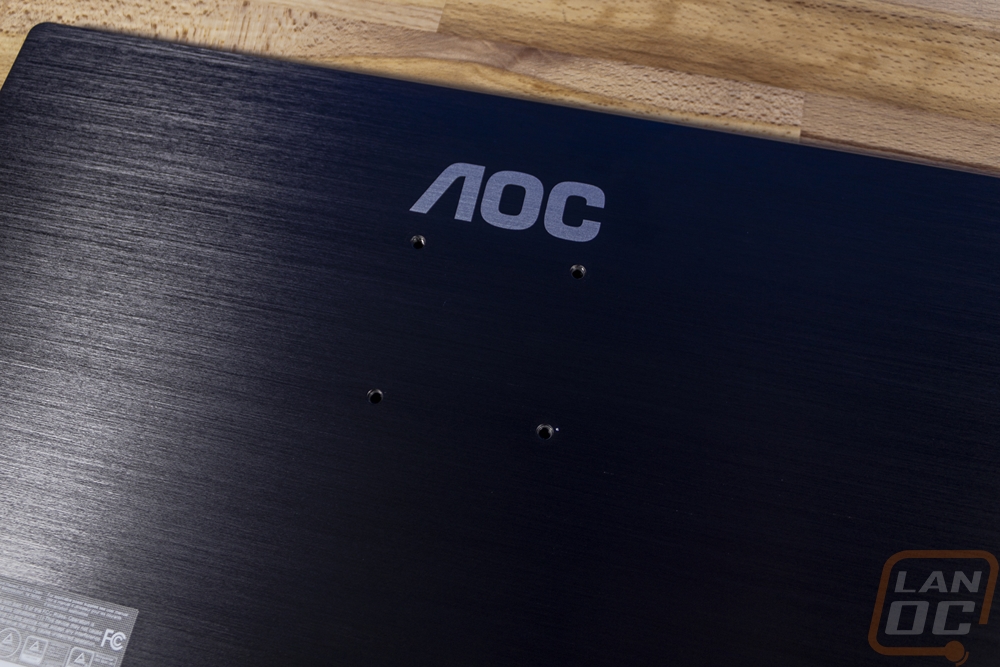 The business end of the 16T2 so to speak looks a lot like a laptop monitor really with its black plastic bezel with the AOC logo down on the bottom. The bezel is thinner on the top and sides and is more than twice as thick at the bottom. The bezels aren’t as thin as most modern monitors, though I don’t know that you would want the bezels to be too thin on a portable monitor it might break. The screen has a glass screen with a matte finish and the glass hardness is listed at 3H in the specifications. It is 15.6 inches diagonal and has an aspect ratio of 16:9 which gets you a resolution of 1920x1080. That is most likely lower than the resolution used on your laptop if you have an ultrabook like I do, but it is most likely all you need as well. I know with my laptop I run everything scaled up, I don’t need everything to be tiny on the already small screen. The display is an IPS display which should mean good viewing angles and it has a refresh rate of 60 Hz, this isn’t a gaming monitor so this is what you would expect for a standard monitor. 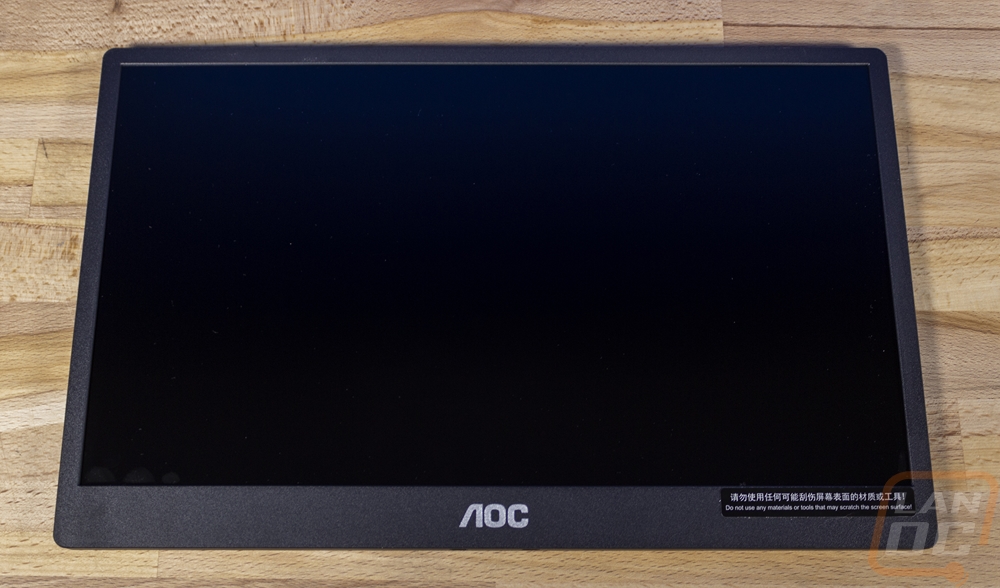 With the front and back of the 16T2 being so simple, AOC has everything all condensed into the side edges and along the bottom. The picture below shows the mounting points for the included magnetic cover and stand. The monitor has two of these, one on the right edge and one on the bottom. The cover/stand attaches to the right side when you are using it as a cover and to the bottom when you are using it as a stand.

The right side of the 16T2 also has most of the I/O connections which is only two ports. One is a USB Type-C connection which can be for charging the built-in batteries or power when running on HDMI. But most of the time this will be the display connection as well as power. You can also hook it up to phones that support it to output to the display or just to use the built-in 8000 mAh battery/power bank. The small slits up near the top edge are one of the two built-in speakers as well.

The left side of the 16T2 has a second USB Type-C connection which can handle all of the same functions as the other one, giving you the option on which side to hook up to. It also has a headphone jack with it as well if you don’t want to use the built-in speakers (which this side also has) and would prefer to use your headphones. Then this side is where you have the status LEDs and controls. The power button is on its own then above that is a toggle switch which has the menu button and the lightning bolt if the legends on it are to be believed. This functioned as a back button in my testing. There are two LEDs one above and below the buttons. The bottom by the power button shows the power status and the top lets you know the battery bank power level.

Here is another look at the included cover/stand when it is folded out. I already mentioned it, but the close up is of the two bumps for the magnetic attachment points at the side and bottom of the monitor. The picture below that shows it in use as the screen cover and it does a great job attaching from the mounting bumps then wrapping around the end. The side edges where the controls and all of the I/O are all covered as well as the entire front glass. 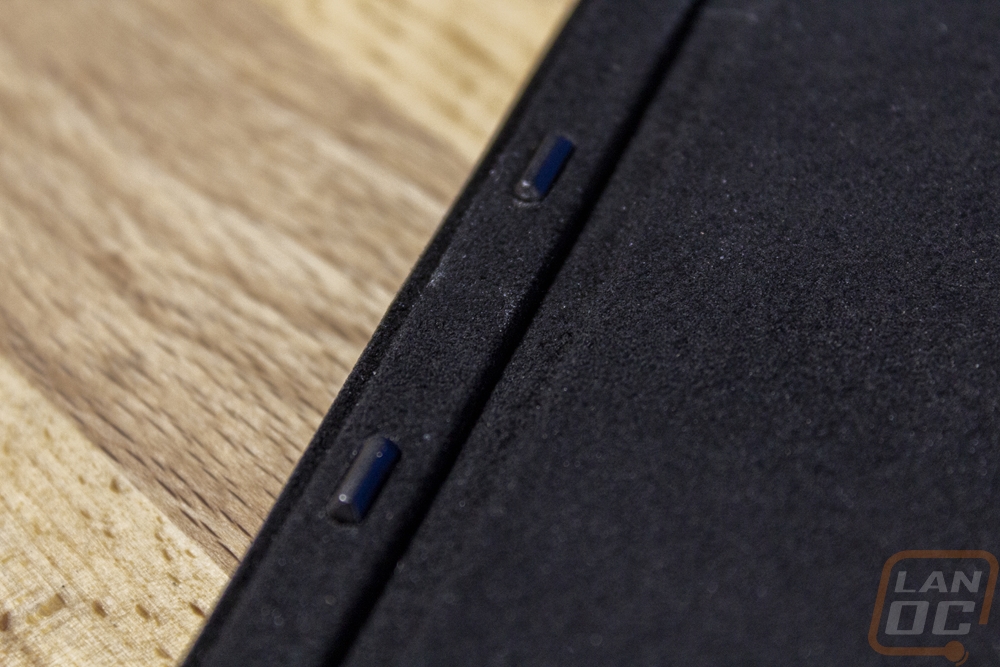 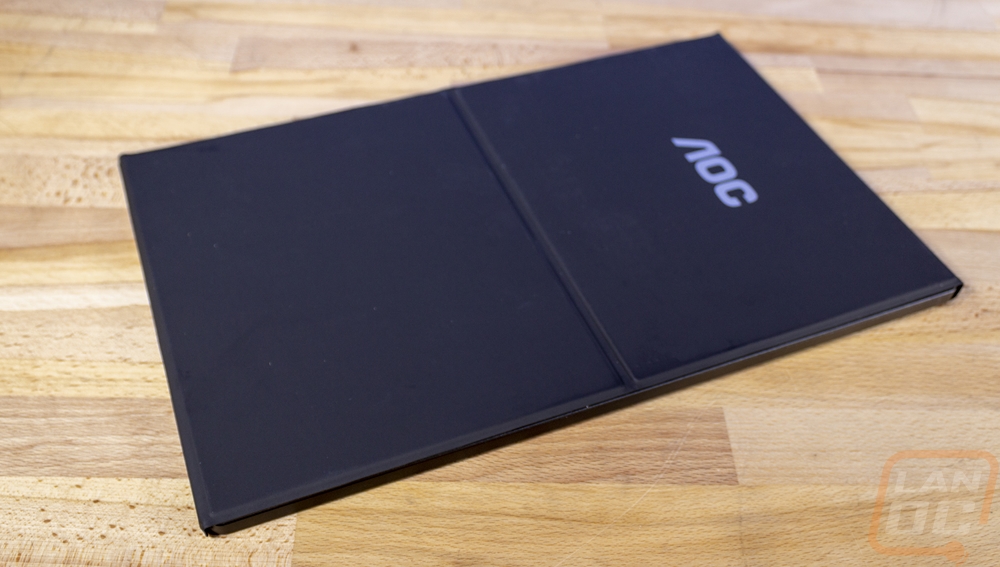 Then here is the stand-in action. It mounts to the bottom of the 16T2 and folds halfway to hold the screen up to whichever angle you prefer. You can run it all the way down at the bottom or near the top and it will still hold, changing your angle depending on what you need. 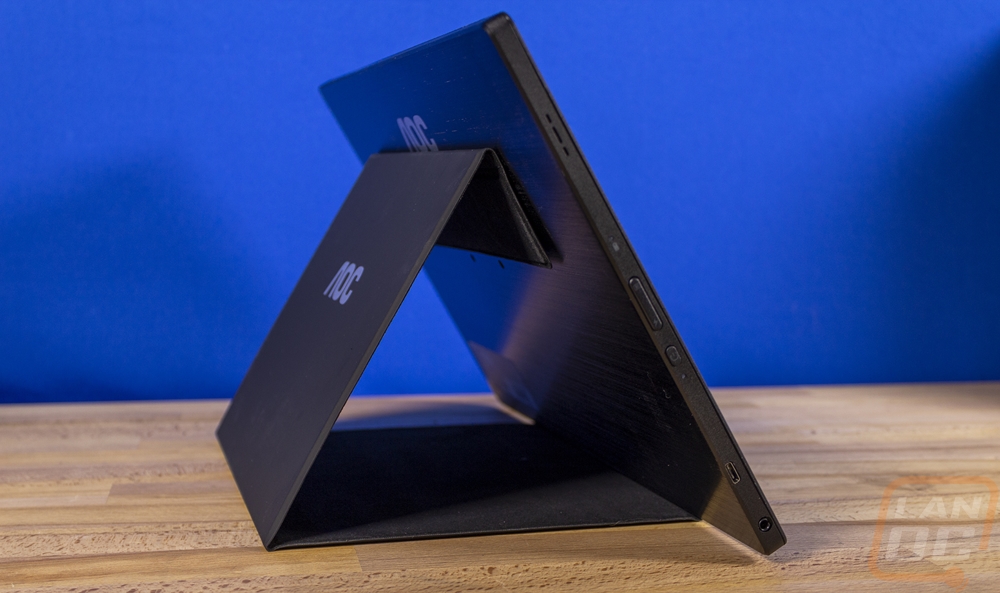 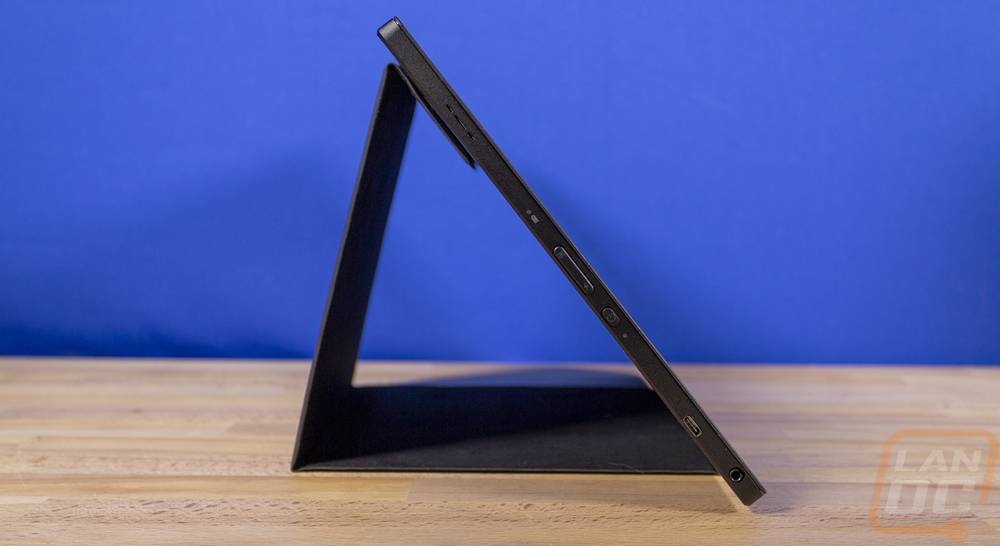 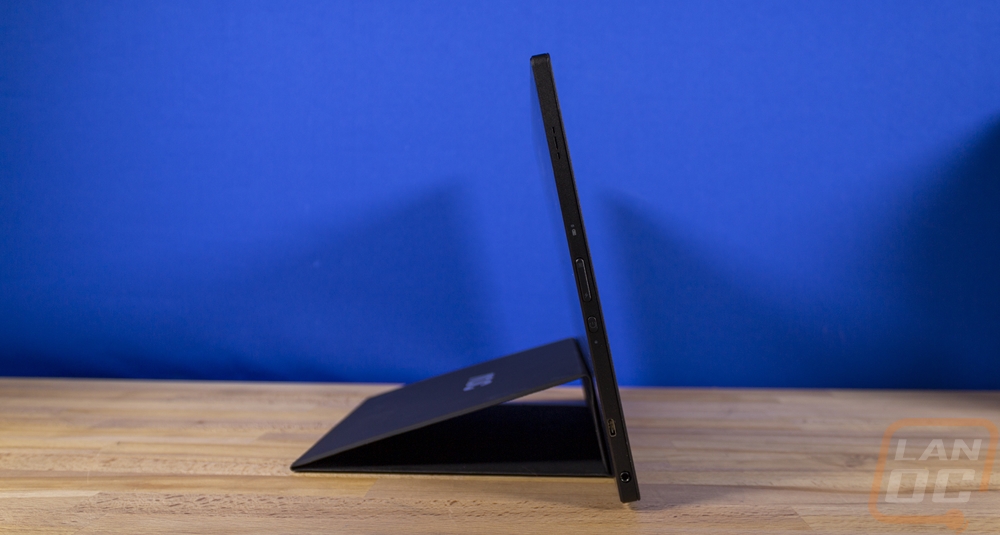