Case modding is something that gamers’ have done to their system since there has been a reason or opportunity to show them off.  It is a chance to set your system apart from all the others that may be around.  The case modding scene has grown in the past couple of years and has seen a wide range of products for both expert and amateur modders.  Today we take a look at the Alchemy Connect LED-Strip lights from BITFenix. 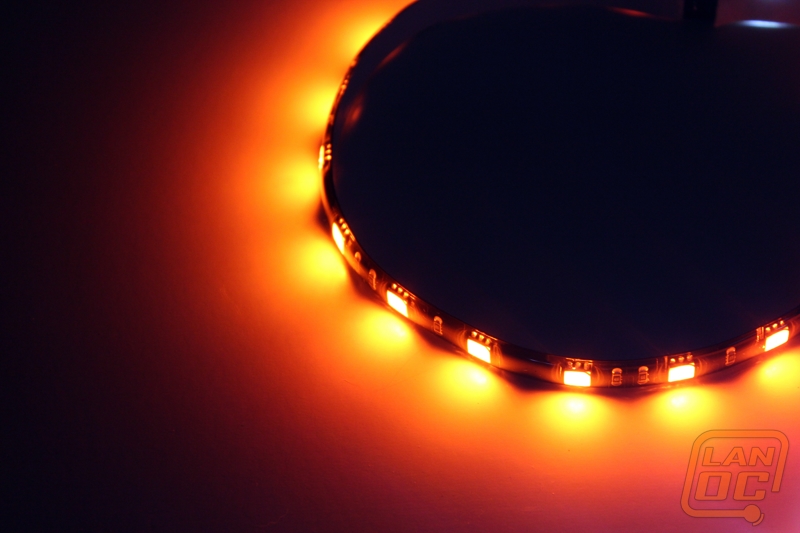 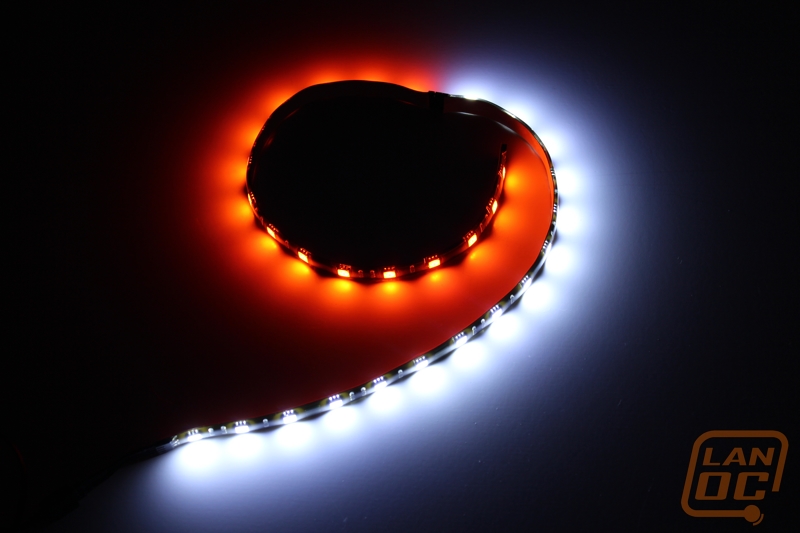 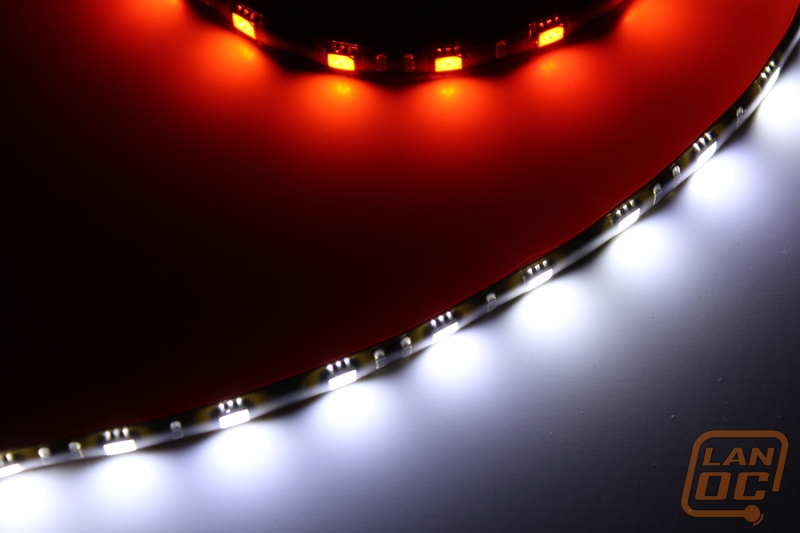 The Alchemy packaging was clear and protected the product well. You could see exactly what you were getting with the product so there were no surprises.  Additionally, the package was easy to open and close, as well as being rather sturdy which allowed it to be reused for storage purposes. On the back of the packaging there is some basic product information. 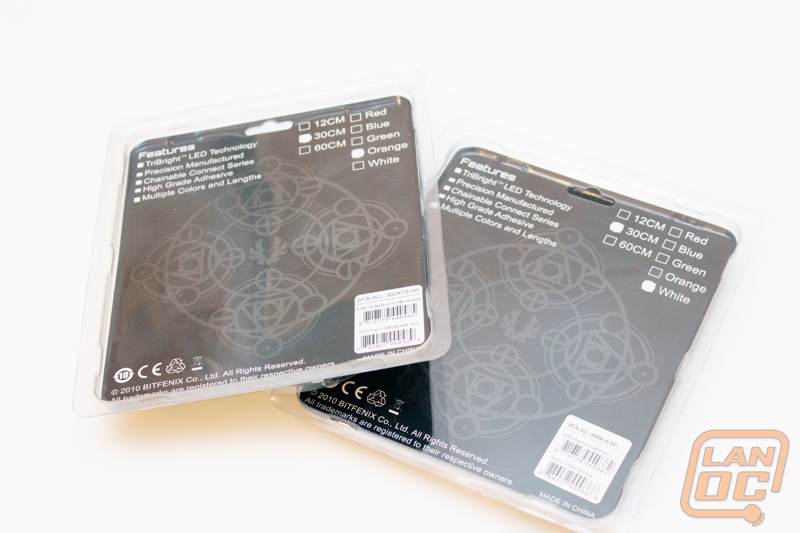 After removal from the box, I laid out all the parts to see what goodies would be inside, and what I could use being only an entry level modder. 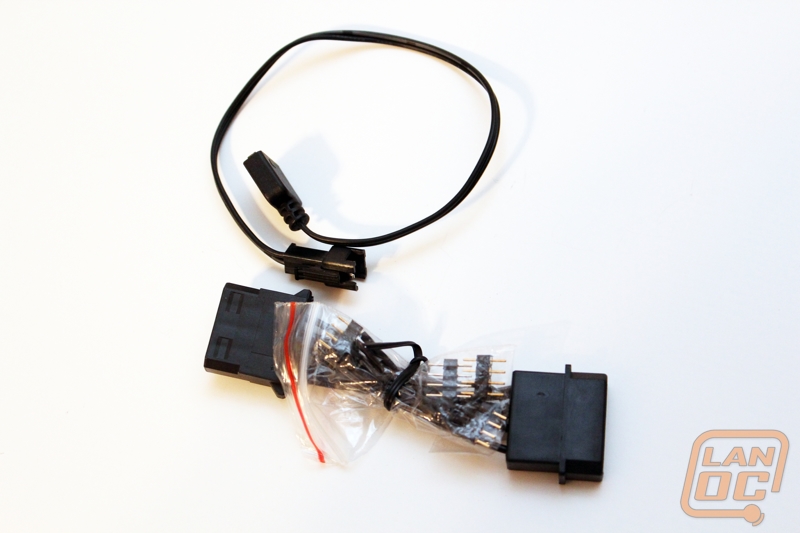 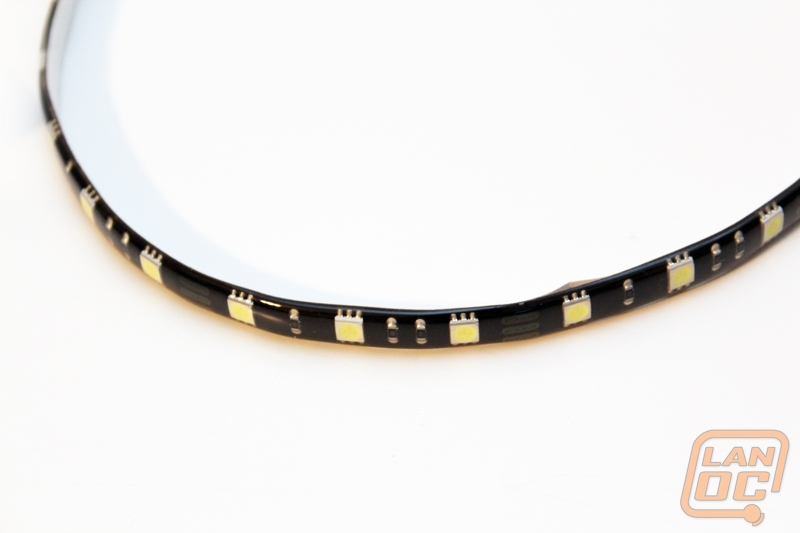 I see from the contents that you can connect two strips together to form a long chain as at either end of the strip were female contact holes. There was a +5V pass-thru connector as well so you could daisy-chain it to an existing power plug if needed.

I chose to install the orange LED strip first. I positioned it at the bottom of the case flush against the windowed door side. I left the internal blue fan powered on for the first strip insulation. To install you just remove the white strip on the bottom and there is sticky adhesive. I would imagine that over time if you perform multiple installs and removal's you would need to provide more adhesive. 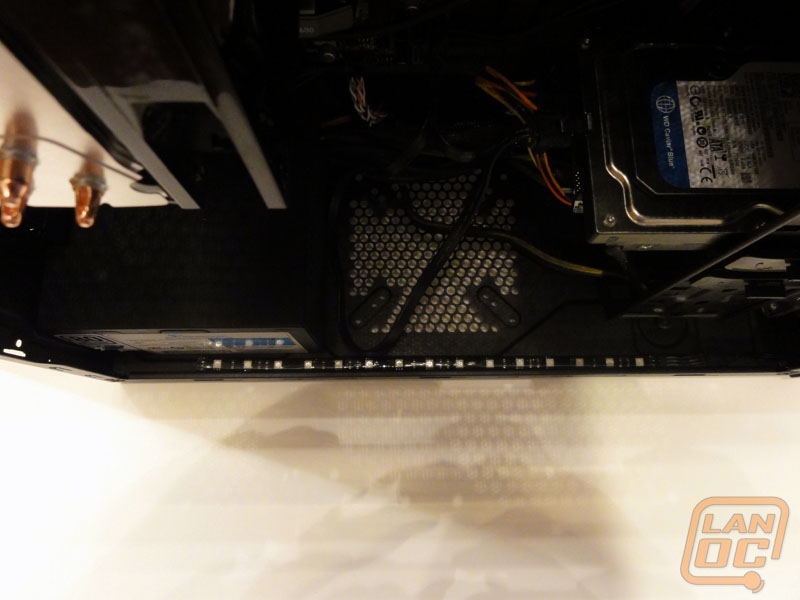 I then powered up the system without the LED strip plugged in as a reference point to what lighting effect the case had in stock form. 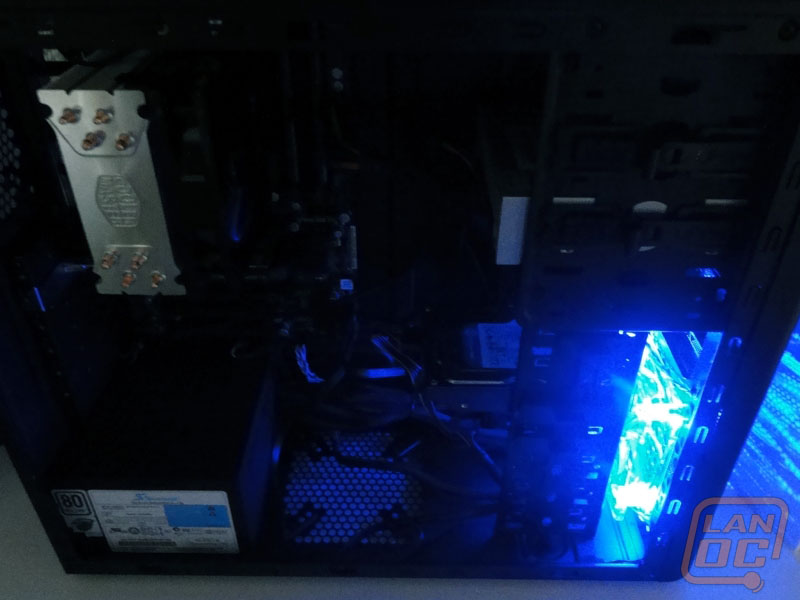 Next I plugged in the Alchemy LED strip to see how the orange and blue blended. 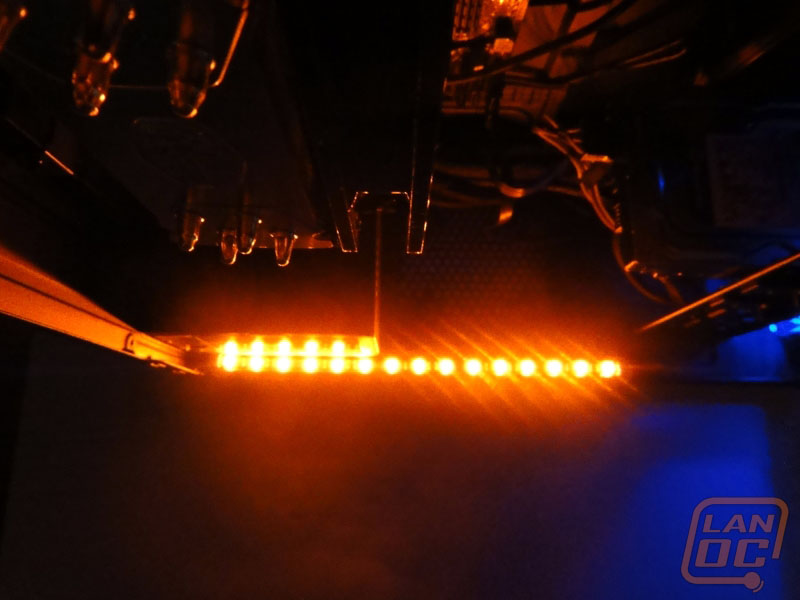 As you can see from this top down photo the LED's are fairly bright and they almost overpower the stock blue front fan on the Cooler Master case. The orange and the blue actually contrast nicely off of each other and make for a wonderful overall visual. In the next photo you can see a side shot with the windowed door left off. 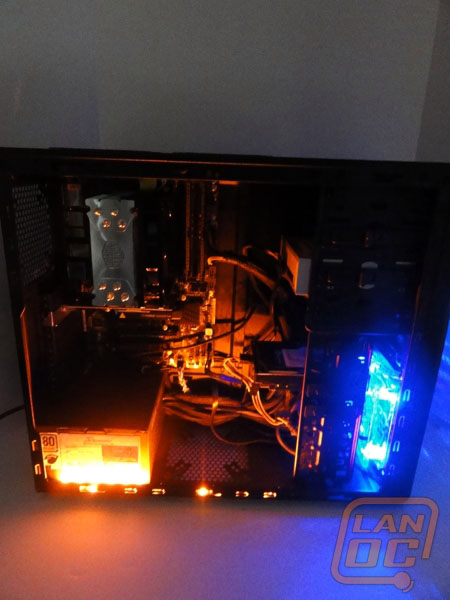 These little orange LED's certainly do give off an ample amount of light for how small they are. Next I placed the windowed door panel on the case and took a photo of that. As you can see, from just this one strip the entire case has managed to light up. 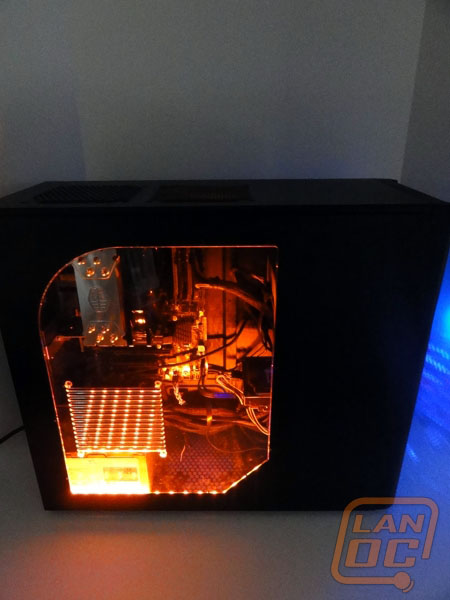 With the panel on, it shows off a noticeable orange glow in the case and keeps the blue fan focused solely in the front of the unit. This was a bit of shock to me but then again I have never installed or used LED lights so I didn’t know what to expect, but it was surprising to see the luminosity they gave off. I next installed the white LED strip on the front side of the case, vertically. 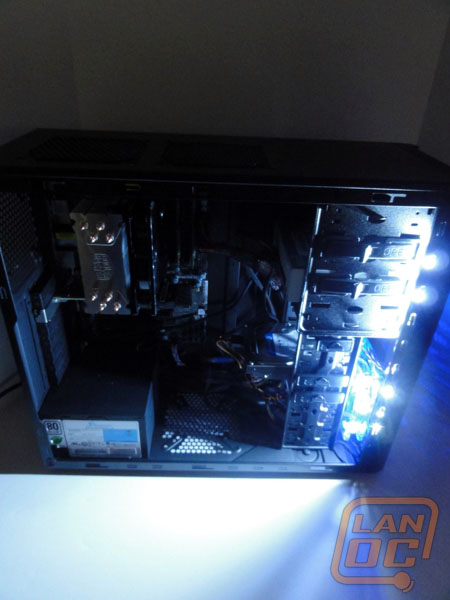 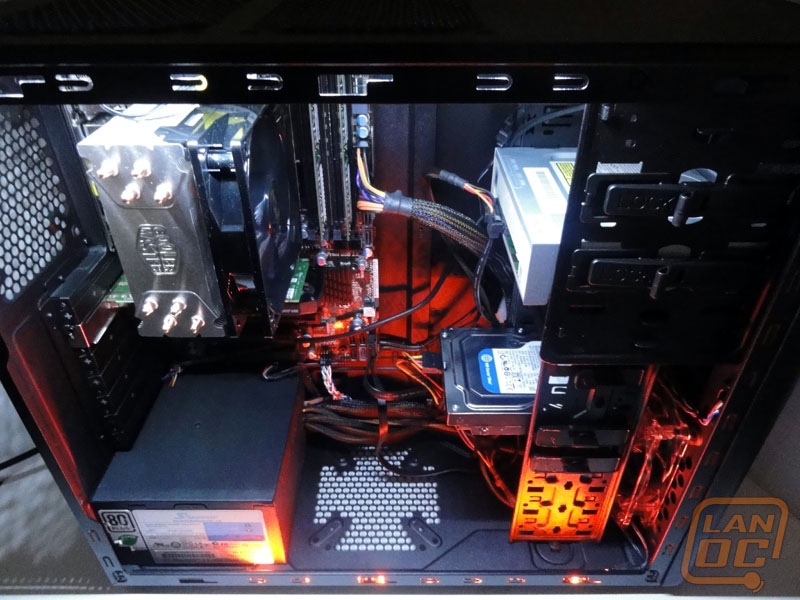 You can see from the photo that the white and orange actually don't blend together all that badly. The white LED's installed on the top part of the case do a nice job of showcasing the CPU cooler. I feel like another color combinations could also be cool and exciting, personally I was a fan of the orange and blue combination from my fan and the bottom LED light strip, but I am unsure how that would work with two different LED strips. Granted my wire management leaves a little to be desired, but it does still show the effect of an overall clean install. 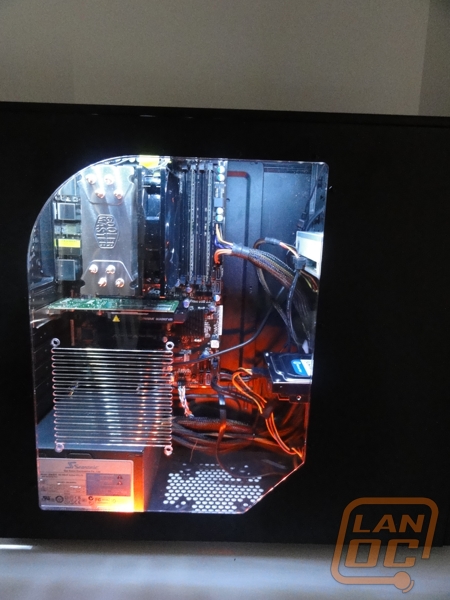 As you can see the white LED's overpower the orange and almost render them non-existent.  If it was not for the power supply and the back of the case, you would not be able to see the orange at all. It would be recommended that you just install one set of LED's to get the effect that you want instead of both sets unless they were of the same color. 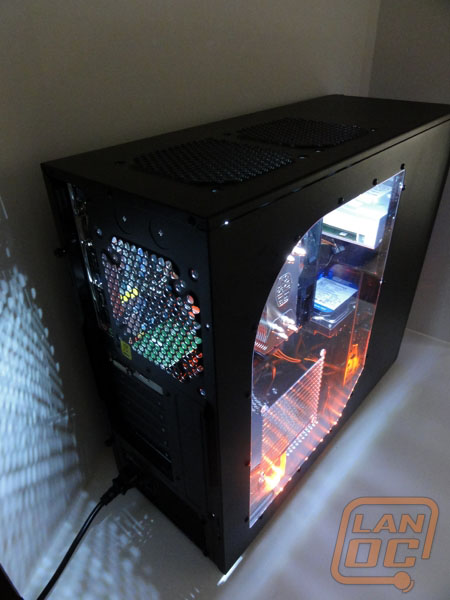 In the photo looking from the top down across the case, you can again see the white is overpowering compared to the orange. The white LED does do a better job of showing your case components so if that is your goal then I would recommend you use the white LED's.  The orange LED would be to provide accent lighting in your case as part of an overall theme, say for a Half-Life case mod.

At first I did not expect to be impressed with the Alechmy LED lights. Once I got them installed, I was impressed and excited about how they light up the case and were able to be installed discretely. While I did have trouble at first with one of the wires popping out of the connector, I was able to overcome that and swap them around as needed with no further issues.  It would have been nice to have matching color sets to put on the top and bottom of the case but I think you can see from the installation photo's, these lights are small but pack a powerful punch. I would recommend these for all levels of case modders, but imagine this is focused on the entry to mid level modder due to the ease of install and design. 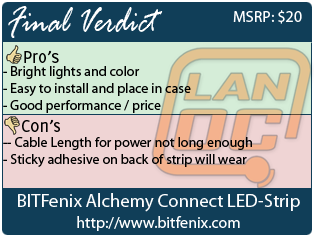