We have all run into the issue at one point or another, you are running on Wi-Fi and you have a perfect signal all the way until you get to where you need to be and BAM nothing. I run into this issue when trying to work at the back of my house on the patio as well as in my bathroom. This prevents me from streaming music in the bathroom when needed and from working outside on nice days. A big portion of this is the placement of my router, but due to where my cable is installed it’s not really an easy fix. When I heard about EDIMAX’s new Wi-Fi extender, I was excited that I might have finally found an easy fix. Let’s take a look at what it’s all about and see if it was able to take care of our problem! 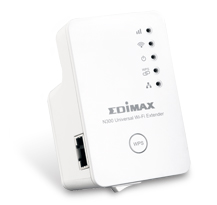 The packaging for the N300 is simple and informative. Right on the front you have all of the details on how the device works, including a three step guide on how to set it all up. Along the bottom there are details about how the N300 can help you find the best location for optimal Wi-Fi coverage and its hardware WPS button. Around back all of the same information that was listed in English on the front is repeated in multiple languages. Inside it was actually surprising to see how small the N300 was compared to the size of the box. Along with it you get an Ethernet cable for setting it all up and documentation on how to set everything up. 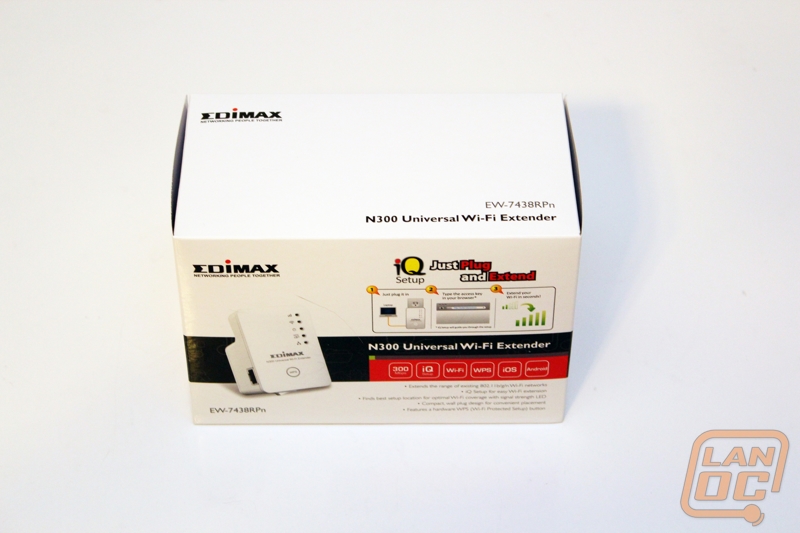 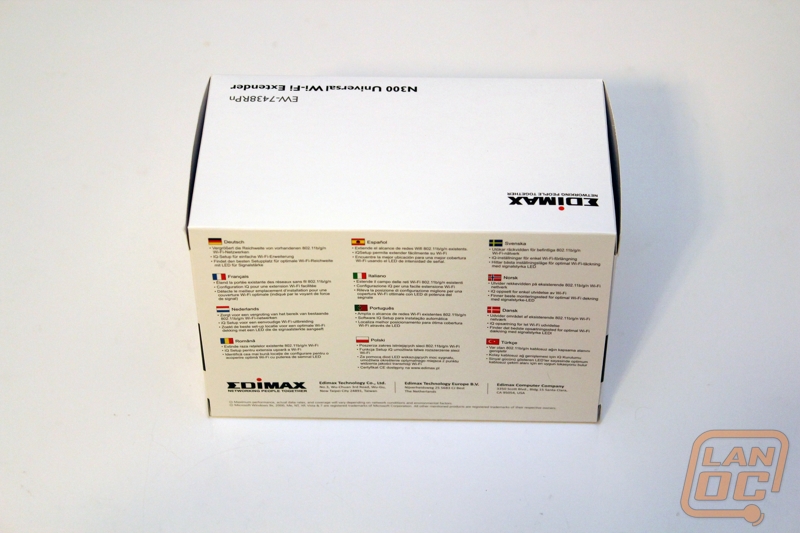 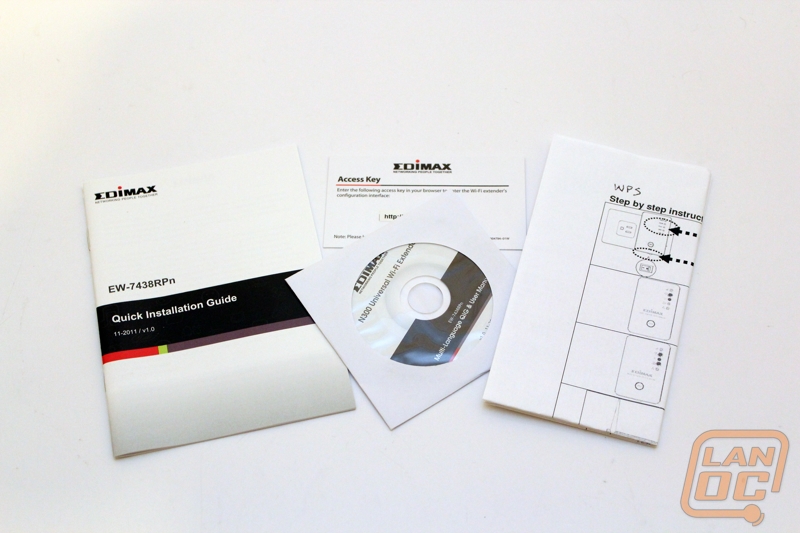 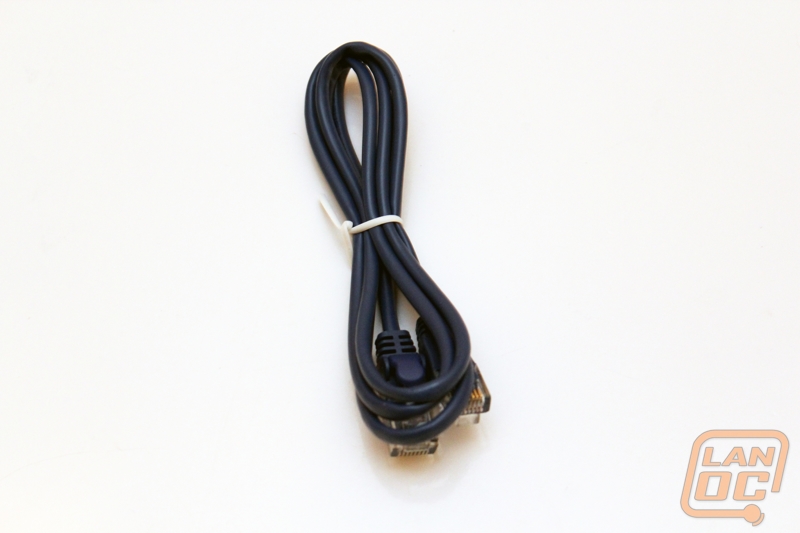 You have two options when setting up the N300 with your wireless. You can setup your wireless by connecting to it using the provided Ethernet cable or you can use WPS. WPS is by far the better of the two options for various reasons including being much easier. But it also has the side effect of working better with your router by sharing the same access point name even. Unfortunately, I wasn’t able to get WPS to work at all with our Netgear router. This left us with the only other option where we had to plug our laptop in via Ethernet and configure everything. This was actually much easier than I expected when it was all said and done.

When you log in it actually even gives you the default username and password, because of this it will be important to change the password later on for obvious security reasons. 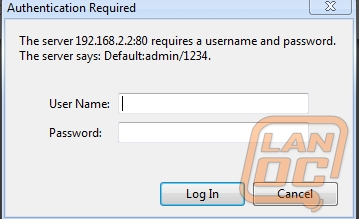 The opening screen gave me the two wireless networks that the N300 picked up along with their channel, encryption, and signal strength. You can also manually enter all of this if you would like or if your SSID doesn’t come up.

Once you select the wireless network you would like to use and enter your password it will start a connection test to confirm that everything is setup correctly.

Once everything is setup you can take the N300 and plug it in towards the end of your wireless network’s range. Using the lights on the front you can check the signal strength without having to hook a pc up to it at all. 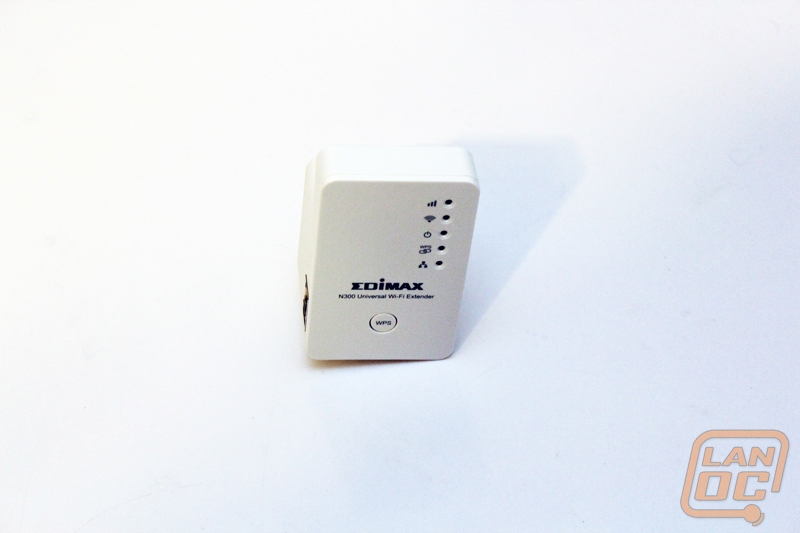 To put the extender to the test I ran speed tests over our normal wireless and then over the extenders wireless. Along with this I also tested our now extended network. First and most importantly can we pick up our net network in the bathroom and in the back yard? Yes we now have coverage all the way across our back yard and in the bathroom, perfect for getting work done while enjoying nice days. 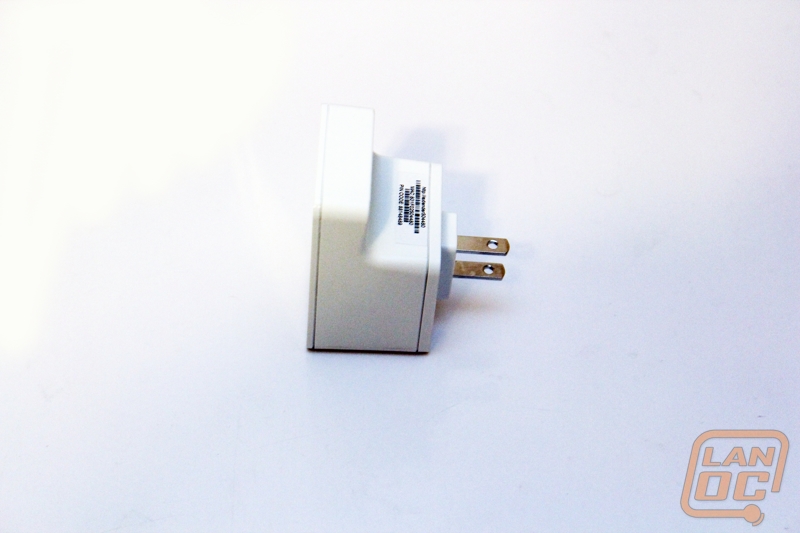 Testing the performance did bring up an issue that we didn’t expect. When the N300 is running the overall network speed over wireless in the house drops from 50 down 5 up to 16 down 5 up. This seemsto be a compatibility issue with our Netgear N600 WNDR3700, firmware on both devices are up to date. Even though this is a major issue, the speeds I experienced are still more than enough for me to get my work done from the back yard. It is still an improvement over no internet at all, and for those with a typical roadrunner or roadrunner turbo connection you will never notice the slowdown. It only became an issue when using a much faster connection. 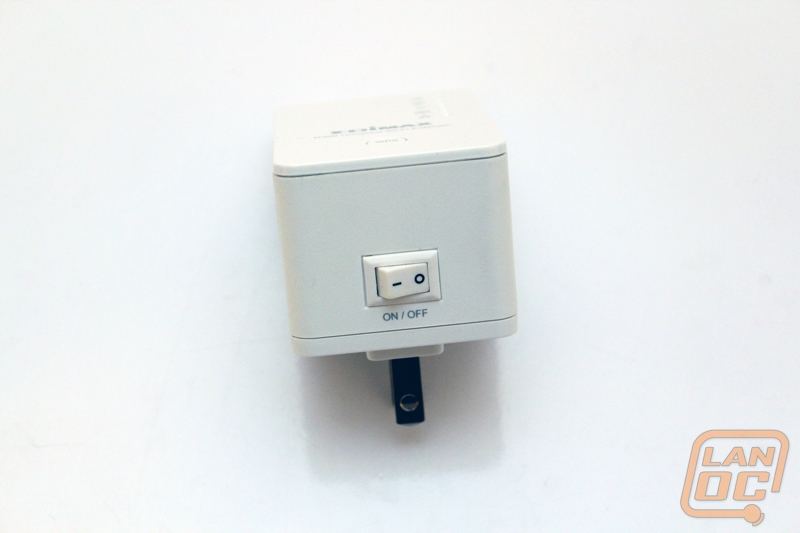 Last but not least, we took a look at the interface now that everything is setup. You actually have a lot of options for such a small device. While poking around I was shocked to find options for DHCP for example. This could come in handy while traveling; you can actually turn this extender into a small router to share a single internet connection from a phone or even hotel wireless. Even with the speed issues, I would still seriously consider packing this device for CES where you have to pay PER device connected in some hotels. 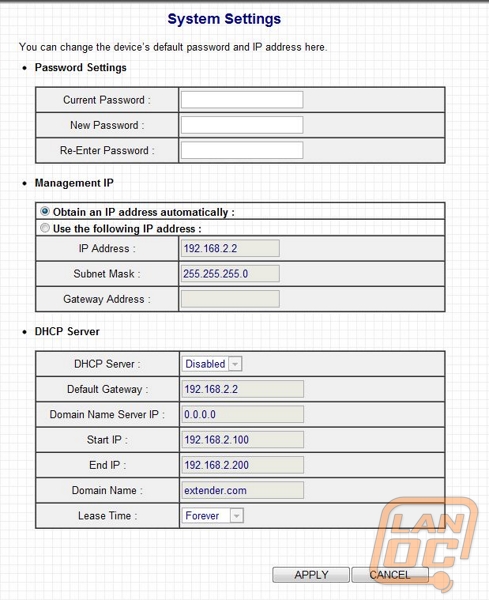 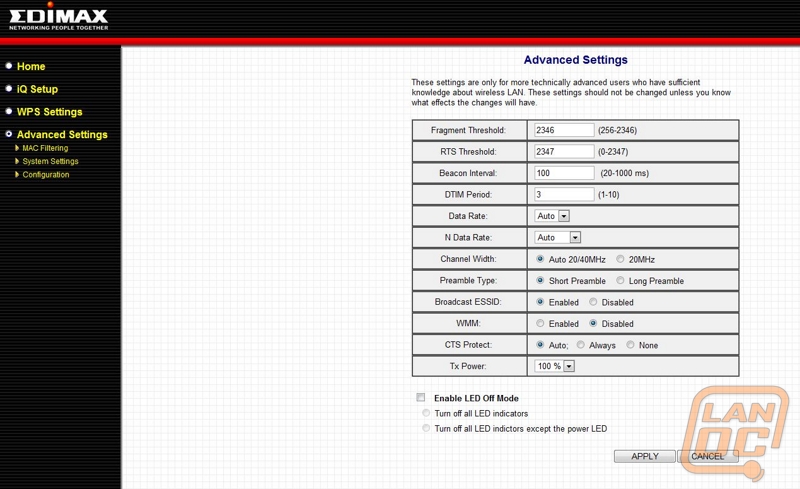 Although the N300 was easy to setup, we did run into a couple issues that could cause you to question this as a purchase. Not being able to setup WPS was a bummer and I think had we been able to set this up we may not have had the speed issues that we ended up having. Those speed issues ended up being a major issue considering my high speed connection. Limiting my 50 down 50 up Time Warner wideband connection down to 16 down and 5 up left me with a connection that wasn’t much better than Time Warner Turbo. For someone with a slightly slower connection this would most likely never be an issue unless they were looking at file transfers over the wireless. Even in my case I was still able to perform the tasks needed out back in my yard while enjoying the weather, once I was done I turned the N300 off using the switch on the bottom and my connection was back to normal. Hopefully EDIMAX is able to resolve this issue with a firmware update; otherwise it’s a great device. Its small size keeps it out of the way and easy setup makes it useable for everyone. As I mentioned before, the inclusion of DHCP support means this can also double as a small travel router if needed as well. At Less than $40 bucks, it wouldn’t be a bad choice for both a travel router and a way to push your network out into a backyard workshop or around the pool. 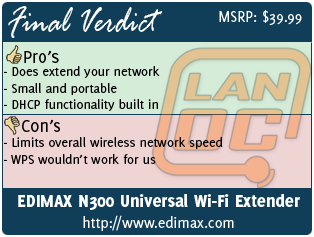 You might call him obsessed or just a hardcore geek. Wes's obsession with gaming hardware and gadgets isn't anything new, he could be found taking things apart even as a child. When not poking around in PC's he can be found playing League of Legends, Awesomenauts, or Civilization 5 or watching a wide variety of TV shows and Movies. A car guy at heart, the same things that draw him into tweaking cars apply when building good looking fast computers. If you are interested in writing for Wes here at LanOC you can reach out to him directly using our contact form.
Discuss this article
Log in to comment
Posts in discussion: EDIMAX N300 Universal Wi-Fi Extender

We have 1080 guests and no members online