When you are looking for a fast and easy to use PDF reader you may come across a company called Fox-It. They make a fast, if not the fastest PDF reader; you can say they do a better job with adobe PDF files than Adobe themselves. When I found out last year that Fox-It was bringing out an e-reader, I was excited to see if their PDF knowledge would improve on the already great e-reader.

Fox-it's first e-reader was packed into a simple white packaging. On the front there is a picture of the eSlick along with "$69 Value" in bright orange showing off the included Fox-It software. On the back there are a full listing of specifications and a list of everything included in the packaging. Inside the eSlick itself is right on top but wrapped in a foam bag to prevent any damage while in shipping. The USB cable, headphones, software, and paperwork is hidden under the eSlick. The packaging overall is nothing amazing, but it does a what it needs to do by having all the needed information and protecting the eSlick adequately. 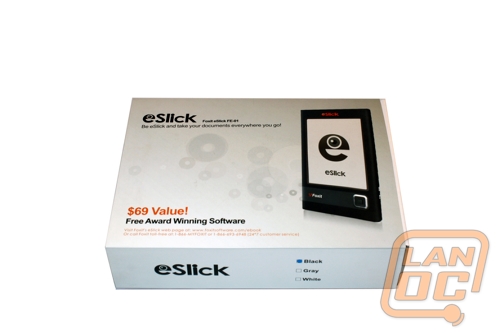 There is only one way to test an e-reader and for people who know me it may come as a surprise. I have to read. A lot. Having just seen the movie "I Hope They Serve Beer in Hell" I decided to reread Tucker Max's book. Not only is it a chance to make myself feel like less of an asshole (at least in comparison), it also gives me a reason to play around with the eSlick. To go along with the book I loaded up a few mp3's to listen to while reading; Yes, I loaded mp3's into a book. 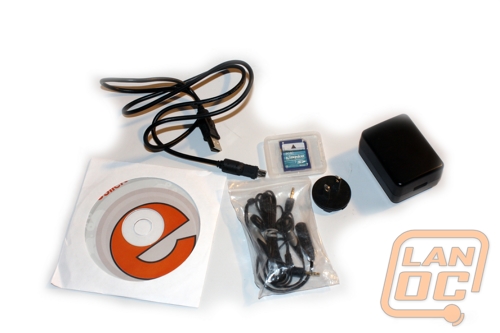 With everything loaded up I took about a week of reading during my free time to finish the book. E-readers are known for their long battery life so it wasn't a surprise that the eSlick didn't require a recharge for the entire week. It was a surprise however that after just over 450 pages the eSlick needed a charge. After looking around I found that battery life was corrected with a firmware update, after updating I jumped into a new book "Predictably Irrational".  The updated firmware made all the difference, even after reading the large book the battery had 3 or 4 more books left in it.

The screen itself was very easy to read, just like reading a book. The lack of any backlighting is much easier on your eyes, although it also means if you want to read at night you need a light on. Pages refresh quickly when you flip through them. One of the best features of the eSlick is its PDF handling. When viewing a PDF you can zoom and move around wherever needed, or you also have the option to reflow the text to fit the screen. With the text reflowed when you zoom the text gets larger and easier to read while still fitting the screen perfectly. 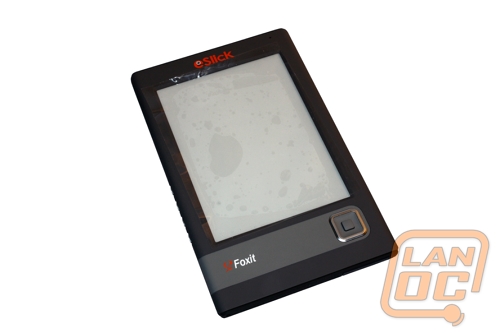 So after making me a reader again (Ugh), I spent more than enough time with the eSlick. With this being my first experience with an e-Reader I was impressed with the idea of them and excited to see what we will see in the near future. Of course the eSlick was easy to use and did an adequate job. I was disappointed that I had to run a firmware update to fix the battery life issue, I hope that this is fixed on shipping models because the average user will not be able to do the update themselves. Even with the built in MP3 player and amazing PDF support it was hard to not get the feeling that this is only an average example of an e-reader. I hope to get my hands on a few other examples to verify, but I can only recommend the eSlick if you had a need to read a lot of PDF documents. Other than that I would look at better features or lower priced models from other manufactures. 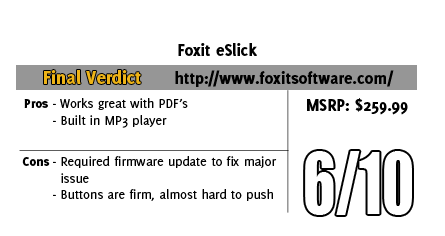 You might call him obsessed or just a hardcore geek. Wes's obsession with gaming hardware and gadgets isn't anything new, he could be found taking things apart even as a child. When not poking around in PC's he can be found playing League of Legends, Awesomenauts, or Civilization 5 or watching a wide variety of TV shows and Movies. A car guy at heart, the same things that draw him into tweaking cars apply when building good looking fast computers. If you are interested in writing for Wes here at LanOC you can reach out to him directly using our contact form.
Discuss this article
Log in to comment
Posts in discussion: Fox-it eSlick