If you've been an avid reader of LanOC Reviews, the name Killer 2100 should be somewhat familiar. And if you follow hardware news and press releases, then you're probably as excited about this review as we are. Maybe it's because we've been the victims of automatic updates killing in-game performance too many times, or perhaps it's the idea of being able to control and prioritize applications that appeals so much to us as LAN party hosts. Whatever the reason, we've been covering BigFoot Networks and their Killer cards for quite some time now, anxiously awaiting our chance to try one out for ourselves. With the launch of the new Killer 2100 card, we finally received one to put to the LanOC test.

Packaging
BFN has packed the Killer 2100 in a small carton box that featuring what I assume is the company's new mascot, much like Ruby is to ATI. On the front of the packaging you'll see a combination of different action shots featuring this character, as well as a small description of the product.··· 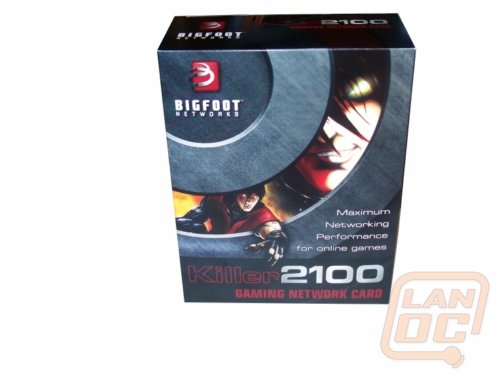 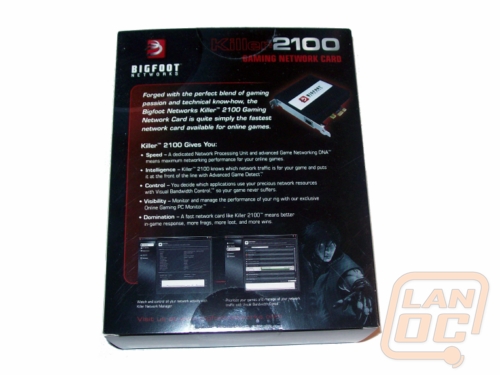 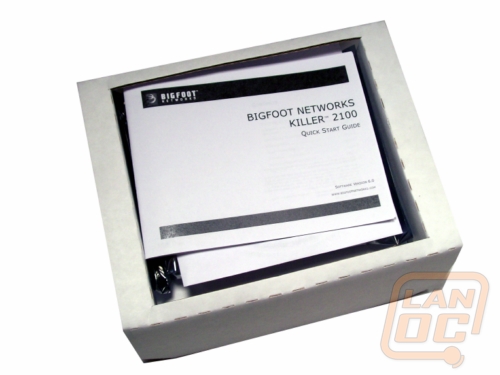 Installation
Equipping your PC is no harder to do than any PCI expansion card. As you'll come to discover, a large part of the 2100 package is the software that's included, so naturally installation and set-up will consist of two parts. The obvious installation of the NIC into the computer presents no issues, ease of access depending more on other hardware (such as your chassis) than the card itself. Bigfoots has made the facade of the 2100 a simple box shape, which appeals to my practical side. Though no large 'K' shaped bling is featured on this card, Bigfoots had included an LED for a glow that appeals to the enthusiast builds. 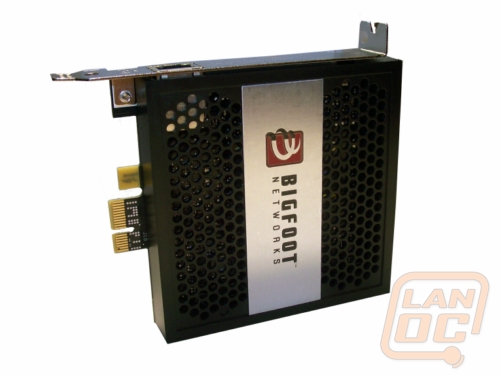 For the depth that the software suite contains, set-up is actually pretty painless. After the initial install, a one-time scan will test your connection and upload the information straight to the interface. The user can then switch between an Overview, PC Monitor, Applications, as well as Network settings and Advanced, of course. The Overview is where you can find all the info from your system properties and the scan you'll encounter early on. You'll also see a live monitor of the network processor and a graph for bandwidth. 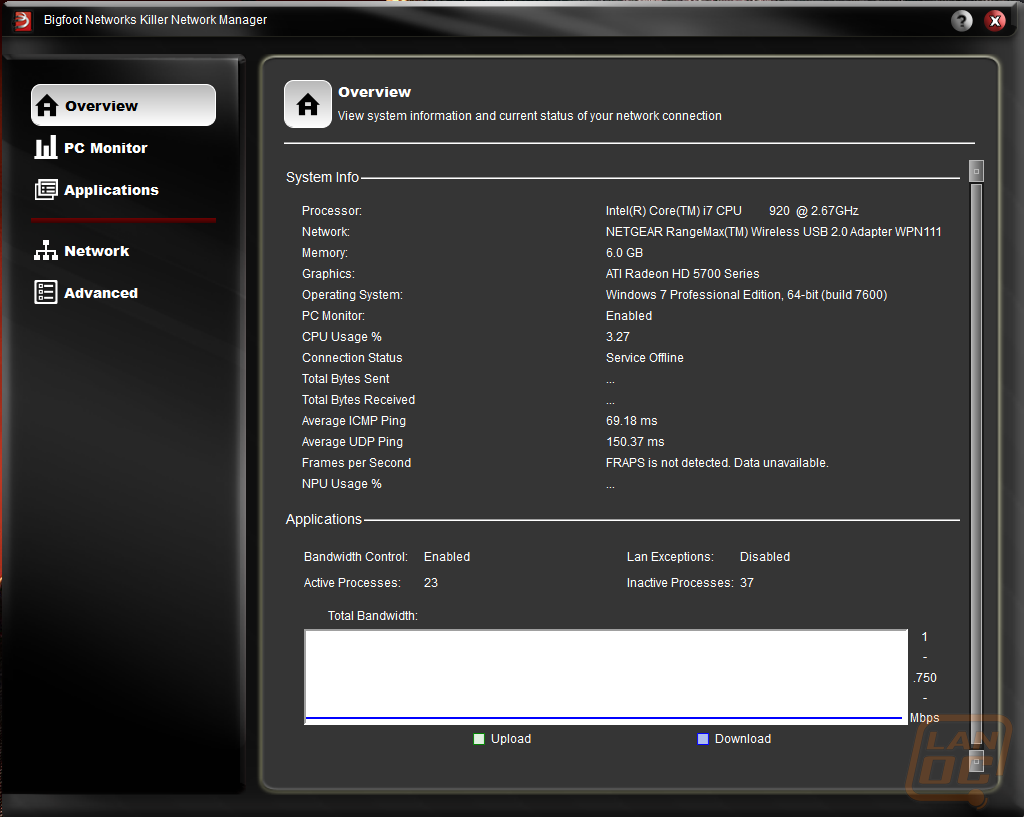 The PC Monitor tab expands that graph, creating a constantly updating, time-stamped line graph the better size of the window. Several types of information can be viewed here, such as ping, FPS, and Internet bandwidth. It's easy to see why this kind of a data is so valuable, especially for online gamers looking to monitor and tweak performance. 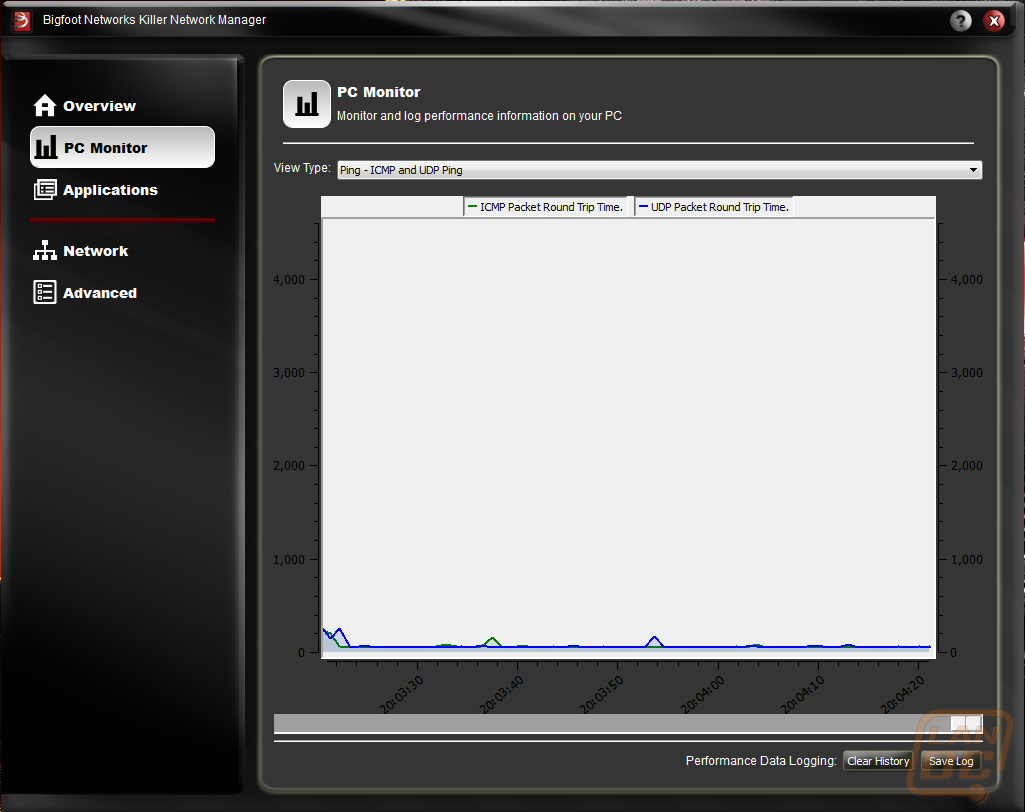 The Applications tab provides one of the greatest senses of controls, and one that has been almost unattainable in the past. Here you will see a list of applications that utilize the network. The ability to allow or deny a perticular app is in your hands. You can also see a line graph read out of bandwidth from this screen. 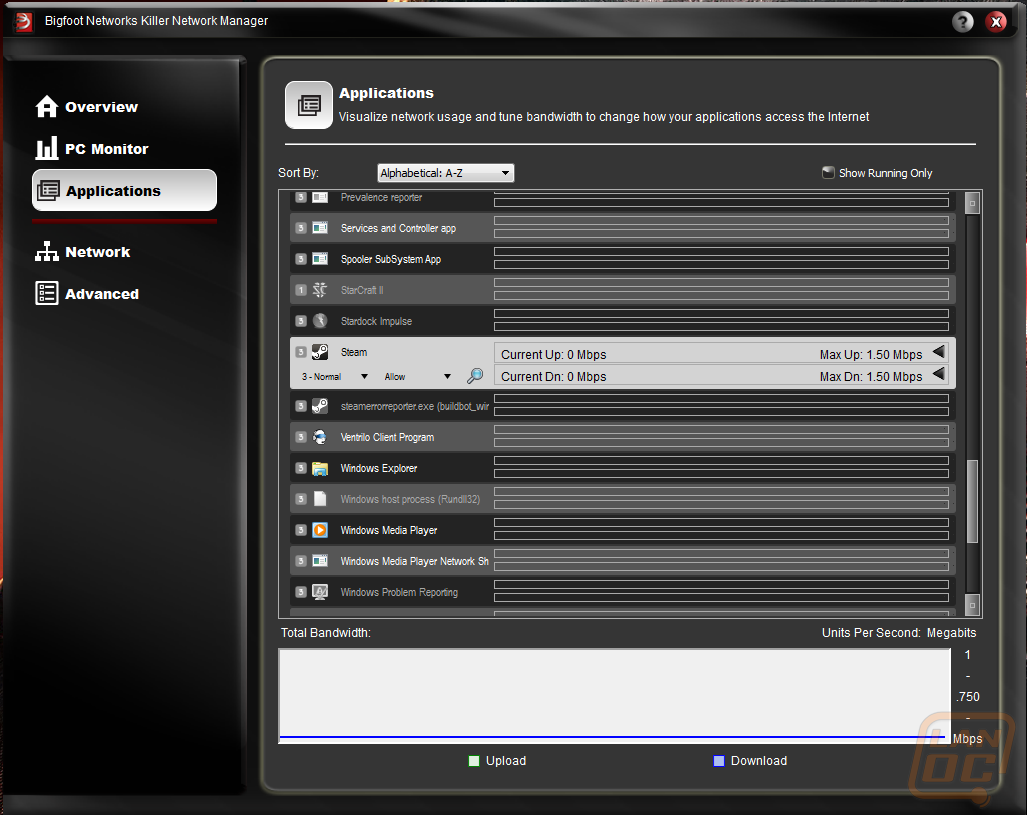 The Network and Advance tabs provide the user with a chance to configure basic settings, such as the network connection, speed, and global settings. You can also toggle the LED glow on or off from these menus.

Performance
The technology behind the Killer line is really what sets them apart from other NICs, and is even more the case with the 2100. BFN has focused on three main areas with the newest entry to the series: speed, intelligence, and control. Given that Bigfoot was established primarily due to the need for a technology that took gaming performance into consideration, the first factor is a given. Using a method called Game Networking DNA, a processor dedicated to to the network relieves the CPU of the load and completely bypasses the Windows Networking Stack. This is a critical step since Windows doesn't care whether you're playing ranked matches in StarCraft 2, it will still throw any other packets of information into the mix, which is when you see hiccups. Gaming network activity is classified using Advance Game Detect, which puts your game at top priority, ensuring that information packets pertaining to your gameplay aren't put behind of Adobe automatic updater.

The control aspect is one of the newer and perhaps underestimated features of the Killer 2100. Some patrons of BFN may have already had a taste of the idea with the recently launched dashboard application, which allows for the monitoring and management of network activity. The PC Gaming Monitor builds on the idea, bringing visual representation of performance to the user and allowing them direct control with applications such as the Application Blocker, which gives the ability to say yes or no to each individual program installed on the PC, such a Steam updates.


The Test
We've been looking forward to getting an opportunity to test the Killer 2100 since it's launch earlier this summer. Our testing procedure included several means and methods in an attempt to get the best idea of performance in every situation. The first, and perhaps the most obvious, was actual transfer tests comparing systems equipped with the Killer 2100 against a standard onboard NIC. This procedure incorporated actual game performance, using a Game Networking Efficiency test, as well a throughput testing and Real-World file transfer. 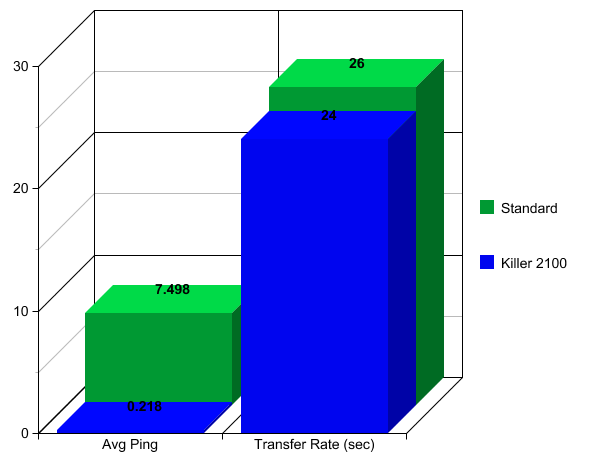 The software suite, including the Gaming Monitor and control panel was another aspect we wanted to get a feel for, a tool that we quickly gained an appreciation for. Being able to monitor network use and set priority to applications or even web usage was a great power, especially for LAN hosts such as ourselves. With many popular games now requiring a constant connection to the Internet even for LAN play, it is quickly becoming necessary for a way to hold performance amidst the plethora of other network activity that goes on at these parties.

Overall
Having read the results of similar tests, some with results 33x in performance, and finally testing the technology for ourselves, there is no doubt that the Killer 2100 is an outstanding addition to any gamer's system. When you combine a library of games that require an active internet connection with the shift towards digital distribution, even for application upgrades, being able to control what does what when is quickly becoming a must, if we haven't reached that point already. The Killer 2100 does this and more, while keeping the spirit of the online gamer. My only complaint about the card was the price, which used to be $129, but recently saw a $40 price drop to bring the card under the triple-digit mark to a much more reasonable $89.99. 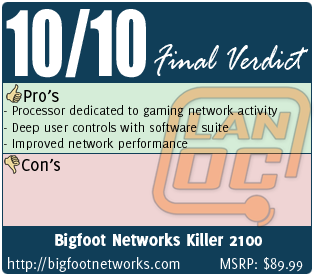 Author: Lersar
Contributing Editor / Event Staff
Adam is a big proponent of LAN parties, esports and speed-running, and helps organize our semi-annual LAN events. He has covered hardware and software reviews of a wide variety, but most content these days come from event coverage, such as other LAN parties.
Discuss this article
Log in to comment
Posts in discussion: Bigfoot Networks Killer 2100

We have 1321 guests and one member online