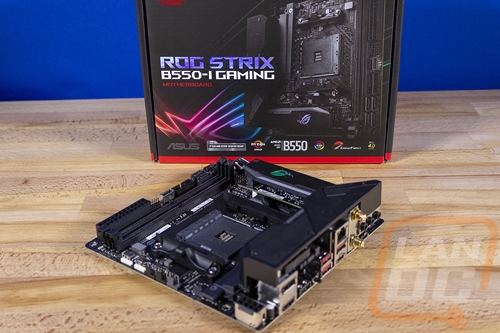 As I mentioned at the beginning, the launch of B550 is big because it can finally offer options for those who want improved VRMs and PCIe 4.0 without having to throw down for X570. The B550-I looks in a lot of ways like a higher-end board. Especially when it comes to having an upgraded VRM, the 8+2 configuration isn’t huge, but for an ITX board, it isn’t bad at all. PCIe 4.0 does mean you don’t have to worry about faster video cards and M.2 drives in the future which is huge. They also packed every inch of space on the ITX board full of headers for things like front panel Type-C without giving up a front USB 2.0 header by integrating a raised breakout board for one of the two M.2’s and the onboard audio. They also packed the VRM cooling into the rear I/O including active cooling. But that also did lead to one of the board's downsides as well. There just aren’t enough USB ports in my opinion. You get four Type-A ports, three of which are USB 3.2 Gen 2. A stack of a  few more ports, even if they are just USB 2.0 would be very nice.

It is a small issue but I would have liked to see the rear I/O shield come integrated like most boards have been moving too. I also think that Asus’s wireless antenna could use some improvements given how hard it is to keep it standing up even when using the included base.

Of course, all of this depends on pricing. Asus already has a similar board with the X570-I that has all of the same features and more including having more rear USB ports. The B550-I comes in with an MSRP of $229.99 which is on the higher end for a B550 board. That is normal for ITX boards in general though. The X570-I runs $249.99 when you can find one which makes the B550-I pricing spot on though a little more expensive than the Asrock B550 ITX option which has an MSRP of $199.99. Overall I love the look that Asus has with this board and I like the amount of features you are getting. The USB ports are the only real issue and that will depend on if you think you will need more or not. I know I use more, but some people maybe be good with two or three. You even get a 2.5G NIC which the X570-I doesn’t have. Just like the B450-I, I suspect this is going to be a popular option for ITX builds. 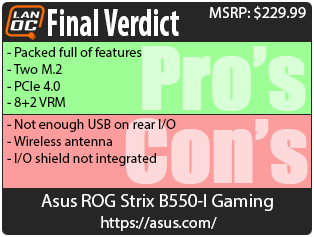 You might call him obsessed or just a hardcore geek. Wes's obsession with gaming hardware and gadgets isn't anything new, he could be found taking things apart even as a child. When not poking around in PC's he can be found playing League of Legends, Awesomenauts, or Civilization 5 or watching a wide variety of TV shows and Movies. A car guy at heart, the same things that draw him into tweaking cars apply when building good looking fast computers. If you are interested in writing for Wes here at LanOC you can reach out to him directly using our contact form.
Discuss this article
Log in to comment
Posts in discussion: Asus ROG Strix B550-I Gaming