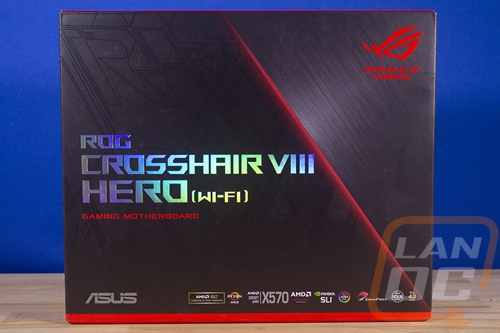 After a nice break after the crazy 5700 and Ryzen launch, I’ve been back at it taking a look at the Asus ROG Crosshair VIII Hero WiFi that I used for the launch. Having taken a look at the Hero boards before I knew I would be happy with this one but I was impressed with what the Hero has become. Back with X370 our Hero board was packed with features and had more USB ports than I had ever seen on a motherboard before. Asus kept all of that, the number of connection options is insane and now a majority of them are running at Gen 2 speeds as well. What they changed, however, was the styling and with that the cooling. All of the X570 boards have stepped things up on cooling and the Hero board is in the upper class of X570 boards. The old Hero boards look old and dated next to this one thanks to a large chipset heatsink that also ties in with the M.2 drives. Combine that with the rear I/O cover that is larger than normal and the large VRM heatsinks and a majority of the board is covered in shields and heatsinks. This makes the Hero look more like the ultra-high-end Alpha and Omega boards, its really only missing the gratuitous lighting and on board screens. Basically, they have cut off the fluff from a high-end board to make the Hero.

Performance testing was impressive, especially when it came to cooling performance. The VRMs were running 30-40 degrees lower than on the last Intel board I tested and the chipset with all of the hype of every board having active cooling was running not far from room temperature for me with that fan helping things. Asus also didn’t’ skimp on VRMs with high-quality VRMs and more than enough to handle overclocking on this board. A lot of the overclocking and water cooling features are on the Hero as well including thermal sensors and hookups for water speeds and temperatures as well as voltage pickups and LN2 overclocking options.

Features like the new 2.5G NIC are finally pushing network speeds forward which is huge, the only downside is that I know now I need to upgrade my own network just so I can test those in the future. I wouldn’t mind a second Type-C connection if I were nitpicking but with 7 type-A gen 2 ports, it really isn’t worth making a big deal about. My main complaint was just that to get to the top M.2 slot you have to remove the fan cover and a mess of screws in addition to the M.2 heatsink. If that is my main complaint for features, the Hero is doing very well. Now on the software side, I am looking forward to updates on the BIOS side. I didn’t run into any lockups or issues but I have heard of others having those issues and the launch BIOS this time around didn’t really help with the higher wattage and higher temp issues. Some of that is on AMD, but it seems Asus is having more issues than most and they are also a little more careful on launching new updates where in the past it felt like they were the first out. Asus does support their BIOS’s a lot longer than most other companies, they are the only one that I can expect to see updates past a year frankly. So they will get things worked out on that front, just like every other Ryzen launch.

My last complaint is more a complaint with X570 boards in general. They have gotten a lot more expensive, they actually remind me a lot of the X299 boards that everyone used to complain about in pricing. You are getting lots of features so it isn’t unjustified and this is an amazing board. But it is going to be a big hit in addition to the other hardware you need for your new build. But would I use it? Well, I decided to use it for our Ryzen testing and in addition to that, this is the same board I am using for our GPU test bench for the next year or two so yes I would still highly recommend it. The only downside is that I won’t get to take advantage of all of those USB ports when using it at a test bench where my personal PC can NEVER have enough ports. I have 10 devices hooked up right now and that doesn’t include anything I might be testing! 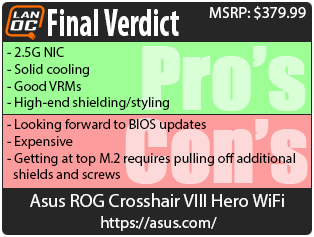 You might call him obsessed or just a hardcore geek. Wes's obsession with gaming hardware and gadgets isn't anything new, he could be found taking things apart even as a child. When not poking around in PC's he can be found playing League of Legends, Awesomenauts, or Civilization 5 or watching a wide variety of TV shows and Movies. A car guy at heart, the same things that draw him into tweaking cars apply when building good looking fast computers. If you are interested in writing for Wes here at LanOC you can reach out to him directly using our contact form.
Discuss this article
Log in to comment
Posts in discussion: Asus ROG Crosshair VIII Hero WiFi

We have 1493 guests and one member online