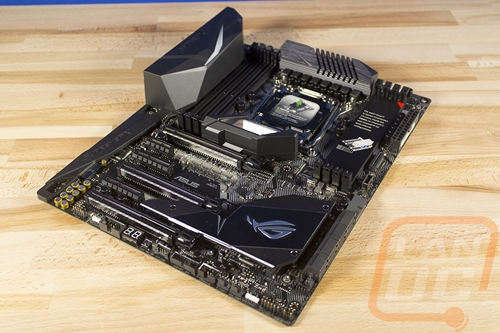 It feels like Asus has got the formula down for solid motherboards. Their BIOS’s and software are always a step above everyone else, then add to that the Strix styling with its color neutral theme and you already have a decent motherboard even before adding in features. The ROG Strix X299-XE Gaming has everything you would expect from any X299 board including PCI and M.2 configurations that take advantage of all of the PCI lanes that the higher end CPUs have. They also made sure you get a lot of the new USB 3.1 Gen 2 connections with a few on the rear I/O and one internal header as well. Being a Strix board it does have all of the addressable RGB lighting on the board including a unique etched block in the middle with ROG etched inside. But it’s the multiple normal RGB headers and the new addressable RGB header that is going to please those who need that RGB goodness. Addressable LEDs are a big step forward because you can now control each LED on the strip independent of the others. So you can do some unique effects, turn off some to cut back on brightness, or just about anything else you can think off. Asus even includes a strip with the board.

Now performance was good in our testing, especially with the wireless, though I would still run wired if possible. But there were a few things I would love to see improve. The biggest to me was the number of USB ports on the rear I/O. You get those fast gen 2 ports but just filling in all of the extra space with more USB 2.0 ports would go a long way in leaving connection options for people like me who run too many devices off their PC. The other thing was a bit of a nitpick because I do like the way this board looks. But considering where this is in the market, it hardly looks any different than cheap Strix boards with the exception of that etched part.

My last concern was with the overall price. If you look at the MSRP of 369.99 independently it is a little crazy. AM4 and Z370 boards with similar features don’t run this high. But we have to remember that X299 as a whole is a more expensive platform so all of the boards are more expensive. The Strix X299-XED is actually an upper mid-range priced board when you look at what else is on the market and at its price it compares well to what else is on the market. The ASRock X299 OC Formula, for example, has the same issue with too few USB ports, has fewer ram DIMMs, and lacks the Asus software and Asus Aura functionality.

So is this the board to pick up? Well for starters, I think X299 as a platform is only good for some specific situations. AMD has done really well to snatch up a lot of the potential market share of enthusiasts with Threadripper being much cheaper, not to mention memory prices really limiting one of X299’s biggest features (quad-channel memory). But if you are locked in on X299 this isn’t a bad board. I would also suggest checking out the Asus Prime X299-A as its available right now in an open box at entry level (for X299 lol) prices. The X299-XE bridges the gap between the cheapish X299 boards and the cool boards like the Prime Deluxe. For me though, I think this might be the perfect board to give our Crush build an upgrade. I prefer Asus’s software and it has more USB 3.1 Gen 2 connections as well as the addressable RGB LED header for me to get a little crazy with my lighting. 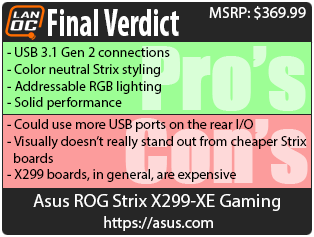 You might call him obsessed or just a hardcore geek. Wes's obsession with gaming hardware and gadgets isn't anything new, he could be found taking things apart even as a child. When not poking around in PC's he can be found playing League of Legends, Awesomenauts, or Civilization 5 or watching a wide variety of TV shows and Movies. A car guy at heart, the same things that draw him into tweaking cars apply when building good looking fast computers. If you are interested in writing for Wes here at LanOC you can reach out to him directly using our contact form.
Discuss this article
Log in to comment
Posts in discussion: Asus ROG Strix X299-XE Gaming

We have 809 guests and one member online