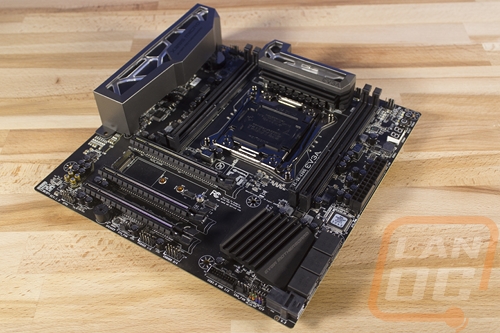 Love it or hate it EVGA doesn’t care at all about the RGB trends going on right now, just like they have avoided in the past the “gaming” focused styling. They have always done their own thing and as everyone else has gone flashy with lights they have toned things down even more. The X299 Micro Is mostly blacked out with just a few exceptions of gray. The board looks like it would be loaded up with lights, it is color neutral and it has a few accents in transparent plastic that any other company would light up. The style is simple but I dig it. Your motherboard doesn’t need to be a feature point in your build. This blacked out look should hide really well behind other components or if you put it in a bright white case it could contrast as well. If the name itself didn’t give it away, this is EVGAs X299 board in the Micro ATX form factor. This kept the name simple and tells you exactly what you need. 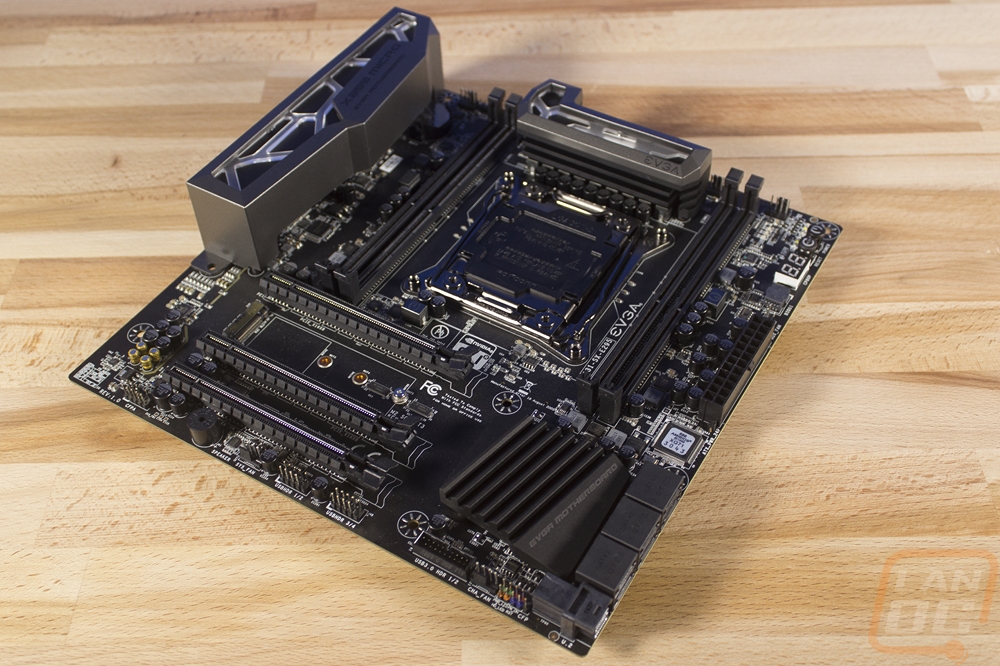 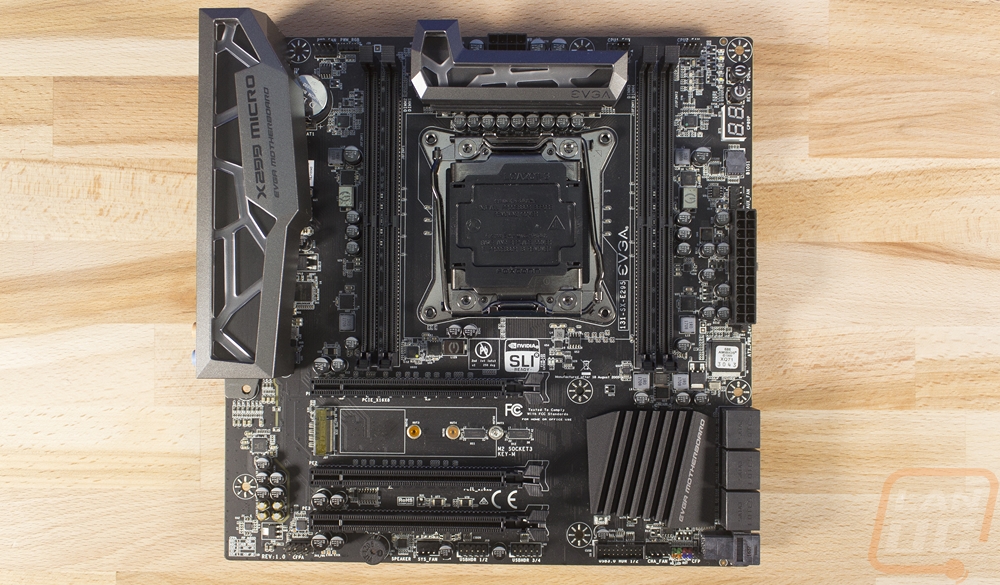 So like I mentioned before, you do have to install the included wireless AC adapter yourself as well as the rear I/O shield. You have to plug the card in and then use the two screws along with the bracket. That wasn’t too difficult but getting the tiny antenna cables on is a huge pain. That is made even more difficult because you have to attach them to the rear I/O where most other companies use a board mounted bracket so they aren’t hanging loose when the board is out of the case. Plus if you remove the board you have to remember to remove them as well. Once installed though, the I/ shield looks amazing. It has the board name on it and it is one of just two components that aren’t black. They went with gray and then up top is a transparent design that is similar to the new video card designs. I suspect modders will be getting lights on these as well. 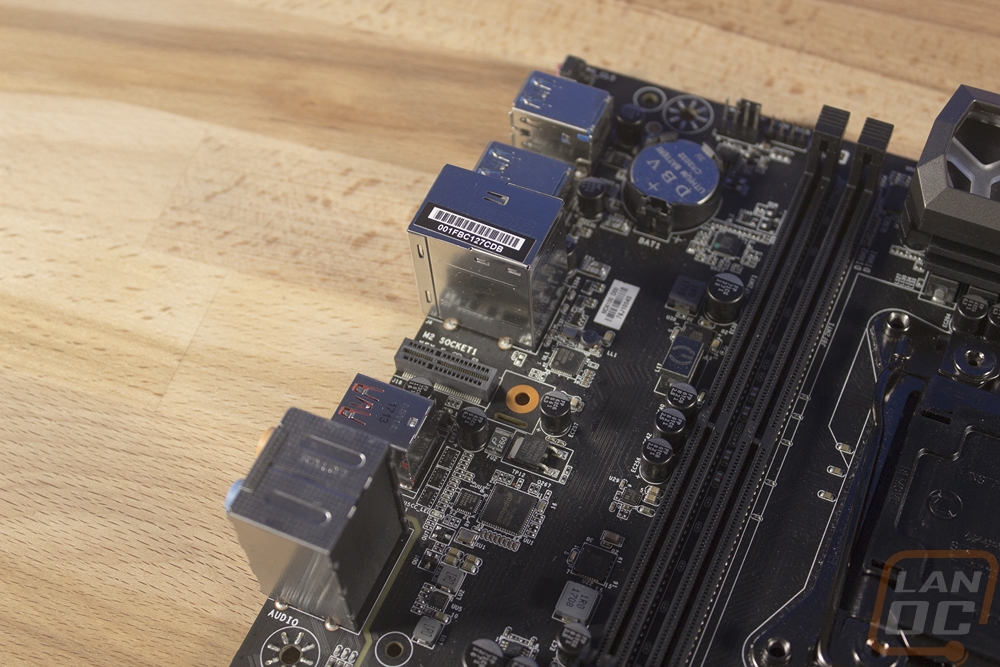 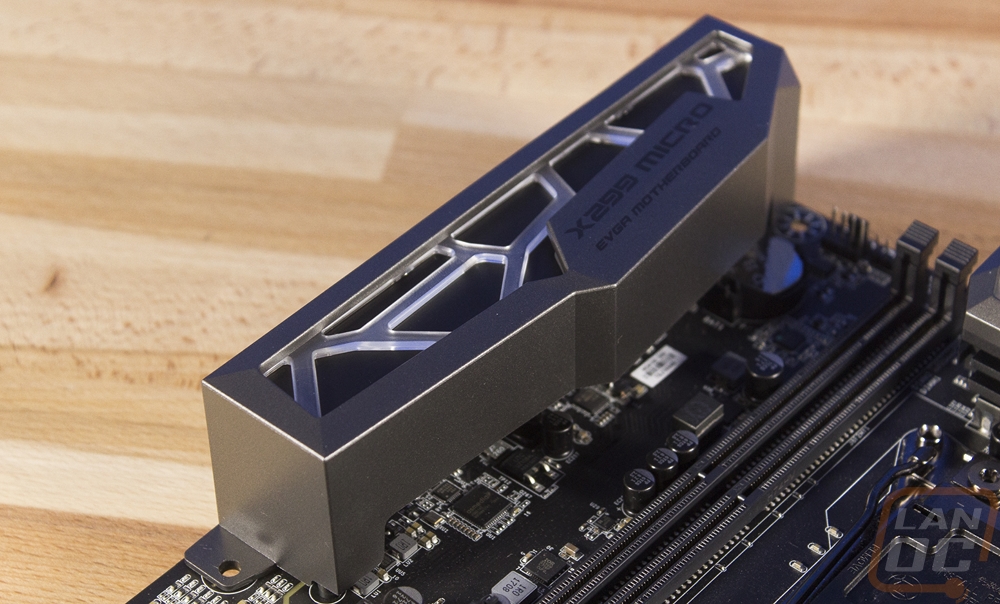 For cooling there are two heatsinks, one up above the CPU socket sitting on the power chokes and the other is down at the bottom of the board on the chipset. The choke cooler is only as wide as the CPU socket because of the quad channel memory slots on each side and if you look at it from the side there are grooves cut into the side to increase the surface area. It also has the same gray with the design on top like the I/I shield. I’m actually surprised they didn’t carry the same theme over to the chipset heatsink. It has grooves cut in the top and it is finished in a rough flat black finish. Its only accent is the EVGA Motherboard screen printed on it. 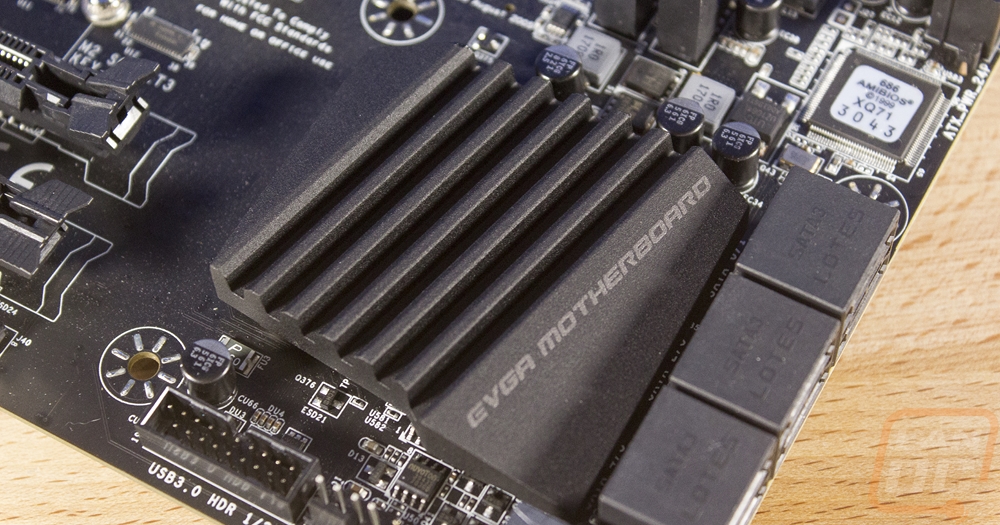 Working my way around the board, starting in the top left corner there are only a few things going on. The CMOS battery is tucked up behind the rear I/O for starters. Then just above it is a PWM fan header and then a four pin RGB header to hook up your own lighting if you want. The large LGA 2066 socket takes up a ton of room here as does the first two of the four DDR DIMM slots. Up above the heatsink though you can see that EVGA slipped in an 8-pin power connector for the CPU power. Then next to it is the PWM CPU fan header. 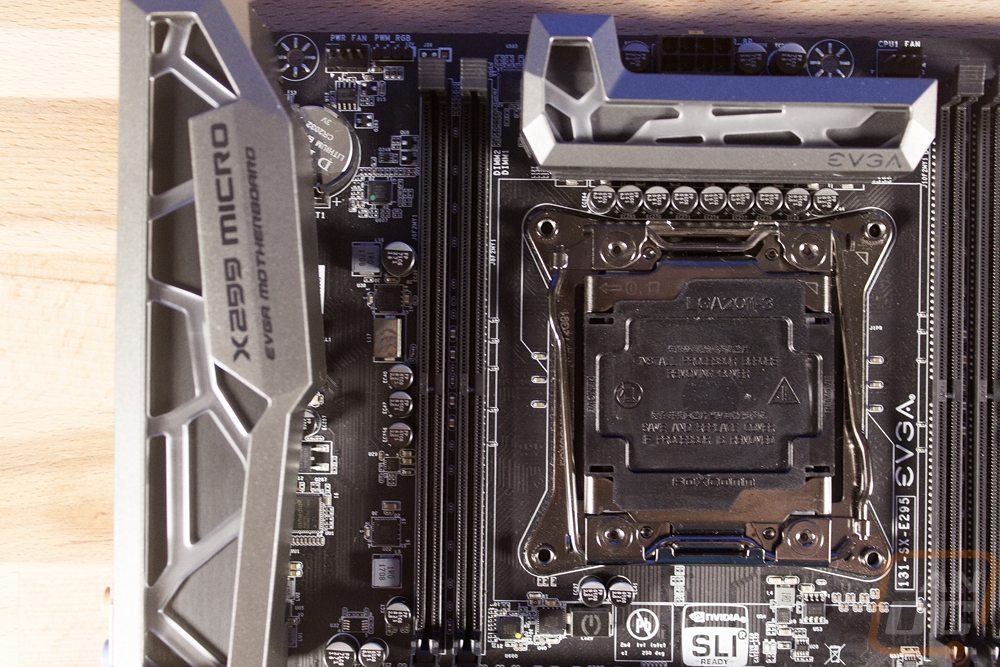 On the top right corner, we have the other two DDR4 DIMMs. Then right next to them is a second PWM CPU fan header. The topmost corner of the board near the screw hole has five different surface mounted LEDs that help show what the problem is if your PC doesn’t boot. Just below them are the labels letting you know what each does. Then right next to them you have power and reset buttons on the board. EVGA is big into overclocking and with overclocking these help a lot. I know I prefer them when testing as well but even normal users can put them to use sometimes. Say for example your PC won't boot when you first hook everything up, pressing this power button might show you have the front I/O connection hooked up wrong. Just below them is an LED readout for more diagnostics and after booted it shows your CPU temperature. There is another PWM fan header just above the 24-pin motherboard power plug. If you look really close you can also see a small surface mounted component with the EVGA logo on it as well. 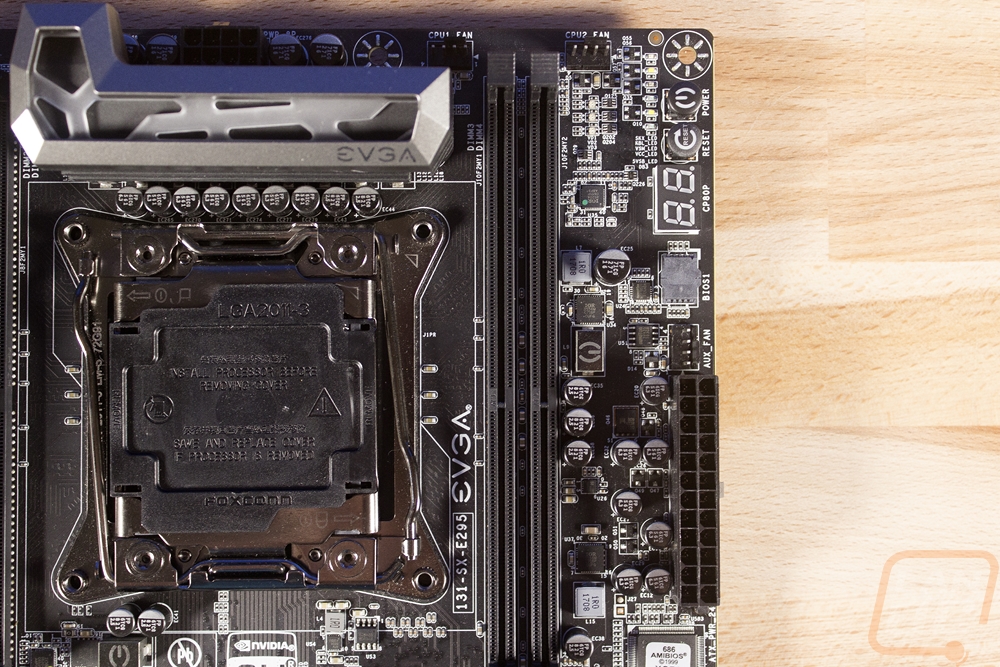 Being mATX this isn’t a big board so the bottom right corner does have the chipset heatsink taking up a lot of the space. EVGA did still fit in four right-angled SATA connections on the right edge as well as a new U.2 port. I love that board manufacturers seem to be on board with U.2 even though there aren’t many drives out. Down on the bottom edge are a few more connections. This is where they have tucked away the front I/O connections. They are color coded to make figuring out where to plug everything in easier. Next to them is our fifth PWM fan header as well as a standard USB 3.0 internal header. I would have liked to of seen a second new USB 3.1 header as well to make things a little more future proof but those are still slow to come out right now in cases. 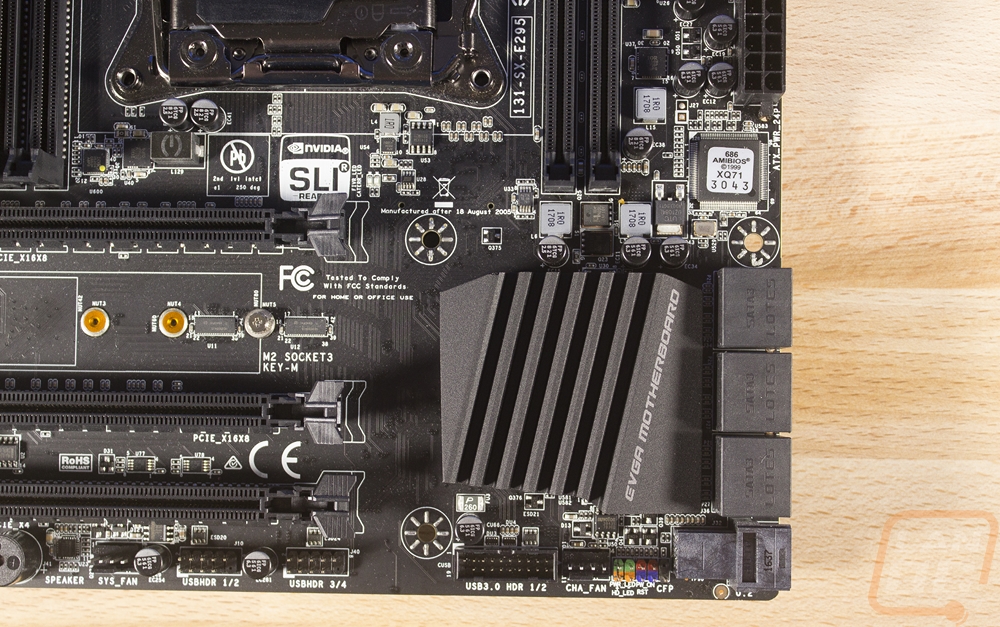 Continuing along the bottom left edge there are two USB 2.0 headers and then a sixth and final PWM fan header. You can’t say EVGA skimped on fan headers that’s for sure. The board actually has a speaker built in, almost always anymore it seems like the speaker is just a header connection forcing you to go without or to use an unsightly one hanging off the board. Then over on the left is the front panel audio connection.

EVGA did partially separate their audio circuitry, from the rear I/O panel down to just under the bottom right cap. Speaking of the used high-quality Japanese caps. Most of the bottom left corner is filled up with PCI based things though. There is a PCIe x4 M.2 slot below the top PCIe slot but I should also note that the wireless adapter plugs into a second E key M.2 slot should you really need two. Then there are three PCIe x16 length slots. I was a little confused about the layout. On the board, they are marked as x16 or x8 slots for the top two and x4 for the bottom. The specifications say 2x16 and 1x16. I read that as you get full x16 on the top two. I’m assuming the difference is if you are running Skylake-X or not. Kaby Lake-X with its lower lane count forces the drop down, not that x8 isn’t more than enough still honestly. 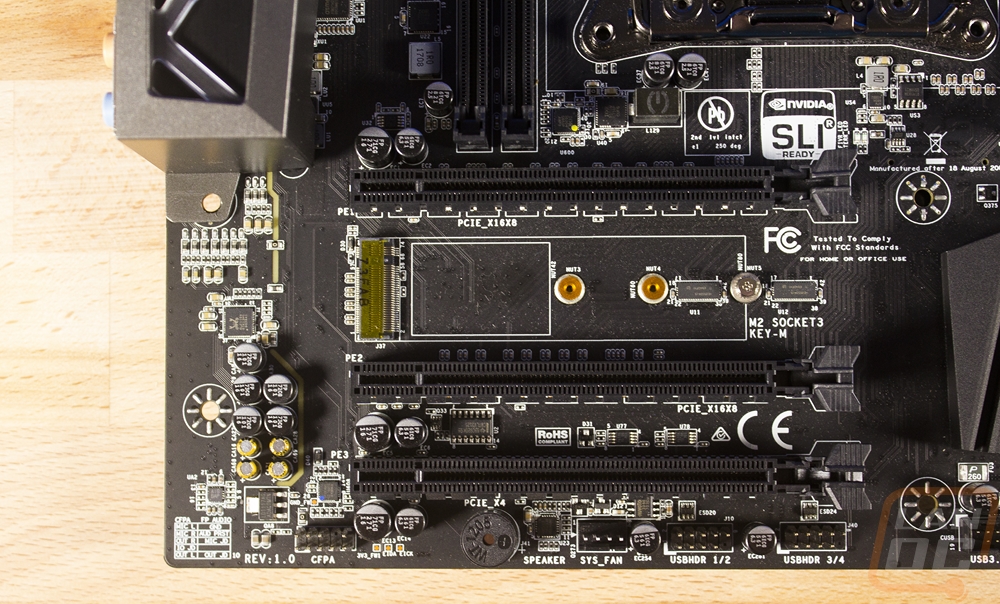 Like most EVGA boards the rear, I/O is also a little bare. So you have a clear CMOS button over on the far left. Then you get six USB 3.0 ports. They used Intel for the wired NIC and the wireless one that you install yourself. Then you have a single Type-C and Type-A, both running USB 3.1 Gen 2. Then on the right is your standard 5 port audio array with the optical port.

Flipping the board over to check out the back of the PCB we mostly just see more black. The two heatsinks are both attached with screws though, that is good news if you need to remove them for any reason. From this side, we can also see that the split PCB for the audio chipset also has a half inch wide gap in the break for some reason. 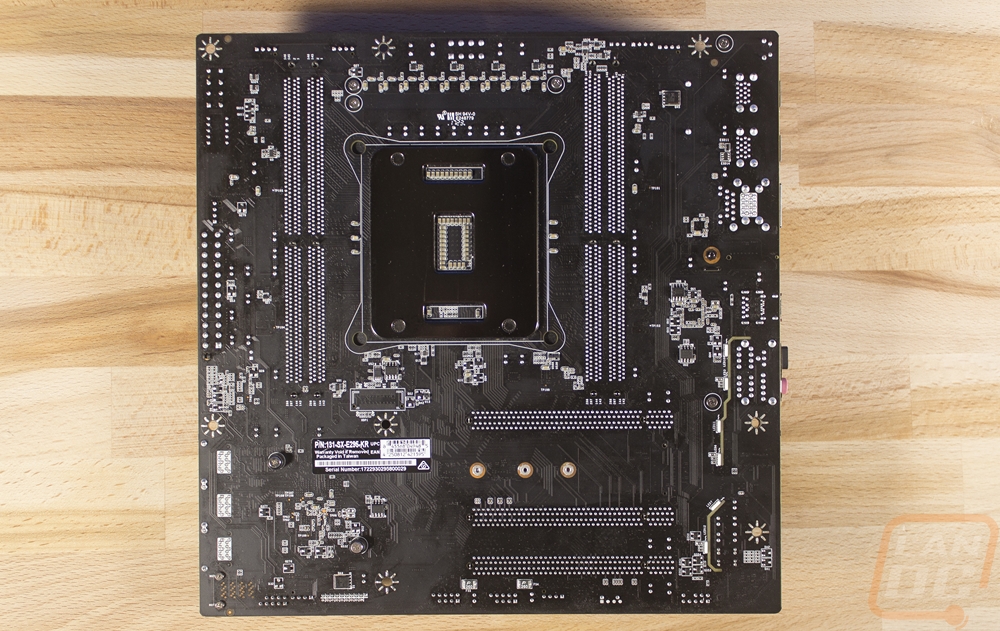 We have 700 guests and one member online