In addition to the Z87-G45 Gaming, it’s clear that MSI is looking to change things up in their motherboard lineup. The MPower is a good example of this. While going through the board topology and its features I found myself extremely impressed with what MSI did with the MPower. First the black PCB goes along great with the black and yellow cooling design but what is most impressive is that they removed all of the logos and blacked out everything they could on the board. This looks amazing by itself and is going to look good inside of a case with clean wire management. I even got a chuckle when I found all of the logos on the back of the motherboard because you know somewhere there was someone saying "they never said we had to put the logos on the TOP of the motherboard”. 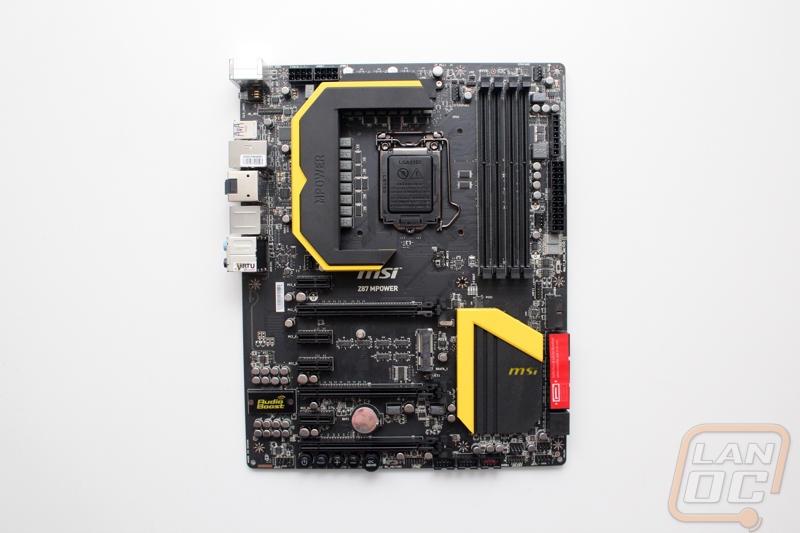 MSI even took a few tips from Asus when it came to the onboard audio by trying to split it off with PCB separation. On top of that they included a headphone amp, something that I would love to see on every motherboard personally. I do think they hiccupped a little when they went with the Killer Networks network card. Everyone associates this with gaming and because of that we see some premium boards going with it as a feature. But my past experiences with their cards have me a little gun shy as they tend to cause weird issues and fail in every situation that I have used them. I personally would have rather seen them go with an Intel NIC.

MSI also upgraded their software suite to their new Command Center. Command Center was easy to use and gave me quick access to tweaking my overclock right in windows. MSI even bundled RAMDisk in the software as well, this is software that would normally run you $30 to $40 if you had to pick it up. Along with that MSI bundled Norton, Trend Micro SafeSync, and a whole list of free programs as well.  The new Click BIOS 4 was packed full of functionality as well. I was really impressed to see its evolution although I did have a couple small issues that I hope they consider fixing in future BIOS updates. The only thing their software suite is missing now is a USB 3.0 boosting application to help push the USB 3.0 performance up to what we have seen from the competition using USB 3.0 boosts. 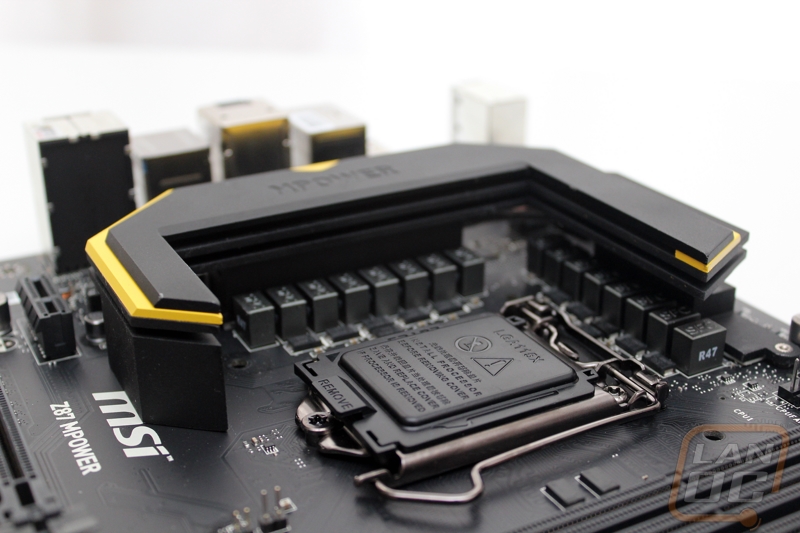 When it is all said and done I was extremely impressed with the MPower. I think if MSI continues on this path they are going to be finding their way into more and more enthusiast’s PC’s. They are really onto something with the ultra-clean PCB design. A lot of people take into account the styling and how a motherboard will go with their overall build and MSI is recognizing that. In fact I have a few ideas myself that involve this board, I don’t need another PC sitting around but I am seriously considering putting something together just to put this board and my ideas to use. 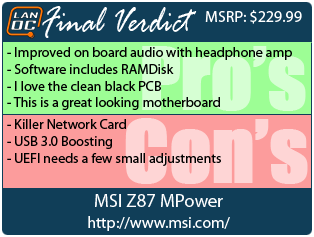 You might call him obsessed or just a hardcore geek. Wes's obsession with gaming hardware and gadgets isn't anything new, he could be found taking things apart even as a child. When not poking around in PC's he can be found playing League of Legends, Awesomenauts, or Civilization 5 or watching a wide variety of TV shows and Movies. A car guy at heart, the same things that draw him into tweaking cars apply when building good looking fast computers. If you are interested in writing for Wes here at LanOC you can reach out to him directly using our contact form.
Discuss this article
Log in to comment
Posts in discussion: MSI Z87 MPower

lonkny replied the topic: #31387 08 Jun 2013 22:52
Thanks for the informative review! One page that confuses me is the USB3/SATA3 page ... the chart states SATA Read speeds of 268MB/sec as compared to the other MSI & Asus boards around 430+... In your description, you state that this is due to Asus' USB 3 Turboboost technology, but we are talking about SATA here... In other reviews, the SATA Read speed for the MPower is in line with other boards:

I think it may be that the headings are backwards - are the first sets of numbers for USB and the 2nd set for SATA? Please clarify, thanks!

lonkny replied the topic: #31393 09 Jun 2013 07:27
Thanks, makes much more sense now... I think I may pull the trigger on this board... especially liking the mSATA, bluetooth and other gimmicky features LOL - seems like the other Z87 boards in this price range all perform about the same with very similar feature sets, so it really comes down to incidentals...

We have 965 guests and one member online